Bronchitis is one of the top 10 conditions for which people seek medical care. It’s an uncomfortable ailment that leaves you coughing for weeks (or more) and comes with plenty of mucus. Although many physicians treat bronchitis with antibiotics, a majority of cases are caused by viruses and antibiotics are completely ineffective. Try using some safe and natural remedies. They can help to reduce swelling in the bronchial tubes and relieve your sometimes painful cough.

Bronchitis is the inflammation of the bronchial tubes, the tubes that carry air to your lungs. This condition causes you to cough persistently, sometimes making it hard to breathe. The coughing may even lead to chest pain and wheezing. Bronchitis is also known as a chest cold because it usually occurs after you’ve already experienced symptoms of the common cold.

About 5 percent of adults self-report an episode of acute bronchitis each year. Up to 90 percent of them seek medical advice. In fact, bronchitis is the fifth most common reason why adults see their general practitioner. (1)

The main symptom of acute bronchitis is a persistent cough. This cough lasts until your bronchial tubes heal and the swelling goes down. The cough lasts for less than 3 weeks in 50 percent of patients. But for 25 percent of patients it may last more than one month. Because bronchitis usually develops after you’ve already had a cold or flu, you may also experience typical cold and flu symptoms, such as:

When you cough, you may produce a clear mucus, or slimy substance; if the mucus is a yellow or green color, that’s a sign that you have a bacterial infection as well.

Other symptoms of acute bronchitis include wheezing (a whistling or squeaky sound when you breathe), chest tightness or pain, lower fever and maybe even shortness of breath, especially during physical activity. (2) 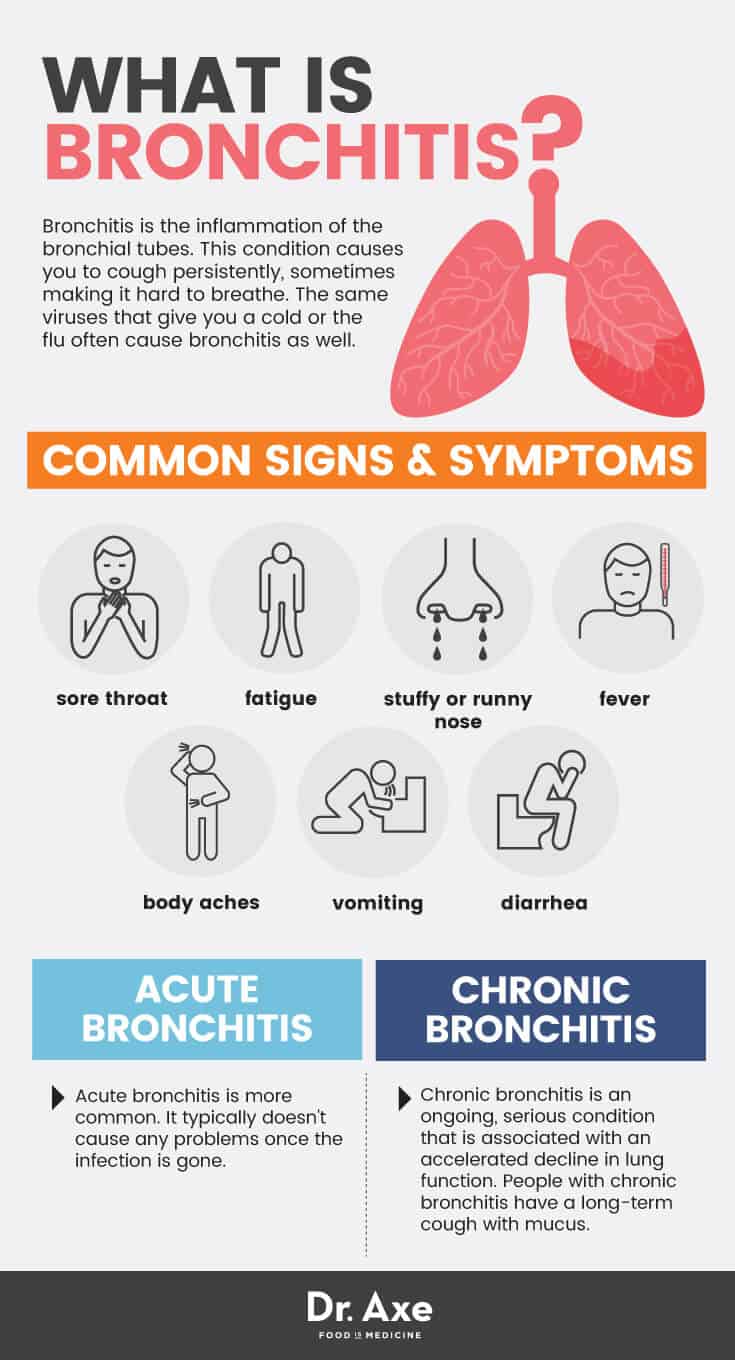 Chronic bronchitis is an ongoing, serious condition that is associated with an accelerated decline in lung function. It occurs if the lining of the bronchial tubes is constantly irritated and inflamed. People with chronic bronchitis have a long-term cough with mucus. Sometimes, viruses or bacteria can infect the already irritated bronchial tubes, making the condition even worse.

Smoking is the main cause of chronic bronchitis. So, the first line of treatment is to quit smoking and avoid secondhand smoke. In fact, research shows that approximately one-quarter of smokers can be affected by clinically significant chronic obstructive pulmonary disease (COPD). COPD is a respiratory disease characterized by abnormal inflammatory response in the lungs and restricted airflow. (3)

The same viruses that give you a cold or the flu often cause bronchitis as well. Sometimes bacteria are the cause. Research suggests that 85 percent to 95 percent of cases of acute bronchitis are caused by viruses, the most common being rhinovirus, adenovirus, influenza A and B, and parainfluenza. When bacteria is the cause of bronchitis, it is usually in people with underlying health problems. (4) In both cases, your body tries to fight off the germs and, as a result, your bronchial tubes swell and make more mucus, which causes smaller openings for air to flow and makes it harder to breathe.

People with a weaker immune system, such as elderly people, infants and young children, are at a higher risk of developing acute bronchitis than people in other age groups. Chronic bronchitis occurs more often in people older than 45, but it can develop at any age.

Many adults who develop chronic bronchitis are smokers or live with a smoker. A study published in Current Opinion in Pulmonary Medicine indicates that over 40 percent of smokers will develop chronic bronchitis in their lifetime. Researchers found that smokers may reduce their risk of developing COPD symptoms with physical activity and increase their survival by smoking reduction. (5)

Other factors, such as contact with dust, chemical fumes and vapors from certain jobs, also increase your risk for bronchitis. This includes jobs in coal mining, grain handling, livestock farming and textile manufacturing. Some people may develop bronchitis because of a reaction to allergies or food intolerances as well.

Research shows that 85 percent of patients will improve without specific bronchitis treatment. Some systematic reviews found no benefit from using antibiotics, as most bronchitis cases are viral. (6)

Bronchodilators are sometimes used to widen the air passages by relaxing the bronchial smooth muscle. Bronchodilators are commonly used for asthma, COPD, allergic reactions and other conditions that cause breathing problems. It is used for more severe cases of bronchitis in people who show evidence of bronchospasm. It does come with some side effects, including headaches, nausea, upset stomach and flu-like symptoms.

Over-the-counter pain relievers, such as ibuprofen, aspirin and acetaminophen are sometimes used to relieve pain and fever associated with bronchitis. You have to be careful with these types of drugs because you may take too much without even realizing it. Acetaminophen, for instance, is in several common over-the-counter brands that you may take in combination. Just like the side effects of taking too much aspirin or ibuprofen overdose, an acetaminophen overdose can lead to liver failure, coma and even death.

Anytime you are trying to fight an infection, whether it’s viral or bacterial, you should focus on eating anti-inflammatory foods that will help to strengthen your immune system and reduce internal swelling. Eat plenty of raw fruits and vegetables, which will provide important vitamins and minerals and won’t produce mucus. Bone broth is another healing food that will supply essential vitamins and minerals, helping you to get well quickly.

It’s also helpful to eat probiotic-rich foods because they boost immune function and replenish the healthy bacteria in your gut, which is necessary if you are on antibiotics. Some excellent options include kefir, cultured vegetables (like sauerkraut and kimchi), kombucha, coconut kefir and cultured yogurt.

There are also some foods that you should avoid because they are mucus-producing, including conventional dairy, sugar and fried foods.

Drinking plenty of water throughout the day will help to thin the mucus in your bronchial tubes, reducing your cough and making it easier to breathe. Drink a glass of water about every 2 hours. It’s also helpful to add some Manuka honey to a drink to help with the cough.

A humidifier can help to loosen mucus and relieve wheezing and limited air flow. A 2014 study published in Value in Health suggests that humidification therapy is cost-effective and effective for patients with chronic obstructive pulmonary disease. (7) Use one in your bedroom throughout the night until your bronchitis symptoms have cleared.

The most important step you can take to reduce your chances of developing bronchitis is to quit smoking or don’t start smoking. Multiple studies have found that the risk of chronic bronchitis is significantly higher in current smokers than in people who have never smoked. However, research also shows that approximately 5 years after quitting, chronic bronchitis risk in past smokers approached that in non-smokers. (8) If you do smoke, talk to your doctor about programs and products that can help you quit.

It’s also important to try to avoid secondhand smoke and other lung irritants, such as dust, vapors, fumes and air pollution.

To do purse-lips breathing, breathe in through your nose for about 2 seconds, pucker your lips like you’re getting ready to blow out a candle and then breathe out very slowly through pursed-lips, two to three times as long as your breathed in (about 4 seconds).

N-acetlycysteine helps to decrease the severity and frequency of coughing attacks and improves overall lung function by increasing glutathione levels and thinning bronchial mucus. Supplementing with NAC will help to thin your phlegm so that it’s easier to expectorate. A 2015 study shows that a dose of 1,200 milligrams per day can be used to prevent exacerbations for patients with chronic bronchitis, and when the patient does not have airway obstruction, a regular treatment of 600 milligrams per day is sufficient. (10)

Many of echinacea’s chemical constituents are powerful immune stimulators and provide significant therapeutic value. Many studies show that echinacea has the ability to fight the common cold with its antiviral properties, cutting the chances of catching a cold by 58 percent. It also helps to reduce cold symptoms, which are also common complaints by people suffering from bronchitis. (11) Instead of using over-the-counter medications to relieve pain associated with bronchitis, you can use echinacea to ease a sore throat or headache instead.

Vitamin C helps to boost your immune system and it decreases the severity and duration of colds and other respiratory issues caused by viruses. You can take 1,000 milligrams of vitamin C per day to fight off oncoming cold symptoms, or take 4,000 milligrams per day to get rid of a cold that is already in your system. (12) Because bronchitis usually starts out as the common cold, use vitamin C to address the issue before it becomes a bigger problem.

Astragalus root is one of the most powerful immune-building plants on the planet. It helps to strengthen weak lungs and increase the body’s ability to fight infections; however, it is not recommended with a fever. Although the full extent of the herb’s capabilities are yet to be determined, there is sufficient evidence to suggest that astragalus can be used as an adjunct therapy for boosting the immune system and fighting conditions like bronchitis. (13)

Ginseng is an herbal supplement that can help to improve lung function, which is why it’s commonly used to treat respiratory conditions like asthma. It has the power to decrease lung bacteria and treat chronic obstructive pulmonary disease. It also reduces inflammation and boosts immune function. (14)

Eucalyptus oil can be very helpful for people with bronchitis. The main constituent of eucalyptus, cineole, can reduce exacerbations and shortness of breath, while improving lung function. Research also suggests that cineole is an active controller and reducer of airway inflammation. (15)

You can make a steam bath with eucalyptus oil. Pour a cup of boiling water into a bowl and mixing in 10 drops of oil. Then place a towel over your head as you lean over the bowl and inhale deeply for 5–10 minutes. You can also apply 2–3 drops of eucalyptus oil and equal parts coconut oil directly to the chest as a vapor rub.

Peppermint oil gives a cooling sensation and has a calming effect on the body. It also has antimicrobial properties and the power to clear the respiratory tract. To relieve bronchitis symptoms, inhale peppermint oil directly from the bottle. This will help to unclog your sinuses and ease your sore throat. You can also apply 2–3 drops of peppermint oil to the chest with a warm compress. (16)

See your doctor if your bronchitis symptoms last longer than three weeks or if your cough brings up blood or mucus that is thicker and darker.