You may equate wild rice with lower-quality rice, but the truth is that this less common rice actually provides numerous health benefits.

For starters, it’s slightly higher in protein than most whole grains and is a good source of fiber, folate, magnesium and a slew of other beneficial nutrients.

Plus, like black rice, it’s better for your waistline and overall health than most grains that are filled with refined carbohydrates.

In fact, evidence points to wild rice being able to potentially reduce birth defects, improve bone health and so much more. So let’s dig in to see why you should include wild rice in your diet.

What Is Wild Rice?

Wild rice (Zizania aquatica or Zizania palustris) is a semi-aquatic grass that grows in water, such as lakes, rivers and bays, between two and four feet deep.

It originated in the upper Great Lakes of U.S. and Canada and is one of the two most common “grains” native to North America — with the other being corn.

There are two other varieties of wild rice called Zizania texana, grown in the San Marcos River area just north of San Antonio, Texas, and Zizania latifolia, a variety found in Asia and noted more as a vegetable due to its greens.

Wild rice has grown in the wetlands of North America for thousands of years. It germinates in the cold mud under water, then grows throughout the short northern season until reaching maturity.

It’s pretty amazing, with the ability to survive migrating birds and early frosts by ripening its seeds at different times. Though that presents challenges to the harvesting process, it also presents new opportunities as threats arise.

As a high-antioxidant food, wild rice is able to fight chronic diseases, such as coronary heart disease, stroke and potentially even some forms of cancer.

The antioxidant activity of wild rice methanol extract was studied in research published in the Journal of Agricultural and Food Chemistry along with the journal Food Chemistry and was found to be up to 10 times greater than that of white rice, making it a great food to fight free radical damage.

The findings showed that wild rice is abundant in phenolic acid followed by sinapic acid, a naturally occurring phytonutrient.

Phenolic acids are found in plants, and since wild rice is considered a grass, it lands in this category, playing a protective role against diseases such as coronary heart disease, stroke and cancers, among other chronic disease.

Folate is a member of the B vitamin family and naturally occurs in some foods, mainly leafy green vegetables. Wild rice is a great source of folate as well, which provides many benefits in and of itself.

Folate is needed during rapid cell division and growth, which is why it’s important during pregnancy. In fact, pregnancy can actually double the need of folic acid foods.

So to help ensure a healthy pregnancy, focus on consuming plants and wild rice to get your folate, instead of counting on folic acid supplements when possible.

Wild rice is a food high in phosphorous, and phosphorus is known to help eliminate the weakness of bones and reduce the risk of stress fractures.

Studies were conducted at the University of Michigan by adding calcium and phosphorus supplements to the diet of subjects with the intention of preventing decreases in bone mass and structural strength during a short-term exercise program versus with exercise alone.

Results indicated that by increasing dietary mineral consumption, especially during an exercise program, increases in bone mass were evident, which greatly aided in the resistance of stress fractures.

This shows that phosphorus-rich foods like wild rice can strengthen bones and improve bone health overall. 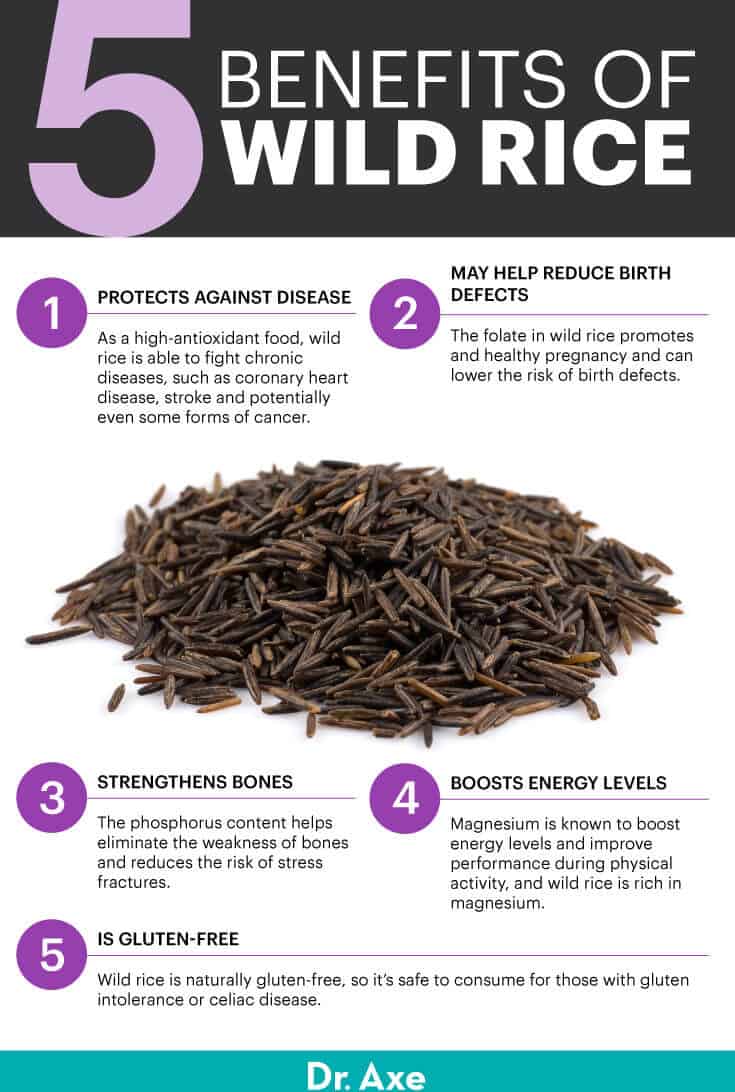 Wild rice contains the important mineral magnesium. By adding magnesium-rich foods into your diet, you may be able to help the body create energy by activating the adenosine triphosphate (ATP).

With enough ATP, you can help prevent fatigue, not just from day to day activities, but even when exercising because it’s usually harder for the cells to gain oxygen. During exercise, there is an increase in demand for oxygen, which is met by increasing muscle blood flow.

A study by physiologist Henry C. Lukaski and nutritionist Forrest H. Nielsen displays what happens when the body is depleted of its magnesium levels and how it affects our energy metabolism. The lack of magnesium is associated with a need for increased oxygen during exercise.

During moderate activity, participants in the study who had low magnesium levels in the muscle were likely to use more energy, causing them to become exhausted more quickly than those with the positive magnesium levels. Basically, since magnesium, or ATP, helps provide this much-needed energy, if you’re lacking, energy levels are likely to be depleted far faster.

Wild rice, like brown rice, is naturally gluten-free, making it a great option for those with gluten intolerance or celiac disease. Eating gluten-free can help promote a healthier overall diet if unhealthy foods with gluten are replaced with healthier options.

Gluten is a type of protein found in grains such as wheat, barley and rye, making up about 80 percent of the amino acids found in these grains. However, since it’s difficult to digest for many, avoiding it may be best.

Although grains or grain substitutes such as brown rice, oats, quinoa, rice or corn are gluten-free, research suggests that food-processing techniques may contaminate these foods with gluten.

Make sure you’re educated about each food’s source if gluten is a concern for you. Read labels carefully, be knowledgeable of the brand or contact the company or manufacturer.

One cup of cooked wild rice contains about:

Both wild rice and black rice are rich in antioxidants, fight chronic disease and are gluten-free — however, there are some distinct differences between the two. Both wild rice and brown rice and rich in nutrients, especially protein and manganese. They are both gluten-free foods that boost heart health, promote bone health and increase energy. Both foods are rich in antioxidants and are considered healthy options, especially when compared to white rice.

That being said, there are also some differences between the two foods.

Cooking wild rice is not difficult. Like cooking brown or black rice, it does need to be simmered for a while, but it’s low maintenance. You can make a large quantity at once and keep it for the week. Meal prepping like this will make it easier for you to choose healthy options when you’re planning lunch and dinner.

Check the label for instructions, but generally, to cook wild rice, follow these steps:

Since it’s low in fat, uncooked wild rice can be kept indefinitely in a dry, airtight container. This is the perfect staple to keep in your cabinet and use to make a balanced, nutrient-dense meal.

Cooked, drained and tightly covered wild rice can be stored in the refrigerator for up to a week and the freezer for up to six months, making it perfect for meal planning.

This is a great recipe that is easy to make by preparing ingredients ahead of time. You can add grilled chicken if you’d like as well.

Here are a few more wild rice recipes to try:

The Anishinaabeg peoples, among others, have traditionally harvested wild rice in canoes powered only by long poles. They used beater sticks to knock the ripe seeds into the bottom of their canoes, where they collected their harvest.

While that may seem archaic, it’s still practiced today, believe it or not. Uncultivated Minnesota wild rice, notably “wild” wild rice, is required by law to be harvested in the traditional Native American way by those who are licensed.

Maintaining this authenticity is great, but not practiced by all. Farmers in California, where 70 percent of wild rice is grown, have commercialized the process.

As the wild rice takes root, the stem becomes weak. Its leaves float on the surface of the water, offering support — however, if the water suddenly deepens from floods, the small roots can be easily torn.

On the flip side, if the water suddenly becomes more shallow, which can easily happen in parts of California due to drought, the stem may not be strong enough to support the plant, so the early stages of development are most crucial.

If the plant survives, it becomes much stronger and can eventually support the plant as it grows above water level. In late August and early September, farmers prepare special combines can collect the ripe “grains.”

Once the grain has been collected, there’s more work to do to prepare it for cooking. Historically, Native Americans parched the green seeds in large pots over open fires, then packed them away in birch-bark baskets.

Today, commercial wild rice farmers allow the rice to cure until the chlorophyll dissipates, at which point they dry the kernel while it’s still in its hull. This is where it gets its nutty, smoky taste. Then the inedible hull is removed, and the black wild rice kernel is exposed and prepared for commercial distribution.

While wild rice is mostly known as being grown in the Great Lakes and California, it’s actually found naturally in most of the U.S. and Canada, and it’s now grown in Hungary. Since it’s a tough “grain” to produce, it’s often priced higher than many other grains. However, producers attempt to keep the price down by blending it with white rice and brown rice.

Here are a few more interesting facts about wild rice:

Wild rice is generally considered safe when consumed in appropriate amounts by humans. Although it’s considered gluten-free, it may be problematic for people with celiac disease because of cross-contamination.

Another potential wild rice risk is ergot, a toxic fungus that can cause nausea, vomiting, headaches and digestive problems when eaten.

Generally, eating small to moderate amounts of this rice is not a concern. And of course, you’ll want to purchase this grass from a reputable company that uses organic practices.