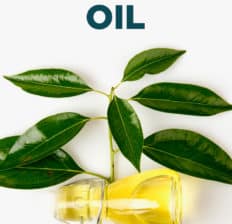 Extracts from the camphor tree have been coveted since ancient times. Camphor was used traditionally as a fumigant during the era of the Black Death, and it was a valued ingredient in perfumes and embalming fluid.

Today, the tree’s extract is used topically in body care products for relieving pain, inflammation and skin irritation. It is one of the most well-known and widely used aroma chemicals, but it can only be used topically.

What Is Camphor Oil?

Camphor oil extracted from the wood of camphor laurel trees (Cinnamomum camphora) with steam distillation. The extracts are used in a range of body products, including lotions and ointments.

It’s used similarly to capsaicin and menthol, two agents that are commonly added to lotions and ointments for pain relief.

Camphor is a waxy, white or clear solid that has a strong aromatic odor. Its terpene constituents are often used on the skin for their therapeutic effects.

Eucalyptol and limonene are two terpenes found in camphor extracts that are widely researched for their cough-suppressing and antiseptic properties.

Camphor oil is also valued for its antifungal, antibacterial and anti-inflammatory properties. It’s only used topically, as internal use can be toxic.

Camphor oil comes in different colors that distinguish what types are safe for therapeutic use. Only white camphor oil, which is clear or has a milky color, is safe for topical application.

Camphor oil may also be yellow or brown, which means that it has high levels of safrole, a compound that has carcinogenic effects and has been banned by the U.S. Food and Drug Administration.

Anything but white camphor oil should not be used because it may be toxic.

Camphor has antibacterial and anti-inflammatory properties, making it a natural agent for fighting skin infections. It’s often used optically to soothe skin irritations and itchiness and speed up wound healing.

Camphor is often used in sprays, ointments, balms and creams for relieving pain. It’s able to reduce swelling and pain that affect muscles and joints, and studies show that it’s used to alleviate back pain and may stimulate nerve endings.

It has both warming and cooling properties, allowing it to relieve stiffness and ease discomfort.

It’s also a natural anti-inflammatory agent, so it’s used to ease muscle and joint pain that’s caused by inflammation and swelling. It’s also known to stimulate circulation and has been shown to interact with sensory nerve receptors.

A 2019 study published in Toxicological Research indicates that camphor extract is able to alleviate allergic skin inflammatory responses. For the study, mice were treated with C. camphor leaves on atopic dermatitis.

Research indicates that pure camphor is an effective antifungal agent. A clinical case series found that Vicks VaborRub, a product that’s made with camphor, menthol and eucalyptus, is a safe and cost-effective alternative for treating toenail fungus.

Another study concluded that camphor, menthol, thymol and oil of eucalyptus were the most effective components against fungal pathogens.

C. camphora is often used in chest rubs to help ease coughs in both children and adults. It works as an antitussive, helping reduce congestion and alleviating consistent coughing.

Because of its dual warm and cool effects, it can be rubbed into the chest to ease cold symptoms.

A study in Pediatrics compared the efficacy of vapor rub containing camphor, petrolatum and no treatment for children with nighttime cough and cold symptoms.

The study survey included 138 children aged 2–11 who experienced cough and cold symptoms, leading to difficulty sleeping. Comparisons demonstrated superiority of the camphor-containing vapor rub over no treatment and petrolatum.

Camphor has antispasmodic effects, so it can be used to relieve muscle spasms and issues like restless leg syndrome, leg stiffness and stomach cramping. Animal studies show that camphor oil works as a relaxant and can reduce smooth muscle contractility.

When used appropriately, following the product directions, C. camphora extracts are considered safe when applied on the skin.

While topical use has its benefits, camphor is considered a very toxic substance, and there have been numerous documented cases of camphor poisoning. If ingested, it can cause seizures, confusion, irritability and neuromuscular hyperactivity.

It is not safe to apply camphor oil and products containing the compound to broken or injured skin. If it causes skin irritation or redness, or leads to respiratory problems like coughing, discontinue use immediately.

It’s also important to keep the potent oil away from your eyes.

Do not heat products containing the oil, as it can explode or even burn the skin if applied afterward.

Cinnamomum camphora is available in several forms, but it’s always used topically. Internally use can be toxic and even lead to death.

It is used as an ingredient in some well-known products, including Tiger Balm, Bengay, Icy Hot and Vicks VapoRub. It’s used in a range of topicals, including:

The dosage varies depending on the form. Topical ointments are generally made with 3% to 11% camphor, and for cough rubs, a 4.7% to 5.3% ointment is commonly recommended. Do not exceed 11% in topicals unless advised otherwise by a health care professional.

How to Get Rid of Jock Itch: 9 Natural Remedies
3

Can you imagine a daily routine that only takes five minutes, has ...
Read More
Dr. Axe on Facebook 4405 Dr. Axe on Twitter 5 Dr. Axe on Instagram Dr. Axe on Google Plus Dr. Axe on Youtube Dr. Axe on Pintrest 540 Share on Email Print Article 5K

Microneedling Benefits for the Skin & How It Works

Do you throw our your coffee grounds? Stop! There are tons of ...
Read More
View All
Ad