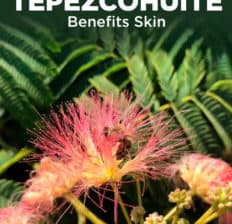 We’re always looking for the next best natural skin care ingredient that will promote healthy aging and improve the appearance of our skin. It’s common to look to plants and trees used in traditional medicine, and tepezcohuite is a perfect example.

Traditionally used in Mexico and Brazil for its wound- and burn-healing properties, tepezcohuite is recently getting attention for its anti-aging and nourishing effects. Although there are barely any human trials on the ingredient, there are promising anecdotal reports that have people buzzing about tepezcohuite.

Tepezcohuite grows in Mexico and Brazil. It has been used for thousands of years, including by the Mayans, to treat burns. Back then, the bark of the tree was ground by hand into a powder and applied topically to the wound.

Tepezcohuite is known for its antibacterial properties, which allows it to support wound and ulcer healing. The tree’s bark has been used for this purpose for thousands of years, and there’s recent research to back it up.

A controlled clinical trial involving patients with venous leg ulcers (sores in the skin that can make months to heal) evaluated the efficacy of tepezcohuite for ulcer healing. The treatment group received an aseptic washing followed by topical application of a hydrogel containing M. tenuiflora extract, and the control group received the washing and a hydrogel with no plant extract.

After 13 weeks, ulcer healing was determined through measurement of the lesion area. In the treatment group, ulcer size was reduced by a mean value of 92 percent, and all patients in the group exhibited improvements. In the control group, only one patient displayed therapeutic effectiveness.

Extracts from the bark of Mimosa tenuiflora are widely used for burn and wound healing in middle and South America. An in vitro study published in the Journal of Ethnopharmacology suggests that tepezcohuite extracts promote the reproduction of cells, which does speed up burn and wound healing.

Tepescohuite has antioxidant and anti-inflammatory properties, making it a useful tool for promoting healthy aging and improving the appearance and texture of your skin. It’s known to have soothing, nourishing effects, and it works as a natural moisturizer.

Although more research is needed to prove its efficacy, some people use M. tenuiflora to reduce the appearance of scars, too.

A 2016 study published in PloS One found that Mimosa tenuiflora extract exhibited pain-relieving and anti-inflammatory effects. Researchers suggest that the extract has antinociceptive properties, meaning that it’s able to block the detection of a painful stimulus by the sensory neurons.

Tepescohuite is used for wound, burn, lesion and ulcer healing because of its antimicrobial properties and ability to accelerate cell proliferation. An in vitro study indicated that M. tenuiflora extracts inhibited the growth of gram positive and gram negative organisms, yeasts and dermatophytes.

While the potential benefits of tepezcohuite are promising, more research is needed to fully understand the tree’s safety and proper usage. Most studies on its use were conducted in labs, and while there are anecdotal reports of the bark’s benefits and it’s been used traditionally for thousands of years, its potential risks and side effects are largely unknown.

Like any other new ingredient used topically, start with a small area of the skin when you first use tepezcohuite to rule out a sensitivity or adverse reaction. If you experience redness, burning, itching or any discomfort, discontinue use immediately.

There is not enough evidence to recommend using products containing tepezcohuite while pregnant or nursing.

Using the tree internally is not recommended. There are reports of its psychoactive and hallucinogenic effects when consumed.

Face serums, creams and oils containing tepezcohuite powder or extracts are sold online and in some skin care or cosmetic stores. Make sure to purchase from a reputable brand, and follow the directions on the label carefully.

Before using any new product, do your research, and ask your dermatologist or health care professional for a recommendation.

Succinic Acid Benefits for Skin + How to Use It

If you consider yourself to be “in the know” on the latest ...
Read More
Dr. Axe on Facebook 27 Dr. Axe on Twitter 22 Dr. Axe on Instagram Dr. Axe on Google Plus Dr. Axe on Youtube Dr. Axe on Pintrest 82 Share on Email Print Article 130

Stretch marks can be both frustrating and embarrassing given their scarred appearance ...
Read More
View All
Ad