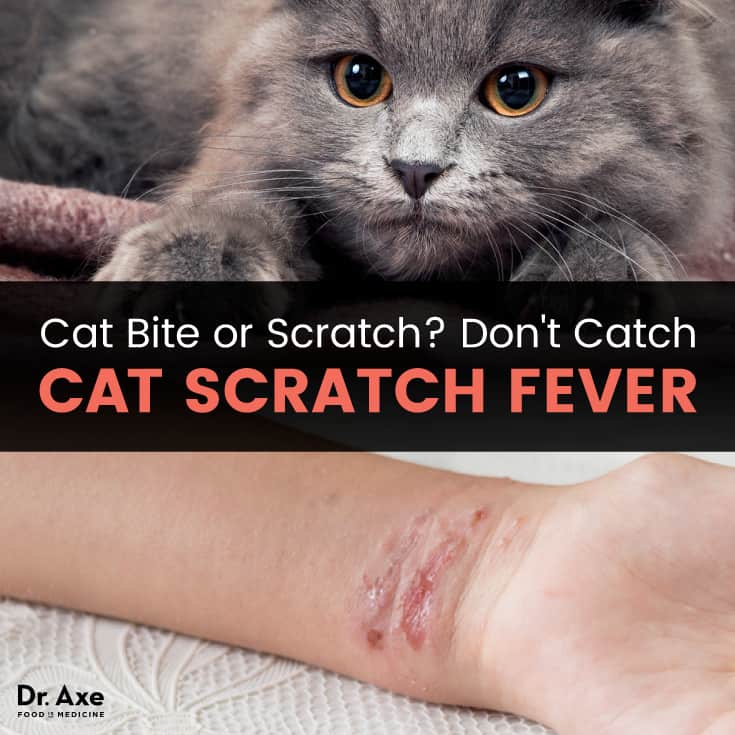 Even though cat bites aren’t always serious, even a small bite or scratch from a cat can lead to a bacterial infection that is not easy to treat. In fact, a study conducted by Mayo Clinic published in the Journal of Hand Surgery reveals that nearly a third of patients treated at Mayo Clinic for a cat bite on the hand required hospitalization. (1)

What Is Cat Scratch Fever?

It is possible to get cat scratch fever from a bite or scratch from a cat infected with a bacterium called Bartonella henselae. You can also get this infection if saliva from an infected cat finds its way into an open wound or touches the whites of your eyes.

According to the Centers for Disease Control (CDC), approximately 40 percent of cats are believed to carry Bartonella henselae at some point in their lives. Kittens under the age of 1 are most likely to be infected with Bartonella henselae. The strange thing is that most of the cats that carry this harmful bacteria exhibit zero signs of being sick. (2)

Cat bites can be problematic because cat’s teeth are so sharp that it’s not hard for them to puncture the skin and actually leave a wound that is surprisingly deep. The deeper a wound the more likely it is to get infected. When cats do bite, the majority of the time it’s a bite on the hand or the wrist. With these locations, it’s not hard for a cat to puncture a joint or the layer of membrane that covers a tendon. This means that the cat’s saliva has a chance to enter the sealed-off areas of joints and tendons, which make a prime breeding ground for the Bartonella bacteria that causes cat scratch fever. (3)

Symptoms similar to cat scratch fever are said to have first been described all the way back in 1889 by Henri Parinaud. (4) So what does cat scratch fever look like? You may already be familiar with the redness and bumps that can easily be seen on the skin of an infected individual.

If you have cat scratch fever, then within 10 days a small raised bump typically appears at the site of injury whether it be a cat bite or cat scratch. As the infection progresses, more bumps can develop under the skin at the point of injury. In addition to these bumps, an infected person may also have a cat scratch disease rash on other areas of the body.

Cat scratch fever symptoms may include: (5)

The specific problematic bacteria that causes cat scratch fever is Bartonella henselae. This bacteria can pass from an infected cat to a human when a cat breaches the skin’s outermost layer by biting or scratching. Another way this bacteria can enter the human body is if a cat’s saliva gets into an open wound. (6) This is why you should never allow a cat (or any animal, for that matter) lick any openings or lesions on the skin.

How do cats get this bacteria in the first place? Cats get the disease from contact with flea feces, which contains the Bartonella bacteria excreted by infected fleas. When cats groom themselves, they can unknowingly consume the flea feces left behind on their skin. Then they get infected with the bacteria themselves. (7)

In order to determine if cat scratch fever is present, a doctor will typically examine the injury site and go over a patient’s symptoms. He or she will likely check the lymph nodes to see if they are swollen and/or tender. If a diagnosis of cat scratch disease is not clear, then a blood test may also be ordered.

Conventional cat scratch fever treatment depends upon a number of things including a patient’s age, medical history, current overall health, how bad the infection is, and the patient’s ability to handle certain procedures and/or medicine.  After evaluation, a doctor’s recommendation may include antibiotics for the infection. According to John Hopkins Medicine, “In most cases, no antibiotics are needed, and the infection will clear on its own.” (10)

With more severe cases of cat scratch fever, the lymph nodes are sometimes aspirated in an attempt to relieve the swelling and pain. However, this is typically not recommended due to possible complications. (11)

Can a cat get cat scratch fever? Yes, it is possible, but most of the time cats just carry the bacteria and don’t get sick or require any treatment. (12)

In general, you’ll want to boost your immune system to both reduce the likelihood of developing cat scratch fever and to fight off an infection. Here are some more specifics on how to best treat cat scratch fever using natural remedies:

The most important conventional and natural cat scratch treatment is to clean any type of scratch or bite from a cat immediately after receiving it. You should also wash your hands thoroughly with soap and water after having contact with a cat or kitten. If you have any kind of skin lesion and a cat licks it, then you should also wash this area thoroughly right away. In general, you should avoid having a cat lick you in the first place, especially where you have any openings in your skin, which includes scratches as well as your eyes, nose and mouth. (13)

Swollen lymph glands caused by cat scratch fever — or lymphadenitis — can be quite painful. To help relieve the swelling and pain you’re experiencing in your lymph nodes, you can periodically apply a warm, wet compress. You can simply dunk a washcloth in hot water, wring it out and apply it to the problem area. Of course, make sure the wash cloth is not too hot. (14, 15)

Research has shown that raw garlic is powerful when it comes to fighting all kinds of infection. Raw garlic, especially its potent chemical known as allicin, has been shown in scientific research to have awesome antibacterial abilities. I recommend crushing and eating two to three raw garlic gloves daily until the infection clears. (16)

According to scientific research published in the Asian Pacific Journal of Tropical Biomedicine, manuka honey displays significant bactericidal activity against antibiotic-resistant bacteria that cause serious infections. Specifically, manuka honey has been shown to be effective against a variety of human pathogens such as salmonella and E. coli. In vivo studies have also shown that manuka honey can effectively treat infected wounds. (17)

When shopping for manuka honey, you’ll want to choose one that has a genuine UMF (Unique Manuka Factor) rating of UMF10 or higher. This rating ensures that the honey has significant antibacterial activity and is recognized by a licensed company in New Zealand.

My own clinical practice, as well as medical literature, has shown me that tea tree, oregano, cinnamon and thyme essential oils are some of the best antibacterial essential oils when it comes to fighting off bacterial infections. For example, a 2016 study published in Frontiers in Microbiology reveals that oregano oil has potent antibacterial activity against a wide variety of antibiotic-resistant bacterial strains. Researchers tested oregano oil’s bacteria-killing ability against 17 different strains of bacteria and it was effective against all 17. (18)

If I were dealing with a cat scratch or bite, I would immediately wash it well and then I would mix one or a combination of these essentials oils just mentioned (for a total of 4 drops) with 1 teaspoon of manuka honey and/or coconut oil and apply it topically to the problem area two times per day.

Similar to manuka honey, colloidal silver is often used both internally and externally to fight infections. Multiple studies have demonstrated that colloidal silver is an effective antimicrobial agent against many different strains of bacteria. (19, 20) What is an antimicrobial agent? It’s a substance that either kills or slows the growth of microbes.

For a cat bite or scratch, I would apply 2 to 5 drops of colloidal directly to the skin area twice a day. If you decide to take colloidal silver internally, just remember that you shouldn’t use colloidal silver for more than 14 days in a row.

How to Prevent Cat Scratch Fever

As Benjamin Franklin once said, “An ounce of prevention is worth a pound of cure.” What this means is that the best form of treatment is really preventing the problem in the first place. There are a lot of easy, natural ways to avoid cat scratch fever.

First off, always wash your hands well after having contact with a domesticated cat. What about stray and feral cats? You really shouldn’t be petting these cats at all. It’s recommended that you never allow a cat to lick you, especially on or around open wounds, as well as the eyes, nose and mouth. If a cat does lick one of these areas, wash it well right away.

Never tease a cat or kitten. If you have a cat, or are playing with someone else’s, it’s smart to play gently to make scratching or biting less likely. You should also ensure that you practice regular and proper flea control with your pet cat since that is the best way to decrease the likelihood that your cat will carry cat scratch fever bacteria. (21)

If you (or a loved one) are bitten or scratched by a cat and then develop any symptoms of cat scratch fever, contact your doctor immediately.

Two possible complications from cat scratch disease include Bacillary angiomatosis and Parinaud’s oculoglandular syndrome. Bacillary angiomatosis is a systemic illness that can affect internal organs and typically includes visible skin lesions that are red and raised with a scaly ring surrounding them. Parinaud’s oculoglandular syndrome is similar to conjunctivitis but also includes a fever and swollen lymph nodes in front of the ear on the same side as the problematic eye. (23)

Sometimes a cat that is harboring cat scratch fever bacteria may experience fever, swollen glands and some muscle aches or, in a worst case scenario, it could have inflammation of the heart, which causes breathing difficultly. Contact your vet if you are concerned your cat may have signs of cat scratch fever. (24)