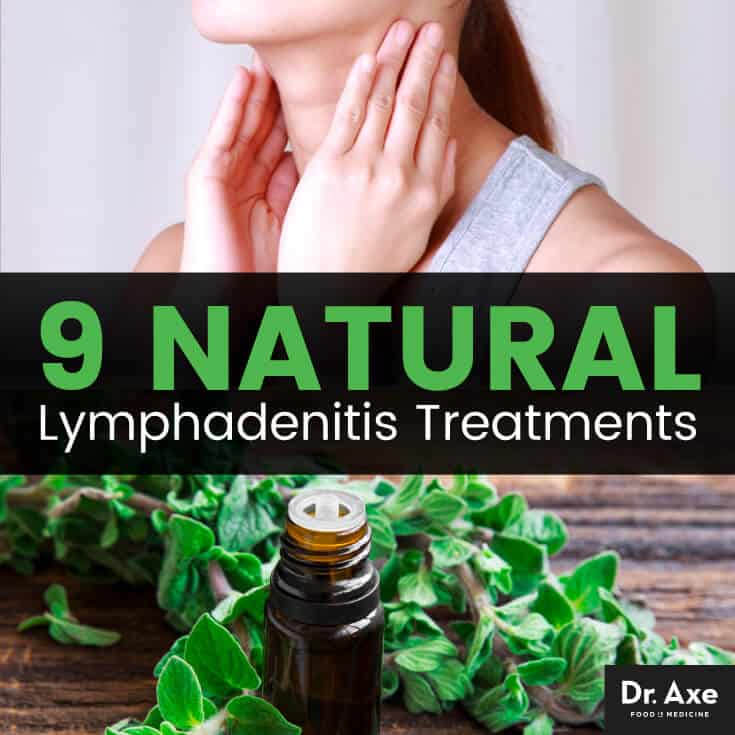 Did you know that the human body has about 600 lymph nodes? All of these small nodes of the lymphatic system work to protect us from illness and damaging, disease-causing inflammation. But sometimes you may notice that your lymph nodes feel swollen, tender and even painful when touched. This condition, called lymphadenitis, is usually a sign of a bacterial infection somewhere in the body.

It’s true that antibiotics and even surgery can help to treat lymphadenitis. Sometimes those options are necessary, but a more natural approach, like using antibacterial essential oils, is also highly effective. Plus, natural treatments for lymphadenitis don’t increase your risk of developing antibiotic resistance or lead to gastrointestinal damage.

Lymphadenitis occurs when one or more of your lymph nodes is enlarged, usually due to an infection. In fact, lymph nodes are an important part of the immune system. They contain white blood cells, called lymphocytes. The white blood cells fight infections by producing proteins that capture and fight invaders, like viruses and other microbes.

These lymph nodes (or glands) are small, bean-shaped structures located along lymphatic vessels. The lymphatic vessels connect to each other in lymphatic chains throughout the body, much like blood vessels. Lymph is responsible for draining fluid from the tissues and transporting it to the lymph nodes, which then destroy bacteria and other harmful substances. After the lymph nodes clean the fluid, it flows back to the main vein called the superior vena cava, where it enters the blood stream. (1)

When the lymph nodes become infected, it’s usually the result of an infection or inflammation that started somewhere else in the body.

The main symptom of lymphadenitis is enlarged or swollen lymph nodes. Generally, a normal size lymph node is less than one centimeter in diameter; however, there are exceptions in lymph nodes in different areas of the body. Also, children normally have larger lymph nodes between the ages of 2 and 10. (2)

In severe cases, complications of untreated lymphadenitis may lead to the formation of an abscess that must be drained surgically, cellulitis (skin infection), sepsis (bloodstream infection) or fistulas that can develop with tuberculosis lymphadenitis. 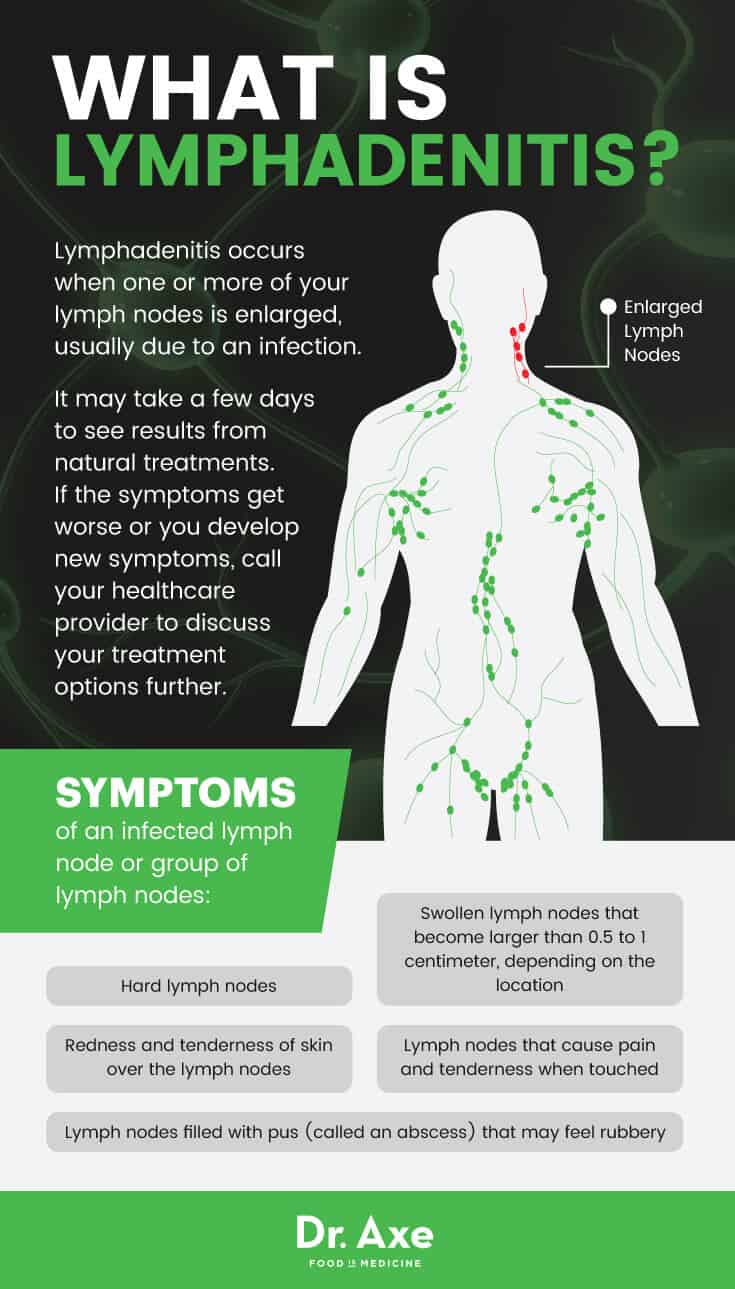 Lymphadenitis occurs when the lymph nodes become swollen and enlarged. This is often in response to bacteria, viruses or fungi in the surrounding areas of the body, like the skin, ear, nose or eye. It is often a complication of certain bacterial infections caused by bacteria like streptococcus (which causes strep throat) or staphylococcus.

In some cases, lymphadenitis is caused by other infections like tuberculosis, cat scratch disease or mono. Tuberculosis is an infectious disease that usually affects the lungs. You may experience gradually increasing painless swelling that occurs in one or more lymph nodes. In more severe cases, tuberculosis lymphadenitis can also cause systematic symptoms like fever, weight loss, fatigue and night sweats. (5)

Cat scratch disease is a bacterial infection spread by cats infected with Bartonella henselae, bacteria that comes from flea bites or when flea droppings get into their wounds. People with cat scratch disease may develop an enlarged lymph node in the armpit region, along with pain, redness and raised lesions in the infected area.

The Epstein-Barr virus most commonly causes mono. It can lead to swollen lymph nodes in the neck and armpits, and other mono symptoms like extreme fatigue, sore throat and body aches.

The first line of conventional treatment for lymphadenitis is antibiotics. According to research published in Current Infectious Disease Reports, antibiotic therapy is frequently successful in the early stages of the disease progress. However, increasing prevalence of antibiotic-resistant bacteria, particularly methicillin-resistant S. aureus, has made it necessary to choose other antibiotics that have showed less resistance or go with other forms of treatment. (6)

Analgesics, which are painkillers, are sometimes used to control pain in the lymph nodes. Common analgesics are acetaminophen and NSAIDs, which are used to reduce inflammation. I’ve talked before about the dangers of NSAIDs because they increase the risk of heart failure, gastrointestinal damage and serious allergic reactions, among other health issues. There are other, more natural and safer ways to reduce pain and inflammation, especially if you know the root of the problem.

In some cases, surgery may be needed to drain a lymph node filled with pus, which is called an abscess. Research published in Clinical Infectious Diseases shows that surgical intervention can be beneficial, with cure rates varying from 81 to 92 percent when performed on children with lymphadenitis affecting the neck and face. But, risks of facial paralysis and excessive scarring are a major drawback of surgical therapy. (7) 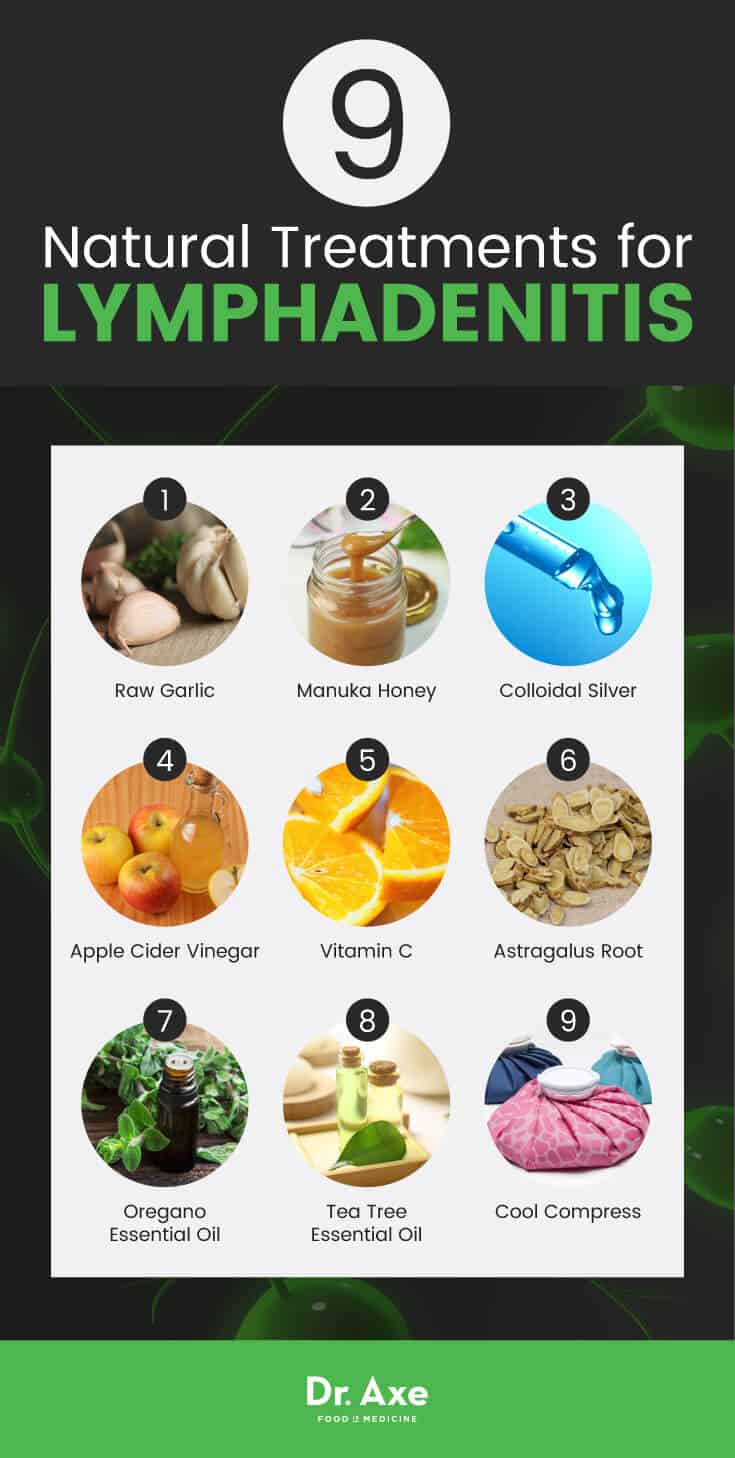 Studies show that raw garlic, specifically chemical compounds found in garlic like allicin, is highly effective at killing countless microorganisms that are responsible for both common and rare infections. Garlic’s antimicrobial, antiviral and antifungal properties can help to relieve infections that lead to lymphadenitis. Crush and eat 2-3 cloves of raw garlic every day until the infection goes away. Chopping the garlic activates allinase enzymes in the garlic’s cells, which produces the allicin that helps to treat infections. (8)

Manuka honey displays significant bactericidal activity against antibiotic-resistant bacteria that cause serious infections, according to research published in the Asian Pacific Journal of Tropical Biomedicine. Researchers suggest that because Manuka honey, and even raw honey, has a low pH level and high sugar content, it can hinder the growth of microbes. Manuka honey in particular can stop the growth of bacteria throughout the body and help to treat bacterial infections that are causing enlarged lymph nodes. (9)

Look for genuine UMF (Unique Manuka Factor) Manuka honey that carries a rating of UMF10 or higher. This rating guarantees that the honey has significant antibacterial activity and is recognized by a licensed company in New Zealand. The UMF rating actually tests the antibacterial performance of the honey and compares it to phenol, a disinfectant.

You can use colloidal silver as a natural remedy for lymphadenitis. It attaches to bacteria cell membranes directly and produces respiration-blocking effects. Unlike antibiotic drugs, colloidal silver doesn’t create resistance or immunity in the organisms that are killed by it.

Colloidal silver also displays anti-inflammatory activity and can help to reduce the pain and swelling associated with lymphadenitis. Take one drop of colloidal silver internally or add five drops to a neti pot to treat an infection. Keep in mind, you shouldn’t use it for more than 14 days in a row.

The acetic acid in apple cider vinegar has the unique ability to kill dangerous bacteria while fostering the growth of beneficial bacteria. This makes apple cider vinegar a natural antibiotic that helps to treat infections and boost the immune system. (11)

You can use apple cider vinegar as a lymphatic tonic that helps detoxify the body and promote lymphatic drainage. This will help the lymph nodes to do their job, protecting the body against illness and fighting bacteria.

To treat infections that can lead to lymphadenitis symptoms, take 2 tablespoons of apple cider vinegar in one glass of water three times daily. You can also try soaking a clean wash cloth in apple cider vinegar and applying it to the inflamed lymph node.

Vitamin C can help to improve a stressed immune system that is fighting an infection. It plays a major role in helping the body to protect itself. It also reduces the chances of developing complications from infections, like lymphadenitis. (12)

Because swollen lymph nodes are a sign of an infection already existing in the body, take a mega-dose of vitamin C, which is 4,000 milligrams for adults, and eat vitamin C foods like pineapple, kale, grapefruit, strawberries, oranges and papaya.

Astragalus root helps swollen lymph nodes caused by a viral infection, like mono. This is because it has powerful antiviral, antimicrobial and anti-inflammatory capabilities. Astragalus is commonly used in traditional Chinese medicine to treat a wide variety of diseases and body disorders because of its immune-boosting effects. (13)

You can take astragalus  as a tincture or capsule, or buy it dried and add it to hot water.

A 2016 study published in Frontiers in Microbiology shows that oregano oil has potent antibacterial activity against some antibiotic-resistant bacterial strains. Oregano oil showed bactericidal effects against all 17 strains that were tested. (14) Oregano oil is also effective against viral and fungal infections.

Oregano oil benefits are superior to prescription antibiotics because unlike antibiotics, using oregano oil to treat infections doesn’t come with harmful side effects, such as ridding the gut of healthy bacteria and increasing your chances of developing digestive disorders.

To treat an infection that’s causing enlarged lymph nodes, take oregano oil internally for a maximum of two weeks. When taking it internally,  dilute it with water or mix it with coconut oil.

Research out of India shows that tea tree oil is effective against bacteria and can help to fight infections. The studies show that upon applying tea tree oil, there was an immediate effect followed by a slow-released effect over a 24-hour period. This means that after using tea tree oil, there’s an initial cellular response. Then the oil continues working within the body to fight the infection. (15)

Tea tree oil is not for internal use. You can diffuse it at home, inhale it directly from a bottle or apply it topically to the area of concern. When using tea tree on your skin, use only a few drops and dilute it with equal parts coconut oil.

Applying a cool compress to the inflamed area can help to reduce pain and swelling. Do this for 10-15 minutes a few times daily until the swelling goes down. Adding 1-2 drops of tea tree oil to the compress will also help to fight the infection that’s causing lymphadenitis. You may also want to elevate the affected part of your body to help relieve swelling and pain.

If you are trying natural remedies for lymphadenitis, it may take a few days for you to see results. If the symptoms get worse or you develop new symptoms, call your healthcare provider to discuss your treatment options further.

You probably already know that probiotic supplements support your microbiome and immune ...
Read More
View All