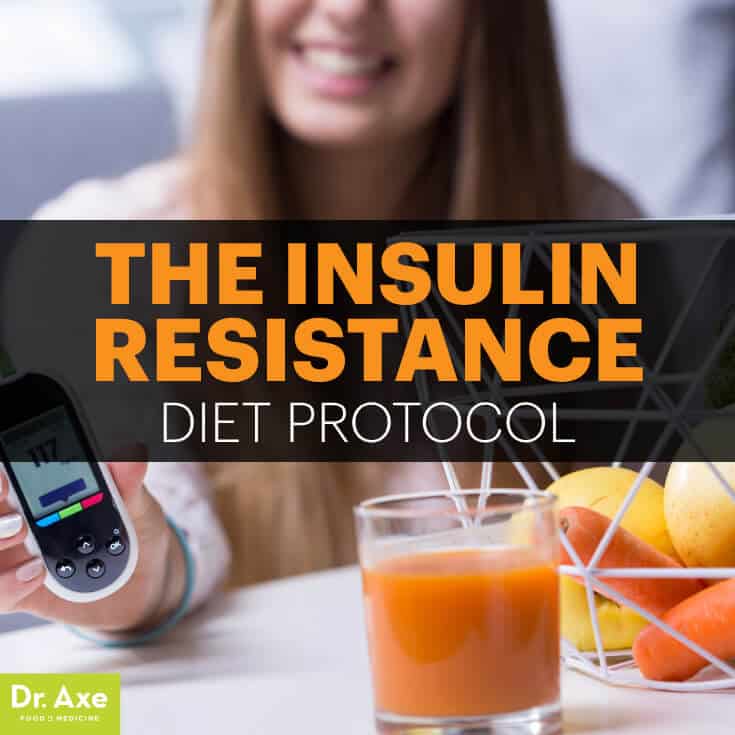 It’s estimated that the number of diabetes sufferers in the world will double from about 190 million to 325 million during the next 25 years. (1) It’s obvious that we need to pay more attention to our lifestyle habits and make some changes. An insulin resistance diet, similar to a diabetic diet plan, helps you lose excess weight and regulate your insulin and blood glucose levels in order to reduce your risk of developing prediabetes and diabetes.

Research suggests that the primary cause of insulin resistance is excess weight, especially excess fat around the waist. Fortunately, weight loss can help the body respond better to insulin. The Diabetes Prevention Program and other large studies indicate that people with insulin resistance and prediabetes can often prevent or delay developing diabetes by changing their diets to follow an insulin resistance diet, along with losing weight.

Research published in Diabetes, Metabolic Syndrome and Obesity suggests that monitoring carbohydrate intake, whether by carbohydrate counting or experience-based estimation, remains a key strategy in achieving glycemic control. Although all carbohydrates can be incorporated into carbohydrate counting, for good health, carbohydrates from vegetables, fruits, whole grains, legumes and dairy products take priority over other carbohydrate sources, especially those that contain added fats, sugars or sodium. (2)

When it comes to grain flour products, it’s best to consume grains in their whole forms instead of flour form because flour tends to increase insulin resistance. If you need to use flour, choose those made from 100 percent whole grains, or try coconut flour or almond flour for an even healthier option.

All types of sugars are capable of raising blood sugar levels and contributing to insulin resistance, but some sources of sugar and carbs are more detrimental than others. For the first time, the American Diabetes Association’s nutrition recommendations now specifically advise the avoidance of sugar-sweetened beverages. These include soft drinks, fruit drinks, iced tea, and energy and vitamin water drinks containing sucrose, high fructose corn syrup, fruit juice concentrates and other artificial sweeteners. In a meta-analysis of cohort studies published in the Journal of Clinical Investigation, individuals in the highest versus lowest quartile of sugar-sweetened beverage intake had a 26 percent greater risk of developing diabetes. (3)

Instead of drinking sweetened beverages, stick with water, seltzer, herbal or black tea, and coffee. When it comes to adding sweeteners to your beverages, or food, choose natural sweeteners like raw honey, organic stevia, dates, pure maple syrup or blackstrap molasses.

Research shows that diets containing more than 50 grams of fiber per day are reported to improve glycemia in people with diabetes. Large prospective cohort studies report that the consumption of whole grains is associated with a reduced incidence of type 2 diabetes, but people should limit the amount of processed whole grain products consumed. (4)

Research shows that the type of fatty acids consumed is more important than total fat in the diet. Individuals with insulin resistance are encouraged to select unsaturated fats in place of saturated and trans fatty acids. The impact of long-term intake of saturated fatty acids on insulin resistance is important because as people with diabetes decrease their intake of carbohydrates, they increase their fat intake, especially saturated fat from foods like baked goods and fatty beef. A study published in Public Health Nutrition suggests that saturated fat intake should be less than 7 percent of your total energy intake per day. (5)

A 2011 study published in the International Journal for Vitamin and Nutrition Research found that the consumption of higher amounts of protein during dietary treatment of obesity resulted in greater weight loss than with lower amounts of protein. Researchers indicate that adequate dietary protein intake is of specific importance for people with insulin resistance and type 2 diabetes because proteins are relatively neutral with regard to glucose and lipid metabolism, and they preserve muscle and bone mass, which may be decreased in people with poorly controlled insulin resistance. (7)

There’s a growing body of scientific evidence that links dairy intake to a reduced type 2 diabetes risk. Potential underlying mechanisms for this association include the role of dairy products in obesity and metabolic syndrome, as well as several dairy components, such as calcium, vitamin D, dairy fat and specifically trans-palmitoleic acid. (8)

Scientists at the Harvard School of Public Health suggest that trans-palmitoleic acid, a fatty acid found in milk, cheese, yogurt and butter, may substantially reduce the risk of insulin resistance and health issues related to insulin resistance, such as prediabetes and type 2 diabetes. (9)

When choosing dairy as part of an insulin resistance diet, go for organic products instead of conventional products made with cow’s milk. Sheep or goat milk is always a better option, and so are raw cheese and kefir.

7. Think About Your Portions

When it comes to controlling insulin resistance, we know that losing weight is key. You can do this by following this insulin resistance diet, but you also need to cut back your portions and calorie intake for maximum impact. Research shows that in recent decades, increases in portion size have occurred in parallel with the rise in the prevalence of obesity. (10) Eat smaller meals throughout the day, and never let yourself get too hungry, which only increases your chances of overeating during your next meal. Start a meal with a smaller portion, and add more as needed.

This can be difficult when you are out to eat at a restaurant. In a survey of over 1,000 adults, 69 percent indicated that, when dining out, they finish their entrees all or most of the time. Of those adults, 30 percent reported that they would have been satisfied with smaller portions. (11) To avoid overeating, try to be aware of your hunger levels going into and during a meal; don’t automatically finish the entire portion — take home leftovers instead. To add to this, eating foods rich in fiber, lean protein and healthy fats helps you achieve satiety and less likely to overeat. This is part of mindful eating, or being present and aware of your appetite and portions.

What Does Insulin Do?

Insulin is a peptide hormone that’s made in the pancreas, an organ that contains clusters of cells called islets and beta cells within the islets that make insulin and release it into the blood. Insulin maintains normal blood sugar levels by facilitating cellular glucose uptake; regulating carbohydrate, lipid and protein metabolism; and promoting cell division and growth. (12) It plays a major role in regulating how the body uses digested food for energy. With the help of insulin, glucose is absorbed by the cells of your body and used for energy.

Insulin was first isolated in 1921 and used as a treatment of type 1 diabetes in 1922. Since then, insulin has advanced from early animal to biosynthetic human and analogue preparations and is increasingly used to treat type 2 diabetes at various stages of disease progression. (14)

There are several types of insulin that can be injected into the fat under your skin so it gets into your blood. According to the American Diabetes Association, insulins are classified by the timing of their action in your body. The onset is the length of time before insulin reaches the bloodstream and begins lowering blood glucose, the peak time is the time during which insulin is at maximum strength, and the duration is how long insulin continues to lower blood glucose. 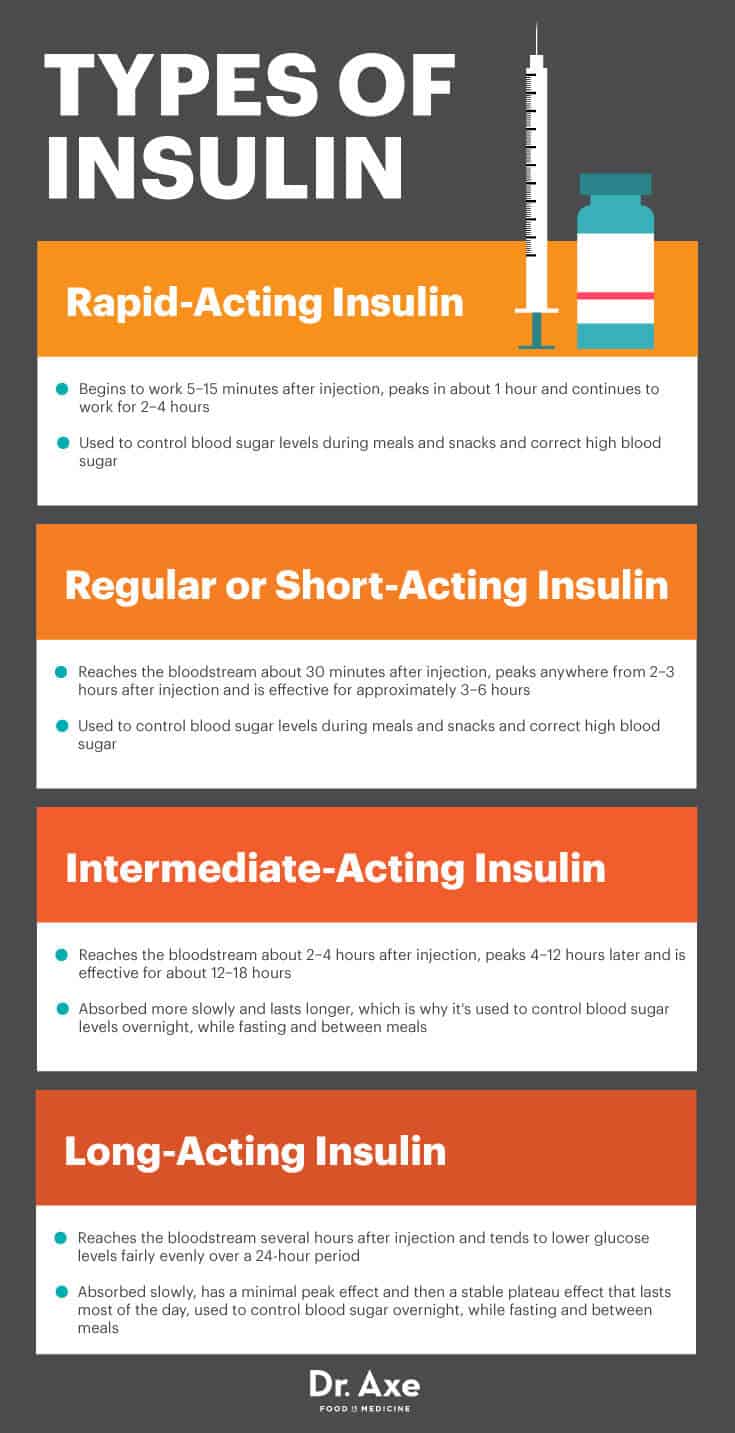 Insulin resistance is defined clinically as the inability of a known quantity of exogenous or endogenous insulin to increase glucose uptake and utilization in an individual as much as it does in a normal population. In other words, when you’re insulin-resistant, your body doesn’t have the ability to respond to and use the insulin it produces. Muscle, fat and liver cells don’t respond properly to insulin and therefore cannot easily absorb glucose from the bloodstream. (16)

People with insulin resistance need higher levels of insulin to help glucose enter cells. When the beta cells in the pancreas cannot keep up with the demand for insulin, excess glucose builds up in the bloodstream, which leads to serious health disorders like prediabetes and type 2 diabetes.

Insulin resistance usually has no symptoms, and people can have this health condition for several years without knowing it. A sign of severe insulin resistance is acanthosis nigricans, which is a skin condition that causes dark patches on the neck, elbows, knees, knuckles and armpits.

Insulin testing may be ordered with glucose and C-peptide tests. Insulin levels can also be measured when taking the glucose tolerance test in order to evaluate insulin resistance. People who experience symptoms of hypoglycemia typically have their insulin levels tested; hypoglycemia symptoms may include sweating, palpitations, blurred vision, dizziness, fainting, confusion and hunger. This usually occurs when blood glucose levels are less than 70 milligrams per deciliter.

Insulin resistance is linked to obesity, hypertension and high levels of fat in the blood. Over time, insulin resistance tends to get worse and the pancreatic beta cells that make insulin begin to wear out. Eventually, the pancreas will no longer produce enough insulin to overcome the cells’ resistance, which results in higher blood glucose levels (prediabetes) and then type 2 diabetes.

We know that research shows the primary cause of insulin resistance is excess weight, so watching your calorie intake and following my insulin resistance diet plan will help you to regulate your insulin levels. Keep in mind that no one diet works for every person. Follow these guidelines and experiment with an array of foods that are high in fiber, lean protein and healthy fats. If you are having trouble following an insulin diet plan or finding what works for you, see a nutritionist or dietician for guidance.

Read Next: How to Maintain Normal Blood Sugar