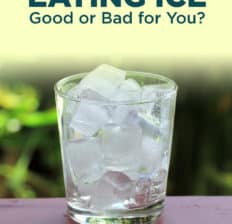 Ice is made up entirely of water. That means that consuming it is hydrating, but is eating ice bad for you when it comes to maintaining dental health or for other reasons?

If you occasionally suck or chew on some ice, such as the cubes left at the bottom of your glass when you finish a drink, it’s probably no big deal. But doing it constantly, especially if it’s due to cravings? This can be a sign of a bigger problem.

Reoccurring cravings to chew on ice cubes (a condition called pagophagia) can sometimes be an indicator of an underlying health condition, such as iron deficiency. Plus, eating ice regularly is capable of damaging your teeth and hurting your gums.

In this article we look at the most common causes of ice cravings, plus better alternatives to eating ice.

Research shows that pagophagia may be an anemia symptom in some people, especially those with iron deficiency anemia. (Anemia can be caused by other factors too, such as those associated with bone marrow or digestive issues.)

Why would anemia cause ice cravings?

It’s still not entirely understood why there’s a link between iron deficiency anemia and eating ice, but it’s speculated that cool ice helps dull pain and inflammation of the mouth and gums that can affect some people with anemia.

Another explanation, which some studies have found evidence for, is that chewing ice can increase alertness and energy among people who feel fatigued due to iron deficiency. One of the most common anemia symptoms is lack of energy, yet the cold sensation in the mouth from ice seems to help “wake” people up.

Researchers believe that ice chewing might increase alertness and energy in fatigued people by causing vascular changes and by bringing more oxygen to the blood reaching the brain. Another explanation is that ice activates the sympathetic nervous system, which also increases blood flow to the brain.

Anemia isn’t the only reason some people like chewing on ice. Other reasons people may be drawn to eating ice include:

The most obvious sign of pagophagia is compulsive, repetitive cravings for ice. To be diagnosed with this condition, you need to have cravings for last more than one to two months. Otherwise, you may want to eat ice for other emotional or physical reasons.

As mentioned above, you may have pagophagia because you’re anemic or low in iron. Symptoms of pagophagia to look out for include:

If you don’t crave ice very often but do like to eat it now and then, consider whether you may be thirsty, stressed or have dry mouth for some reason.

Is Eating Ice Bad for You?

What does eating ice do to your body? First and foremost, it can help you meet your need for water and keep you hydrated.

This is the biggest benefit of eating ice. If you’re somewhere water is not easily available, let’s say you’re camping in the cold, ice (and snow) is a good backup option as long as it’s clean and uncontaminated.

The problem with eating ice all the time is that it can damage your teeth.

Some ice chewers wind up developing cracked and chipped teeth due to damaging their tooth enamel, which is the tough, outer covering of the teeth that helps protect the inner teeth. This can increase the risk for tooth decay and cavities.

Ice can also be rough on existing fillings and crowns in the mouth, potentially leading to them breaking or chipping. Additionally, it can cause jaw pain in some people, especially those prone to TMJ.

Yet another potential risk is that ice chewing can make your teeth and gums overly sensitive to changes in temperature. When you eat or drink cold or hot foods you might wind up feeling tingling and pain.

1. Get Tested for Anemia

First rule out an underlying health condition, especially iron-deficiency anemia. You can talk to your doctor about being tested for anemia, which is a simple blood test.

If you’re low in iron, you’ll want to increase your intake with help from iron-rich foods (such as meat, leafy greens, organ meats, seafood and beans) and possibly iron supplements.

Next, consider whether you want to eat ice because of dry mouth. If you have diabetes, make sure you’re managing your condition and avoiding side effects like oral infections that can cause dry mouth.

If you currently smoke, take steps to quit by enrolling in a supportive program, using a mindfulness app geared toward quitting or using over-the-counter or prescription products that can help.

4. Switch to Popsicles, Cold Drinks and Crunchy Foods Instead

Since chewing ice is the biggest problem when it comes to your dental health, try sucking on something cold instead, such as homemade ice pops made from 100% juice.

Some people report that having juice slushies or partially melted ice also helps. These are softer on the mouth and shouldn’t cause the same issues as ice — just be sure to make semi-frozen drinks yourself so you’re not drinking loads of added sugar.

If you enjoy eating crunchy foods — maybe you find it soothing — have healthy snacks like carrot sticks, apple slices, pistachios, etc., instead.

If you suspect that you have cravings to chew on ice (or anything else) due to stress, then try stress-relieving activities to help break the habit, such as journaling, deep breathing, meditating and so on. You can also discuss emotional issues you may have with a trained cognitive behavioral therapist who specializes in compulsive behaviors and cravings.