Lyme disease symptoms can mimic many other diseases, making a swift diagnosis difficult. That’s problematic, as rates of Lyme disease are on the rise.

That’s why news of an upcoming new test to detect the disease is such a positive development. In October 2018, researchers confirmed they developed a test that will actually detect Lyme DNA, not just antibodies associated with the disease. According to a study published in Clinical Infectious Diseases, this new testing technique will detect Lyme disease bacteria weeks sooner than current tests, allowing patients to start treatment sooner.

As it stands with current antibody-based Lyme testing, a person would have to be infected for approximately three or more weeks before the test would register as positive for Lyme disease. And not to mention these tests are often criticized for missing a significant number of cases, too.

“These direct tests are needed because you can get Lyme disease more than once, features are often non-diagnostic and the current standard FDA-approved tests cannot distinguish an active, ongoing infection from a past cured one,” Steven Schutzer, MD, a physician-scientist at Rutgers New Jersey Medical School, said in a statement. “The problem is worsening because Lyme disease has increased in numbers to 300,000 per year in the United States and is spreading across the country and world.”

The newly developed testing methods are more exact. Dr. Schutzer and his team say it would not be surprising to see these DNA-based direct tests for Lyme disease approved for use. (I’ll be sure to provide an update once these tests become mainstream and available.)

But back to Lyme disease facts. (They aren’t pretty and they’re only getting worse, thanks to climate change health threats.)

Experts believe that diagnosis is more common today due to growing infection rates and greater awareness and better diagnostic tools. (1) Most people know Lyme disease as an infection or autoimmune disease that is caused by deer ticks.

That’s true, but there’s more to the story. Not all ticks are infected and not everyone who gets bitten by a tick carrying the bacteria that causes Lyme will react the same way. Research shows that tick infection rates  vary from 0 to 70 percent even within the same region.

Beyond that, patients experience a wide range of symptoms once infected. This means that individual responses play an important role in the prevention as well as the natural treatment of Lyme disease. Add to that the fact that the standard test available to screen for the disease miss up to 35 percent of cases and it’s easy to see why Lyme is such a complicated topic.

What Is Lyme Disease?

Lyme disease is a chronic condition caused when someone develops an immune reaction to a type of bacteria that’s passed through tick and possibly insect bites. Deer ticks (also called Ixodes ticks) and black-legged ticks carry something called spirochete, which is a corkscrew-shaped bacterium called Borrelia burgdorferi — and these are the two types of insects that spread Lyme disease most often. (2)

In February of 2016, however, the CDC, along with the Mayo Clinic and health officials across Minnesota, Wisconsin and North Dakota, announced the discovery a new species of bacteria called Borrelia mayonii that also caused Lyme disease in people.

Additionally, deer ticks also spread the related but more severe Powassan virus. It’s not just a tickborne disease, either, as experts suspect that certain spiders, fleas and mosquitoes could also potentially carry and spread the disease. (3)

Once the tick or insect bites someone, it transmits the bacteria into the bloodstream. This usually causes a host of autoimmune-like symptoms within several months — including fatigue, fever, headaches and sometimes a rash. Early disseminated Lyme disease occurs when the bacteria that caused this condition spreads throughout the body, which can happen days, weeks or even months after the infected tick bites the individual.

In fact, the real risk associated with Lyme disease is leaving it untreated for many years, which can cause complications that affect the vital organs, blood vessels and the entire immune system.

The U.S. Centers for Disease Control and Prevention (CDC) warns that untreated Lyme disease can lead to serious infections, degeneration of the joints and symptoms of arthritis. CDC also notes left untreated, Lyme can cause heart and blood vessel complications, nerve damage and various other problems of the endocrine and central nervous systems. (4a) In other words, Lyme symptoms go far beyond achy joints.

Dr. Richard Ostfeld wrote a book in 2010 entitled “Lyme Disease: The Ecology of a Complex System,” which was the first book to challenge the idea that Lyme disease is closely linked to the abundance of deer. Rather, he uses Lyme disease as a model system for understanding many other emerging infectious diseases, such as West Nile virus, hantavirus disease and even SARS. (4b)

The Lyme Disease Organization— a group created to support advocacy, research and education about the disease — conducted a survey looking at Lyme disease symptoms in more than 5,000 people with Lyme disease. The group found that 74 percent experienced at least one symptom they would consider to be “severe.” On average, three severe or very severe symptoms were present at any given time. (5)

Symptoms of Lyme disease are somewhat different during the early stages of the disease compared to the later stages when it is considered “chronic.” Experts created a lengthy list of common symptoms that people can use as a helpful “Lyme disease checklist” if they suspect they might have been infected.

The most common symptoms and signs of Lyme disease include:

When Lyme isn’t treated early on (which happens far too often because Lyme disease symptoms mimic other conditions), or when it’s not properly managed, it can sometimes wind up causing permanent damage and complications. Like other infectious or autoimmune diseases, Lyme disease is capable of spreading to just about every part of the body.

Some of these patients do not test positive for having an active infection, which leads some experts to question whether or not Lyme is truly the cause of their ongoing symptoms. Other experts believe that Lyme causes complications when the body starts attacking itself, a characteristic of an autoimmune disorder. (7)

There is still some controversy over how to best treat Lyme disease patients who don’t get better after receiving initial treatment (usually antibiotics). The CDC states that “studies do not show patients who receive prolonged courses of antibiotics do better in the long run than patients treated with placebo”. (8)

Still, many Lyme patients will tell you longer-term antibiotic treatment helped save their lives. Regardless, it’s important that patients with chronic Lyme include certain lifestyle changes as part of managing their symptoms. This includes things such as improving immunity, eating a nutrient-dense diet, staying active and limiting toxin exposure.

Most people get Lyme disease from a tick bite, especially immature ticks (called nymphs) which are very tiny. In this stage, the tick is about the size of a poppy seed and hard to feel or see. These types of tick bites are usually painless unnoticeable, which unfortunately means that the tick can stay on the skin for hours (or even days!) without the person even realizing it. The longer a tick or insect stays attached to the skin, the more likely it will be to transmit the bacteria that causes Lyme disease. This is why it’s crucial to check your skin after you’ve spent time in high risk areas. Interestingly, putting your clothing in the washer/dryer and getting a shower immediately after spending time outside can significantly lower your risk of getting Lyme disease. (9)

Another way that people can become infected with the Borrelia burgdorferi bacteria is by inheriting it from their mother. If pregnant women are infected, they are capable of passing on Lyme disease to their unborn children. It’s still debated whether other forms of physical contact can cause human-to-human transmission, such as sex or blood exposure. It’s possible that Lyme disease can be spread in these ways just like other serious infections/viruses are, such as hepatitis or HIV/AIDS. Still, little is known for certain as of now, and so far research doesn’t show it’s likely. (10)

People who spend a lot of time outdoors or who live in coastal areas are at the greatest risk due to the higher population of bacteria-carrying insects. On the East Coast, deer ticks are more likely to infect people, while on the West Coast black-legged ticks are more often to blame. Studies have found that residents of the coastal Northeast, Northwest California and the Great Lakes region are at the highest risk. (11)

Each Person’s Reaction to Lyme Disease Is Different

Although Lyme disease is transmitted through bites, it affects each person differently depending on the state of their current health and strength of their immune system. There are thousands of people living today who have been bitten by vectors capable of causing Lyme disease, yet they show no symptoms. To some extent, every person’s body is home to viruses, bad bacteria, fungus and cancer cells. So what’s really important is building a strong immune system to keep these invaders at bay.

Someone may be more susceptible to experiencing severe symptoms of Lyme disease if they are experiencing:

How Is Lyme Disease Diagnosed? 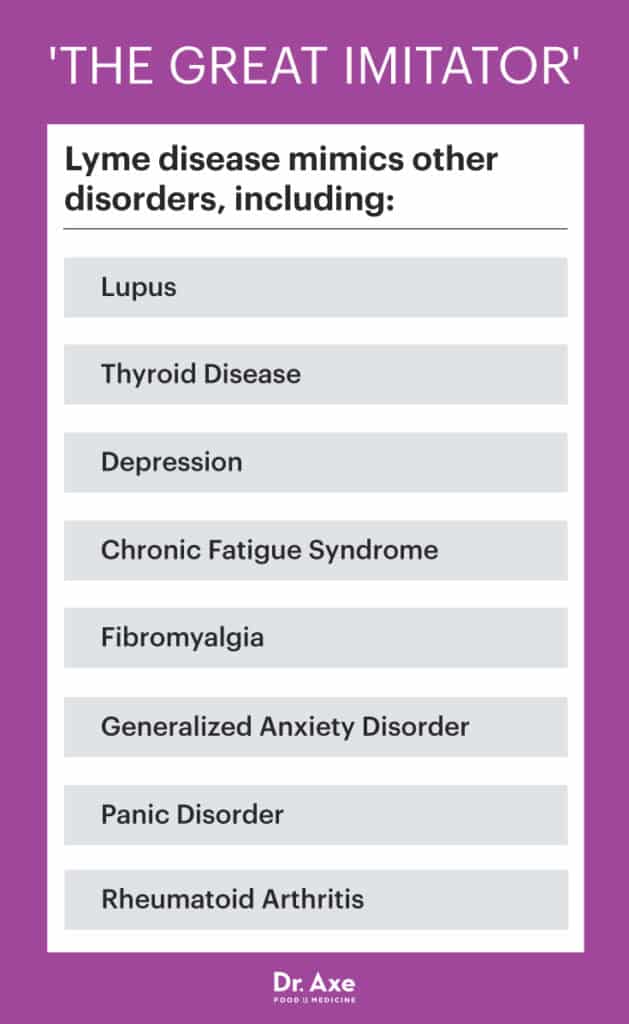 Lyme disease can be difficult to properly diagnose since many of its symptoms closely mimic other health problems and common autoimmune disorders, including thyroid disorders, fibromyalgia, depression, lupus or rheumatoid arthritis. In fact, Lyme is called “The Great Imitator” for this reason. Doctors often rely on a blood test and/or the appearance of a skin rash to make a diagnoses of Lyme disease, which is why many cases are initially missed. Laboratory testing misses a large percentage of Lyme cases, so groups like the International Lyme and Associated Diseases Society recommends other diagnostic and treatment guidelines.

Doctors most often treat Lyme disease by giving patients antibiotics which are taken over the course of several weeks. Depending on someone’s symptoms, other medications like NSAIDs, corticosteroids and painkillers might be used to control pain and inflammation. The CDC reports that: “Patients treated with appropriate antibiotics in the early stages of Lyme disease usually recover rapidly and completely. Antibiotics commonly used for oral treatment include doxycycline, amoxicillin, or cefuroxime axetil. Patients with certain neurological or cardiac forms of illness may require intravenous treatment with drugs such as ceftriaxone or penicillin.”

Although these medications can help many people to overcome Lyme disease, these prescriptions don’t always work. Long-term antibiotic treatments for Lyme disease have reportedly helped many people recover, but they have also been associated with serious complications and don’t always seem to resolve symptoms better then placebo. That’s why I’m a strong supporter of focusing on completely improving your immune system when it comes to taking on Lyme disease. Side effects of common Lyme disease medications may include:

When it comes to managing Lyme disease, first and foremost prevention is very important. Steps you can take to to prevent getting Lyme disease include:

Globally, experts are also trying to prevent Lyme disease infections from increasing by reducing tick habitats and coming up with more effective ways to stop the bacteria from spreading. This is especially important considering the fact that research shows ticks and mosquitoes can also transmit other harmful diseases besides Lyme disease.

The Importance of Improving Immune Function

As mentioned above, maintaining a strong immune system is critical for overcoming Lyme disease. Many symptoms of Lyme are caused by an immune response in the body, which means the state of your immune system determines how intense symptoms will be.

Some of the ways you can naturally help to prevent and treat Lyme disease by improving your overall immunity and health include:

Read Next: 8 ‘You Won’t Believe It’ Natural Painkillers