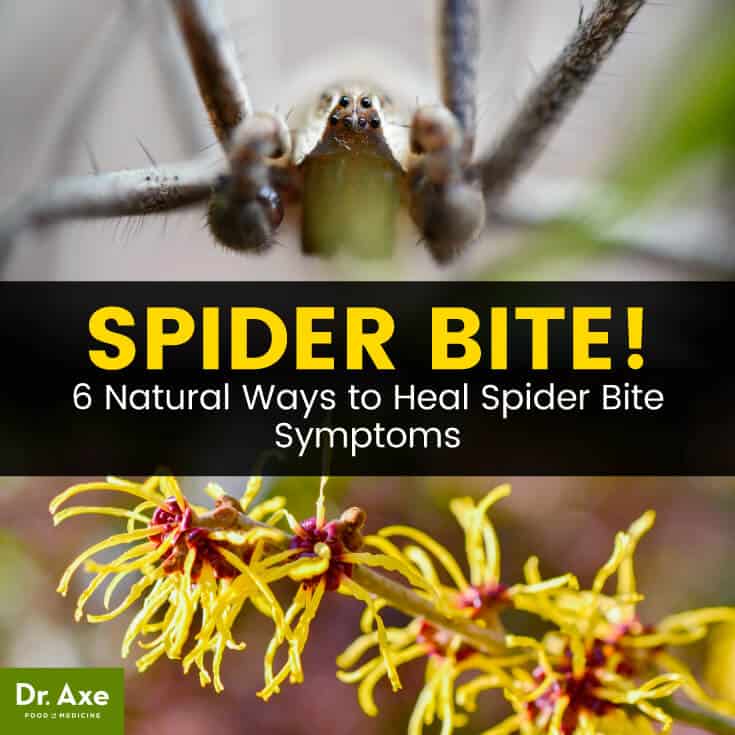 Sometimes you get a bug bite and you have no idea what on earth bit you. Could it be a mosquito? Was it a spider? Wait, a spider can bite? Yes, unfortunately spiders can bite you and they often strike when you least expect it (like when you’re sleeping).

A spider bite, or arachnidism, is defined as an injury resulting from the bite of a spider. All spiders have fangs and most also have venom that enables them to kill their prey. However, only a select group of spiders have fangs that can break through the skin of humans and inject venom that can possibly cause harm. Spiders that fall in this risky-to-humans category include black widow, wolf, brown recluse, hobo and camel spiders. (1)

When it comes to spider bites, there are several options for the spider behind the bite. There are actually somewhere around 40,000 different species of spiders around the world! For an adult human in good health, only around a dozen of those thousands can cause major harm. (2)

In the United States, the black widow and the brown recluse spider are two of the top concerning spiders when it comes to spider bites. The good news is that serious medical complications and deaths from spider bites are not very common. Generally speaking, spiders don’t go around looking to bite humans. When a spider bites a human it is almost always in self defense. How so? Well, when a spider gets caught between an object or surface and your skin, then it feels trapped and is more likely to bite. For example, if a spider is in a boot you haven’t worn in a while and you put your foot into it, then the spider is now trapped between your foot and the boot’s interior. (3)

A lot of times, it’s hard to know what type of spider bit you because you may not notice the bite until hours after it actually happened. It can also be hard to tell a spider bite from other types of bug bites. So what does a spider bite look like? In general, a spider bite looks like most bug bites: a red and inflamed bump. Like other bug bites, a spider bite is also typically itchy and/or painful. The degree of intensity of spider bite symptoms depends on the spider type, the amount of venom injected and your body’s sensitivity to the venom.

“House spider” is a generic term that describes a variety of spiders often found in human dwellings. House spider bite symptoms can vary depending upon the specific type of house spider behind the bite.

Wolf spiders are usually brown, gray, black or tan with dark markings. They have two eyes in front that are much bigger than their other six eyes. Wolf spider bite symptoms can include: (10)

Dangerous spider bites are not common in the United States; however, some things can increase your risk of being bitten by a spider. As I said earlier, your risk of specific kinds of spider bites depends upon the state that you live in. For example, black widow and brown recluse spiders both prefer warm climates and dark, dry places. Spiders don’t typically look to attack humans, but a major risk factor for any spider spite is disturbing the area in which they live.

If you live in the southwestern United States, then you are more likely to come in contact with a black widow spider. Some areas to watch out for include woodpiles, garages, sheds and unused gardening pots or other containers. Another spider that is dangerous to humans in the U.S. is the brown recluse spider, which is most prevalent in some areas of the South as well as the southern Midwest. Where are you most likely to find a brown recluse spider hiding? Likely possibilities include areas that don’t get a lot of traffic, like cupboards you don’t often use, behind dressers, in the clutter of attics or outdoors under rocks and inside tree stumps. (11)

For a more serious spider bite, such as one from a black widow, that is causing life-threatening spider bite symptoms, your doctor may inject you with antivenom or give you the antivenom intravenously. Antivenom sometimes causes intense allergic reactions. (12)

How long does it take to recover from a spider bite? This depends on what type of spider bit you as well as your body’s specific reaction to the spider’s venom. However, the majority of spider bites tend to go away in about a week. (13) Treating a spider bite at home is usually sufficient. With mild and typical spider bite symptoms like some localized pain, itching and inflammation, these natural spider bite remedies are just the ticket to relief. Of course, if you know you have been bit by a poisonous spider, such as a brown recluse or black widow, then by all means head straight to your doctor. (14) If your spider bite is not serious, here are some great ideas for natural treatment at home.

For most spider bites, the first step is always to clean the bite with soap and warm water. Then immediately apply an ice pack to reduce swelling. You can do this on and off for 10 minutes at at time. Repeat icing several times a day, especially in the beginning. This is both a conventional and natural treatment of spider bite symptoms.

A paste made of baking soda and water applied several times a day can really help with the itching of a spider bite.

Avoid scratching the spider bite area. This helps to reduce the risk of infection. Plus, the more you scratch, the redder, more inflamed and more itchy the bite will become.

Applying lavender essential oil to a spider bite can help soothe inflammation and speed up the healing process. Add a few drops of lavender oil to a carrier oil like coconut oil and dab it on the spider bite. The sooner you apply the lavender oil the better to reduce unwanted spider bite symptoms.

As a skin-healing astringent, witch hazel is the perfect topical liquid to apply directly to a spider bite as needed to reduce redness and irritation. (16)

Is It Really A Spider Bite?

If you think a poisonous spider bit you, then by all means seek medical care immediately. But I do want to point out some interesting research that demonstrates how spider bite symptoms are often not caused by a spider or even another bug at all. A study found that out of 182 patients in California who thought they were experiencing spider bite symptoms, only a mere 3.8 percent actually had been bitten by an actual spider.

So what was the cause of their “spider bite symptoms”? Over 85 percent of the patients were diagnosed with infections. One type of infection that has been known to be confused with a spider bite is a methicillin-resistant Staphylococcus aureus infection, more commonly known as MRSA. In addition to bacterial infections like MRSA, there are a few other things that people have been known to confuse with spider bites including bed bug bites, flea bites, poison ivy, and other allergic reactions. (17)

Perhaps even more disconcerting, there have been cases of Lyme disease, caused by tick bites, misinterpreted as brown recluse spider bites. (18) Neither is a condition anyone wants to have, but it’s important to get an accurate diagnosis. If you are unsure about a “spider bite,” be sure to have it carefully examined by your healthcare provider.

Symptoms of a poisonous spider bite are definitely something to take very seriously. If you or a loved one experience worrying spider bite symptoms, then seek medical attention immediately. Serious spider bite reactions or death due to a spider bite are a rare occurrence, but occur most often in children, the very ill or elderly individuals. (19)

Prompt medical care is recommended if any of the follow are true: (20)

On rare occasions, a spider bite can cause an allergic reaction called anaphylactic shock, which can be fatal. Dial 911 or get emergency medical help if you or someone you know is experiencing any of the following: (21)

Keep an eye on a bite as it heals. Be on the lookout for spider bite infection symptoms such as increased pain, swelling or redness as well as fever, swollen glands or other flu-like symptoms.

Like bee stings and other bug attacks, spider bites are not pleasant. Thankfully, most spider bites are not serious and heal within a week using basic home remedies. Spider bite symptoms can really vary and if you don’t know what kind of spider bit you, then the symptoms may hopefully help clue you in to the type of spider behind your bite. However, sometimes spider bites may be confused with other bug bites or even infections. It’s important to always seek medical care promptly if you are unsure what you are dealing with or if you know a more dangerous spider bit you.

How to Cool Hot Feet and Legs Naturally

There are numerous reasons why people struggle to get good sleep at ...
Read More
Dr. Axe on Facebook 640 Dr. Axe on Twitter 3 Dr. Axe on Instagram Dr. Axe on Google Plus Dr. Axe on Youtube Dr. Axe on Pintrest 31 Share on Email Print Article 674

How Many Baths Should You Take a Week?

The question of how many baths you should take a week is ...
Read More
Dr. Axe on Facebook 1 Dr. Axe on Twitter 22 Dr. Axe on Instagram Dr. Axe on Google Plus Dr. Axe on Youtube Dr. Axe on Pintrest 11 Share on Email Print Article 34

People living in cooler locations such as Russia, Finland and England have ...
Read More
View All

1How Many Baths Should You Take a Week?
29 Popular Drugs Linked to Dementia and Memory Loss
3How I Stopped Binge Eating and Started Living
4Always Have A Bloated Stomach? Here Are 10 Reasons Why
5The Leaky Gut Diet and Treatment Plan, Including Top Gut Foods
19 Candida Symptoms and 3 Steps to Treat Them
2How to Stop Diarrhea: Causes, Risk Factors and Home Remedies
3How to Get Rid of Herpes Symptoms Naturally
46 Steps to Balance Hormones Naturally
5Top 12 Natural Home Remedies for UTI