There’s a disease that’s often mistaken for another illness or disorder at first since it can cause flu-like symptoms, fatigue, loss of appetite and other problems associated with different health concerns. But it’s much more serious than the flu. In fact, it’s a progressive, debilitating disease that affects about one in every 4,000 people. I’m talking about mitochondrial disease.

Mitochondrial disease is a disorder that’s caused by failure of the mitochondria, which results from DNA mutations that affect how someone’s genes are expressed. What do mitochondria do, and how does their failure impact someone’s health? Mitochondria are specialized “compartments” found within almost every single cell of the human body (all except red blood cells). They’re often nicknamed “the powerhouse” of cells because they help with the process of creating usable energy (ATP) within cells, but mitochondria also have numerous other roles too.

According to the United Mitochondrial Disease Foundation, mitochondria are responsible for creating more than 90 percent of the energy needed to sustain the human body (plus the bodies of most other animals too), but what might surprise you is that about 75 percent of their job is dedicated to other important cellular processes besides energy production. (1, 2) Without proper mitochondrial functioning, we wouldn’t be able to grow and development from the time of infancy or have enough energy to carry out bodily functions as adults like digestion, cognitive processes and maintaining cardiovascular/heartbeat rhythms.

There’s still a lot to learn about how mitochondrial disease develops, what risk factors might make people susceptible, how it should be properly diagnosed and what the best treatment options are. Researchers believe that the aging process itself is at least partially caused by deteriorating mitochondrial functions, and today we know of many different disorders that are tied to abnormal mitochondria processes (cancer, some forms of heart disease and Alzheimer’s, for example).

That being said, because there isn’t a cure for mitochondrial disease at this time, the goal is to help control symptoms and stop progression as much as possible through a healthy lifestyle and in some cases medications.

1. See a Doctor for Early Treatment and Management

It helps many patients manage their symptoms when they become educated on mitochondrial diseases and know what to expect. Mitochondrial disease is unpredictable and can change shape day to day, so the more a patient understands his or her own disease, the better that person can prepare for symptoms. Symptoms can worsen and progress if they’re ignored so ongoing support and early recognition are key.

2. Get Plenty of Rest

People with mitochondrial disease often experience chronic fatigue, which makes it hard to go about life normally. Things like digestion, bathing, walking and working can be hard to keep up with, so getting plenty of sleep and not overexerting yourself is important.

Many people aren’t able to exercise, at least not vigorously, due to trouble breathing and low energy, and require more sleep than a healthy person would to manage symptoms and stay healthy. It’s also helpful to prevent fatigue by eating regularly and avoiding fasting, plus trying to stick to a normal sleep/wake cycle as much as possible. 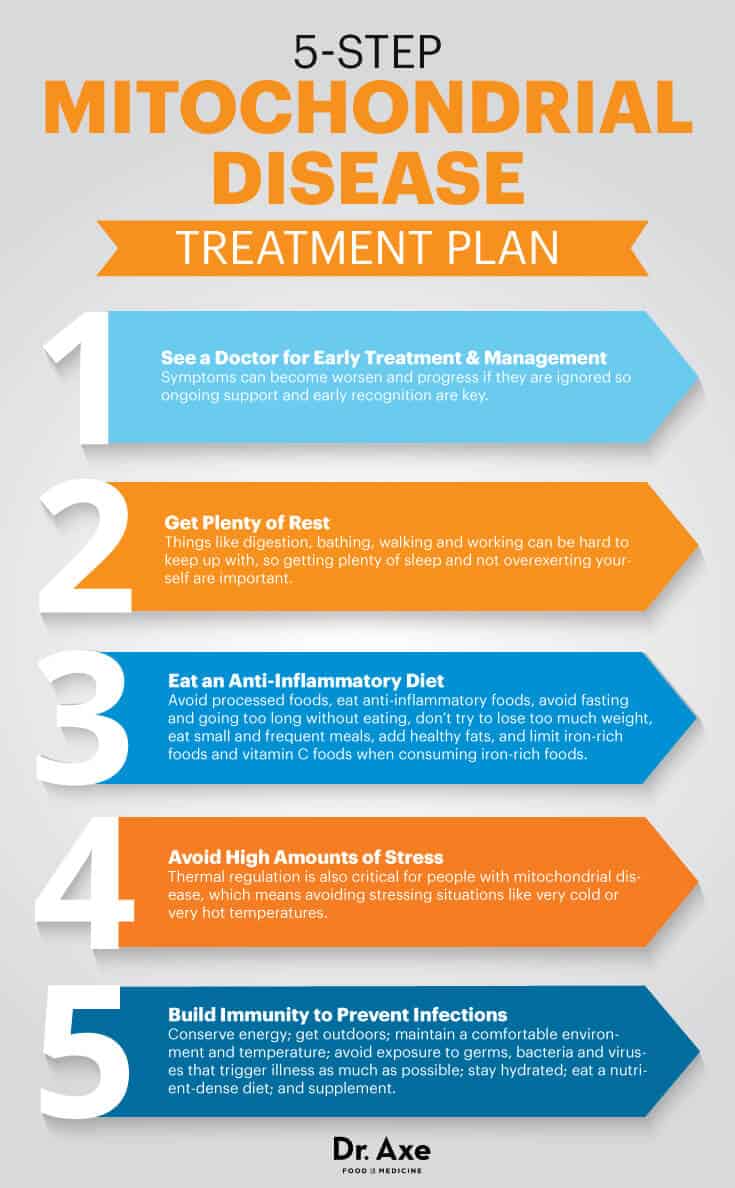 Digesting the foods we eat is one of the hardest processes the body goes through, using a high percentage of our daily energy to metabolize nutrients, send them to our cells and discard of waste afterward. A lot of people with mitochondrial disease experience gut trouble, problems with appetite and eating regularly, and uncomfortable symptoms caused during digestion of foods, which is why a nutrient-dense diet that’s low-processed is most beneficial.

The more processed someone’s diet is (high in things like sugar, artificial ingredients, refined carbohydrates and hydrogenated fats), the harder the organs have to work to extract nutrients and get rid of toxic waste that’s left over. It’s also important to consume plenty of nutrients to help prevent even more fatigue from developing, such as B vitamins, iron, electrolytes and trace minerals.

For some people with mild forms of mitochondrial disease, getting enough rest and eating a healing diet filled with anti-inflammatory foods is enough to help manage their symptoms and improve quality of life. Some helpful tips for improving mitochondrial disease symptoms with a healthy diet include:

People with mitochondrial disease are more susceptible to infections and other illnesses, so it’s crucial to keep immunity up with a healthy lifestyle. Many different natural antiviral herbs might be able to help prevent frequent infections. Tips for helping to improve immunity include:

It takes about 3,000 genes to make one mitochondria, and only about 3 percent of those genes (100 of the 3,000) are allocated for making ATP (energy) within cells. The remaining 95 percent of genes found within mitochondria are tied to cell formation and differentiation, functions of the metabolism, and various other specialized roles.

Mitochondria are needed to:

As you can see, mitochondria are extremely important for development and overall health, since they help us grow from an embryo to an adult and form new tissues throughout our lives. All of the roles mitochondria have help slow down the effects of aging and defend us from disease development.

Symptoms of mitochondrial disease can manifest in many different ways and vary in terms of intensity depending on the specific person and which organs are affected. When a large enough number of cells in one organ are damaged, symptoms become noticeable. Some common mitochondrial disease symptoms and signs include: (9)

It’s possible for mitochondrial disease to affect only one organ or group of tissues in some people, or to affect entire systems in others. Many people with a mutation of mtDNA display a cluster of symptoms that are then classified as a specific syndrome. Examples of these types of mitochondrial diseases include: (10)

The Causes of Mitochondrial Disease

Mitochondrial disease is the result of spontaneous mutations in mtDNA or nDNA. This leads to altered functions of either proteins or RNA molecules that live within mitochondria compartments of cells. In some cases, mitochondrial disease only affects certain tissues during the time of development and growth, which are referred to as “tissue-specific isoforms” of mitochondrial dysfunction. Researchers don’t fully understand yet why people are affected so differently by mitochondrial problems and what leads to experiencing symptoms within various organs/systems.

Because mitochondria perform hundreds of different functions in different tissues throughout the entire body, mitochondrial diseases produce a wide spectrum of problems, making proper diagnoses and treatment hard for doctors and patients. (12)

Even when researchers are able to identify that an identical mtDNA mutation occurred in two different people using genetic testing, both people still might not have identical symptoms (the term for diseases like this that are caused by the same mutation but cause different symptoms is “genocopy” diseases). Mutations in different mtDNA and nDNA can also cause the same symptoms (known as “phenocopy” diseases).

Some evidence shows that inflammation and “medical stress” — caused by an unhealthy lifestyle or conditions like fevers, infections, dehydration, electrolyte imbalances and other illnesses — can activate the immune system, which worsens metabolic disorders and mitochondrial functions.

Read Next: ALS Natural Treatments and the ALS Diet