We all know that loading up on the cookies, candy and soda can skyrocket blood sugar levels and lead to adverse effects on health. But did you know that the same could be true for certain types of starch as well? Thanks to amylopectin, a type of carbohydrate found in starch, some starches may actually have a similar effect.

Amylopectin digestion may raise blood sugar and insulin levels, causing an increase in triglycerides and cholesterol and leading to fat accumulation.

This carbohydrate is widespread throughout the food supply and is the main component of starches, including rice, bread and potatoes.

However, by opting for foods lower in amylopectin and increasing your intake of high-fiber, low-glycemic foods instead, you can sidestep the negative side effects of this carbohydrate.

The official amylopectin definition is: “a component of starch that has a high molecular weight and branched structure and does not tend to gel in aqueous solutions.”

To put it more simply, though, amylopectin is a type of carbohydrate found in the starches that we commonly consume, such as rice, potatoes and bread.

Amylose is made up of long, linear chains of glucose units while amylopectin is highly branched. In fact, it is composed of between 2,000 and 200,000 glucose units, and each inner chain comprises 20–24 subunits of glucose. (1)

Amylopectin is also considered insoluble, meaning that it does not dissolve in water.

This starch molecule has a very similar structure to glycogen, a type of branched polysaccharide that is used to store glucose, or sugar, in your liver and muscles. When comparing amylopectin vs. glycogen, both are highly branched and made up of alpha glucose units, but glycogen has more branches.

Amylose and amylopectin share some similarities but are also drastically different in the ways that they are digested and processed in the body. As mentioned previously, the differences between these two starch molecules starts with their physical structure. Amylose is long and linear while amylopectin is made up of thousands of branches of glucose units.

Although starches contain both of these carbohydrates, the ratio can make a major impact on the way it’s digested and processed. This is because amylopectin is more easily digested and absorbed than amylose. While this may sound like a good thing, it actually means that eating foods rich in this carbohydrate can lead to spikes in blood sugar, insulin and cholesterol levels as well as increased belly fat. A high amount of amylopectin can also increase the glycemic index of foods, which is a measure of how much blood sugar levels increase after consumption. (2)

Meanwhile, foods high in amylose tend to have higher levels of resistant starch, a type of starch that isn’t completely broken down or absorbed by the body. Resistant starch has been shown to reduce fat storage, increase satiety, lower cholesterol levels and blood sugar, and improve insulin sensitivity. (3)

Therefore, it’s best to minimize your intake of foods high in amylopectin and instead focus on selecting starches that have a higher ratio of amylose to ensure you’re getting the most health benefits possible from your diet.

Amylopectin makes up the majority of the starch molecule, which is the primary storage form of energy for plants.

Much like humans, animals and all living organisms, plants need energy so they can grow and function. Plants use a special process called photosynthesis, which involves using chlorophyll to convert sunlight, carbon dioxide and water into sugar, or glucose, to be used as energy. Any extra glucose is stored as starch, which the plant can then convert back into glucose when it needs an extra bit of energy.

In humans, when we eat starch, it is converted to sugar, or glucose, which can also be used for energy. The cells in our bodies depend on this energy to function, making sure that we are able to build and maintain healthy tissues, move our muscles, and keep our organs working efficiently.

Like plants, we are also able to keep unused glucose for use later in the form of glycogen, which is mainly stored in the muscles and liver and can be easily converted to glucose when needed.

Foods with a higher amount of amylopectin have a higher glycemic index, which means they can cause a quick increase in blood sugar and insulin levels.

Insulin is the hormone that is responsible for the transportation of sugar from the blood to the tissues where it can be utilized. When you sustain high levels of insulin over a long period of time, it can decrease the effectiveness of insulin, leading to insulin resistance and high blood sugar.

A study from the Beltsville Human Nutrition Research Center in Maryland published in the American Journal of Clinical Nutrition fed 12 participants a diet composed of either 70 percent amylose or amylopectin for five weeks. Compared to amylose, amylopectin led to a greater increase in blood sugar and insulin levels. (4)

Another animal study from Australia showed that feeding rats a high-amylopectin diet for 16 weeks resulted in a 50 percent higher insulin response as well as insulin resistance. (5)

Conversely, another study published in the American Journal of Clinical Nutrition showed that higher amounts of amylose delayed carbohydrate digestion and absorption and caused decreased blood sugar and insulin levels. (6) 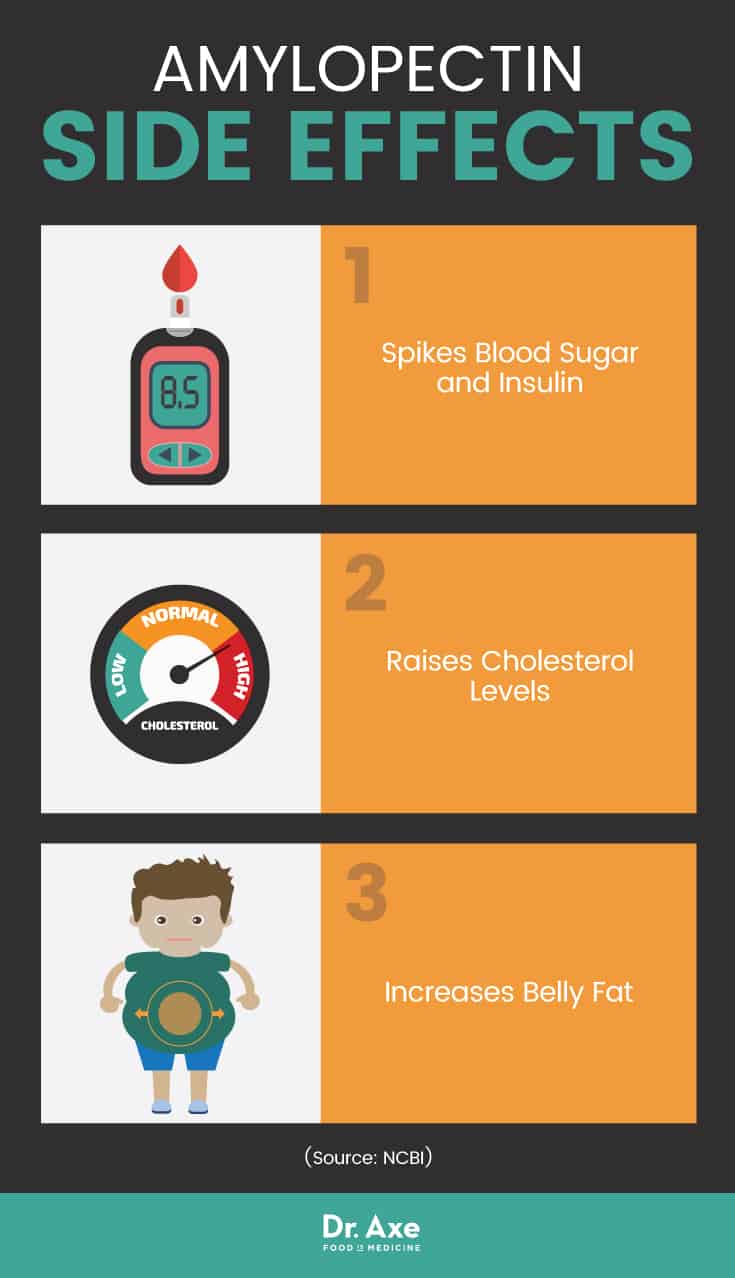 Studies have also found that insulin resistance, which can occur as a result of an a high-glycemic diet, may be associated with an increase in cholesterol production. (8) The Beltsville Human Nutrition Research Center study mentioned above, in particular, found that eating a diet high in amylopectin led to increases in cholesterol and triglyceride levels compared to a diet high in amylose.

Meanwhile, multiple animal studies have found that resistant starch from higher concentrations of amylose could lead to lower blood cholesterol and triglyceride concentrations in rats. (9, 10)

Insulin plays a major role in fat storage and metabolism. It blocks the breakdown of fat and increases the uptake of triglycerides from the blood into the fat cells. (11) Sustaining high levels of circulating insulin can cause insulin resistance as well as an increase in fat storage and a decrease in fat burning, as noted in research out of the University of Toronto in Canada. (12)

Additionally, eating foods with a high glycemic index, such as those with a higher ratio of amylopectin, can increase hunger and the risk of overeating, as research from the Jean Mayer USDA Human Nutrition Research Center on Aging at Tufts University shows. (13)

On the other hand, studies have shown that amylose and resistant starch can enhance fat burning, promote satiety and reduce fat storage. (14, 15)

Instead of filling your plate with these foods, consider swapping in a few foods that are higher in amylose instead. These foods can help you maintain normal blood sugar levels, keep cholesterol levels low and prevent fat accumulation.

Starch has been an integral part of our history since ancient times. Early documentation on the uses of starch is limited; Egyptians supposedly used a starchy adhesive to stick pieces of papyrus together as far back as 4,000 B.C. while in 312 A.D., starch helped proved useful in preventing ink penetration in Chinese papers. (16)

However, although starch has been a dietary and industrial staple for centuries, it is only in the last several hundred years that we’ve come to understand more about its unique structure and the way that amylose and amylopectin function in the body.

Antonie van Leeuwenhoek, often dubbed as the father of microbiology, was the first to observe starch microscopically in 1716. However, it wasn’t until over 200 years later that researchers began to focus on the differences between amylose and amylopectin.

In the 1940s, scientists developed more accurate techniques to separate amylose and amylopectin from starch molecules and began studying the highly branched structure of amylopectin. They were also able to discover the amylopectin enzyme that contributes to the synthesis and breakdown of starch, which helped them understand the complexities of its structure even more. (17)

Other research into the different types of starch has also been fairly recent. In the 1970s, for example, the concept of resistant starch was initially created. Years later, the Commission of the European Communities officially funded research to form an official definition of resistant starch. (18)

As our knowledge about starch continues to increase, we have begun to learn more about how this important dietary component can affect many different facets of health.

A diet high in starch can negatively impact many aspects of health. It can result in an increase in blood sugar, insulin, cholesterol and triglyceride levels, as well as increased fat accumulation.

Ideally, amylopectin should be limited in all diets. However, this is especially important for those who have diabetes or uncontrolled blood sugar levels.

For these individuals, carbohydrate intake should be kept in moderation, and the carbs that are included in the diet should be from nutrient-rich, high-fiber and low-glycemic foods. This can help slow the absorption of sugar from the bloodstream and prevent spikes and crashes in blood sugar levels.

Additionally, many foods high in both amylose and amylopectin contain gluten. If you have celiac disease or a sensitivity to gluten, you should swap these foods for gluten-free, nutrient-dense whole grains like millet, quinoa, sorghum, rice or buckwheat.

Read Next: Amylase: The Anti-Diabetes Digestive Enzyme that Boosts Energy