It’s simply beautiful how earth’s creatures, specifically bees, can make the most wonderful structures. Take, for instance, the honeycomb. It’s even more amazing when such a structure produces something that provides many uses and benefits for everyday life. Enter beeswax.

This amazing substance comes from worker honeybees — the females — and the honeycomb, and it’s commonly used for lowering cholesterol and relieving pain. It’s also used for swelling and inflammation, and of course, it helps produce different forms of raw honey, including the highly beneficial Manuka honey.

This shouldn’t come as a surprise, seeing as another bee byproduct — bee pollen — is so beneficial. So what else can beeswax do? Let’s take a look at this natural product’s biggest benefits and uses.

Beeswax is a great choice for many skin conditions. A honey, beeswax and olive oil mixture is useful in the treatment of diaper dermatitis, psoriasis and eczema. A study conducted by the Dubai Specialized Medical Center and Medical Research Labs Islamic Establishment for Education was designed to investigate the effects of these three substances and the mixture on growth of Staphylococcus aureus and candida albicans isolated from human specimens.

Beeswax is an amazing way to moisturize the skin and is commonly found in skin care products and cosmetics. It can help protect and repair rough, dry or chapped skin because it has the ability to lock in moisture.

In the book “How to Use Beeswax and Honey to Cure Skin Problems,” author Gene Ashburner explains that this wax has rich vitamin A content and emollient properties, which soften and rehydrate the skin as well as aiding in the healthy development of cellular reconstruction. Another benefit to its use is that because it is noncomedogenic, it won’t clog pores. (2)

In addition to being a natural moisturizer that treats dry skin, you can use it daily to help prevent dry skin in the first place. Just combine beeswax with almond oil or jojoba oil, a few drops of vitamin E oil and aloe to prepare a homemade remedy for dry skin.

In 2013, the Korean Journal of Internal Medicine published a study that investigated the alcohols found in honeycomb and if their antioxidant effects helped protect the liver. Researchers conducted the study using a mixture of beeswax alcohol to evaluate the safety and effectiveness in people with fatty liver disease. The study was conducted for a period of 24 weeks, finding that it helped normalize liver function and improve symptoms of fatty liver. (3)

Research reports that very long-chain fatty alcohols obtained from plant waxes have been reported to lower cholesterol in humans. The nutritional or regulatory effects produced by wax esters or aliphatic acids and alcohols found in unrefined cereal grains, beeswax and many plant-derived foods lower low-density lipoprotein (“bad”) cholesterol by 21 percent to 29 percent and raise high-density lipoprotein (“good”) cholesterol by 8 percent to 15 percent. (4)

5. Relieves Pain and Is Anti-Inflammatory

As medicine, beeswax has been studied in the use of relieving pain and inflammation and has mild anti-swelling effects. A 2014 study published in the Korean Journal of Internal Medicine reports that it was used to helped relieve inflammation caused by osteoarthritis. All randomized patients completed the study, and 23 experienced a reduction in pain, joint stiffness and physical function. These reductions were significant beginning in the second week and became enhanced during the trial. (5)

Beeswax is one of the most well-known home remedies for acne. It has strong antiseptic, healing and anti-inflammatory properties, making it effective in the treatment of acne, in particular because it contains vitamin A. (6)

It’s also an excellent skin softener and emollient that helps maintain a smooth skin texture after acne elimination. The combination of skin care applications, a healthy diet and daily exercise is the best way to control and prevent acne.

The natural moisturizers in beeswax make it the perfect lip balm. If you suffer from cracked or chapped lips, topical applications of beeswax and a few other ingredients can provide some much-needed relief. (7) It’s easy to make your own lip balm by combining it with coconut oil, honey, vitamin E oil, and your favorite essential oils, such as orange, peppermint, lavender or lemon.

Stretch marks can be embarrassing and prevent you from wearing some of your favorite summer fashions, so if you’re wondering how to get rid of stretch marks, you may want to try beeswax. Due to its ability to protect the skin and retain water, it can have positive effects on those unsightly marks.

A study  conducted by the Department of Dermatology and Cutaneous Biology Research Institute at Yonsei University College of Medicine in Korea reports that stretch marks are dermal atrophic scars with epidermal thinning due to decreased collagen and elastic fiber. The study suggests that collagen is a major extracellular matrix component that’s very important in wound healing. Since beeswax contains vitamin A, which is helpful in collagen production, it can greatly benefit the reduction of stretch marks. (8)

It’s common to think of beeswax candles when you think of beeswax. This is a good thing since candles made from paraffin can endanger your health and that of your family due to the soot from paraffin wax that can be inhaled. Also, it can cause significant damage to the inside of your house, such as your computers, electrical appliances and ductwork. (11)

Instead, opt for these natural candles, which work well as stress relievers. (12) If making your own candles, you want to check labels to make sure you get organic beeswax since it’s free of toxins. If you’re buying already-made beeswax candles, choosing 100 percent beeswax candles with cotton wicks is definitely the best choice. 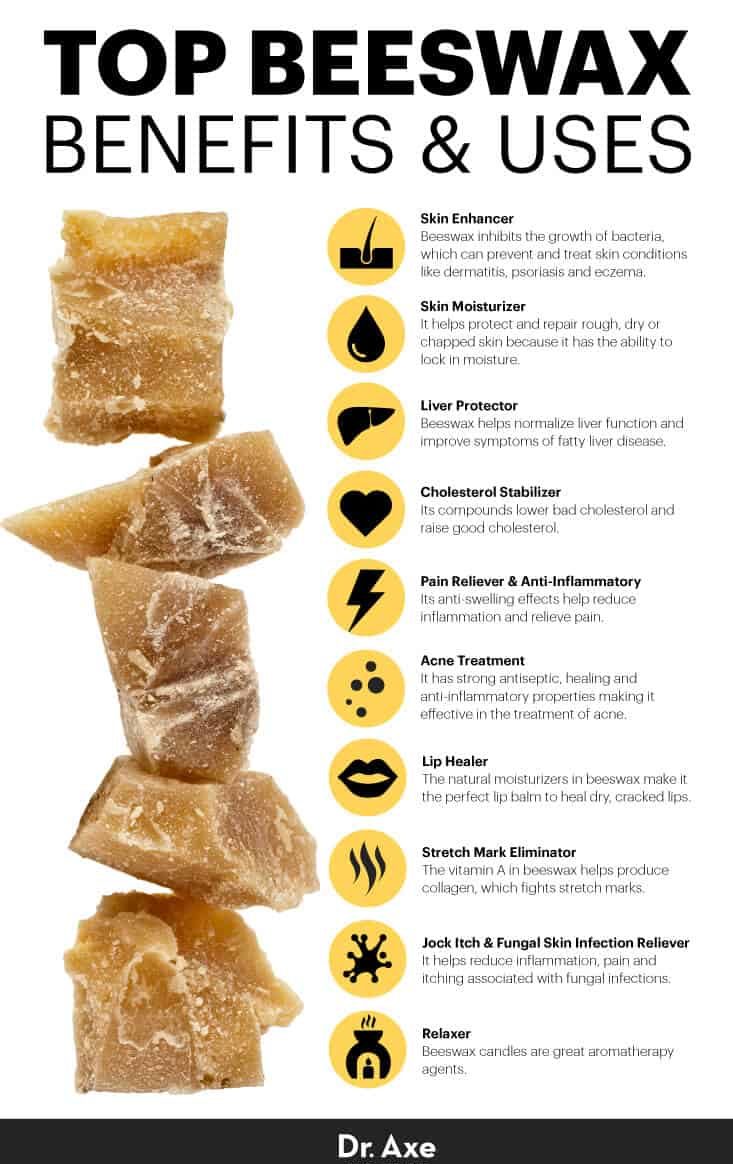 In addition to the above benefits and uses, there are some additional uses for honey and beeswax.

It’s often found for purchase in the form of pellets or pastilles, which have a deep golden color. With an average dimension of three millimeters per pastille, beeswax sometimes has a smoky, aroma. (13)

Beeswax for hair is an ingredient frequented by those who are looking to develop dreadlocks because it helps give the hair a nice firm hold while moisturizing it without a greasy look or feel. (14)

If you are using it for food preparation, the easiest way to work with it is to put it in the freezer for a few hours and then grate it. In many foods and beverages, white beeswax and beeswax absolute are used as stiffening agents. In manufacturing, yellow and white beeswax are used as thickeners, emulsifiers and stiffening agents in cosmetics. However, it’s most commonly used to make the salves and moisturizers that are used externally.

Beeswax absolute is typically used as a fragrance in soaps and perfumes. White beeswax and beeswax absolute are also used to polish pills. The yellow beeswax is the form we love the most because of its natural state. Regardless, make sure you check the ingredients and directions prior to using any form of it, and if you have an allergy that may be related, don’t use it.

Related: Eucalyptus Leaves Benefits, Uses & Side Effects (Plus How to Grow)

First, let’s think about just how important bees are to our health and overall existence. Did you know that we rely on bees for nearly a third of our entire food supply? We also greatly benefit from all the fibers, spices and medicines that come from the plants they pollinate. This produces a great appreciation for our bees, and the list continues.

Bees affect more than just our food and medicines. Honeybees are connected with several critical issues for human and environmental health, including biodiversity, food security, nutrition and sustainable land use. A world without bees would not be possible since the health of the honeybee is a critical step to sustainable agriculture.

Now let’s dig into some history. Have you ever heard, “It’s none of your beeswax!”? This phrase that you might hear a child scream on the playground was once believed to have come from a bit of history. “Mind your own beeswax” and “it’s none of your beeswax” are phrases that basically mean “mind your own business” or “it’s none of your business.” Why? It’s believed that in the 18th and 19th centuries, women who suffered from disfiguring marks left by smallpox used beeswax to smooth out their complexion. It’s been suggested that if someone got too close or was staring too long at these marks, a woman might say “mind your own beeswax,”  — in other words, “Stop staring at my beeswax and take care of yourself.”

Another is that the wax would start to melt if a woman sat too close to the fire, and their companions would have to tell them to “mind their own beeswax,” which was dripping off their chins. As interesting as these stories may seem, they were on to something with the its use as a natural way to heal the skin.

However, the origin of this story is said to be a myth. It seems the story started circulating by a chain email called “Little History Lesson,” which made the rounds in 2000. The first record of “mind your own beeswax” actually appears in 1929 in a children’s book, with additional early records following in 1934 and 1939, quite a few years after women were supposedly slathering wax on their faces and coining popular expressions about it.

A unique discovery, however, was its as dental filling. Evidence has been found of prehistoric dentistry dating back to the Neolithic times reporting a 6,500-year-old human mandible from Slovenia whose left canine crown shows the traces of a filling with beeswax. While we don’t know all the facts, it’s thought that if the filling was done when the person was still alive, the intervention was likely aimed to relieve tooth sensitivity derived from either exposed dentine and/or the pain resulting from chewing on a cracked tooth. This fascinating as it would provide the earliest known direct evidence of a therapeutic-palliative dental filling. (15)

As far as the science goes, beeswax is the foundation of the beehive. Honeybees build their comb from beeswax and fill the geometric shape of the hexagonal cells with honey and brood. Worker bees then secrete wax from eight special wax glands on the underside of their abdomens.

The wax is exuded as a liquid but quickly cools and solidifies. The worker bee collects the wax from her abdomen with her legs. She masticates the wax until it’s pliable and shapes it into the hexagonal cells that make up the honeycomb. (16)

There are many ways you can use this bee product, including the following recipes:

If you have any concerns with allergies, beeswax may present problems for you. It’s important to check with your doctor prior to using it in any form, especially if you’re pregnant, breast-feeding or taking medications.

However, it’s usually safe since it’s a natural substance, so keep the following in mind:

The Power of Beeswax Lowers Both Pain & Cholesterol

Chia seeds are frequently featured as the star ingredient in many healthy ...
Read More
View All