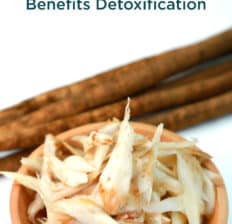 What if I told you that a certain plant’s roots could detoxify your blood, lymphatic system and skin? Would you be interested? If so, you should know about burdock root.

Burdock root has been valued across continents for thousands of years for its ability to purify blood and cool internal heat. Internally and externally, it has potent anti-inflammatory and antibacterial effects on the human body.

It also contains phenolic acids, quercetin and luteolin, which are all powerful, health-promoting antioxidants.

Similar to dandelion tea, you can make burdock root tea, and it can also be found in supplement form or be eaten as a vegetable. What does it taste like? Burdock has a pleasantly crunchy texture and an earthy, sweet flavor that’s similar to lotus root or celeriac.

Read on to find out just how awesome burdock root truly is, including the medicinal uses of burdock in treating serious chronic diseases like cancer and diabetes.

What Is Burdock Root?

Burdock root (genus Arctium) is a genus of biennial plants in the Asteraceae (daisy) family that’s native to Northern Asia and Europe. It’s now found throughout the U.S. as well, where it grows as a weed.

In Japan, it’s often called gobo root and is cultivated as a vegetable.

Burdock has large, heart-shaped leaves and bright pink-red to purple thistle-like flowers. It also has burrs that can stick to clothing or animal fur.

The deep roots of the burdock plant are brownish-green or nearly black on the outside.

Burdock root is a slender, brown-skinned root vegetable that typically grows to be more than two feet in length. It consists primarily of carbohydrates, volatile oils, plant sterols, tannins and fatty oils.

Burdock root is not new to natural medicine. It has been used for thousands of years in Asia and Europe — and more recently in North America.

In Japan, it’s a largely consumed vegetable, typically eaten fresh or cooked, and the young leaves can also be cooked like any other vegetable.

In Traditional Chinese Medicine, burdock fruit has been used for thousands of years. It’s typically associated with the lung and stomach meridians, is known to cool internal heat, and is commonly used for supporting skin health.

In European folk medicine, an infusion of the seeds was often employed as a diuretic, enhancing health by supporting the processes of digestion and elimination. It was also commonly used as a scalp treatment to help prevent hair loss and get rid of dandruff.

What’s the difference between burdock root and dandelion root? Both are members of the Asteraceae plant family and have been used in their entirety for traditional as well modern medicine for years.

Both burdock root and dandelion are excellent for diabetes and skin conditions. They’re also natural diuretics that are loaded with antioxidants.

Dandelion is specifically excellent at cleansing the liver and protecting the bones, while burdock is an amazing blood cleanser, which also makes it very helpful to liver health.

The benefits of burdock root are wide-ranging and sure to impress. Much of the root’s benefits come from its nutrition content.

One cup (approximately 118 grams) of raw burdock root contains about:

It’s clearly a good source of micronutrients, including vitamin B6 and manganese, but there’s more to this traditional root. Here are some of the top ways it can seriously improve your health:

In traditional herbal texts, burdock root was described as a “blood purifier” or “alterative” and was believed to clear the bloodstream of toxins.

Research on traditional medicine indicates that burdock root has active ingredients that have been found to detoxify heavy metals from the blood, improving organ health and the health of the whole body. It also promotes blood circulation to the skin surface, which improves skin health.

Essentially, the lymphatic system is the the body’s inner “drainage system,” a network of blood vessels and lymph nodes that carries fluids from tissues around the body into the blood and vice versa. If you can make your lymphatic system stronger, then you can help your body ward off all kinds of disease and serious health issues.

Burdock root helps induce lymphatic drainage and detoxification. Research suggests that it works as a blood purifier and blood cleanser. This helps strengthen the lymphatic system.

Diuretics stimulate the kidneys and help the body get rid of excess fluid, mainly water and sodium. Burdock root is a natural diuretic so through burdock consumption, you can naturally and easily help your body eliminate excess water by increasing urine output.

A study published in the Journal of Alternative and Complementary Medicine found that burdock extract shows promise as a diuretic in humans.

By elevating the rate of urination, burdock root can help remove waste from the blood and body. If you have issues with fluid retention, you should ask your doctor about trying burdock root before resorting to prescription products.

Topical products containing burdock root have offered relief from pesky skin issues for ages. From acne to eczema and psoriasis, burdock root is known to calm and treat these common skin issues.

Consumption of burdock has also helped many people with skin issues through its blood-cleansing and internal cooling abilities.

Scientific studies have even shown that burdock extract can improve the clinical signs of aging skin. One 2008 study found that topical treatment with a natural burdock extract significantly improved the metabolism of the dermal extracellular matrix and led to a visible wrinkle reduction.

Burdock root contains inulin, a soluble and prebiotic fiber that helps improve digestion and lower blood sugar. That makes it an excellent choice for people trying to naturally manage their blood sugar.

In Europe, the fresh root is used for lowering blood sugar. Its inulin content makes it particularly suitable for diabetes.

In fact, animal studies of mammary, colon and pancreatic cancer have shown promise for burdock’s ability to fight against cancer.

One big reason burdock shows promise for naturally fighting cancer is the fact that it contains arctigenin.

Studies explain that arctigenin is a lignan found in certain plants of the Asteraceae family, including greater burdock (Arctium lappa). It has been shown to combat cancer cells by selectively stopping the proliferation of cancer cells and inhibiting the cancer cells’ production of particular proteins (NPAT proteins), hence crippling cancer’s ability to reproduce.

Another study found that arctigenin was a cancer-specific phytochemical that killed human lung cancer cells, human liver cancer cells and human stomach cancer cells. Studies like this are proving what many have believed for years — that burdock root is a seriously effective natural cancer fighter.

Burdock root is known for its powerful anti-inflammatory abilities, and it can be in important part of an arthritis diet. A study published in the International Journal of Rheumatic Diseases relayed that burdock root tea improved inflammatory status and oxidative stress in patients with knee osteoarthritis, also known as degenerative joint disease.

If you suffer from an enlarged spleen, burdock root can help. Studies indicate that the spleen is a vital “guardian” organ that we rely on to keep the body free from infections, viruses and all kinds of dangerous pathogens.

An enlarged spleen is a clear warning sign that the immune system is fighting hard to remove threats from the body but failing to do so because it can’t keep up with high demand.

Your spleen is in constant contact with your blood, so as burdock root cleanses your blood, it also cleanses and protects the spleen. It can help the spleen because it improves blood quality as well as liver health, circulation and fights inflammation.

Improving those four factors has a direct positive effect on spleen health so you definitely want to include burdock in your spleen-healing lineup.

Burdock root can help get rid of painful tonsillitis. Acute tonsillitis is a type of inflammatory virus that causes tissues within the tonsils to become infected with harmful bacteria.

Burdock root is used in traditional medicine to relieve tonsillitis because it increases wound healing, decreases inflammation, and helps relieve coughs, sore throats and pain. Although there’s limited evidence on its effects on tonsillitis specifically, research does indicate that burdock is an effective anti-inflammatory agent that’s used traditionally for respiratory infections like influenza and other infections. 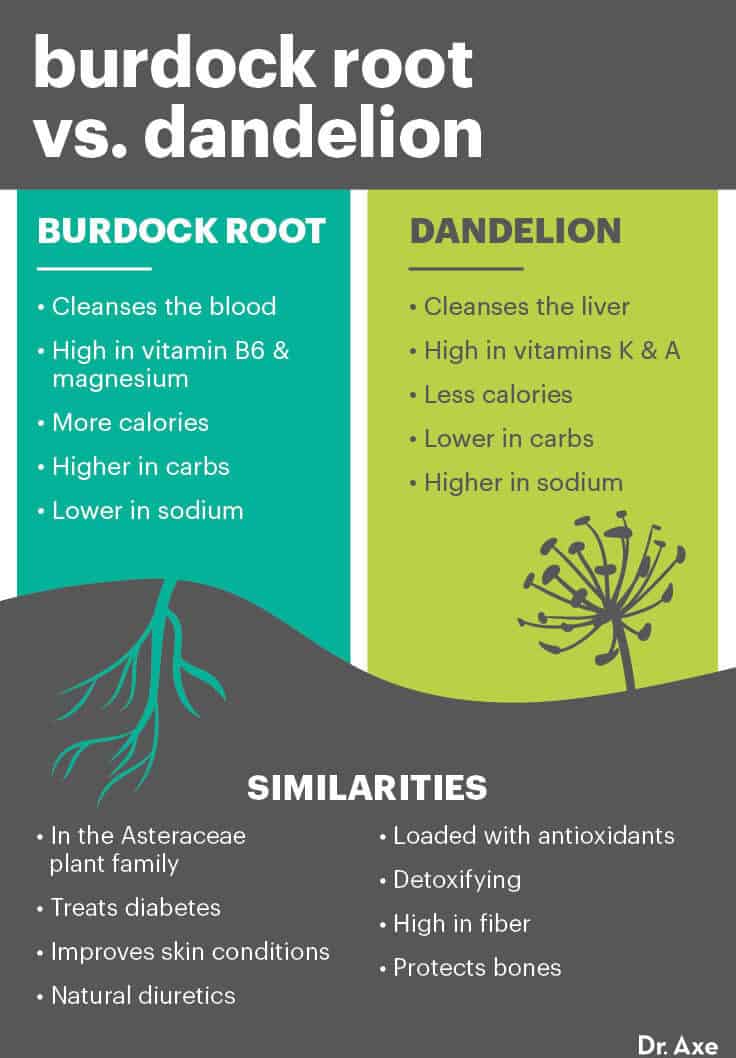 Burdock root is considered safe when consumed as a food, which is done regularly in Asian countries. However, pregnant and nursing women should avoid burdock root, as it may cause damage to the fetus.

If you’re dehydrated, you should not take burdock because the herb’s diuretic effects could make dehydration worse. Additionally, if you’re sensitive to the Asteraceae/Compositae plant families, which include ragweed, chrysanthemums, marigolds and daisies, studies reveal that you could possibly experience an allergic reaction to using burdock internally or externally, including dermatitis.

Since the roots of burdock closely resemble those of belladonna or deadly nightshade (Atropa belladonna), there is a risk that burdock preparations may be contaminated with these potentially dangerous herbs. For this reason, you should always purchase burdock root products from established and well-respected companies.

If you’re going to undergo any type of surgery, stop taking burdock root at least two weeks before your surgery date. Burdock might increase the risk of bleeding during and after surgery.

There are no known scientific reports on the pediatric use of burdock, so you should only give burdock to children under the supervision of a doctor.

You can purchase fresh burdock root and include it in a vegetable stir-fry or stew. You can also peel, slice and eat it raw with a little sea salt, or you can pickle it.

Burdock root should always be cleaned well and can be peeled like a carrot if you don’t like the skin on. Cleaned, dry roots can stay fresh for several months if kept in a cool and well-ventilated area.

Processed parts or slices should be stored in the refrigerator and used as soon as possible.

A typical dosage of burdock is one to two grams of powdered dry root three times per day.

Some people forage wild burdock root, but this is not without risk. Burdock roots accumulate toxins so you have to be absolutely sure you pick well away from roadsides, industrial sites and areas that have been sprayed with pesticides.

If you’re going to pick wild burdock root, then you must be 100 percent sure of your burdock identification. People sometimes mistake young burdock for foxglove, which is highly toxic. It’s a dangerous error that’s easy to make so your safest bet is to purchase fresh burdock root at the store.

Here are some great ways to start using burdock root in your own kitchen today:

The burdock plant definitely produces a root that is not only tasty (hopefully you agree), but incredibly beneficial when it comes to so many functions of the body as well as many very serious health issues. Whether you’re looking to maintain your health or greatly improve it, burdock root a try if you haven’t already.

Here’s a reminder why: