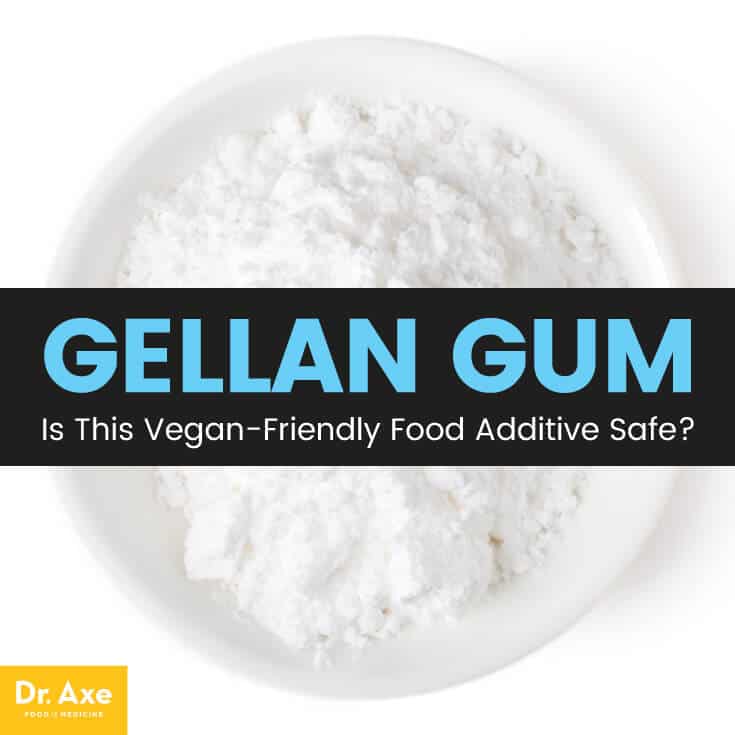 Since its discovery more than three decades ago, gellan gum has become a common additive in the food, beverage, personal care, industrial cleaners and paper-production markets, especially over the past 15 years. According to KP Celco, today the leading global producer of gellan gum, some of its primary functions and uses include: (1)

What Is Gellan Gum?

It’s a food additive produced through bacterial fermentation using a sugar source, which provides a source of energy for the bacteria to consume. Gellan gum is considered to be valuable and unique in manufacturing due to its capability of creating fluid, gel solutions that have weak structures, a characteristic that’s important for structuring and adding “creaminess.”

It also has a preferable setting temperature and tends to keep its stability/structure even when temperatures change or increase. In other words, it has a high “degree of thermal stability” (some studies show it’s able to withstand temps up to 120°C/248°F).

Gellan gum’s uses are similar to those of locust bean gum, guar gum and xanthan gum — all similar products used to help bind, stabilize and texturize products (especially foods). While it’s best to use stabilizers and emulsifiers in small amounts (such as the minute portions added to many supplements and health food products), the addition of a tiny serving of gellan gum to recipes like yogurt or desserts can help produce a smooth finished product.

1. Can Be Used for Texturing and Stabilizing in Food Preparation

The most common use for gellan gum is either using it alone or combining it with others products/stabilizers when cooking, preparing dessert or baking to prevent separation of ingredients. It’s very useful for adding a gel consistency to purees or spreads, especially since it doesn’t change the color or taste of foods. It also won’t turn into liquid, even once heated, but rather holds its structure.

Gellan gum is capable of producing a wide variety of interesting fluid textures, including thicker liquids (like nut-based milks), marinades or toppings for protein fishes, or vegetable purees thanks to its ability to increase viscosity.

Because it’s produced from bacteria fermentation and not from any type of animal source, gellan gum is a common additive in vegan diet foods. Vegan recipes — including cultured products or those that normally contain dairy, such as almond milk or coconut kefir/yogurt, for example — are usually in need of some sort of added stabilizer and thickening agent to prevent the products from separating.

This is where stabilizers like organic gellan gum, locust bean gum or guar gum can come in handy. Often the gellan gum found in foods is vegetarian-, kosher- and halal-approved, although this depends on the specific product it’s used in.

3. Helps Prevent Desserts from Melting and Is Very Heat-Stable

One interesting use of gellan gum in food preparation is in gastronomy, especially to create specialty desserts. Chefs sometimes add gellan gum to ice cream and sorbet recipes to help with churning, plus it helps prevent melting of cold desserts when a flame or alcohol is used to provide browning or crusting (such as to make creme brulee, flaming sorbet or bananas foster). (2)

One small study, conducted by researchers of the Chemistry Department at the University of Edinburgh, that tested the effects of ingestion of gellan gum at a high level for 23 days showed that it acted as a faecal bulking agent that had effects on dietary transit time. “High levels” of gellan gum in the volunteers’ diets consisted of 175–200 milligrams of gellan gum per kilogram of body weight.

As a bulking agent, it was found that consuming gellan gum caused increased transit time in about half of the volunteers but decreased transmit time in the other half. Faecal bile acid concentrations also increased, but gellan gum had no significant effects on factors like blood glucose, insulin concentrations, or HDL cholesterol and triglyceride levels.

Overall, the study found that consuming gellan gum, even in high amounts above what would be typical in someone’s diet, caused no adverse dietary or physiological effects, but it may have positive effects on symptoms like constipation or diarrhea due to how it bulks stool. (3)

Findings from another animal study published in the Journal of Nutritional Science and Vitamintology also suggest the same. Gellan gum typically shortens gastrointestinal transit time, suggesting improved evacuation/elimination in those who prone to digestive problems like constipation. (4) Technically, gellan gum is a type of exopolysaccharide produced by certain types of bacterial fermentation, specifically using the culture called Sphingomonas elodea. Lily pads naturally produce small amounts of gellan gum because they’re home to this specific bacterial strain. The gellan gum used in different industrial and food-manufacturing practices is created in a lab through commercial fermentation on a much larger scale.

As a polysaccharide, gellan gum is a long chain of carbohydrate-based molecules. Chemically, this makes it similar to other food products that are used to bind ingredients together, including flour or starch. You’ll find gellan gum in a range of common food products, including dairy-free milk alternatives, chocolate milks, yogurts, desserts, vegan products, whipped toppings, spreads or purees, and noodles — all of which depend on gellan gum or other stabilizers to keep ingredients from separating.

One of the reasons this additive has gained notoriety in food manufacturing is that it only needs to be used in small amounts and can withstand higher temperatures while keeping a consistent viscosity compared to other thickeners. Replacing the additive called agar is one of the most common uses for gellan gum, since it has similar effects with roughly half the amount used.

Depending on the concentration of these gellan gums, it’s possible to create a wide variety of textures/structures due to how their gelling ions work to absorb and hold liquid.

If you’re able to find any in local stores or choose to purchase some online, small amounts of gellan gum can serve similar purposes to other thickening or stabilizing agents, including those we don’t particularly recommend consuming — such as carrageenan. Therefore, if you’re in need of binding ingredients together to create fluid textures, especially in any vegan recipes, it can make a good natural alternative when cooking or baking.

Gellan gum is used with liquids to dissolve it. The liquid can either be cold or hot. Look for either high-acyl gellan or low-acyl gellan. Here is a bit about how they differ:

You only need a very small amount of gellan gum to work. Look for products in the concentration range of 0.2 percent to 1.0 percent gellan gum if you’re using it in recipes. Use a very tiny amount to start (start with a small pinch, less than half teaspoon), adding more as you go depending on the texture you’re looking for and the size of the recipe. Keep it mind it works quickly and will gel recipes very fast, so less is more!

Here are several recipes you can try adding a pinch of gellan gum to in order to help with texturing and heat-stabilizing:

Gellan gum was first discovered by food researchers in the 1970s when it was found to be growing naturally on lily pads. It was introduced to the food market as a substitute gelling agent for other stabilizers, especially agar agar or gelatin.

Researchers realized that gellan gum had two added benefits over other similar products: It could be used in very small amounts but still produce the same texturizing results, and it wasn’t very sensitive to heat. It’s also plant/bacteria-based and therefore suitable for vegan products, while some thickeners derived from animal products (including gelatin) are not.

Gellan gum became approved for food use in the United States in 1992 by the U.S. Food and Drug Administration. Today, different gellan gum products are available for food or industrial use that go by a variety of brand names, most produced by the company C.P. Kelco.

So far, studies done on gellan gum consumption have not found toxic effects. Although it appears to be safe for most people to consume, especially considering it’s typically used in very small amounts, you still want to limit the quantity of any added emulsifiers you consume or cook with, including gellan gum. All stabilizers/thickeners pose potential concerns for interactions, including digestive issues, which some people might experience.

One reason that food additives, including emulsifiers, may be potentially dangerous is because they can alter healthy levels of intestinal bacteria in some people. This means it’s possible they will disrupt the normal mucous layer that lines the gut and contribute to chronic, low-level inflammation that promotes changes in cells in the digestive tract, including in the colon.

More research still needs to be done regarding the effects of stabilizers in certain foods, but for now try to only use these products in small amounts and only on occasion to limit risk for side effects. (6)

Keep in mind that gellan gum is also most commonly found in foods that are at least partially processed, which is another reason to avoid having too much. If you regularly consume products containing any type of emulsifier — like guar gum or locust bean gum, for example — keep an eye out for digestive issues or any usual symptoms that might indicate you’re not properly breaking the ingredients down.

Also, remember that gums are not the only way to bind ingredients when cooking or baking — you can also use natural products instead of using gums, including eggs or egg whites, pureed bananas or other fruit, mashed sweet potato, flax or chia seeds (they form a gel when soaked in water), or plain gelatin.