Although there are plenty of topics that nutritionists and health care professionals tend to disagree upon, the health benefits of fish are pretty much universally recognized and accepted across the board. But while it may be common knowledge that some of the healthiest fish to eat like wild-caught salmon and tuna are loaded with nutrition benefits, certain types of fish like sole fish may not be such great additions to your grocery list.

Besides being lower in valuable nutrients than other kinds of fish, there are also plenty of concerns about the safety of sole fish, both in terms of health and the environment. Since being added in 2010 to the seafood red list of fish sourced from unsustainable fishing practices, consumers have become increasingly aware about the potential drawbacks of this species of flatfish.

What Is Sole Fish?

Sole fish is a type of lean flatfish that belongs to the Soleidae family. They are found primarily around the coasts of Europe, but certain kinds are also found in the waters of the Americas as well.

There are many types of sole fish, but the Dover sole fish is the most common and widely available. It has a flat appearance and is typically brown with a white underside. It has two small eyes on the right side of its body and can grow up to 28 inches long. The sole fish dwells close to the ocean floor and is a bottom feeder, meaning it feeds on crustaceans and shellfish found at the bottom of the sea.

These fish are typically caught by trawls, which are large nets that scrape the bottom of the ocean floor to catch fish. They have a mild taste and are versatile enough to use in many different recipes.

However, there are several concerns about the safety of eating sole fish, plus its sustainability and the potential ecological and environmental impacts of its controversial fishing methods.

1. It Has a High Risk of Contamination

One of the biggest concerns with eating any type of fish is contamination. Heavy metals and toxins can build up in the tissues of fish, which can then cause serious health problems when consumed by humans.

Because of high amounts of pollution and industrial waste, flatfish varieties like sole fish are more likely to contain dangerous contaminants that could wreak havoc on health. Studies analyzing biomarkers of contaminant exposure have found that sole fish in some areas may be exposed to high amounts of polycylic aromatic hydrocarbons, toxic chemicals associated with damage to the DNA and cancer development. (1, 2)

In addition to being potentially risky in terms of health, sole fish is also overfished and unsustainable. In fact, sole fish actually made it onto Food & Water Watch’s “dirty dozen” list of fish you should never eat due to the unsustainable and unsafe fishing practices that are commonly utilized. (3)

This is because most sole fish are caught in demersal trawls, which are large nets that are pulled through the ocean and used to target bottom-living fish. (4) This method of fishing can have a serious negative environmental and ecological impact as the fishing gear can cause long-term damage to sensitive habitats on the ocean floor. Additionally, because fish on the bottom of the ocean often travel in mixed groups, trawling can result in the accidental catching and discarding of vulnerable fish species, taking a toll on their populations.

The American Heart Association recommends squeezing in at least two servings of fatty fish per week to meet your needs for omega-3 fatty acids. (5) Omega-3 fatty acids are crucial to many aspects of health and have been associated with a number of potential omega-3 fatty acid benefits, such as improved heart health, reduced cancer development and protection against cognitive decline. (6)

Unfortunately, sole fish is a type of lean fish, meaning it’s relatively low in omega-3 fatty acids compared to other types of fish. Instead, it’s better to add a few servings of fatty fish varieties, such as salmon, sardines, mackerel and tuna, into your weekly rotation to get in a hearty dose of omega-3 fatty acids.

4. There Are Much Better Options Available

If you’re looking to up your intake of fish, there are plenty of more nutrient-dense and sustainable fish varieties available. Wild-caught salmon, mackerel, sardines, tuna, black cod and anchovies are all delicious alternatives that are more environmentally friendly and have minimal risk of adverse side effects on health.

Not only do most of these nutritious fish cram in more heart-healthy omega-3 fatty acids, but they are also higher in many key vitamins and minerals. A serving of salmon, for instance, contains a hearty chunk of the thiamine, niacin, vitamin B6 and selenium that you need for the entire day, plus packs in nearly 19 grams of protein. Sardines, on the other hand, are rich in vitamin D and can meet and exceed your vitamin B12 daily requirements in just one serving.

You can easily swap healthy fish varieties into your favorite sole fish recipes to kick up the micronutrient and omega-3 content of your meals. To mimic the texture and mild flavor of the sole fish, opt for similar types of fish like red snapper, pollock fish or Alaskan cod.

While there are certainly plenty of drawbacks to including sole fish in your diet, there are some potential sole fish health benefits to consider as well.

Nutritionally, sole fish are low in calories but high in protein, which can be especially beneficial for weight loss. According to a study published in the American Journal of Clinical Nutrition, bumping up protein intake by just 15 percent for 12 weeks increased satiety, decreased body weight and reduced caloric intake by an average of 441 calories over the course of the day in participants. (7)

Sole fish also contain an array of other important nutrients as well. In particular, sole fish are a good source of selenium, vitamin B12 and phosphorus, as well as several other vitamins and minerals.

Additionally, although they do have a high risk of contamination with certain compounds, they are typically lower in mercury than many other types fish. Mercury poisoning can be detrimental to health, causing symptoms like muscle weakness, impaired vision and speech, and loss of coordination. For most people, it’s recommended to limit the amount of high-mercury fish consumed  in general, but for children and pregnant women, it’s advisable to avoid eating high-mercury fish altogether. In terms of mercury content, sole fish can be a better alternative to certain types of fish rich in mercury, such as shark, swordfish and king mackerel.

Fish is a key ingredient of both Ayurveda as well as Traditional Chinese Medicine. On an Ayurvedic diet, consumption of healthy meats like fish is permitted in moderation. Fish may be especially beneficial for those with a vata constitution while pitta and kapha types should limit their consumption to freshwater fish only. Fish like fillet of sole are best when combined with other light foods like grains and vegetables. However, they may not be compatible paired with eggs or dairy products.

Sole fish is low in calories and fat but high in protein and select micronutrients like selenium and vitamin B12.

In addition to the nutrients listed above, sole fish also contains a small amount of zinc, vitamin E, calcium, iron and folate.

Both are also plagued with a bad reputation when it comes to health. Sole fish is known for being unsustainable and environmentally damaging while tilapia is typically farm-raised and associated with a slew of negative health effects. Studies show that farm-raised fish like tilapia, salmon and swai fish contain higher concentrations of antibiotics, pesticides and dangerous contaminants like dioxins. (9, 10)

However, there are some notable differences between these two types of fish. Tilapia are a type of freshwater fish that belong to the Cichlidae family along with other types of fish like angelfish and peacock bass. Sole fish, on the other hand, are mostly saltwater fish and members of the flatfish family.

The sole fish price is also a bit higher than tilapia fish, making it slightly less affordable. Dover sole fish, for example, generally runs about $6–$8 per pound while you can find frozen tilapia for just $2–$3 per pound.

Because they share a similarly mild flavor, they can both be incorporated into a variety of recipes. Tilapia and sole fish each work well in fish tacos, casseroles, soups and curries and can also be grilled, baked or broiled and served alone. 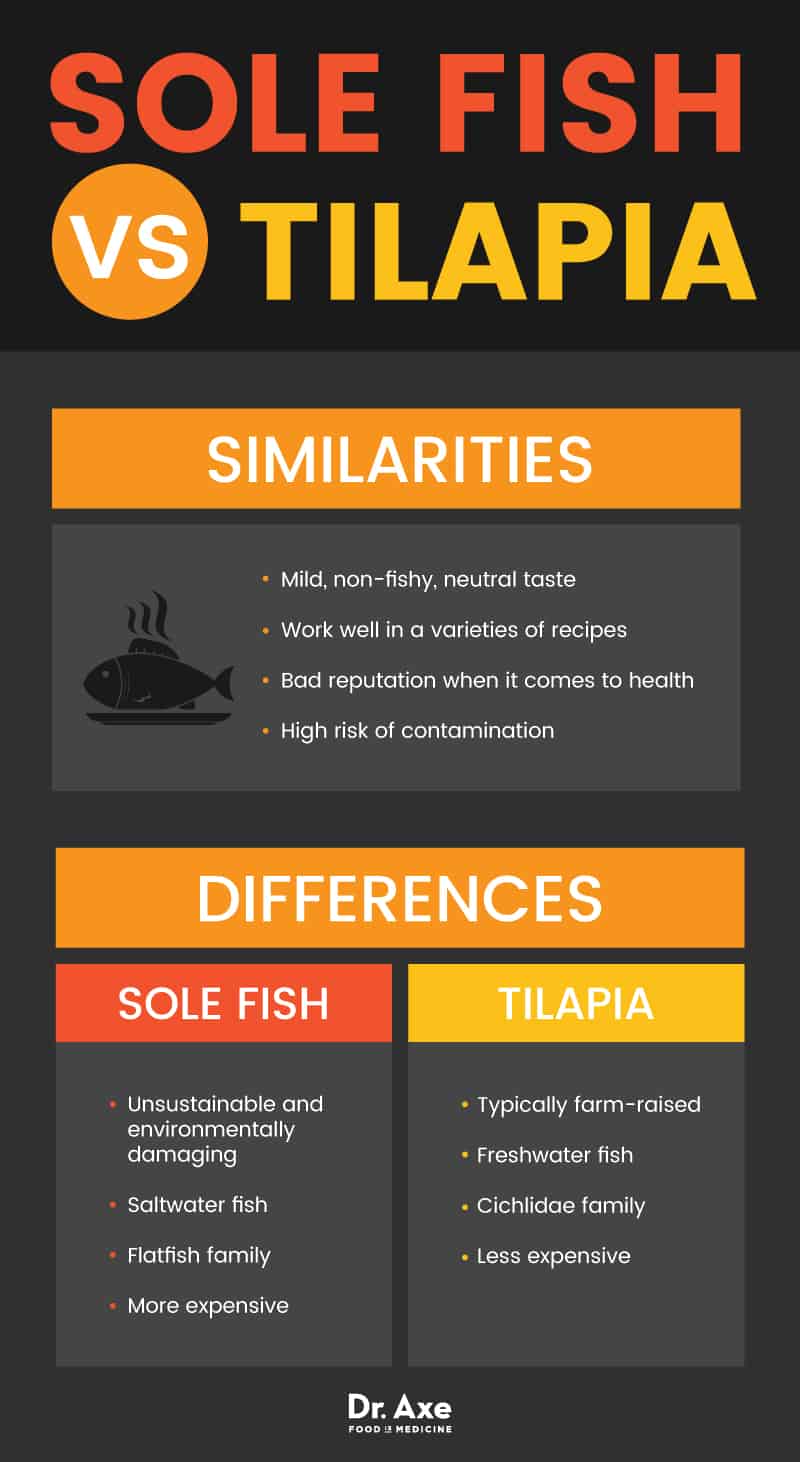 However, by replacing sole fish with other healthy fish varieties, you can still enjoy your favorite sole recipe or dish — but with a healthy and sustainable twist. Some of the best fish to eat instead include tuna, Atlantic mackerel, wild-caught salmon, sardines and sablefish.

Here are some healthier takes on sole recipes that you can give a try:

Sole fish are named for their flat appearance and resemblance to a sandal, or “solea” in Latin. In other languages, such as Greek, German, Spanish and Dutch, sole fish is named for the tongue.

The common sole, or Dover sole, is one of the most popular varieties of sole fish, especially among chefs, because it’s easy to work with, versatile and has a mild yet slightly sweet flavor. It’s often used in classic recipes like sole meunière, which is a classic French dish in which sole fillets are coated with flour, pan-fried in butter, and then served garnished with lemon and parsley.

In spite of its popularity, Greenpeace International added the common sole to its seafood red list in 2010 to bring awareness to the unsustainable and damaging fishing practices that are used to catch this popular type of fish.

Allergies to white fish like sole are more common than allergies to other types of fish, such as blue fish. If you experience any food allergy symptoms after eating sole fish, discontinue use immediately and talk to your doctor.

Pregnant women and children are warned to monitor and limit their intake of mercury to prevent developmental delays as well as birth defects. While sole fish is low in mercury and generally considered safe to consume during pregnancy, it should still be limited to one to two times per week as part of an otherwise healthy and nutritious diet.

Additionally, make sure that sole fish is fully cooked to minimize the risk of parasitic infections and foodborne illness. It’s generally recommended to cook fish to an internal temperature of 145 degrees Fahrenheit or to cook until the flesh can be easily separated with a fork and is opaque. (11)

Read Next: Is Rockfish Good or Bad for Your Health?