Have you ever walked by a seemingly harmless plant and accidentally brushed up against it, only to feel a slight stinging or prickly pain? Chances are you have … and you very well may have come in contact with a stinging nettle plant.

While you may curse the plant for the temporary discomfort, stinging nettle is actually a beneficial perennial that treats several conditions. Perhaps its most popular use is turning the leaves into stinging nettle tea, which is a common natural allergy relief remedy. It’s also proven to benefit skin, bone and urinary health as well.

So how can this plant that seems like something to stay away from at first contact actually become a medicinal go-to? Let’s find out.

What Is Stinging Nettle?

Stinging nettle, or urtica dioica, is a perennial flowering plant that has been used medicinally for ages, dating back as far as Ancient Greece. Today, it can be found all over the world, but its origins are in the colder regions of Europe and Asia. The plant usually grows between two to four feet high and blooms from June to September. It grows best in nitrogen-rich soil, has heart-shaped leaves, and produces yellow or pink flowers.

While best known for the stinging reaction that occurs when the skin comes into contact with the fine stinging hairs (also known as trichomes) located on its leaves and stems, when processed and used medicinally, stinging nettle has a number of helpful health benefits, according to the Department of Dermatology at the Penn State University College of Medicine. (1)

Most stinging nettle products are made from the stem and leaves, but the roots also have pharmacological qualities. The herb has anti-inflammatory qualities that can affect treatment of many health issues. (2) The aboveground parts have typically aided in allergy relief and other breathing-related problems. The roots are able to provide relief for urinary disorders and enlarged prostate as well.

Why Does It Sting?

Stinging nettle contains a number of chemicals, such as serotonin, histamine and acetylcholine, some of which can be very irritating. These chemicals cause the stinging irritation on skin and are found at the base of the fine hairs on the nettle.

When brushed up against, the fragile tips of the stinging hairs break off. The remaining hair becomes a small needle, able to deliver the chemicals into the skin. The reaction can cause pain, redness, swelling, itching and numbness.

Despite its reputation for pain, stinging nettle is used to help a number of ailments. Studies have shown it has antioxidant, antimicrobial, anti-ulcer, astringent and analgesic capabilities. (3)

According to the University of Maryland Medical Center, the plant has been used most commonly throughout history as a diuretic and for treating painful muscles and joints, eczema, arthritis, gout, and anemia. Today, it’s used primarily to treat urinary issues, as well as allergies and joint pain.

The most proven health benefits of using stinging nettle help with the following:

BPH symptoms are caused by an enlarged prostate gland pressing on the urethra. BPH sufferers experience varying levels of increased urges to urinate, incomplete emptying of the bladder, painful urination, post urination dripping and reduced urinary flow. A testosterone-induced BPH study on rats has shown that stinging nettle may be as effective at treating this condition as finasteride, the medication commonly used to treat BPH. (4)

Doctors are still not entirely sure why stinging nettle alleviates some of these symptoms, but many clinical studies infer that it contains chemicals that affect the hormones that cause BPH. When taken, it also directly affects prostate cells. Stinging nettle root extract has also been shown to slow or stop the spread of prostate cancer cells. (5) It’s usually used in combination with saw palmetto and other herbs. The root of the plant is primarily used in connection with urinary issues, including lower urinary tract infections.

Stinging nettle is used as a successful general diuretic and can help urine flow as well. It’s also used in home remedies for bladder infections.

Arthritis sufferers often experience joint pain, typically in the hands, knees, hips and spine. Nettle works alongside nonsteroidal anti-inflammatory drugs (NSAIDs) to allow patients to decrease their NSAID use. Because prolonged use of NSAIDs can cause a number of serious side effects, this is an ideal pairing.

Histamine production in the body creates the adverse reactions related to allergies. Allergies cause uncomfortable congestion, sneezing, itching and more.

Stinging nettle’s anti-inflammatory qualities affect a number of key receptors and enzymes in allergic reactions, preventing hay fever symptoms if taken when they first appear. (7) The leaves of the plant contain histamine, which may seem counterproductive in allergy treatment, but there is history of using histamines to treat severe allergic reactions. (8)

There is also evidence that in severe reactions, low plasma histamine levels (as opposed to high levels) are present. Another global study from the National College of Naturopathic Medicine found that stinging nettle use for allergy relief was rated higher than placebos in a 98-person, randomized, double-blind study. (9) 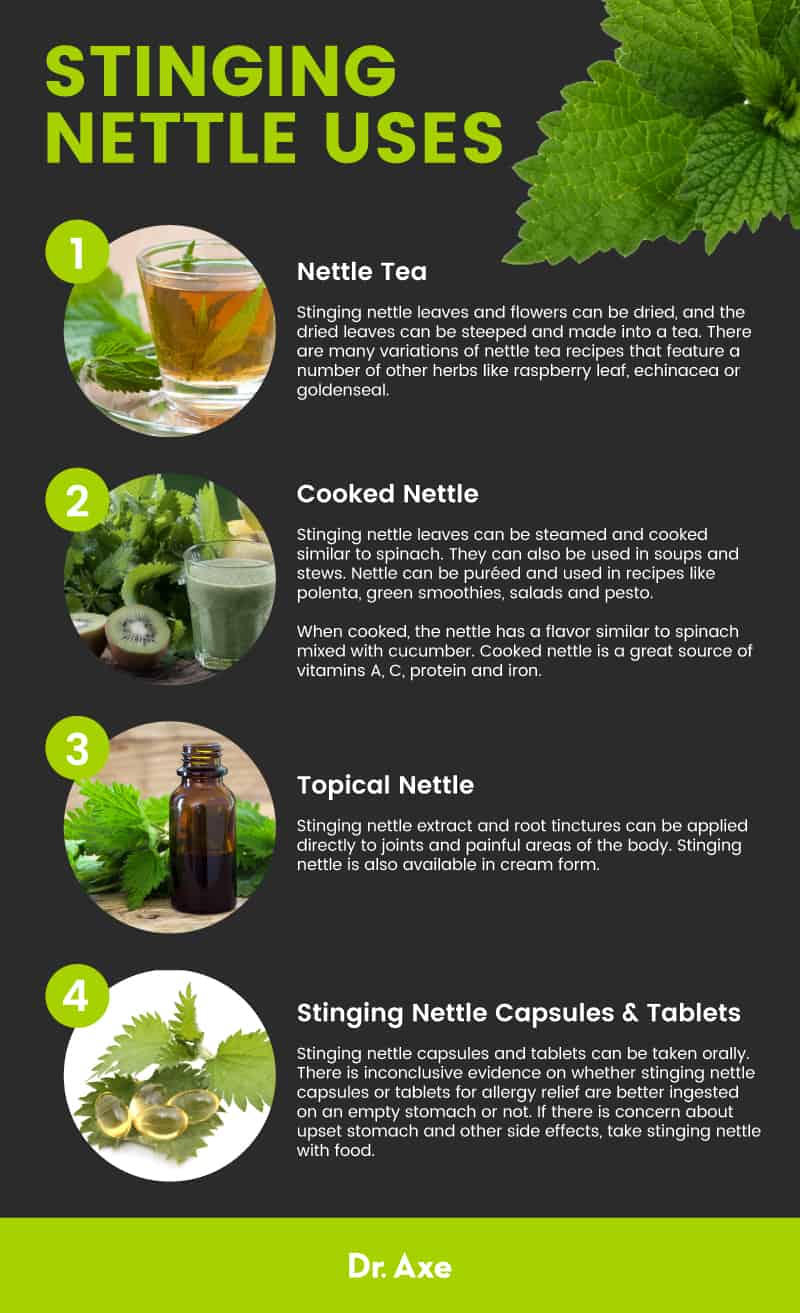 Certain products containing stinging nettle have shown that, when applied to the skin, it can reduce bleeding during surgery. The product, called Ankaferd blood stopper, is made up of alpinia, licorice, thyme, common grape vine and stinging nettle, and has also shown evidence of reducing bleeding after dental surgery. (10)

Eczema is a dry, itchy rash that can last on sufferers for a very long time. Because of stinging nettle’s antihistamine and anti-inflammatory qualities, it can be a natural treatment for eczema, as the Penn State University College of Medicine study referenced above notes. Sufferers can use a combination of nettle taken orally to tackle the eczema internally, as well as a cream to provide relief from the rash’s itch and redness.

More research is needed, but stinging nettle is also said to:

How to Use Stinging Nettle

Stinging nettle can be harvested or products can be purchased from a local health food store. Before purchasing or making a stinging nettle product, it’s important to identify whether your ailment needs the aboveground parts or the roots, as they have different pharmacological qualities.

Stinging nettle products come in dried or freeze-dried leaf form, extract, capsules, tablets, as well as a root tincture (suspension of the herb in alcohol), juice or tea. There is currently no recommended dose, because so many nettle products have varying amounts of active ingredients. Work with your doctor to determine the right dosage.

Some of the more common stinging nettle uses include:

Stinging nettle leaves and flowers can be dried, and the dried leaves can be steeped and made into a tea. There are many variations of nettle tea recipes that feature a number of other herbs like raspberry leaf, echinacea or goldenseal.

Nettle can also be used in other beverages, including nettle beer!

The roots, stems and leaves of stinging nettle are edible. The leaves can be steamed and cooked much like spinach. It’s best to use young leaves. They can be used in nettle soup or added to other soups and stews. Nettle can also be puréed and used in recipes like polenta, green smoothies, salads and pesto. Don’t eat the leaves raw because they will still have the stinging hairs until they are dried or cooked.

When cooked, the nettle has a flavor similar to spinach mixed with cucumber. Cooked nettle is a great source of vitamins A, C, protein and iron. (11)

Nettle extracts and root tinctures can be applied directly to joints and painful areas of the body. It’s also available in cream form.

How to Treat a Stinging Nettle Sting

If stung by the stinging nettle plant, it’s important not to touch or scratch the area. The chemical irritants can dry on the skin and be removed with soap and water. (12) Touching and scratching can push the chemicals further into the skin, extending the irritation time for days. Using duct tape or a wax removal product can help remove any additional fibers.

There are many people who choose dock plant for relief from nettle stings, despite studies showing it does not provide any medicinal benefits aside from making the irritated area feel cool. Crushed leaves from other plants like jewelweed, sage, as well as the stinging nettles leaves themselves release juices that can provide relief from the sting. Other traditional anti-itch treatments like aloe vera, calamine lotion and cold compresses can be used as well.

Once nettle is soaked or cooked in water or dried, the stinging quality is removed.

Folklore features stinging nettles often across many cultures and beliefs. Much of the lore involves suffering from a sting in silence or without itching or scratching the burning area.

In ancient Greece, nettles were used as a diuretic and a laxative by physicians Galen and Dioscorides. In Medieval Europe, it was used to treat and naturally reduce joint pain and also as a diuretic. People used to believe pulling it out by the roots and shouting an ill person’s name would eliminate a fever as well.

Stinging nettle has been used to make textiles like cloth and paper since Neolithic times. With fibers similar to hemp and flax, it’s a great alternative, sustainable fiber. Because the fiber is hollow, it provides natural insulation. The German army used nettle for their uniforms in World War I and used its leaves to dye uniforms in World War II.

Stinging nettles also were used to treat certain diseases by urtication, which is the process of beating the skin with nettles to stimulate blood circulation.

Stinging nettle is a very safe herb when used appropriately — although, there are a few precautions to take when starting to use it.

When harvesting: Always harvest stinging nettle with thick gardening gloves to avoid being stung. It’s also best to harvest young plant parts, preferably in the spring. They become more bitter after they flower and as they age.

When using with other herbs and supplements: As with any herb or supplement, it’s important to be cautious when mixing to avoid adverse side effects. You should always start an herbal supplement plan under the care of your health care provider. Patients may have to change their dosages of other supplements if they choose to take stinging nettle.

When you’re a diabetic: There is evidence that shows stinging nettle’s ability to affect blood sugar and interfere with controlling diabetes. It can also affect the strength of diabetes drugs and increase the risk of hypoglycemia. Diabetics who want to use stinging nettle should only do so under the supervision of their health care providers. Patients may have to change their dosages of medications if they choose to take stinging nettle.

When you first start: Some people have upset stomach, diarrhea or other mild reactions when they first take stinging nettle. It’s best to ease into usage, starting with a small dosage.

Stinging nettle can interact with the following medications: (4, 13)