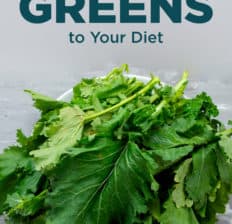 Turnip plants, which have the scientific name Brassica rapa, belong to the cruciferous (or Cruciferae) plant family, a nutrient-dense group of vegetables that includes other disease-fighters like kale, broccoli, cauliflower and cabbage — and of course turnip greens.

Why are turnip greens healthy? Like all leafy greens, they are among the richest food sources of vitamins, minerals and antioxidants.

Turnip greens nutrition is most researched in regard to its ability to fight inflammation. Inflammation, as you know, can lead to the development of such chronic diseases as heart disease and cancer.

Some other areas where these veggies really stand out include cancer prevention, bone health, and helping the body’s detoxification system and liver function.

Some evidence shows that this veggie was first domesticated in ancient Greek, Hellenistic and Roman times. Archaeological records show that mustard greens and radishes, two crops related to turnips, were both growing wildly in parts of Western Asia and Europe thousands of years ago.

Turnip greens are unique because they are biennial, actually taking almost two years to fully grow and reproduce. The first year their roots develop, and the second year their leaves and flowers form.

Because they are able to last through winter months and keep the soil fertilized, they have been an important crop used to maintain soil health throughout history.

Even though the starchy white root of the Brassica rapa plant tends to be more popular, the green leaves of turnips are actually where most of the nutrients are found.

Around the world these greens are sometimes referred to as “turnip leaves” or “turnip tops” (as they are called in the U.K.).

One study investigating turnip greens nutrition found that, by far, the greatest proportion of vitamins and minerals in turnip plants is found within the greens – with about 96 percent of the plant’s carotene (vitamin A) and about 84 percent of the B vitamins stored inside the leaf blades.

These greens contain an impressive range of important antioxidants, including one in particular that offers many disease-fighting benefits: glucosinolate. The amount of glucosinolate found in this plant actually beats the quantity in many other leafy greens and cruciferous vegetables – including nutrient powerhouses like kale and collard greens.

Glucosinolates, a large group of sulfur-containing glucoside molecules, are known for being one of the best cancer-fighting foods because they facilitate healthy cell production (mitosis) and stimulate cell death (apoptosis) within cancerous human tumors.

Two key glucosinolates that have been identified in studies in these greens include gluconasturtiin and glucotropaeolin. The human body actually seems to absorb these beneficial compounds better when cruciferous veggies are heated and cooked.

According to the USDA, one cup (approximately 144 grams) of cooked turnip greens contains about:

What is the difference between collard greens and turnip greens?

These two veggies are sourced from different plants, however they are in the same plant cruciferous family. Both are good sources of phytochemicals, fiber and essential nutrients (especially vitamins K, A and C), so one isn’t necessarily better than the other.

Collard greens tend to taste somewhat more bitter and are a bit tougher in terms of their texture, while turnip greens are usually more mild and tender. Because of their large size and firmness, collards are unique in that they can be used to make “wraps.”

The Brassica rapa plant is especially of interest to disease specialists because of the vast antioxidants present within the plant’s leaves.

Numerous studies show that diets high in antioxidants from fresh vegetables help fight against a number of illnesses, including:

One 2020 review states that cruciferous veggies possess “anti-obesity, anticancer, antimicrobial, antioxidant, hepatoprotective, cardioprotective, gastroprotective, anti-inflammatory, antianemic, and immunomodulator biological activities.” This means not only do they mainly have antioxidant capacities, but they also fight infections due to their antimicrobial effects.

Antioxidants in this veggie — including beta-carotene, quercetin and myricetin — counteract free radical damage and help naturally slow aging. They can help boost immune function and lower disease risk by reducing rates of oxidative stress, the kind of damage done by uncontrolled levels of free radicals.

Free radical damage to DNA can alter genetic material located inside of cells, therefore increasing the chance of cancerous cell development. Brassica rapa is a high source of glucosinolates, which a number of epidemiological studies have identified as having an inverse relationship with cancer development, especially cancers affecting the digestive system like colon, stomach, bladder and rectal cancers.

In animal studies, eating vegetables that contain glucosinolates is associated with lower rates of certain enzyme activities that result in DNA damage and cell mutation, which can lead to cancerous tumor growth.

Many more studies show that vitamin A and vitamin C, both highly present in leafy greens, also help protect the body from cancer. Studies show that cruciferous and leafy green vegetables are most closely tied to the prevention of bladder cancer, breast cancer, colon cancer, lung cancer, prostate cancer and ovarian cancer.

Cruciferous vegetable intake is inversely associated with risk of mortality due to heart disease in both women and men, according to a report published in the American Journal of Clinical Nutrition.

For example, oxidative damage to LDL (low-density lipoprotein or “bad”) cholesterol is believed to be one significant factor in the development of heart disease, but a major benefit of these greens is that they help lower LDL cholesterol.

Leafy green vegetables are also effective at lowering high blood pressure, high homocysteine, oxidative stress and inflammation — all of which may contribute to cardiovascular disease, heart attack or stroke.

Additionally, folate and fiber are two other nutrients found in turnip greens that make them excellent for protecting cardiovascular health. Folate is an important B vitamin that helps prevents harmful homocysteine buildup within the arteries, while fiber further helps lower LDL cholesterol levels.

Just one cup of cooked turnip greens provides over 600 percent of your daily vitamin K needs. This is significant for maintaining bone health and preventing bone breaks because low dietary vitamin K intake is associated with an increased risk of hip fractures in both men and women.

Especially as someone ages and the bones naturally become thinner, maintaining bone density by eating plenty of whole foods and exercising is important for reducing overall risk of bone breaks, osteoporosis and pain.

Research on Brassica rapa reveals that turnip greens contain carotenoid antioxidants − such as beta-carotene, lutein and zeaxanthin — that protect the eyes.

Lutein and zeaxathin, two major carotenoids in the human macula and retina, are also natural pigments found in various colored fruits and green leafy vegetables. These antioxidants may be protective against the development of eye diseases, like macular degeneration, because they absorb damaging blue light that enters the eye.

Although their effects are still unclear, research shows us that because antioxidants block light damage once absorbed, they help reduce effects of light scatter on visual performance and protect against the photochemical reactions that can damage the eyes over time.

Many studies suggest that there is strong benefit to consuming high levels of antioxidants from various vegetables and fruits in order to manage complications from diabetes. Another benefit of turnip greens nutrition is that its antioxidants can help defend the body from diabetes and lessen the risk for complications like eye disorders or heart disease.

High levels of free radicals can lead to damage of cellular enzymes that results in the development of insulin resistance, the primary cause of diabetes and other forms of metabolic syndrome. Free radicals are formed in diabetic patients by glucose oxidation, and as a result, people with diabetes tend to have increased levels of reactive oxygen species (free radicals).

Diabetics are more likely to have cataracts, high blood pressure and high cholesterol, as well as struggle with inflammation and weight gain — but antioxidants can help control these conditions by lowering oxidative stress.

Oxidative damage to fatty nerve tissue is associated with a higher risk for various forms of nervous system and brain disorders, including Alzheimer’s disease and dementia. One of turnip greens’ key antioxidant groups, called sulforaphanes, protects brain health and cognitive function because sulforaphanes have cytoprotective effects against oxidative stress.

In animal studies, when rats were given the kind of sulforaphane found in cruciferous vegetables in extract form and then exposed to high levels of oxidative stress within the cortex and hippocampus regions of the brain, they experienced significant neuro-protective effects compared to other rats that were not given sulforaphane.

The Brassica rapa plant, which also produces the large, white turnip root vegetable, is commonly grown in temperate climates worldwide. In most cases, harvesters of the turnip plant grow the crop for its white, bulbous root, which is a popular vegetable around the world for both human and livestock consumption.

Today, turnips and turnip greens are enjoyed around the world for their health benefits in many types of cuisines. For example:

In the U.S. and Canada, this veggie can usually be found at farmers markets in the late fall and winter months when they’ve been freshly harvested.

When buying turnip greens, look for leaves that are deeply colored and free from wilting. Avoiding limp and spotted leaves that have begun to spoil will ensure that the valuable antioxidants that turnip greens nutrition is known for are still present.

You can usually find turnip greens attached to their large white roots at fresh markets. Cut off the roots, and try roasting them, keeping the greens aside for quick blanching, stir-frying, or for adding them to dishes like soups and stews.

Do turnip greens taste like spinach? They are less mild than spinach and have more of a “bite.”

Both turnip greens and the white roots from the turnip plant have a pungent flavor similar to raw cabbage or radishes. Their taste is also described as similar to that of mustard greens, both having a signature sharp, spicy flavor.

Baby turnip plants are also grown around the world, although in smaller quantities. These come in yellow, orange and red-fleshed varieties and have a milder flavor, as opposed to the stronger-tasting larger turnips.

People usually prefer to eat the baby greens raw, such as in salads just like radishes are used, while the mature greens are normally chopped and heated.

How do you get the bitter taste out of turnip greens?

Any bitter taste of these greens can be reduced by boiling them quickly and then pouring them into fresh, cold water to preserve their bright green color. Most people prefer the taste of turnip greens when they are cooked and salted, since this helps make them more mild and versatile in recipes. Heating/cooking them also makes them more tender.

To quickly cook your greens and release some of the nutrients, bring a pot of water to a boil, add the cleaned greens for only two to three minutes, and then drain and discard the water. 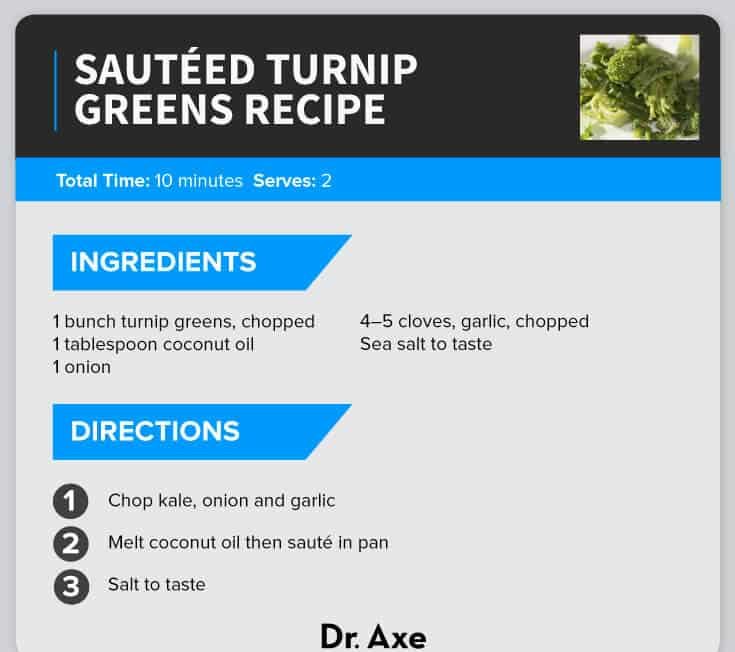 Like other leafy greens, turnip greens contain a low level of oxalates, naturally occurring substances that are found in a variety of whole foods that can sometimes crystallize and cause health problems for certain people.

Oxalates don’t pose a risk for most people but can become problematic for anyone with existing kidney or gallbladder problems, such as kidney stones or gout, so you might want to speak to your doctor about specific restrictions if you have one of these known conditions.

10 Signs of a Protein Deficiency + How to Fix
3

11 Foods With More Protein Than an Egg
4