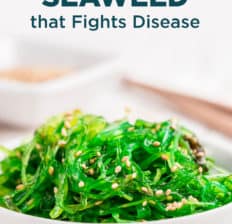 Seaweed has long been a staple of Japan, which is one of the longest-living cultures in the world and home to one of the remarkable blue zones. Is there a connection? You bet — most notably, a Japanese seafood known as wakame is rich in a number of vitamins and minerals that can combat disease and support longevity.

Wakame provides a great nutritional boost of vital nutrients and has been linked to a range of health benefits.

A promising study conducted at the University of California even suggests that wakame may lower breast cancer incidence and mortality among postmenopausal women. No wonder Japanese sea farmers have been growing wakame for hundreds of years.

Like many sea vegetables, it adds a delicious component to a variety of meals, but recently it has gained popularity because of its many health benefits.

Wakame is a brown or deep green seaweed with a silky texture that is commonly used in Japanese cuisine. The scientific name for wakame is Undaria pinnatifida.

It comes from the cold-temperature waters off the coasts of Japan, China and Korea. This seaweed has a briny and slightly sweet flavor that is overall quite mild.

Wondering about the correct wakame pronunciation? It’s generally pronounced wuh-kah-mee, but in Japan, they say wah-kah-me.

In Japan, this seaweed has been eaten for around 3,000 years. Archeologists discovered in cookware this tasty seaweed’s residue sticking to pots and pats from that long ago.

Fast-forward to a time still long ago, and this seaweed was a highly prized commodity. In the 1700s, it was even used as a form of tax payment along with nori and arame.

When the macrobiotic diet became popular in the United States in the 1960s, it became much easier to find wakame at health stores and Asian-American grocery stores.

Today, it’s very likely on the menu of your local sushi bistro, but you may not have realized it. Not only is it commonly used as the main ingredient for seaweed salad, but it’s also a common start of miso soup.

What is miso soup? Miso soup is a traditional Japanese soup that typically includes a stock called dashi, miso paste and wakame seaweed. Other ingredients can vary by the maker or the region.

The benefits of wakame come from the seaweed’s nutrition content. It’s rich in vitamins and minerals, such as folate, vitamin B2 and manganese.

It has been used for centuries for its therapeutic and healing properties, with the power to support cardiovascular health, boost energy levels and supply the body with omega-3 fatty acids. Like other seaweed nutrition, wakame nutrition is quite impressive.

100 grams of raw wakame contains about:

The nutrients present in wakame contribute to its benefits on our overall health. Here’s a rundown of the top wakame health benefits:

An important component in wakame, fucoxanthin, has been shown to exert an anti-diabetic effect on animal study subjects. A 2009 study conducted in Japan examined the anti-obesity and anti-diabetic effects of fucoxanthin-rich wakame lipids on obese mice. When it was added to the high-fat diet, it significantly suppressed body weight.

Before the wakame treatment, the mice showed signs of hyperglycemia, hyperinsulinemia and hyperleptinemia, but adding this seaweed into the diet normalized these conditions. The researchers concluded that wakame has the ability to prevent diabetes, related disorders and obesity by reversing insulin resistance that is due to a high-fat diet.

A Japanese study conducted at Hokkaido University suggests that the fucoxanthin present in wakame promotes fat burning within the fat cells of animals.

According to the study, fucoxanthin fights fat in two ways: It encourages the action of protein that causes fat oxidation and is found in the type of fat that surrounds organs. It also promotes DHA production in the liver, which helps decrease bad cholesterol or LDL.

Another study found that fucoxanthin reduced abdominal white adipose tissue weights of rats and mice, thereby making it one of the great fat-burning foods.

In fact, a study published in the American Journal of Obstetrics and Gynecology found that women who had lower levels of manganese in their blood experienced more pain and mood-related symptoms during PMS and menstruation.

One hundred grams of wakame provides 15 percent of your daily value of calcium, which is essential for preventing osteoporosis. Research indicates that calcium-rich foods help increase bone growth and speed up bone repair, while a calcium deficiency or lack of calcium in the diet means that the body will take calcium from the bones and decrease bone mass.

Although children often get their calcium from dairy products, adults can ensure they get enough calcium with seaweeds, fish, and green and yellow vegetables.

Getting enough calcium in the diet regularly is key since our bodies lose calcium on a daily basis through shedding hair, skin and nails and through the release of sweat, urine and feces.

5. Lowers the Risk of Breast Cancer

There is a small body of research that suggests there is a relationship between seaweed and a decreased risk of breast cancer. In Traditional Chinese Medicine and Japanese folk medicine, seaweed is used to treat tumors.

Data shows that people who eat seaweed regularly, most notably in Japan, have dramatically lower rates of breast cancer.

Another interesting study suggests that the fucoxanthin found in wakame may act as a chemopreventive and chemotherapeutic compound in colon cancer cells.

Science seems to back these wakame benefits, and more studies are being conducted to assess its efficacy as a cancer treatment or preventive measure. So far, it appears to be a powerful cancer-fighting food.

Folate, or vitamin B12, is an essential vitamin is present in wakame. It’s needed for copying and synthesizing DNA, producing new cells, and supporting nerve and immune function.

Folate is known to be one of the most critical vitamins for a healthy and vibrant pregnancy.

For pregnant women, a folate deficiency is especially risky because it may lead to neural tube defects, such as spina bifida, anencephaly, malformations of the limbs and heart complications. Because folate is needed for DNA copying and building new cells, it’s vital that pregnant women eat enough folate foods, like wakame, to decrease the risk of developmental issues.

Several studies have investigated whether wakame has the ability to naturally prevent high blood pressure. One such study, published by Annals of Nutrition and Metabolism, found that wakame treatment significantly decreased systolic blood pressure of spontaneously hypertensive rats.

Another study conducted in Japan supported that dietary wakame may have beneficial effects on hypertension.

An interesting study on the topic was conducted in 2011 and examined whether seaweed might affect blood pressure in children. Healthy Japanese preschoolers, aged 3–6 years, had their blood pressure and pulse measured before and after a three-day period that involved seaweed intake. Blood pressure measurement, complete dietary records, and parent-reported height and weight were obtained for 223 boys and 194 girls.

The fucoxanthin present in wakame serves another purpose: It stimulates the liver to produce DHA, helping reduce the amount of harmful cholesterol in the body. Therefore, it’s a great cholesterol-lowering food.

A study published in the Journal of Nutrition found that dried wakame powder altered the activities of enzymes involved in fatty acid metabolism in the liver in rats. The rats that were fed diets containing the seaweed powder had lower triacylglycerol levels, suggesting that wakame seaweed is useful as a food to prevent hyperlipidemia.

Hyperlipidemia means that there are too many lipids, or fats, in the blood. This leads to high cholesterol and high triglycerides, which can lead to the development of plaque and dangerous blockages.

The iron in wakame increases the production of red blood cells and helps with the metabolic enzyme processes that the body carries out to digest proteins and absorb nutrients from food. An iron deficiency is the world’s most common nutritional deficiency and has been shown to contribute to developmental delay, impaired behavior, diminished intellectual performance and decreased resistance to infection.

Excessive iron supplementation can cause iron overload and should be avoided, so the safest and purest way to get enough iron per day is to stick to iron-rich foods like wakame.

Wakame is a rich source of omega-3 fatty acids. These are essential fatty acids because omega-3 is not made by the human body, but it is still needed for normal metabolism.

Because of the excess consumption of omega-6 fats in the Western world, it is important that we crowd in omega-3 foods that our bodies need. 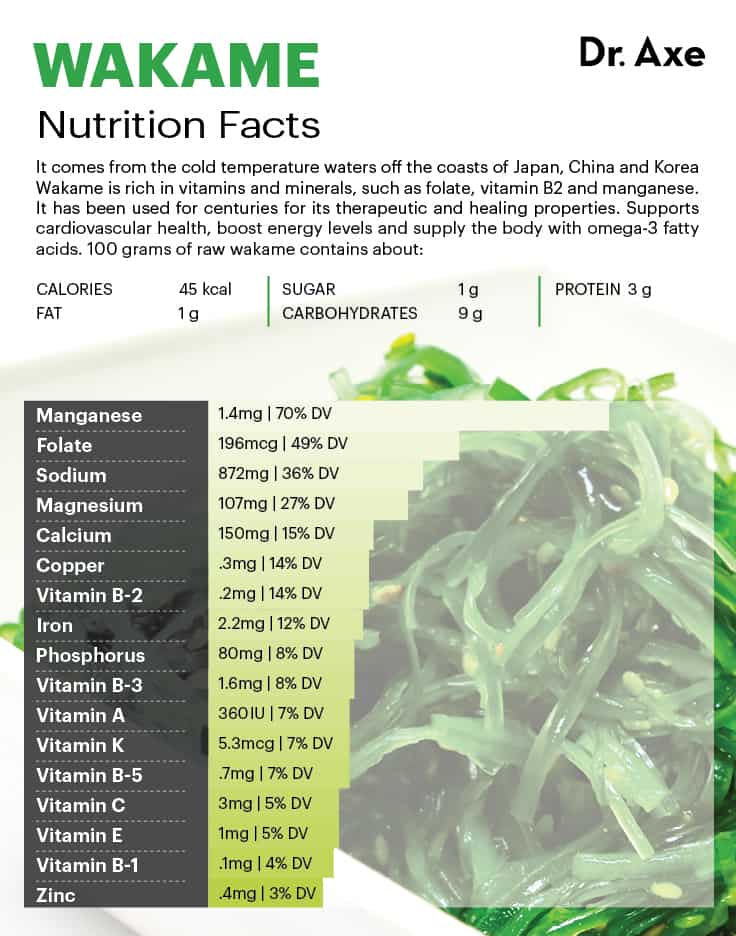 Wakame vs. Nori (Plus Other Seaweed)

Before we start comparing some common seaweeds, let’s answer this question: Is seaweed a vegetable?

Technically, seaweed is a form of algae, but seaweeds are often referred to as “sea vegetables” and often treated as vegetables for culinary purposes.

What eats seaweed? In addition to humans, seaweed (in its natural environment) is commonly consumed by sea urchins, sea snails and plant-eating fish, such as the rabbit fish and parrot fish.

There are three main varieties of seaweed commonly used as food: wakame, nori and kombu seaweed. However, these are definitely not the only edible seaweeds.

Other consumable options, include

While wakame is eaten fresh or dried, nori is mainly available in dried form. What is nori? It’s the most common papery seaweed wrapping for sushi rolls, and unlike wakame, it is never soaked before serving.

Nori is best eaten wrapped around other items (like sushi) or toasted.

Kombu is a member of the kelp family, and like wakame, it’s a brown seaweed. Kombu is commonly used to make dashi, a flavorful broth traditional to Japan and used to make miso soup.

Kombu and wakame have many overlapping health benefits and a similar flavor profile, but wakame is slightly sweeter. Both kombu and wakame are commonly used in seaweed salads and soups.

Kelp belongs to the brown algae class (Phaeophyceae), and kombu is a specific variety of kelp that’s extremely common in Japanese, Chinese and Korean food. It can be used in salads, soups and smoothies, and there’s also kelp sushi.

As with “land vegetables,” sea vegetables also have unique individual health perks as well as many overlapping benefits. Overall, wakame, nori, kombu and kelp are all distinctly different yet share similarities in their flavor profiles, uses and potential health benefits.

Where to Find/How to Use

Wondering where to buy wakame seaweed? You can find it dried or fresh in grocery stores, health stores or online.

Can wakame be eaten raw? Yes, it can be eaten fresh or as a dried seaweed food.

Fresh seaweed, which has a silky texture, should always be stored in the refrigerator, while dehydrated seaweed should be stored in an airtight container in a dark, dry place.

If you have dehydrated wakame, start by cutting it into small pieces, as it will expand after being rehydrated. To rehydrate dried wakame seaweed, soak it in water for about 30 minutes or until it is soft.

It can then be added to soups, stir-fries and salads. The water used to rehydrate the seaweed is also full of nutrients, so it can be used as the base of a soup.

Whenever you buy or consume any type of seaweed, it’s important to opt for  organic because of seaweed’s inherent ability to absorb what’s in the water around it.

Wakame is a versatile seaweed that can be added to so many dishes. Here are some simple ideas to get you started:

Although wakame is a nutritious food that offers numerous health benefits, it does contain a good amount of sodium (about 872 milligrams in one ounce). People with high blood pressure or other health conditions where sodium intake is a concern may want to watch their seaweed intake to make sure that they don’t consume too much sodium in one day.