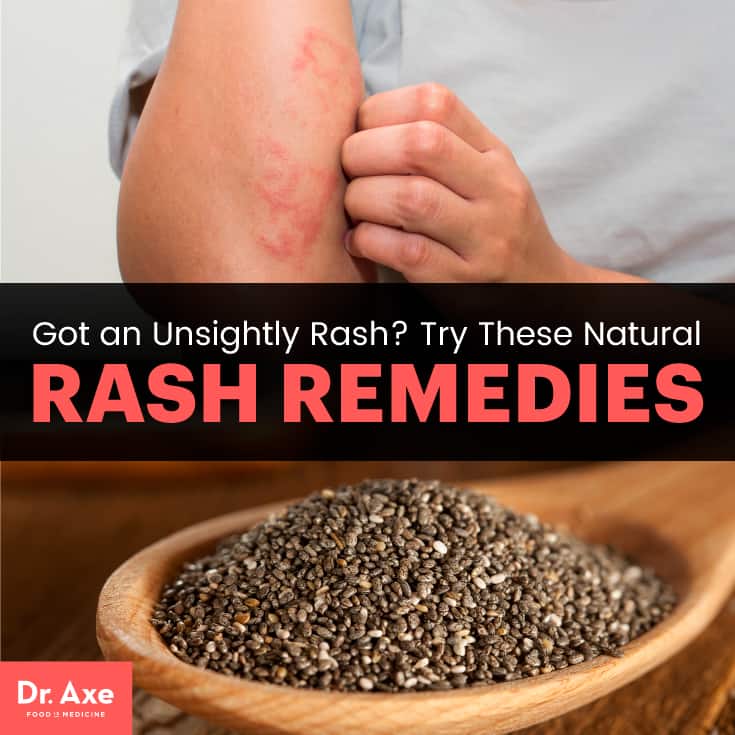 No matter your age, you’ve probably experienced a rash at some point in your life, but do you know how to get rid of a rash? Rashes come in so many varieties. Sometimes the reason may be obvious (like a rash caused by poison ivy) while other times it can be really hard to put your finger on the root cause. Rashes can be caused by an allergen or food irritant, clothing or household chemicals. Medications, poor digestion, or illness may also cause rashes or hives.

Some rashes come out of nowhere while others take several days to form on your skin. How long does it take for a rash to go away? Well, it depends on a few factors including what type of rash it is and how quickly the inflammation can be reduced. Some will go away as quickly as they appeared while others may linger for longer periods of time. The good news is there are many natural rash home remedies that can work fast without adverse side effects. If you’re experiencing a rash this very moment, I’m sure you’re eager to know how to get rid of a rash fast!

What Is a Rash? + Signs and Symptoms

A skin rash is a change of the skin which affects its color, appearance, and/or texture. A rash can also be defined as  an area of irritated or swollen skin. A fancier, medical word for a rash is dermatitis. An itchy rash is called allergic contact dermatitis. (1)

Rashes can occur all over the body. Sometimes they are very localized while other times they are widespread. There is a wide variety of symptoms and characteristics of skin rashes including: (2)

When it comes to how to get rid of rashes and their unpleasant symptoms, there are a lot of natural rash home remedies, but first let’s talk about types of rashes.

Saying you have a rash is not an exact medical diagnosis. Rather, it’s just a way of describing the skin inflammation and discoloration you are currently experiencing. You know that your skin does not look like it normally does, something is off and you may or may not know the true medical reason behind the rash.

There are many types of rashes that can better explain and pinpoint the cause of the change in your skin’s appearance. For example, some of the most common rashes include: (3)

Before we get to how to get rid of a rash naturally, let’s look at the common causes and risk factors of a rash. The type of rash can also explain the cause of the rash. For example, if you have a stress rash, then the cause is stress, and a poison ivy rash is caused by poison ivy.

In general, rashes are caused by skin inflammation which in turn can have many causes. One of the most common forms of a rash is contact dermatitis, which occurs when a substance of some sort irritates the skin. Contact dermatitis may cause mild redness of the skin or a rash of small red bumps. A more severe reaction may cause swelling, redness and larger blisters.

Common causes of contact dermatitis and its resulting rash include: (4)

Other common causes of rashes:

When it comes to rash risk factors, having a viral, bacterial, fungal or parasitic infection all put you at greater risk for developing a rash. Also, a family or personal history of allergies or asthma raises your rash risk. Since rashes are commonly the result of contact with poison ivy, poison sumac, and poison oak or from insect bites then it’s not surprising that people who spend more time outdoors have a higher risk of developing a rash. (5)

Now that we’ve talked so much about the various rash types, causes and risk factors, let’s get to the solution sections: how to get rid of a rash.

Getting rid of a rash using conventional treatment almost always includes a topical ointment or cream commonly including over-the-counter as well as prescription-strength corticosteroids such as hydrocortisone. In fact, long-term use of corticosteroids is known for causing thinning of the skin among other side effects. (6) Other conventional treatment of how to get rid of a rash varies depends on the specific diagnosis of the rash.

How to Get Rid of a Rash: Natural Rash Home Remedies

Organic foods — By choosing organic foods, especially when it comes to produce’s dirty dozen, you help to reduce your exposure to toxins and chemicals.
Orange and yellow fruits and vegetables — These provide carotenoids like beta-carotene, which studies have shown can can help improve resistance to rashes triggered by the sun. (7)
Clean lean protein — Sufficient protein helps the immune system guard against infections that cause rashes. Aim for three to four ounces of protein minimum per meal. However, shellfish is a protein that is known to be problematic for many people.
Flax and chia seeds — Can reduce systemic inflammation leading to a reduction in symptoms. I recommend adding ground chia or flax seeds to salads and smoothies.
Cold-pressed oils — Look for oils that are not heated above 129 degrees during pressing such as olive oil and coconut oil.

Any food that causes an allergic reaction — This can vary from person to person. Some common allergens include: gluten, nuts, shellfish and dairy.
Conventional Dairy — Many people find that eliminating conventional cow’s dairy helps decrease symptoms.
Trans fats and hydrogenated oils — These fats increase inflammation, which may lead to immune reactions.
Fried foods — These foods are difficult to digest and are known to increase inflammation, which can only make rashes worse.
Processed foods — Many processed foods contain additives (under the term “natural flavors” or certain food dyes) that can cause allergic reactions in certain people. You should also check out my 6-Step Checklist to Avoid the Worst Ingredients.

#1 Vitamin C (2,000mg daily)
Vitamin C is a powerful antioxidant and has antihistamine properties, which can help to reduce the inflammation of a rash.

Using essential oils topically like geranium, rose and lavender can help to improve rashes. Simply combine three drops of oil with a half teaspoon of coconut oil and apply it to the problem area three times per day. I also highly recommend this DIY Rash Cream with Aloe & Lavender.

Bentonite clay benefits the body by helping it to expel toxins, increasing immunity and reducing inflammation. (8) When it comes to how to get rid of a rash on your face, if you’re using bentonite clay or any other natural remedy just make sure to avoid the eye area. If you have an itchy rash, my DIY Anti-Itch Cream with Bentonite Clay can really help to calm things down. For bug bites, apply a concentrated amount of the clay directly to the trouble area and let it sit for about two hours before rinsing it off.

Cocoa butter contains compounds called cocoa mass polyphenols, which some studies have found can help diminish signs of aging, plus soothe sensitive skin suffering from rashes. Polyphenols are types of antioxidants that promote health both internally when eaten and when used topically on the skin. In fact, cocoa’s polyphenols have been found to fight various chronic diseases, degeneration of the skin, sensitivities and even cell mutations. (9) Just make sure the cocoa butter you use doesn’t contain any alcohol, fragrance or other additives that can lead skin to become even more inflamed and sensitive.

Hopefully, you are only dealing with a minor rash and the many ways of how to get rid of a rash naturally will be effective for you. However, if you have a rash that lasts longer than a few days with no explanation or is getting progressively worse, it’s a good idea to see your doctor.

You should also seek immediate medical attention if you experience any additional symptoms such as: (10)

Contact your doctor if you have a rash as well as a sore throat, joint pain, a recent tick bite, a recent animal bite or red streaks/tender areas near the rash.

Rashes are an extremely common occurrence. Most of the time, rashes can be successfully treated with natural home remedies. Sometimes, rashes are more serious and if you have additional symptoms, then you should certainly seek immediate medical attention.

There are so many varieties of rashes, but they all involve inflammation and irritation of your skin. Thankfully, there are many tried and true natural ways to make that rash a problem of the past quickly and easily. Remember that your diet plays a big part in helping to improve a rash as does what you put on your skin on a regular basis.

I really hope you are avoiding any food products with unhealthy additives while also steering clear of body care and personal products that have synthetic fragrances as well as other seriously health hazardous ingredients. What you put on and into your body can definitely influence your likelihood of a rash as well as how to get rid of a rash quickly.

Read Next: 13 Best Ingredients for Your Natural Skin Care Ritual

How to Get Rid of Jock Itch: 9 Natural Remedies
4

How to Get Rid of Cellulite — 6 Natural Treatments
5

The Best Natural Skin Care Ingredients for Your Beauty Routine

Home Remedy for Sunburn, with Aloe and Lavender Oil

How to Get Rid of Cellulite — 6 Natural Treatments