Have you ever had a cough that sounds similar to a barking dog or seal? Well, then, you’ve unfortunately had experience with croup cough.

What is croup exactly? It’s a viral infection that’s most common in children, especially during the fall and winter months. Croup often starts as what seems like a harmless, mild cold, but then it can quickly get more serious and even lead to further complications, including ear infections and pneumonia. (1) Croup in babies and croup in toddlers can be especially scary since the young patient is unable to talk about what he or she is experiencing in any given moment. Croup in adults is possible too, so parents also have to take preventative action when taking care of a sick little one.

Is croup cough contagious? Unfortunately, it’s quite contagious, especially during the first few days of illness. It’s pretty much as contagious as the common cold and can easily be spread from an infected person’s bark-like croup cough. It’s definitely the croup cough sound that really distinguishes it from other ailments.

So … is croup’s bark worse than its bite? Let’s take a look at the symptoms and possible complications as well as effective ways to naturally prevent and treat croup. Croup cough natural remedies are thankfully easy, inexpensive and free from harmful side effects.

What Is a Croup Cough?

Croup is a common respiratory illness that occurs in children and causes a change in breathing along with a hoarse voice and barking croup cough. When you have croup, you have an infection of the vocal cords (larynx), windpipe (trachea) and bronchial tubes (bronchi).

Children with croup should be considered contagious for three days after the illness begins or until the fever is gone. A viral infection that causes croup in a young child can cause a cough or sore throat in an older child or adult. However, it’s unlikely to cause the same intense breathing difficulty experienced by a child who has croup. In rare instances, full-blown symptoms of croup can occur in teenagers and adults. (3)

At first, a child with infectious or viral croup will likely have symptoms similar to the common cold, such as a runny nose, nasal congestion and fatigue. He or she may also have a mild sore throat and/or a low-grade fever. As the virus spreads, it starts to inflame, irritate and narrow the lining of the voice box and windpipe. This leads to croup’s giveaway symptoms of a barking cough and stridor (loud, raspy breathing). Symptoms are often worse at night. Infectious or viral croup usually runs its course within three to seven days with symptoms often improving within 48 hours.

It can be hard to distinguish spasmodic croup from infectious croup, but spasmodic croup usually comes on suddenly. Spasmodic croup can be triggered by infection or allergies, but it isn’t caused by an infection. It also has a tendency to come back again.

With any case of croup, a child may have a harder time breathing than usual. This is a result of his or her larynx tissue becoming inflamed, which in turn constricts the windpipe. To further complicate things, mucus may block the bronchial passages. Put all of this together and you can better understand why your child may have the croup symptom known as stridor. What is stridor? It’s an abnormal, high-pitched, musical breathing sound. It’s also sometimes described as a hollow or raspy noise similar to the voice of Darth Vader from the movie “Star Wars.”

Croup is most common in the younger members of our population. Children between the age of 6 months and 3 years are most at risk for contracting croup. The peak incidence occurs around 24 months or 2 years of age. (5)

Spasmodic croup tends to run in families and can be triggered by an allergic reaction. Children who have asthma as well as children born prematurely are more likely to develop more severe symptoms of croup. (6)

The majority of croup is caused by a human parainfluenza virus (HPIV). Specifically, both HPIV-1 and HPIV-2 cause croup. HPIV-1 most often causes croup in children. (7)

The viral form of croup is mainly spread by airborne droplets from an infected person’s coughing or sneezing. You also have to be careful about touching infected items or surfaces and then touching your mouth, nose or eyes since croup can also be spread from contact with surfaces that have been contaminated. The virus is strong and can survive on inanimate objects for some time.

Antibiotics are not helpful for croup since it’s typically caused by a virus rather than bacteria. Conventional treatment typically involves over-the-counter cough and cold medications. In some cases, a pediatrician may also prescribe steroids like dexamethasone, prednisone or prednisolone to decrease airway swelling. For severe cases of croup, kids are sometimes put on breathing treatment that contains a medicine called epinephrine, which quickly reduces swelling in the airways.

OTC medications, steroids and epinephrine may all reduce symptoms quickly, but they’re not without their harmful side effects. In some severe cases, especially ones involving young children, hospitalization is sometimes necessary. How do you know if you should take your child to the hospital? Breathing difficulties pose the greatest concern and risk for complications. If your child is having serious difficulty breathing, you should seek medical evaluation immediately.

The good news is most croup cases tend to be mild and can be managed with home treatment. (8) On average, less than 5 percent of all children with croup require hospitalization. (9) Now let’s talk about some natural ways to treat croup. 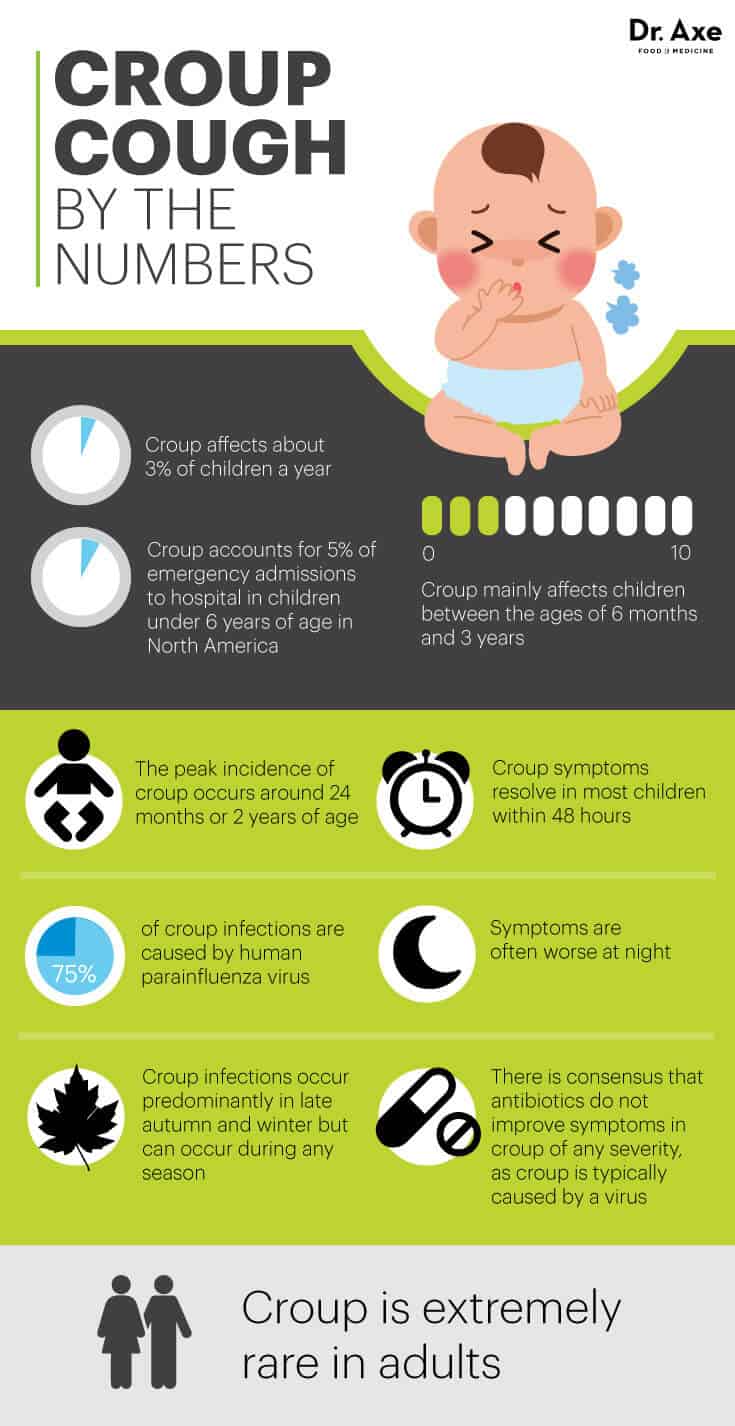 More than 95 percent of croup cases can be successfully treated at home. According to Dr. Kimberly Giuliano, a pediatrician at the Cleveland Clinic, most croup will go away on its own. She is adamant that parents should avoid treating their children with over-the-counter cough and cold medicine.

“They cause significant side effects,” she says. “In addition, research has shown that for croup and other kinds of coughs and colds, they’re really not any more effective than giving your child a placebo.” (10)

Giuliano has a few natural remedy ideas if you or your child has wheezing, labored breathing or stridor. She suggests two easy things you can do at home: steam and cold air. Let’s talk about these easy yet effective options plus a few more. These natural remedies can help to heal croup and also keep it from getting worse and more complicated.

Breathing in moist air always helps anyone having upper respiratory and breathing issues. For immediate relief, you can go into your bathroom, shut the door and then turn the shower on the highest heat setting. Do not go into the shower or let your child go into the shower. Instead, sit or stand outside of the shower while it runs and breathe in the warm steam for a good 10 minutes.

You can also use a cool mist humidifier at night in the bedroom. This will put a continuous stream of warm mist into the air during the night, which can reduce coughing and making breathing easier. Spasmodic croup commonly improves tremendously with the use of just a cool mist vaporizer.

It might sound strange, but if you or your child is looking for immediate relief from croup-related breathing problems, you might want to head to the kitchen. Next, go to the refrigerator and put your face or your child’s face in front of the open freezer for a minute or two.

Another natural remedy actually involves going outside into the cold night air. Dr. William Sears, a pediatrician, recommends properly bundling up your child (or yourself) and going outside for 10 to 20 minutes. You can also take a slow car ride with the windows open. Of course, this remedy does not work during warmer months, and it’s essential that the patient is properly dressed. Make sure to include a hat if it’s cold enough, especially if you’re choosing the driving option. It’s said that the misty night air is why babies with croup often get better on the ride over to the emergency room. (12)

Drinking lots of fluids is always a recommended treatment for croup by both conventional and holistic health practitioners. Just like with the common cold, it’s very important to keep a croup patient well-hydrated. Of course, water is the No. 1 choice for hydration. For babies, breastmilk is key while older children can benefit from soups, broths, coconut water and healthy homemade fruit pops.

By staying hydrated, it helps replace any fluids lost from a fever, and it also makes it easier for your body to fight the infection. Warm liquids like soup and herbal tea are excellent at helping relax the vocal chords and loosen sticky mucus, which can soothe that barking cough. It’s also important to avoid mucus-encouraging foods like dairy, sugar and processed foods.

Rest is essential to healing from the croup. However, anyone with croup should not rest in a flat position. By propping your child (or yourself) up in bed with pillows, it helps make breathing easier and coughing less likely.

For older children using beds, you can raise the head of the bed to help natural mucus drainage and make breathing easier. For babies and infants, you can put books under the crib mattress to create an incline. (13)

It’s important as a parent to remain calm when your child has croup so you can be a comfort to your patient. The barking croup cough sounds intense to you so imagine how it sounds and feels for your little one. It’s also important for your child’s breathing that you stay calm and keep him or her calm because stress only makes breathing difficulty worse. By helping your child feel safe and distracted with fun books and games you can encourage a faster healing process. (14)

Naturopathic pediatricians typically recommend rubbing your child’s chest with essential oils in a base oil like coconut oil. Some recommended essential oils for croup include tea tree, thyme and lavender. I highly recommend making a homemade vapor rub to have on hand for situations like this. (Note: Eucalyptus should be avoided in children 2 and under.) You can swap out essential oils as desired. Just always make sure to perform a small skin patch test (for example, on your child’s forearm) to rule out any possible allergic reactions.

Croup Cough by the Numbers

If you do have to seek emergency care for your child, it’s important to stay calm and try to keep your child as calm as possible. Stress and fear only make breathing more difficult for your sick child.

Seek medical attention immediately if your child is exhibiting signs of dehydration, high fever, difficulty breathing, drooling and an inability to swallow saliva. He or she may have acute epiglottitis, which is an uncommon yet possibly life-threatening infection of the epiglottis.