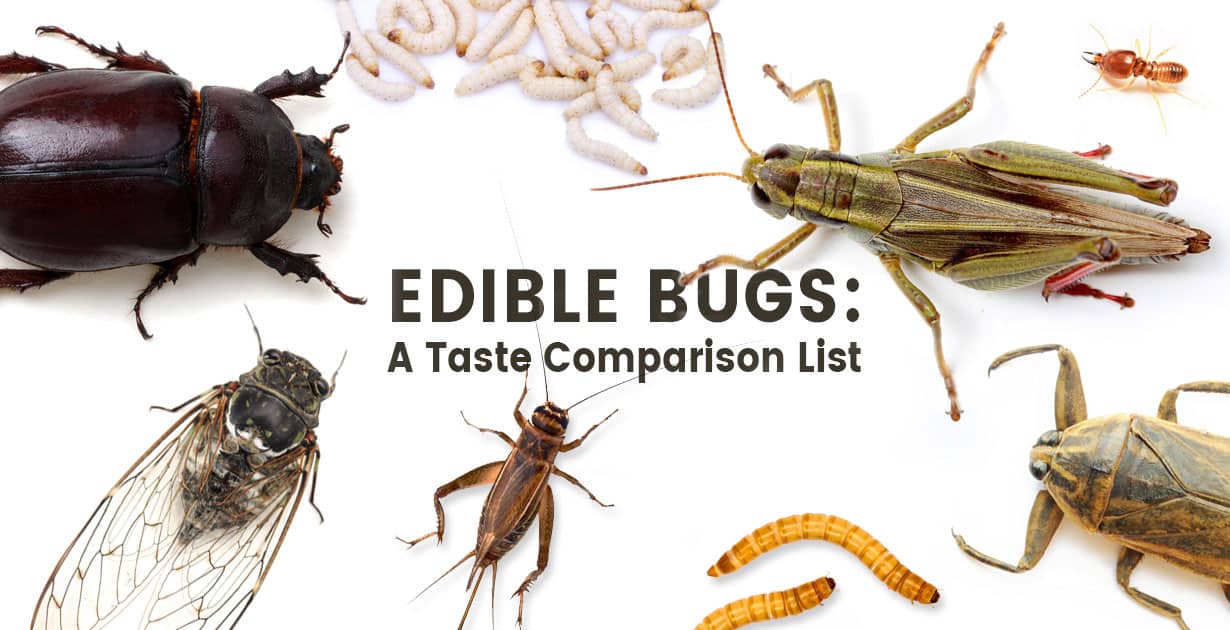 Did you know that humans have been chomping down on edible bugs for thousands of years? Yes, it’s true and today, eating bugs is actually quite common if you go outside of the United States. Recently, insects are being touted as the “protein of the future” as pasta made with grasshoppers and crickets is being sold in France.

Currently, around two billion people around the world are eating a wide array of bugs (raw and cooked) on a regular basis. If that’s not surprising enough, apparently there are over 1,900 edible insect options on planet Earth. (1)

Can eating bugs actually be safe? What about healthy? The short answer to both questions is: yes, if you choose and prepare certain edible bugs correctly. After reading this article, you may (or may not) think of some insects as more than just unwanted creepy crawlers. Let’s take a look at the wild world of entomophagy. This information may really come in handy if you spend extended time in the wilderness or if you’re just someone who loves a good culinary adventure.

There are a lot of different organisms that consume insects and bugs including mammals, birds, reptiles, amphibians and invertebrates. In some places around the world, entomophagy is actually common too. What is entomophagy? Entomophagy is defined as the consumption of insects as a source of nutrition by humans. (2)

In the United States, we’re not often ordering insects off of restaurant menus or even cooking them up in our own kitchens. However, this is just the opposite of what goes on in many other countries. Some countries where insect eating is said to be common include China, Brazil, Mexico, Thailand and Ghana.

What bugs/insects can you eat? As I said early, there are actually 1,900 edible bugs according to a report by the U.N. Food and Agriculture Organization. (3) Can you eat worms? Can you eat leeches? You probably are wondering about a lot of insects. I can’t list all of the almost 2,000 alleged edible bug options so let me just tell you some of the most common edible insects.

Some specific examples of edible bugs: (4)

Since ant eggs made the list, you’re probably wondering can you eat ants and what do ants taste like? Yes, it does appear that certain types of ants are eaten in various locations around the world. For example, some Brazilians enjoy queen ants fried or dipped in chocolate. Consumers say that these queen ants taste like mint. (5) Other human ant eaters say that ants have a sour, citrusy flavor or that they taste like vinegar. So what ants taste like seems to vary by your choice of ant. (6)

Similar to why I don’t eat pork, I suggest shortening this edible bugs list to be in line with Biblical eating principles. So what bugs does that Bible say we can eat? According to Leviticus: “‘But you may eat certain insects that have wings and walk on four feet. You may eat those that have legs with joints above their feet so they can jump. These are the insects you may eat: all kinds of locusts, winged locusts, crickets, and grasshoppers.” (7)

So according to the Bible, these are the three edible insects:

In general, edible insects have a good amount of nutrition including macronutrients and micronutrients. Some bugs, like crickets, are especially impressive when it comes to protein. Cricket flour, for example, contains 81 grams of protein in just one cup! Meanwhile, a typical all purpose flour only contains about six grams of protein. Crickets even rival beef when it comes to protein content. A 100 gram serving of crickets offers about 21 grams of protein while the same servings size of ground beef rings in slightly higher at 26 grams. Many edible insects are also rich in fiber, which is not true for animal protein sources. (8, 9, 10, 11)

Some people believe that eating insects is the way of the future or the protein of the future. As food demand increase around the world, edible bugs provide a cheap, easy and alternative source of protein. (12)

Cuts Down on Plant Pests

Looking to get those grasshoppers out of your organic garden? One of the most obvious benefits of consuming edible bugs is that it’s a safe way to help reduce plant pests without using dangerous and health hazardous insecticides.

Easy on the Environment

To farm bugs obviously takes up a lot less land than what is required for much larger animal protein sources like cows. Bugs are also said to convert what they consume to protein much more efficiently than many animal food sources. Specifically, bugs are said to require 12 times less feed to produce the same amount of protein as cattle, pound for pound. Bugs also need about half as much nourishment as chickens and pigs to produce an equal amount of protein on a pound for pound basis for their consumers. Overall, entomophagy is considered a low environmental impact food source. (13)

Can you eat leeches? Can you eat maggots? Leeches and maggots are two insects that may land on edible bug lists, but there is good reason to think twice. As always, you should consider what the animals or insects you find on your dinner plate have consumed.

Maggots are the larva of flies and what maggots eat really couldn’t get more offensive. I’m talking about things like decaying and rotten food, fecal matter, and even human flesh to name a few. So what happens if you eat maggots? Consuming maggots, by humans or animals, can result in myiasis specifically intestinal myiasis, which is when fly larvae inhabit the gastrointestinal tract and can then implant themselves in other vital organs. This is an extremely serious parasitic infection that can bacterial infections, sepsis and if left untreated, death. (14)

Leeches, as you probably already know, like to consume human blood. Some survival guides will tell you how they can be ground into a paste and fried, but I wouldn’t recommend consuming anything containing leeches. (15)

One of the main questions most people have about edible bugs is the following: what do bugs taste like?

Here is a very interesting list of some bug taste comparisons from the University of Nebraska’s Institute of Agriculture and Natural Resources: (16)

Many edible bugs can be consumed raw, but just about anyone who has eaten bugs or knows about eating bugs will recommend that you always cook your edible insects first. You can either boil, roast or smoke insects. In Oaxaca (Mexico) for example, grasshoppers are commonly cleaned and toasted in oil with garlic, lemon, and salt.

Cooking edible insects not only makes them safer to eat, it also makes them easier to digest and more appealing to most people’s taste buds. Removing any wings or legs before cooking is also a common bug cooking recommendation. It’s also a good idea to stick with edible insects that are still alive rather than ones that have already died. Freezing or cooking the little critters yourself is the best way for them to perish. (21)

You also have to be considerate of what the insects you’re about to consume recently ate themselves. You definitely don’t want any bugs that were recently munching on some insecticide-ridden plants because that means you’ll be consuming those toxins as well. Experts recommend collecting edible bugs in limited quantities “far away from civilization”. Nowadays, you may also find a source of commercially raised edible bugs. (22)

Beetles and other insects with hard outer shells typically contain parasites. Beetles still make it on the edible bugs list because experts say that they are safe to eat as long as you cook them first. (23)

I only recommend eating the edible insects listed in the Bible and I would only eat them cooked. If you are going to experiment with other bugs said to be edible, make sure that you are absolutely sure that they are safe to eat and also make sure you prepare them correctly.

You should never eat bugs that are brightly-colored because their coloring is almost always a warning that they are toxic. Never consume disease-carrying bugs like ticks, flies and mosquitoes. You should not eat hairy bugs because there may be stingers hiding in their fur. You should also avoid any insects that you know can bite or sting or that have a very strong odor. (17)

A few worms made the edible bugs list, but you may still be wondering about a very common worm. I’m talking about the earthworm. So can you eat earthworms? Sources say you can earthworms in an emergency situation, but to make sure you cook them well to cut down the risk of parasites. (18) I would highly recommend staying away from earthworms and worms in general. Scary personal stories, like a young man who consumed raw worms and ended up with a case of parasites that literally caused him to go speechless. (19) In another similar tale captured in the scientific journal Pediatrics, a 16 year old girl ended up with a serious parasite infection after eating just one earthworm on a dare. Her frightening symptoms included things like pulmonary nodules and serious blood system disturbances. (20)

If you or a loved one accidentally consumes an insect or has any negative reactions after intentional consumption, you should immediately call the 24 hour phone number for Poison Control in the United States: 1-800-222-1222. If you’re outside of the United States, contact your local or national poison control center.

Did you just find out a lot that you didn’t know about humans consuming edible bugs? I hope so! Am I recommending that you go to the nearest field, collect a bunch of crickets and roast them up for dinner tonight? No, but I did want to let you know the pluses and minuses when it comes to consuming edible bugs. I also wanted to let you know the insects that I would personally be willing to eat.

If you do choose to consume bugs, make sure to always know that the bug is in fact edible and make sure to cook it thoroughly. I know that many resources will tell you that you can eat raw bugs, but for the sake of your short and long-term health, you should always cook edible bugs well before consumption.

If the fat in your liver makes up 5 percent to 10 ...
Read More
Dr. Axe on Facebook 22 Dr. Axe on Twitter 0 Dr. Axe on Instagram Dr. Axe on Google Plus Dr. Axe on Youtube Dr. Axe on Pintrest 0 Share on Email Print Article 22

Have you ever noticed a feeling a brain fog and fatigue after ...
Read More
Dr. Axe on Facebook 202 Dr. Axe on Twitter 4 Dr. Axe on Instagram Dr. Axe on Google Plus Dr. Axe on Youtube Dr. Axe on Pintrest 534 Share on Email Print Article 740

A major topic in the field of obesity research is the link ...
Read More
Dr. Axe on Facebook 13 Dr. Axe on Twitter 22 Dr. Axe on Instagram Dr. Axe on Google Plus Dr. Axe on Youtube Dr. Axe on Pintrest 0 Share on Email Print Article 35

The dangers of artificial sweeteners are well-known, with research linking consumption to ...
Read More
View All