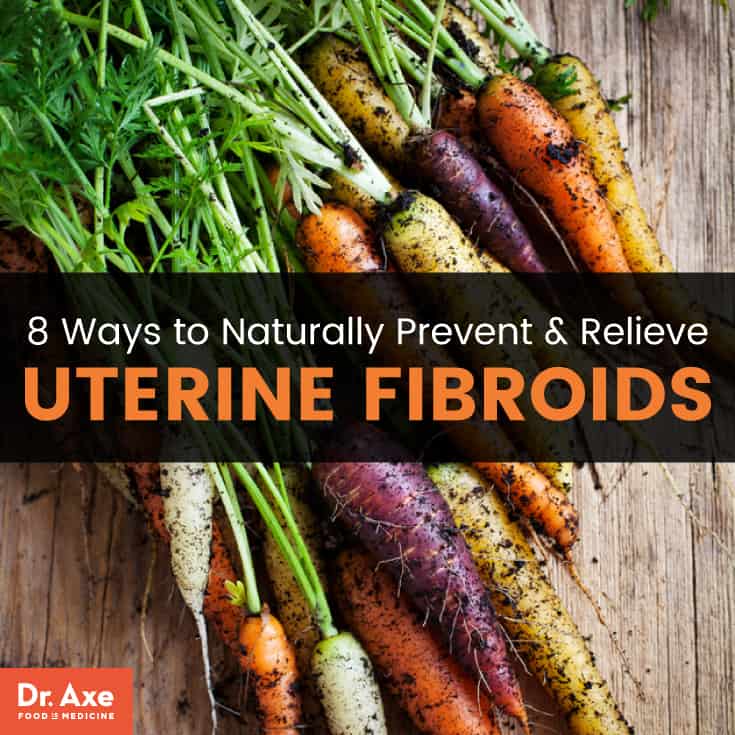 Uterine fibroids (also called uterine leiomyomas) are extremely common. In fact, about 75 percent of women experience them at some point in their lives. (1) Ranging in size from a few millimeters, or about the size of a pea, to the size of a grapefruit, fibroids are “the most frequent indication for major gynecologic surgery,” according to a report published in the New England Journal of Medicine. (2) Every year more than 200,000 hysterectomies are performed due to severe uterine fibroids.

What are fibroids? They’re non-cancerous tumors found within the uterine walls, often resulting in a change in the size or shape of the uterus as well as several unpleasant symptoms. Because they normally develop within the uterine wall, they are also called “uterine fibroids.” While some women deal with pain, menstrual changes and other complications due to having fibroids, they can also be symptomless. Because it isn’t always obvious if you have fibroids, it’s a great idea for all women to take steps to naturally prevent these common uterine growths.

Studies have shown that preventing or treating high blood pressure helps to lower the risk of developing fibroids. According to research from the Harvard Medical School and Harvard School of Public Health, there’s a strong and independent association between blood pressure and risk for fibroids in premenopausal women. (3)

Some risk factors for fibroids are out of your control, but there are many you can manage. These includes things like eating higher-quality meat (especially beef), adding more detoxifying foods such as leafy green vegetables into your diet, and drinking less alcohol. There are also a lot of steps you can take to help balance your hormones naturally, which is a key part of prevention and natural fibroid treatment. 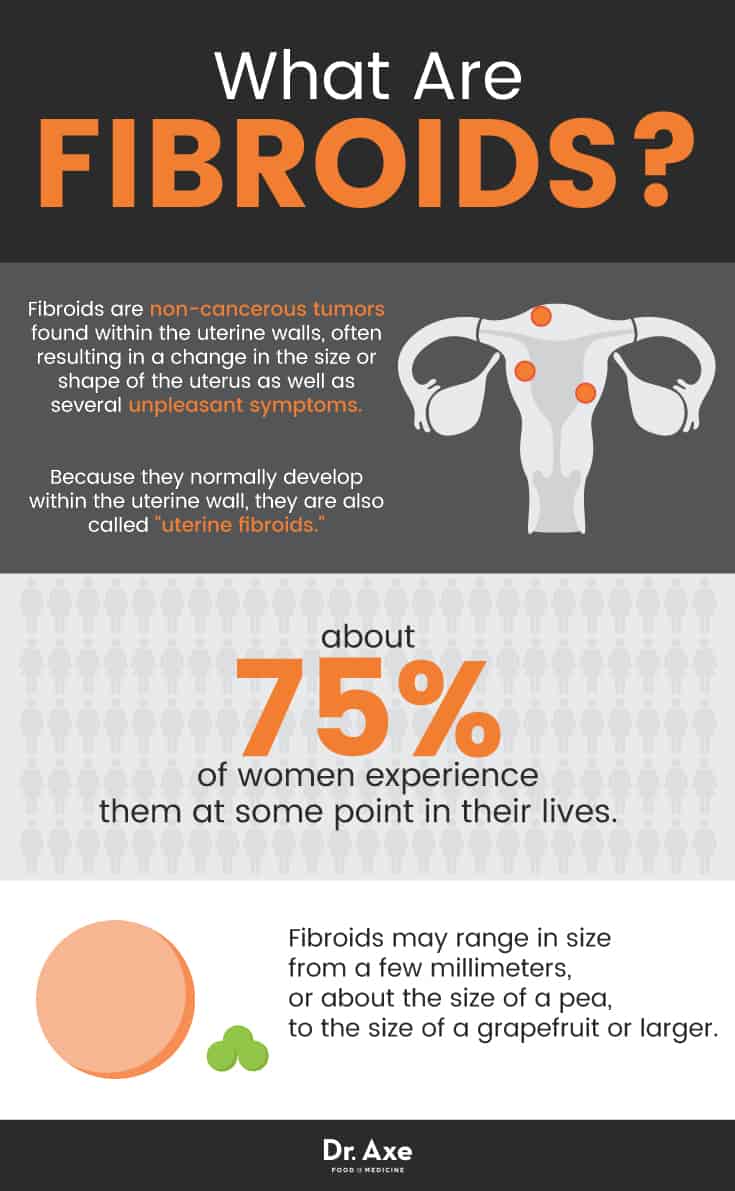 Foods to eliminate or limit in order to reduce your risk include:

What type of diet can help prevent or treat fibroids? The following foods should be included in your diet to keep them at bay:

Be sure to check with your doctor before introducing new supplements. Discuss if any of these supplements below, which have a strong reputation for creating better hormone balance, might be helpful for you:

Thyme, clary sage and frankincense are the best essential oils for natural fibroid treatment. They all have the ability to help balance hormones naturally. Clary sage oil has also been shown by researchers to significantly lower cortisol levels as well as to have antidepressant effects. This is just one of several studies that show clary sage oil’s ability to benefit a woman’s hormones. (6)

To use these essential oils you can rub 2 drops of each oil over your lower abdomen two times daily (combine with a carrier oil like coconut oil if you have sensitive skin). You might also try putting 2 drops of frankincense oil on the roof of your mouth two times daily.

By applying a castor oil pack to your abdomen, you increase circulation in the lymphatic and circulatory systems and also increase lymphocytes — white blood cells that eliminate disease-causing toxins from the body. Many holistic practitioners believe a buildup of toxins plays an important role in fibroid development.

Getting regular exercise can actually help to prevent fibroids before they start! According to one study, the more a woman exercises, the less likely she is to get uterine fibroids. (8) Exercise has many anti-inflammatory effects, may help control blood pressure, can help improve insulin sensitivity, is beneficial for weight management, and may contribute to hormonal balance.

Can fibroids cause bleeding, back pain or other unusual symptoms? It’s possible, but not every woman who has them experiences any noticeable symptoms at all. About 70 percent to 80 percent of women experience fibroids by the age of 50, but many will remain unaware that they have them. (9) It’s common for a woman to find out that she has them only during a routine exam or when she becomes pregnant and has ultrasounds performed.

When symptoms due to uterine fibroids do occur, here are some of the most common:

When a woman has fibroids during pregnancy, what are some signs to look for or symptoms that might occur? Sometimes fibroids can cause complications during pregnancy and labor, including leading to to a six-time greater risk of needing a cesarean section. (10) They may also contribute to infertility if they are severe. It may be harder for an egg to become fertilized and then implant on the lining of the uterus when a large fibroid is present.

A woman’s OB-GYN might recommend that she take medications prior to becoming pregnant in order to help shrink fibroids. In severe cases surgery might also be performed before pregnancy, but it cannot be performed once a woman is already pregnant because this can lead to blood loss and pre-term labor. It’s long been thought that fibroids increased the risk of miscarriage during the first and second trimester. However, a new meta-analysis showed no significant increase in spontaneous miscarriage risk among women with leiomyomas (fibroids) compared to those without.

It is possible that fibroids may increase risk for pre-term labor or complications during delivery including obstruction of the birth canal. However, not every woman with fibroids who becomes pregnant will experience any serious complications or symptoms.

Fibroids can increase in size during pregnancy due to increased levels of estrogen. Bleeding and abdominal pain might also occur during pregnancy if the fibroid begins to lose its blood supply. A woman’s doctor will likely recommend that she have more ultrasounds performed during pregnancy than normal in order to monitor her fibroids.

The medical term for fibroids is leiomyoma or myoma. The location, size and number of fibroids influences the severity of symptoms that a woman will experience. It is possible to have more than one type of fibroid at the same time if they develop in different parts of the reproductive system.

The main types of fibroids that can grow in a woman’s body include:

Intramural fibroids — Intramural fibroids are the most common type of fibroid. They grow within the muscular uterine wall. If they’re large enough, they can actually distort and stretch the uterus or womb. They can also cause prolonged, heavy periods along with pressure and pain in the pelvic region.

Subserosal fibroids — Fibroids that grow outside the walls of the uterus sometimes press on the bladder, causing urinary symptoms like difficulty emptying your bladder. This type may also sometimes cause backaches. Backaches may occur when subserosal fibroids bulge from the back of your uterus and press on your spinal nerves, causing pressure in your back.

Penducluated fibroids — These fibroids grow on small stalks inside or outside of the uterus.

Submucosal fibroids — These grow just underneath the uterine lining. This type of fibroid is more likely to cause heavy, prolonged menstrual bleeding. They can also sometimes cause problems for women trying to get pregnant. Submucosal tumors are not as common as other types.

Cervical fibroids — These grow in the cervical tissue, but they are rare compared to the other types of fibroids.

What are the root causes of fibroids? The following factors can raise a woman’s risk for developing fibroids:

Doctors aren’t exactly sure what causes fibroids, but research and clinical experience point to a few likely factors. (11) Fibroids seem to grow from a single smooth muscle cell but then continue expanding where they shouldn’t. Since fibroids run in families, they appear to be genetic to some extent. For example, identical twins are more likely to both have them than nonidentical twins. Many fibroids also contain changes in genes that are different from the genes in normal uterine muscle cells.

When Is Surgery for Uterine Fibroids Needed?

Fibroid surgery might be recommended for women with severe symptoms, those dealing with infertility, or those who are at an increased risk of dealing with complications during pregnancy or labor. Fibroid surgery is performed before a woman conceives (not during pregnancy), since it can lead to bleeding and other symptoms that would interfere with pregnancy. Uterine fibroid surgery can be performed to remove fibroids only (this is called a myomectomy) or to remove a woman’s entire uterus (called a hysterectomy). (12) A hysterectomy is only appropriate if a woman doesn’t plan to become pregnant in the future, since it completely removes her uterus.

Before surgery is performed a woman’s doctor will likely try less invasive treatment approaches, such as using birth control pills or hormone replacement drugs to control fibroid symptoms. Surgery is done through either a small incision using laparoscopy, through the vagina, or through a larger incision into the abdominal region. The treatment option called uterine fibroid embolization (UFE) is a minimally-invasive procedure that uses embolic agents to block the arteries that provide blood to the fibroids, causing them to shrink. UFE doesn’t work for every type of fibroid and may also contribute to poor outcomes following the surgery.

Recently an investigation involving 135,000 women was carried out to evaluate the outcomes of different approaches to treating fibroids. Women who were included in the investigation had undergone either hysterectomy, myomectomy, uterine artery embolization, or magnetic resonance-guided, focused ultrasound surgery. Results suggest that myomectomy is the preferred surgical approach to treating fibroids, although UAE is a “reasonable alternative” for some women who turn down other types of surgery.

Some clinicians have reported that that UAE should be avoided by women seeking to preserve fertility since it’s been correlated with low pregnancy rates and adverse events during or after pregnancy. In terms of preventing the need for hysterectomy, women who had myomectomies seemed to have a reduced risk for subsequent hysterectomy compared to those who had UAE. However, more women in the myomectomy group underwent at least one subsequent surgical procedure. After having a myomectomy, about 18 percent of women became pregnant compared with just 2 percent following UAE. Unfortunately, about 64 percent all women from both groups (myomectomy and UAE) were found to have a “high overall rate of adverse maternal and perinatal outcomes.”

Read Next: PMS Symptoms + The Best (and Worst) Period Foods