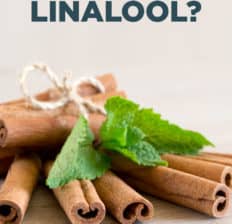 Linalool is a compound found in some natural remedies, including certain essential oils. Because it has sedative effects when inhaled, it’s been utilized in traditional medicine practices for many centuries, mostly to treat issues related to stress.

In fact, linalool is considered to be one of the oldest known sedatives, or sleep aids, in the world.

What is linalool used for today? Its floral aroma is believed to promote relaxation and have calming effects on the body and mind.

This means that linalool benefits include fighting anxiety, insomnia, muscle tension and inflammation.

Linalool is a terpene compound found in over 200 plant species. It gives certain plants a floral aroma along with a scent of spice.

It’s different than synthetic scents because it’s naturally found in flowers, spices and even cannabis. However, it can now be created in a laboratory, too. (More on avoiding synthetic scents, which can be irritating, can be found below.)

Most often it’s isolated from plants and added to creams, candles and other beauty products — plus it’s present in some essential oils.

Additionally, it’s a common flavoring agent in beverages and foods and has widespread use in cosmetics.

Is lavender a type of linalool?

Linalool terpine is found in plants including:

Lavender is one of the best and most popular plant sources of linalool, as are rosewood and neroli oil. In fact, linalool is responsible for much of lavender’s signature scent and soothing effects.

Research suggests that linalool has many health benefits and uses due to the way that terpenes modulate how certain parts of the brain work. It’s been shown that linalool can impact one’s mood, sleep, sensation of pain, cardiac rhythms, muscles and more.

Here’s more about what we know about linalool benefits:

Animal and human studies have demonstrated that linalool has sedative effects and can help calm an overactive nervous system.

The scent of linalool has been shown to act as a natural anxiolytic, meaning it decreases anxiety symptoms and perceptions of stress. It does this by activating the parasympatheic nervous system, which helps us “rest and digest.”

How can smelling something change how you feel so powerfully? Your sense of smell is directly linked to parts of your brain that control emotions and memory.

Olfactory (smell) receptors signal to the limbic and hypothalamic areas of the brain to release neurotransmitters, such as serotonin and endorphins, that link the nervous system to other body systems.

Because linalool is capable of reducing stress, it can lead to many health improvements, including:

2. Has Anti-Inflammatory and Pain-Dulling Effects

This terpene has been shown to modulate how the brain perceives pain, giving it the ability to decrease overactive responses to injuries or illnesses. It can help with inflammation, swelling (edema), redness, irritation and other contributors to pain.

One study even found that lavender aromatherapy can be used to reduce the demand for opioids during postoperative periods following surgery.

3. Can Help Boost Your Immune System

Plants containing linalool, including lavender, are known to help fight negative effects of stress and improve sleep quality — which are both important factors for supporting a healthy immune system.

Stress can impair immune function by altering production of white blood cells, increasing markers of inflammation and even affecting how some genes are expressed. Linalool’s anti-anxiety effects seem to help counteract the body’s stress response.

Linalool also seems to have certain antimicrobial properties, helping defend the body against infections. Furthermore, it has antioxidant properties and even possibly anti-cancer potential.

Is linalool safe for skin? It depends on how it’s used, but usually it’s beneficial for skin health because it fights inflammation and harmful bacteria.

For example, lavender oil can be applied to skin rashes to soothe redness, itching and other symptoms — plus it helps treat issues like razor bumps and razor burn, diaper rash, and so on.

Simply combine three drops of pure lavender oil with a half teaspoon of coconut oil, and apply it to the problem area three times per day for rash relief. Lavender oil can also be mixed with grapeseed or almond oil and gently massaged onto the skin.

5. Beneficial for Those With Epilepsy and Neurological Conditions

Linalool is sometimes used to help in the treatment of neurological diseases, including epilepsy (spontaneous seizures,), because of its anticonvulsant properties. Research suggests that this terpene can alter brain chemicals involved in excitability and muscle contractions, such as levels of glutamate and acetylcholine, potentially helping stop seizures and protect the brain from damage.

Recent studies also suggest that linalool may hold promise for helping those with Alzheimer’s disease by fighting cognitive impairments caused by inflammation, brain plaque and other cellular abnormalities. One animal study found that inhalation of linalool over a three-month period helped with memory, learning and spacial awareness among rats with neurodegenerative disorders.

The scent of linalool is known to deter mosquitos and act as a natural bug repellent. For example, lavender essential oil and peppermint oil can be used to repel bugs both indoors and outdoors.

Oils containing linalool can be diffused or applied to the skin if mixed with a carrier oil to help repel mosquitos and other insects, preventing bites and rashes.

Dosage and How to Use

Pure linalool is described as having a fresh, clean, mild, light floral odor with a slight citrus scent.

The most common ways to ingest linalool are through aromatherapy or inhalation of lavender essential oil. You can benefit from the aroma of lavender oil by:

The same goes with peppermint and cinnamon oils, which also contain terpenes. Use only several drops of essential oil on your skin at a time, mixed with a carrier oil.

Here are ideas for making DIY recipes that contain linalool and other beneficial compounds, such as terpenes and antioxidants:

Is linalool toxic to humans? Linalool is a “generally recognized as safe” substance approved by the U.S. Food and Drug Administration as a direct food additive (synthetic flavoring substance) for both human and animal consumption.

That said, it’s important to follow dosage guidelines when using oils or extracts that contain terpenes. If you’re allergic to lavender, rosewood, cinnamon or other related spices and plants, avoid any products made with linalool.

Remember that essential oils are extremely potent and should only be used in small amounts and according to label directions. They can be used aromatically and topically (per directions) for best results.

If you are taking medications or are pregnant, speak to your doctor about potential interactions before using essential oils.

How to Avoid Synthetic Linalool:

When linalool is made synthetically and added to beauty or household products, it will likely be mixed with other chemicals that can cause issues, such as nasal sensitivity, allergies and skin rashes. To avoid this, don’t buy products that lists fragrance, parfum, phthalates, DEP, DBP or DEHP as an ingredient.

When “linalool” is listed on a label, it’s likely a synthetic, man-made version, not the natural compounds part of a more complex organic essential oil.

Look for products that use organic essential oils when you are looking for a scent. Buying certified organic products also means they’re less likely to include artificial scents (but still read labels).