Cinnamon bark oil (Cinnamomum verum) is derived from the plant of the species name Laurus cinnamomum and belongs to the Lauraceae botanical family. Native to parts of South Asia, today cinnamon plants are grown across different nations throughout Asia and shipped around the world in the form of cinnamon essential oil or cinnamon spice. It’s believed that today over 100 varieties of cinnamon are grown worldwide, but two types are definitely the most popular: Ceylon cinnamon and Chinese cinnamon.

Browse through any essential oils guide, and you’ll notice some common names like cinnamon oil, orange oil, lemon essential oil and lavender oil. But what makes essential oils different than ground or whole herbs is their potency. Cinnamon oil is a highly concentrated source of beneficial antioxidants. (1)

Cinnamon has a very long, interesting background; in fact, many people consider it one of the longest-existing spices in human history. Cinnamon was highly valued by ancient Egyptians and has been used by Chinese and Ayurvedic medicine practitioners in Asia for thousands of years to help heal everything from depression to weight gain. Whether in extract, liquor, tea or herb form, cinnamon has provided people relief for centuries.

Throughout history, the cinnamon plant has been tied to protection and prosperity. It’s said to have been part of a mixture of oils used by grave-robbing bandits to protect themselves during the plague in the 15th century, and, traditionally, it’s also associated with the ability to attract wealth. In fact, if you were lucky enough to have cinnamon during ancient Egyptian times, you were considered a wealthy man; records show that the value of cinnamon might have been equivalent to gold!

The cinnamon plant is used in a few different ways to produce medicinally beneficial products. For example, you’re probably familiar with common cinnamon spice that’s sold in nearly every grocery store in the U.S. Cinnamon oil is a bit different because it’s a much more potent form of the plant that contains special compounds not found in the dried spice.

According to research, the list of cinnamon benefits is long. Cinnamon is known to possess antioxidant, anti-inflammatory, antimicrobial, anti-diabetic, and anticancer properties. It can also help to fend off heart disease, high cholesterol and neurological health disorders, like Alzheimer’s and Parkinson’s disease. (2)

Many of the benefits of cinnamon bark oil have to do with its ability to dilate blood vessels. Cinnamon bark can help enhance nitric oxide function, which causes increased blood flow and lower levels of inflammation. (4)

Some of the most researched health benefits of cinnamon oil include: 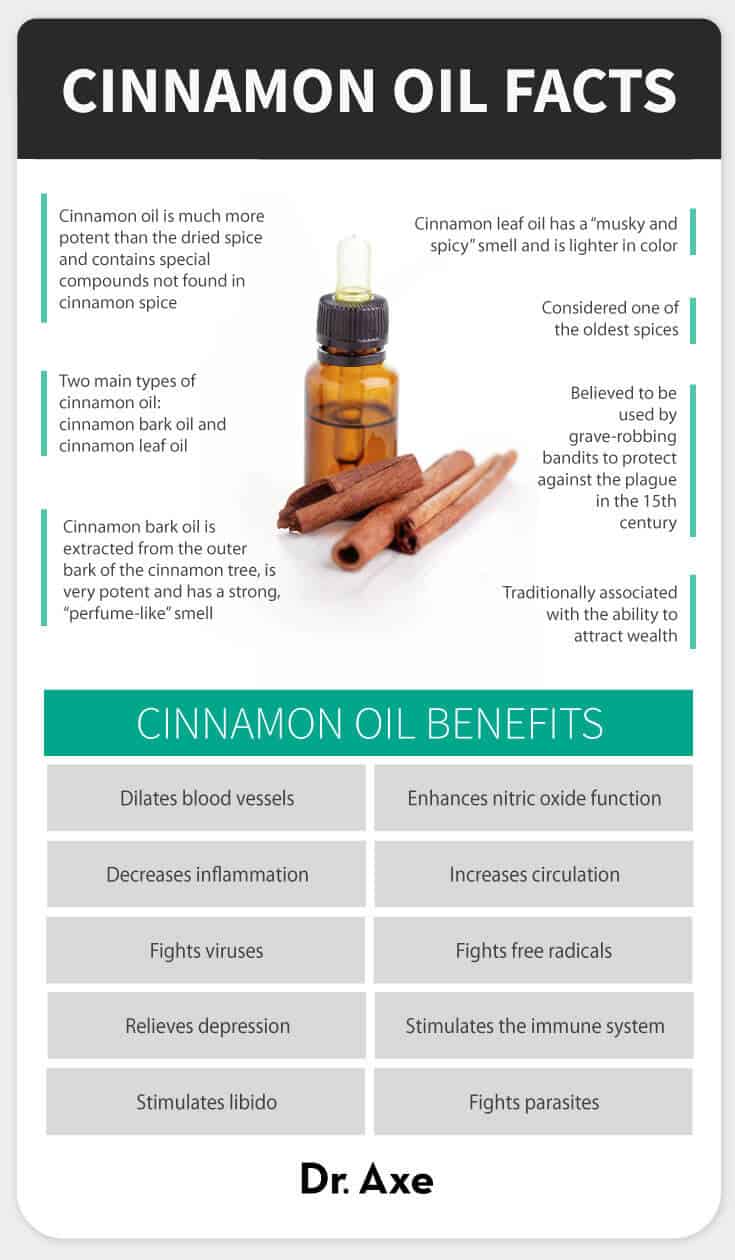 What is cinnamon essential oil used for? Here are some of the most popular ways cinnamon oil is used today:

Cinnamon has also been shown to help foster nitric oxide production, which is beneficial for people with heart disease or who have suffered from a heart attack or stroke. In addition, it contains anti-inflammatory and anti-platelet compounds that can further benefit arterial health of the heart. (6)

In Ayurvedic medicine, cinnamon is sometimes recommended for sexual dysfunction. Is there any validity to that recommendation? Animal research published in 2013 points towards cinnamon oil as a possible natural remedy for impotence. For the animal study subjects with age-induced sexual dysfunction, Cinnamomum cassia extract was shown to improve sexual function by effectively boosting both sexual motivation and erectile function. (7)

In both human and animal models, cinnamon has been shown to have positive effects on insulin release, which means it can help keep blood sugar stable and therefore prevent chronic fatigue, moodiness, sugar cravings and overeating.

In a study of 60 people with type 2 diabetes, three different amounts (one, three or six grams) of cinnamon supplementation taken for 40 days all resulted in lower blood glucose levels as well as lower levels of triglycerides, LDL cholesterol and total cholesterol. (8)

You can use a high grade, pure cinnamon oil in your food to reap its blood sugar benefits. Of course, don’t overdo it because you don’t want your blood sugar to be too low either. Inhaling cinnamon essential oil can also help to keep unhealthy food cravings away.

A study published in 2017 demonstrates how cinnamon bark essential oil can significantly stop the creation of several protein biomarkers that are involved in skin inflammation and tissue remodeling. (9) With it’s anti-inflammatory properties, cinnamon oil can be an effective natural remedy for inflammatory skin concerns like rashes and acne. You can mix cinnamon essential oil with a carrier oil (like coconut oil) and apply it to the skin to take advantage of its antimicrobial capacity.

Cinnamon oil can be a benefit for hair, too, with many beauty magazines recommending this spicy essential oil to boost hair health and growth. (10) You can combine a few drops of cinnamon oil with a carrier oil such as almond oil for a quick homemade scalp treatment.

Using warming cinnamon oil for lips is a natural way to plump them by boosting circulation to this area. Combine two drops of cinnamon oil with a tablespoon of coconut oil for a great DIY lip plumper.

5. May Help with Weight Loss

Cinnamon is gaining a reputation for being a fat-burning food and valuable tool for weight loss. With its ability to balance blood sugar levels and sweeten the taste of foods without any added sugar, it’s very helpful for curbing a sweet tooth.

A study published in the journal Metabolism demonstrates how cinnamaldehyde, a chemical compound found in cinnamon oil, may potentially help fat cells to burn energy. The study specifically shows how cinnamaldehyde activates thermogenic and metabolic responses in both animal and human fat cells, which can be beneficial to weight loss and obesity prevention. (11)

Unstable blood sugar can lead to overeating, low energy and weight gain, but adding cinnamon oil to fruit, tea, oats, baked goods or smoothies helps slow the rate at which glucose is released into the blood.

A type of bacteria called Helicobacter pylori or H. pylori is known to cause ulcers. When H. pylori is eradicated or reduced this can greatly help with ulcer symptoms. A controlled trial looked at the effects of taking 40 milligrams of a cinnamon extract twice daily for four weeks on 15 human patients known to be infected with H. pylori. While the cinnamon did not completely eradicate the H. pylori, it did reduce colonization of the bacteria to some extent and it was well-tolerated by patients. (12)

Research has also shown that a beneficial compound within cinnamon essential oil called eugenol may be one of the main reasons why cinnamon can help with ulcers. A study published in 2000 demonstrates how ethanol-induced gastric ulcers were “dose-dependently and significantly reduced by eugenol.” The eugenol decreased the number of ulcers as well as the severity of the ulcers. (13)

Studies have found that cinnamon oil inhibits growth of certain harmful parasites, making it an excellent parasite treatment. One study published in 2014 in the Iranian Journal of Parasitology evaluated the effects of cinnamon and ginger on giardiasis, an intestinal infection caused by a giardia (G. lamblia) parasite. The study reveals the effectiveness of both ginger and cinnamon extracts as “promising natural therapeutic agents against G. lamblia.” (14)

In vitro research also points towards cinnamon’s  inhibitory effect on Plasmodium falciparum, which is a parasite that causes malaria humans. Researchers have found that cinnamon can help fight parasites by disturbing their amino acid biosynthesis, which is essential to their survival. (15)

With its known anti-inflammatory, antimicrobial, antioxidant, and immunomodulatory effects, cinnamon essential oil is a great choice for fighting infections like a sore throat. (16) Try drinking a combination of hot lemon water, honey and cinnamon oil first thing in the morning to improve a sore throat and boost immune function.

These ingredients will work together to fight inflammation, reduce pain, and boost immune function making them a perfect sore throat remedy.

You know the warm smells of the holidays that everyone loves filling their homes with during the fall and winter months? You can make your own natural home deodorizer and freshener by combining therapeutic scents like cinnamon, orange, lemon and cloves in a diffuser or homemade room spray.

At the same time, you’ll experience a grounding, relaxing feeling and help detoxify the air.

Is cinnamon oil good for toenail fungus? According to research published in 2016, cinnamon oil and olive oil display antifungal and antimicrobial activity against fungal strains like Candida albicans, which is often the cause of toenail fungus and other fungal infections. (17)

For natural toenail fungus treatment, try combining a few drops of cinnamon essential oil with olive oil or coconut oil and applying it to the problem areas.

Here’s how you can use cinnamon oil at home:

You can also use cinnamon oil for cooking. Simply add a small amount (a few drops) of cinnamon oil to recipes, but avoid heating it to very high temperatures and cooking it for too long because that depletes its antioxidants and active ingredients. Cinnamon oil tastes like a very strong version of cinnamon spice so you can use the oil wherever you’d use ground cinnamon.

Try some of these simple recipes you can make at home using cinnamon oil:

Both honey and cinnamon benefit skin health by fighting infections, bacteria, inflammation, swelling and redness. Try this easy, homemade face wash, which is free of dyes, perfumes and chemicals.

Mix all ingredients together, and blend with a hand blender. Pour into a convenient bottle, and store in cool place. 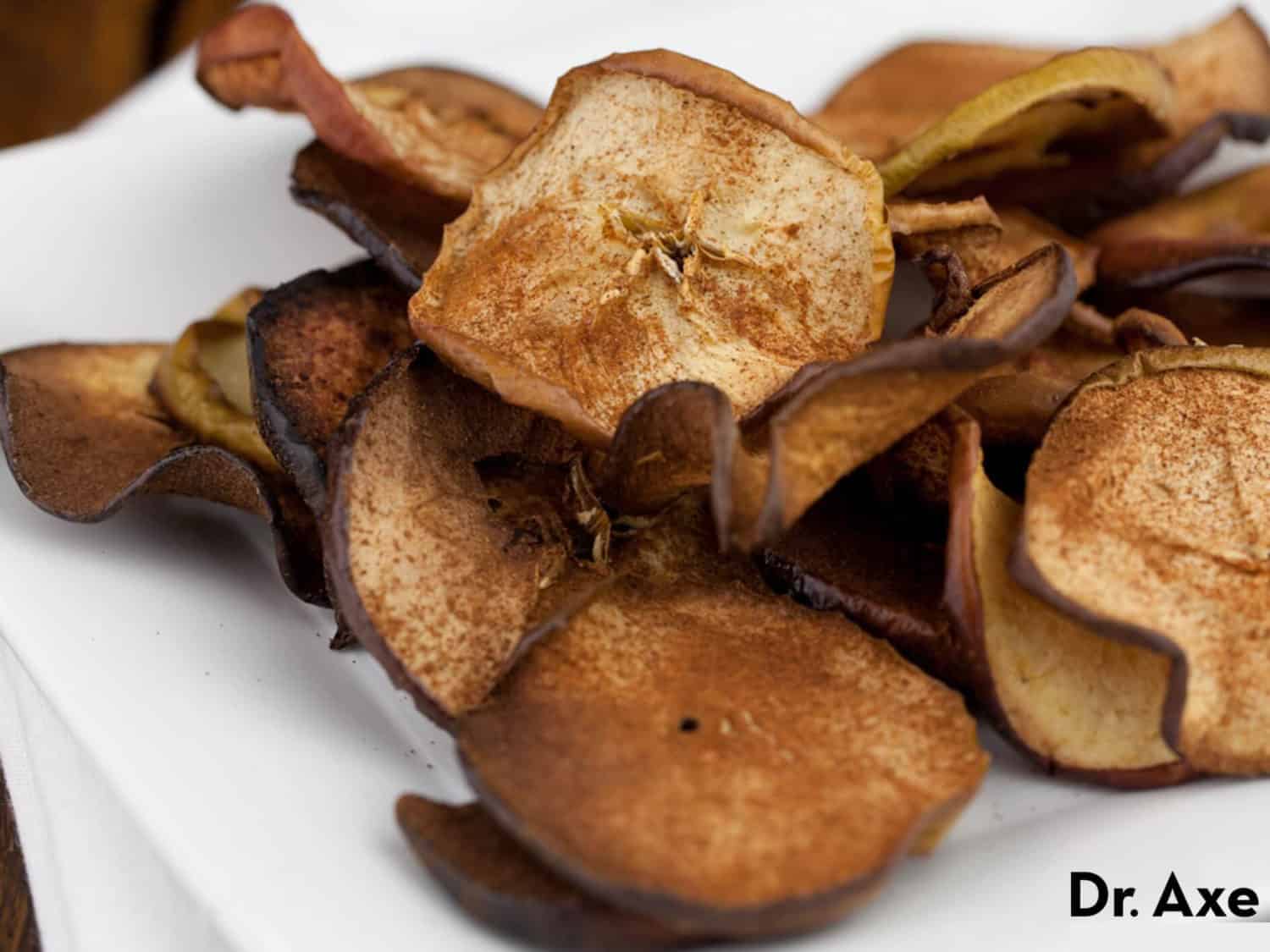 You can also try making:

Are there any potential cinnamon oil dangers? Cinnamon oil is generally considered safe, but there’s always the chance that some people might react to essential oils. It’s possible for sensitive people to experience allergic reactions when cinnamon oil is taken or applied topically. This might show up as skin irritation, such as itching and rashes spreading on the body.

It’s best to do a skin test on a small patch of skin when using a new essential oil to make sure allergies aren’t a problem. And if you ingest cinnamon oil and experience issues like nausea, stomach pain and diarrhea, stop taking it right away.

A small number of people have reported a burning sensation and pain when taking cinnamon oil, especially people who have ulcers in the mouth. And for anyone with a highly sensitive heartbeat and cardiovascular system, it’s possible for cinnamon to react with medications and cause dyspnea (difficulty breathing).

If you are currently pregnant, breastfeeding, taking medication, or being treated for a medical condition, speak with your health care provider before using cinnamon essential oil.

Ginger Oil: Top 10 Ginger Essential Benefits & How to Use It
1

Are you looking for an essential oil that will help to boost ...
Read More
View All