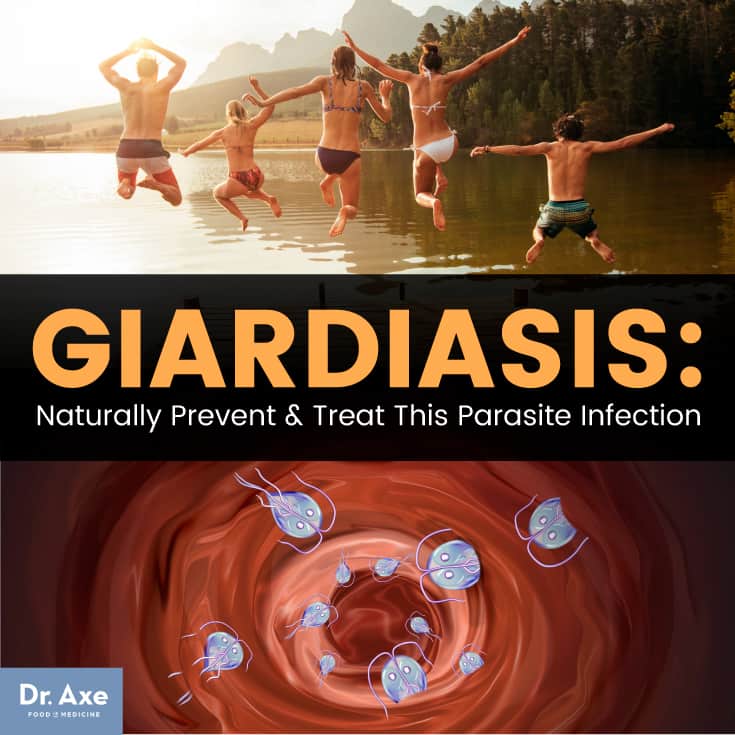 Are you and your family planning to spend time swimming at a lake this summer? Be sure you know how to protect yourself and your loved ones from a giardia infection — and that you can spot the symptoms. According to the staff at Mayo Clinic, giardia infection (also called giardiasis) is “one of the most common causes of waterborne disease in the United States.” (1)What are some signs that you may be suffering from a giardiasis infection? Several of the most common signs include diarrhea, stomach pains or cramps, nausea, bloating and loss of appetite. Sometimes the infection will resolve on its own without the need for medication or other treatments. But in those with weakened immune systems, or in children, the elderly or pregnant women, it’s not a good idea to wait and find out. Prevention tips and natural treatments that can help protect you from giardiasis complications include practicing good hygiene, boosting the strength of your immune system, or seeing a doctor for antibiotic treatments when needed.

Giardiasis is a condition caused by a parasitic intestinal infection, which results in uncomfortable symptoms that affect the digestive system. The microscopic parasite Giardia lamblia causes the infection. A parasite is an organism that lives on or in a host. It survives by getting its energy from the host. This includes absorbing some of the nutrients present in the host’s intestines. You can treat many cases of giardiasis with natural remedies and/or medications. However, prevention is still the very best line of defense.

Where and when is a giardia infection most likely to develop? People of all ages and ethnicities can develop parasitic infections because Giardia lamblia exists all over the world. You’re at the greatest risk for suffering from parasitic infections, including giardiasis, but also other similar types, when:

In many cases when someone acquires a giardia infection it will clear up on its own, typically within several weeks as the digestive system and immune systems remove the parasite from the body. However, in severe cases the body may not be able to control the infection. Therefore, complications or even long-term damage to the intestines can develop. It’s also possible to experience ongoing digestive symptoms even after the parasites are cleared from the body.

What Is Beaver Fever?

Another name for giardiasis is “beaver fever,” which is the same type of parasitic disease caused by Giardia lamblia. (2) Giardiasis earned this nickname because the beaver is believed to be a potential source of Giardia that contaminates lakes, reservoirs and streams. However, the beaver is not the only animal that can pass on the parasite to others. Authorities believe that human fecal waste (stool, or poop) often spreads the parasite in a number of different ways, as do other domestic and wild animals.

A high percentage of people with giardiasis never experience any noticeable symptoms. Because of this, many remain unaware that they even have the parasite in their system. For those who do deal with digestive discomfort or other giardiasis symptoms, they usually appear one to three weeks after exposure to the parasite. The most common signs and symptoms of a giardia infection include:

One of the most obvious signs of giardia infection is experiencing watery stools and diarrhea. This is why giardiasis (beaver fever) is called “a condition of the bowels.” Why does giardia cause diarrhea, usually along with other related digestive symptoms like bloating and cramping? The body’s way of defending itself is to try and remove the parasite through feces. Diarrhea can lead to dehydration (loss of water and electrolytes in the body), which can potentially make all symptoms worse, such as dizziness and nausea. It’s possible for some people to experience chronic diarrhea that lasts for more than several weeks. This can contribute to problems like nutrient deficiencies and unhealthy weight loss.

How long will these symptoms last? Most people need about 2–6 weeks to overcome the infection. This is why it can take this long for the immune and digestive systems to remove the parasite from the body and then return to normal. However, as mentioned above, symptoms such as diarrhea can last for longer — in some cases, up to several months.

How do you get a giardia infection, exactly? This type of microscopic parasite can survive inside both humans and animals by taking up residence in the intestine. Or it can even live outside the intestines for a period of time when a hard coating forms a shell around the parasite. This hard coating (called a cyst) protects the parasite. The parasite’s shell will dissolve when it makes its way into the “host’s” digestive system. Giardia parasites most commonly pass to new hosts when someone drinks water contaminated with the parasite. Or, they can pass on if someone eats foods that contain them.

Research shows that some of the greatest risk factors associated with developing giardia infection include:

Related: Foodborne Illness Symptoms, Causes + How to Treat and Prevent One

1. See Your Doctor If You Suspect An Infection (Especially If Pregnant)

In most cases, giardiasis will go away on its own. But if it doesn’t, a medical professional will need to treat it or you can treat it with home remedies. Your doctor can make a diagnosis of giardiasis by testing samples of your stool. It’s not always necessary to see a doctor (many people don’t since they show no symptoms). But if you suspect you or your child might have an infection, then visit your doctor for a proper medical diagnosis. This is especially important if you’re pregnant.

Symptoms caused by parasitic infections can mimic those due to other conditions. So when symptoms are moderate to severe, it’s best to speak with your doctor before attempting to treat the infection in order to rule out other causes. Always take severe cases that last for more than several weeks and interfere with normal eating, drinking and digestive health seriously. They should be treated as quickly as possible with treatments such as antibiotics (when needed).

When needed, several antibiotic medications used to treat giardiasis include: Metronidazole (Flagyl), Tinidazole (Tindamax) and Natazoxanide (Alinia). Potential side effects of these drugs can include nausea, a metallic taste in the mouth, flatulence, yellow eyes and brightly-colored yellow urine. They aren’t suitable for pregnant women and sometimes aren’t given to children. But ultimately your doctor will decide.

If you are spending time near or in bodies of water such as springs, streams, or lakes (for example while camping or hiking) don’t drink the water unless it is filtered and you’re sure it’s safe to consume. In general don’t drink from any natural body of water unless the water is filtered and/or you boil it for at least 10 minutes at 158 F (70 C) first. Do not make ice from the water. Avoid cooking with this water, and don’t wash fruits and vegetables with it.

Cooking food helps to kill the parasite, so eating raw fruits and vegetables is a bigger risk. It’s best to drink bottled water to be safe whenever you’re unsure about a water supply, especially for children and pregnant women. If you do swim in any potentially contaminated water, try very hard not to swallow water and shower soon afterwards.

If you have an increased risk for intestinal infections because you work with children who are in diapers (such as in a daycare center or camp), then be sure you wash your hands after you handle any fecal matter. The same is essential for anyone who cleans toilets, works with patients in a hospital or healthcare center, or handles stool/fecal matter in any other setting. Workers in restaurants or on farms should also be very careful about washing their hands so as to not transport any harmful microbes or parasites into the food supply.

3.  Protecting Those Around You

If you are diagnosed with giardiasis, always wash your hands before eating, shower daily and practice good hygiene in other ways.

Some people find that taking certain detoxifying herbs, antiparasitic essential oils and supplements helps cleanse their body of the parasite more easily. These include the following natural plant substances, which have been used safely for many years. You can find them in most health food stores or online:

Precautions & When to See A Doctor

There are a number of reasons you might develop symptoms such as loose stools, cramps, or bloating and nausea. This doesn’t necessarily mean that you have a parasite; however, if your symptoms persist for more than one to two weeks and are unexplained, see a healthcare provider. This is especially important if you recently traveled out of the country, swallowed water from a lake or stream, or you’ve been around an infected person.

While overcoming an infection or illness, prevent complications due to diarrhea or loss of appetite by drinking enough water to ensure you don’t become dehydrated. If your child is experiencing any of the symptoms described above that might be due to an intestinal infection, see a doctor or visit the ER right away to be safe.

Read Next: Why You Should Avoid Pork