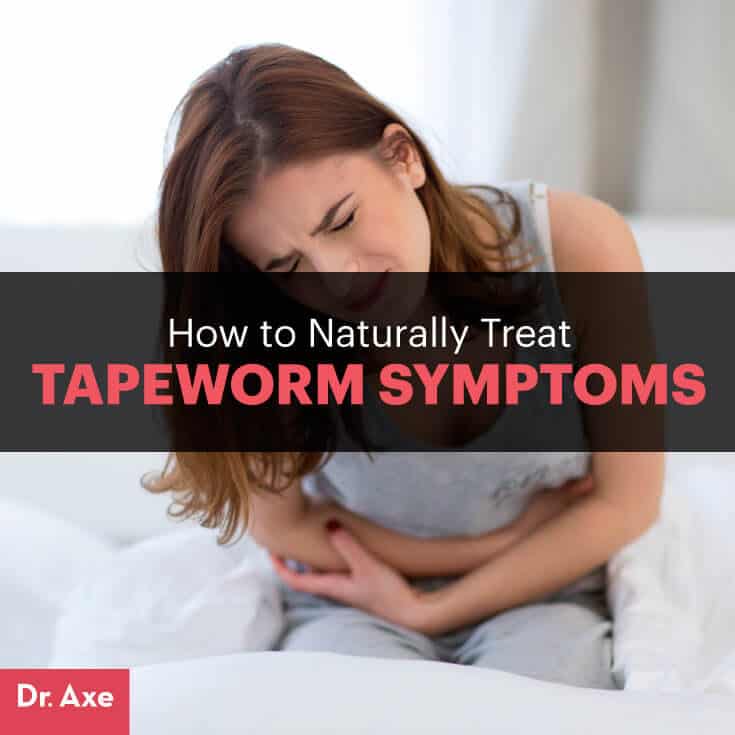 More than 100 million cases of tapeworm infections occur globally every year. (1) Tapeworm infections affect the intestines of humans and occur when people eat raw or undercooked, contaminated animal foods. They can even affect other organs in rare instances, including the brain.

Surprisingly, tapeworms don’t always cause any noticeable symptoms at all. However when they do, tapeworm symptoms — and those caused by other similar parasitic infections — can sometimes become very serious, even life-threatening. When present, tapeworm symptoms include nausea, diarrhea, cramps, trouble sleeping and more.

The actual infections that tapeworms cause mostly affect the intestinal wall, but can become more complicated when tapeworm larvae/eggs move through the bloodstream and attach to skeletal muscle or tissues, where they’re able to form cysts. One rare example of a complicated tapeworm infection was discovered in a man who complained of splitting headaches and migraine symptoms like nausea and vomiting for years; it turned out that he was suffering from a condition called neurocysticercosis, which causes neurological symptoms when tapeworm larval cysts develop in the brain.

What can you do to help overcome a tapeworm infection and relieve tapeworm symptoms? Natural treatments include performing a parasitic cleanse, consuming supplements to help improve detoxification, and enemas or colonics.

What Is a Tapeworm?

Tapeworms are flat, sometimes very long worms that are able to survive inside the digestive system of both humans and animals.

A parasite is an organism that lives on or in a host and gets its food from or at the expense of its host. A parasite’s eggs can even live inside raw meat, including beef, pork and fish.

Cysts that lead to tapeworms are what humans consume when they eat contaminated meat (especially pork) or fish. Eggs stored inside the cysts eventually hatch, and the newly born worms then continue the cycle by latching on to the host’s intestinal wall as an energy supply.

Six different species of tapeworms have now been identified that cause millions of human infections around the world every year — and the tapeworm symptoms that accompany them. (2)

Some of the most common types of tapeworm infections are caused by parasites, including beef tapeworms, pork tapeworms, fish tapeworms, dwarf tapeworms (Hymenolepis nana) and the Echinococcus species of tapeworms. Taenia saginata is the species found in beef, Taenia solium from pork and Diphyllobothrium latum from fish. Pork and fish tapeworms can sometimes grow up to 15—30 feet in length.

And because the worms can lay eggs inside of a human’s or animal’s digestive tract that make their way into stool, the eggs can sometimes spread to other people (refereed to as “intermediate hosts”) through contact with feces or from environmental runoff.

The most common tapeworm symptoms and signs include: (3)

Because eating raw or undercooked meat and fish is the most common cause of tapeworm infections, the best way to protect yourself is to cook these foods thoroughly before consuming them. Most experts recommend cooking animal foods to at least 135 degrees Fahrenheit (57 degrees Celsius). Cysts and eggs within meat or fish also commonly die off at this temperature or when frozen for extended periods (more than several days). Unfortunately, drying or smoking meat and fish usually is not enough to kill all eggs.

Because freshwater fish are capable of passing tapeworms to their eggs, it’s recommended that these fish never be served raw (sushi-style). Whenever consuming freshwater fish, make sure it’s cooked, ideally frozen after it’s caught or properly cured/brined. The very best way to prevent tapeworm infections from contaminated animal foods is also having a trained health code adviser check the meat or fish before it goes to market, since cysts within meat/fish are often visible to the naked eye.

A parasitic cleanse diet can help you overcome intestinal infection symptoms and prevent complications. Eating a healthy diet can also lower the odds of becoming infected with a parasite because it helps boost immunity and excludes certain risky foods (such as pork).

I recommend following the steps below for a parasite cleanse for about a week, at the same time consuming the anti-parasitic supplements listed below. After one week, keep consuming a healthy diet, but take a week off from the cleanse and supplements to help your body adjust. Then complete two more weeks of the cleanse plus supplements.

Here are the steps to take in order to complete a parasite cleanse:

Certain supplements can help kill parasites, as well as rid of the body of other toxins, including:

Performing two to three colon cleanses per week over the course of several weeks can help increase effectiveness of a parasite cleanse. Consider using a coffee enema or performing a salt water flush.

The most common reason that humans become infected with tapeworms is eating undercooked meat from an infected animal or contaminated freshwater fish. (4) Although exposure to a tapeworm needs to occur in order for an infection to take place, certain risk factors might contribute to worsened tapeworm symptoms. These risk factors include:

Here’s an overview of how a tapeworm parasitic infection develops:

If the tapeworm symptoms described above sound familiar to you, visit your doctor for a stool sample test and blood test. Stool samples can help identify the type of tapeworm that might be present, while blood tests indicate if an infection is causing complications by looking for signs of increased inflammation and high antibody levels.

Doctors also look for signs of a tapeworm infection using a stool sample by locating either segments of the worm itself or tiny eggs. If it’s suspected that larva have migrated out of the intestines and moved to another body part, your doctor might investigate whether or not cysts are present by performing a CT scan or MRI.

Once a tapeworm diagnoses has been made, doctors commonly use medications to help treat the infection. These can include:

Although it’s not very common, it’s possible for tapeworm symptoms to become very serious if a worm blocks someone’s intestines, causes deficiencies in key vitamins or minerals or causes larva to migrate out of the intestines and into other parts of the body where they form cysts.

Complications Due to Tapeworms:

How to Overcome Jealousy to Improve Overall Health

[Below is a transcript of my video on Thanksgiving health tips and ...
Read More
Dr. Axe on Facebook 18 Dr. Axe on Twitter 1 Dr. Axe on Instagram Dr. Axe on Google Plus Dr. Axe on Youtube Dr. Axe on Pintrest 4 Share on Email Print Article 23

More than a Diagnosis: Using Integrative Approaches for Living with Chronic Illness

As I sat among my peers during a college study group, I ...
Read More
Dr. Axe on Facebook 49 Dr. Axe on Twitter 8 Dr. Axe on Instagram Dr. Axe on Google Plus Dr. Axe on Youtube Dr. Axe on Pintrest 37 Share on Email Print Article 94

People living in India have relied on traditional Ayurvedic medicine practices to ...
Read More
View All