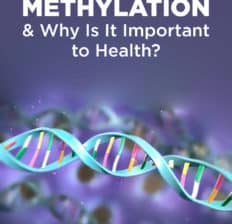 Although it may sound like a complicated process, methylation is the basis for life.

What does methylation do in the body? It helps embryos first develop and grow and then assists in gene expression, nutrient conversion and many other bodily processes.

Methylation supports functions of the cardiovascular, detoxification and neurological systems, just to name a few. You can see why it’s important to support normal methylation, including to prevent certain symptoms and diseases from developing.

Your body needs certain enzymes and nutrients, especially folate and B vitamins, to carry out the methylation cycle. Oxidative stress and inflammation are capable of interfering with the process. This means that a healthy diet and lifestyle are both key for optimizing methylation.

Methylation is a biochemical process in which methyl groups (CH3, or a single carbon atom and three hydrogen atoms) is transferred from one molecule to another. It happens many billions of times per day inside the body, helping power our cells and organs.

What does methylation do to DNA, and why does it mater? As a metabolic process, it basically switches genes on and off and repairs DNA.

This is a big deal, because gene expression has the power to influence many aspects of health, including one’s risk for certain diseases, such as neurological issues and some cancers.

Methylation and demethylation, which is the opposite process, basically work together to control different functions throughout the body.

Within the human body, methylation plays a role in:

Methylation also allows the body to make a number of other important molecules, including:

The methylation cycle is dependent on the active form of folate called 5-MTHF (also known as methylfolate). When we consume folate/folic acid from our diets, it’s converted to 5-MTHF.

In order for 5-MTHF to be created, you need to make enough of an enzyme called methylenetetrahydrofolate reductase (MTHFR).

Research suggests that a high percentage of people, up to 50% of Americans, may have a genetic mutation that prevents them from making enough MTHFR, and therefore not enough 5-MTHF is produced. This then interferes with the methylation cycle.

What type of symptoms can this problem cause? Each person with a MTHFR mutation or poor methylation seems to respond somewhat differently.

Some symptoms that might be experienced due to poor methylation include:

How is methylation tested?

A methylation panel is performed to uncover information about one’s biochemical methylation pathways. This type of test measures methylation metabolites in the blood and is useful for guiding patients suffering from poor methylation to know which types of supplements may be helpful.

A genetic test can also be done to determine if you have the MTHFR mutation, which will indicate that your body is struggling with the methylation cycle. Those with MTHFR mutations usually need to be extra careful to live healthy lifestyles and consume extra nutrients that serve as methyl donors.

How do you increase methylation? Whether or not you have the MTHFR mutation, the lifestyle habits below can help support normal methylation:

Emphasize whole, unprocessed foods in your diet, especially those that provide natural folate and B vitamins (including B6 and B12), which are methyl donors and critical components of normal methylation.

Folate from food sources is especially important because the body has a harder time absorbing synthetic folic acid. Magnesium, zinc and protein (which is high in glutathione precursors) can also help support methylation.

Some of the best foods for assisting the methylation cycle include:

You’ll also want to limit or avoid inflammatory foods, such as those with:

2. Supplement to Meet Your Nutritional Needs

In addition to a healthy diet, high-quality supplements can help provide your body with the nutrients it needs to perform methylation. Look for either a multivitamin or other supplements that provide at least 100% of your daily needs for:

High levels of stress can make MTHFR mutation symptoms even worse and hinder the overall methylation process. Getting enough of both exercise and sleep is important for fighting free radicals, keeping inflammation under control and promoting detoxification.

Aim for 30+ minutes of exercise per day if possible, and prioritize sleep by getting between seven to nine hours per night.

4. Avoid Smoking, Too Much Alcohol and Certain Drugs

Alcohol, cigarettes and other drugs all take a toll on your liver, which is responsible for cleaning your body of these substances. When liver function suffers, due to damage and inflammation, methylation is disrupted.

Some prescription and over-the-counter medications can further deplete already low folate levels or interfere with methylation. Speak with your doctor if you take any of the following drugs and you suspect you have an issue related to methylation: