In the U.S. alone more than 66,000 new cases of NHL are diagnosed every year, and this number only keeps rising. Non-Hodgkin’s lymphoma is much more common than the other primary type of lymphoma, Hodgkin’s lymphoma.

People who are most likely to develop non-Hodgkin’s lymphoma are older/elderly people and those with low-functioning immune systems, due to having other illnesses or even taking certain medications. Fortunately, many people with non-Hodgkin’s lymphoma survive the disease and go on to live many years. But lymphoma can make it hard to keep up with work, school, family obligations, hobbies or other day-to-day activities. A healthy lifestyle — including eating a nutrient-dense diet, getting enough sleep and exercising — can all help prevent non-Hodgkin’s lymphoma and also manage symptoms.

What Is Non-Hodgkin’s Lymphoma?

Lymphomas are cancers of the lymphocytes, which are white blood cells made by the immune system (specifically the lymphatic system) that are stored in lymph nodes and blood-forming organs. Lymphocytes normally help to fight off infections and produce antibodies, so they are very important for supporting the immune system’s defense mechanisms. They travel throughout the whole body via the blood and lymphatic vessels, essentially always “on patrol” for invaders that might cause illnesses or infections.

Non-Hodgkin’s lymphoma is the term for a group of cancers that develop in B or T lymphocytes. The majority of NHL cases are caused by abnormalities of B lymphocytes (an estimated 80–85 percent), with only about 15–20 percent of cases being due to T cell abnormalities. Is NHL a type of blood cancer? Yes, most doctors consider lymphoma to be a form of blood cancer. According to the American Society of Hematology, “About half of the blood cancers that occur each year are lymphomas, or cancers of the lymphatic system.” (2) One of the first signs of non-Hodgkin’s lymphoma is rapid swelling and enlargement of the lymph nodes. NHL can be contained to only one lymph node or potentially spread to other lymph nodes throughout the body.

Other Types of Lymphoma:

All types of lymphoma have this in common: They are caused by abnormalities of the lymphatic system (or lymph system), which is part of the immune system and responsible for protecting the body from pathogens like germs or viruses that can cause infections and some other illnesses. The lymphatic system has many roles, including helping to move waste and excess fluids from the body and helping to clean the blood.

Lymph nodes are found all around the body, with the most prominent locations being the throat, groin, armpits, chest and abdomen. They collect lymphocytes and are scattered throughout the network of lymphatic vessels. Inside the lymph nodes important immune cells — white blood cells, or lymphocytes — are created, which are critical for fighting infections and healing wounds.

Signs and Symptoms of Non-Hodgkin’s Lymphoma

Symptoms of non-Hodgkin’s lymphoma are due to the many changes that take place in the body when the lymph nodes become swollen and stop working properly. Certain symptoms are due to the infiltration of lymphoma cells into the bone marrow, blood, intestines, skin, brain and spinal cord. Red blood cells can also become destroyed, leading to symptoms of anemia. Bleeding and swelling can occur in the digestive tract, leading to many digestive changes and difficulty properly absorbing nutrients. Antibody production can be halted, increasing susceptibility to other diseases and bone marrow can also become destroyed.

Some of the most common non-Hodgkin’s lymphoma symptoms include:

It’s not exactly known what causes each subtype of non-Hodgkin’s lymphoma, although experts believe that viruses play a role in the development of certain rarer types. For most patients with lymphoma a clear cause for their disease will not be found; however, certain people have a higher risk for developing lymphoma than others.

Risk factors for non-Hodgkin’s lymphoma include: (7) 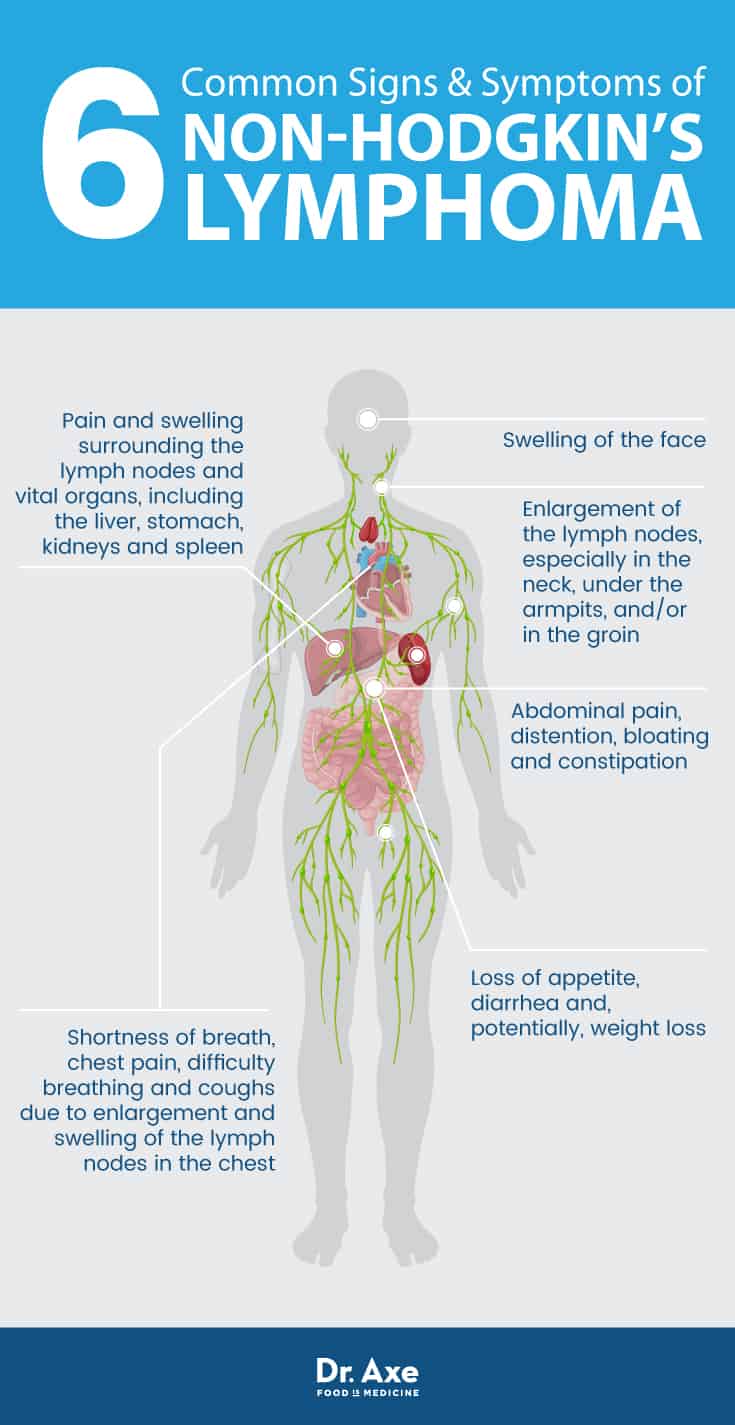 As described above, the underlying cause of non-Hodgkin’s lymphoma is abnormal lymphocytes. There are two main types of lymphocytes (white blood cells): B cells and T cells. B cells normally help protect the body against germs (bacteria or viruses) by making proteins called antibodies, while T cells destroy germs or abnormal cells and help control activity of other immune system cells. Non-Hodgkin B-cell lymphomas are much more common than T-cell lymphomas.

Treatments for NHL will depend on how severe the patient’s disease is, plus what specific type of lymphoma they have. Patients with NHL are usually treated by a team of medical professionals including: (8)

Non-Hodgkin’s lymphomas can either be more or less proliferative depending on how severe the disease is. Each individual case of NHL will depend on how mature the cells are when they become cancerous; how much the cancer spreads; how healthy the patient is otherwise; the patient’s age and their family and medical history.

Doctors split different types of NHLs into different grades: low grade, intermediate grade, or high grade lymphoma. Lymphomas are also classified as either “indolent lymphomas,” which spread slowly and don’t always require treatment right away, or “aggressive lymphomas,” which spread rapidly and need to be treated immediately to control the disease.

Conventional treatments for non-Hodgkin’s lymphoma typically one or more of these treatment approaches:

Diffuse large B-cell lymphomas (or DLBCL) typically progress quickly and therefore are usually treated with chemotherapy and three to six cycles of drugs known as CHOPs (cyclophosphamide, doxorubicin, vincristine, and prednisone), plus rituximab (Rituxan). Chemo injections and radiation may also need to be used in more severe cases. Follicular lymphoma, which spreads slowly but can return and be hard to treat, is usually treated with radiation therapy and sometimes Rituxan and/or chemotherapy.

1. Limit Your Risk for Infections and Viruses

Not every type of cancer or lymphoma may be preventable, but you can do your part to lower your risk as much as possible. The World Cancer Research Fund estimates that about 20 percent of all cancers diagnosed in the U.S. are related to preventable lifestyle risk factors, including: amount of body fat, physical inactivity, excess alcohol consumption, and/or poor nutrition. (9) Other preventable factors also come into play, such as exposure to chemicals and medication use. It’s estimated that only about 5–10 percent of all cancers are inherited (passed from one blood relative to another), which means you do have a lot of control over your health. (10)

A good deal of evidence shows that you can decrease your risk for many types of cancers — including lymphomas — by making healthy dietary choices; exercising and staying active; reducing carcinogen/toxin exposure; and not smoking or using drugs. All of these lifestyle habits have a big impact on your immune system and ability to fight off illnesses including cancer.

Purchase organic foods as much as possible in order to limit your exposure to pesticides and insecticides. Recently, concerns have grown over the use of chemical weed killers (such as Roundup, produced by Monsanto), especially those containing the active ingredient glyphosate. According to the World Health Organization (WHO), glyphosate is probably carcinogenic to humans and may contribute to an increased cancer risk. Experts believe that pesticides/insecticides may cause changes to cells’ DNA and impact the immune system in other ways. If you work on a farm or in agriculture, then it’s worth doing your research and talking to your doctor about your risk for related problems.

Quit smoking and using tobacco if you currently do, perhaps by getting support from a treatment group or behavioral therapist.

Talk to your doctor about medications you take regularly and whether these might increase your risk for certain diseases.

Also, some sun exposure can be beneficial (such as for preventing vitamin D deficiency), but too much can cause dangerous changes to cells.

Some tips to help you manage symptoms like constipation, swelling and pain associated with NHL include:

Treatment for non-Hodgkin’s lymphoma isn’t always necessary, but this doesn’t mean that you should delay visiting a doctor for help. When it comes to cancer, always get help from a professional and consider getting a second opinion regarding your treatment options. If you have a family history of lymphoma or are in a high-risk group, then be sure to stay current on routine doctor’s visits and tests. If you feel overwhelmed by your diagnosis, consider speaking with a therapist to manage stress, or joining a support group.

Read Next: How to Boost Your Immune System: Top 10 Boosters

It’s no secret that as we age we slow down both physically ...
Read More
Dr. Axe on Facebook 2088 Dr. Axe on Twitter 18 Dr. Axe on Instagram Dr. Axe on Google Plus Dr. Axe on Youtube Dr. Axe on Pintrest 128 Share on Email Print Article 2.2K