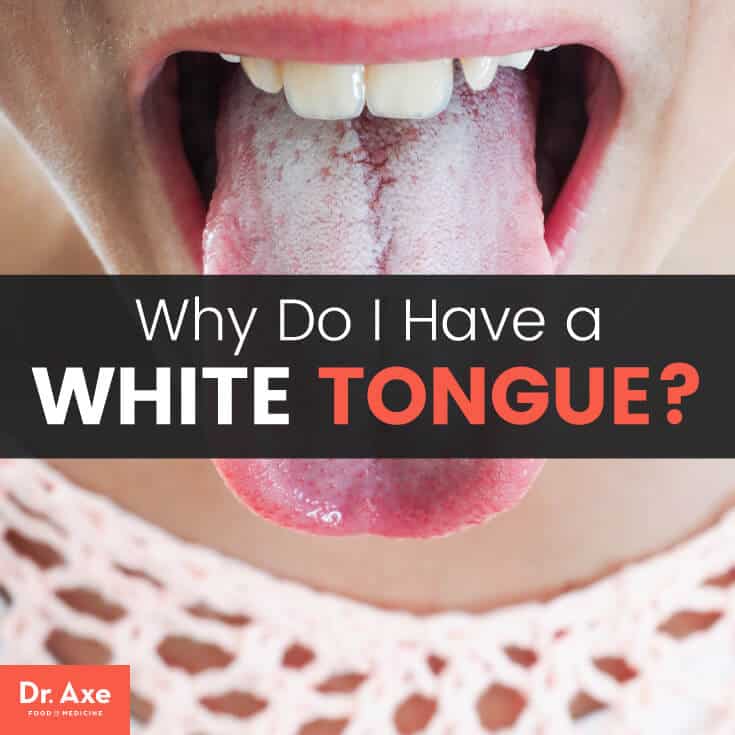 Did you know that the tongue is one of the strongest muscles in the body? It’s actually the most sensitive place for our sense of touch, and it allows us to talk, taste food and swallow. Plus, according to the principles of traditional Chinese medicine, the tongue plays an important role in determining and treatment health conditions. For that reason, white tongue can be viewed as a warning sign of a possible health issue, like oral thrush or poor oral hygiene.

There are simple, natural remedies that get rid of white tongue, get rid of bad breath and boost your oral health.

A healthy tongue is pink and covered with papillae, small nodules that are on the surface of the tongue and have a rough texture. When your tongue appears white, that means food debris, bacteria and dead cells have been lodged between inflamed papillae. (1) White tongue is usually harmless and only temporary, but it can also be an indication of an infection or some serious conditions.

White tongue may be caused by the following factors:

The most common cause of white tongue is dehydration or dry mouth, which is a breeding ground for bacteria. In fact, if you don’t diligently brush your tongue and teeth at least twice a day, you increase your risk of developing white tongue.

White tongue is often due to an overgrowth of candida, a fungus that causes yeast infections or oral thrush. It’s actually perfectly normal for the fungus candida to live in your mouth, but when it accumulates, it can spread to the roof of the mouth, gums, tongue, tonsils and back of the throat — creating white tongue, white lesions, redness and even bleeding. (2) Aside from white tongue, other candida symptoms include chronic fatigue, skin and nail fungal infections, and brain fog.

Sometimes, white tongue that cannot be scraped off and doesn’t go away after using antifungal treatments is the result of a more serious condition. A white tongue and sore throat may be symptoms of strep throat. White tongue may also be due to bacterial infections, such as syphilis or periodontal disease, or a chronic autoimmune disorder called oral lichen planus. HIV/AIDs, leukoplakia (when cells in the mouth grow excessively) and geographic tongue (reddish spots on the tongue with a white boarder) are other conditions that may cause white tongue or white patches on the tongue. These conditions require medical attention.

Tongue coating is one of the most important foundations of tongue diagnosis in traditional Chinese medicine. It plays an important role in determining and treating health issues. According to the principles of traditional Chinese medicine, the tongue coating is formed by the evaporation of stomach qi (which means “vital energy”), and it’s closely related to the conditions of body organs, body fluid and blood. It’s believed that changes of tongue coating can’t be separated from the inner environment of the body. (3)

Research published in BMC Complementary and Alternative Medicine suggests that tongue coating is caused by processes of the spleen and stomach, and the tongue coating changes rapidly and obviously in the development of chronic gastritis, or inflammation of the stomach. (4)

When considering the views of Chinese medicine, it’s clear that a thick white coating reveals a lot about a person’s digestive and overall health. A thick white coating on the back or at the center of the tongue may be a sign of an overloaded digestive system. This can be caused by an imbalance of good bacteria in the gut, nutritional deficiencies and stress.

Whether or not your white tongue is a sign of a serious health concern, it’s pointing out that something isn’t right. That’s why you should work to naturally treat the issue by re-establishing the good bacteria in your gut, ridding the mouth of bacteria and avoiding the growth of candida with the following at-home white tongue remedies.

How to Get Rid of White Tongue: 10 Natural Treatments

Several studies have suggested that probiotics can be beneficial for oral health purposes because they inhibit the adhesion of unwanted microbes. Probiotic bacteria seem to affect both oral microbiota and immune responses, so they can help prevent tongue inflammation and the growth of bacteria on the tongue. (5)

One of the many baking soda uses is its ability to exfoliate the tongue, removing any residue that causes white tongue, and maintain good pH levels in mouth by neutralizing acids.

Plus, research shows that baking soda, or sodium bicarbonate, possesses substantial inhibitory activity against Streptococcus mutans in saliva and plaque. Exposure to baking soda caused statistically significant decreases in the number of bacterial cells in the mouth in research conducted by the Dows Institute for Dental Research at the University of Iowa’s College of Dentistry. (6) Simply mix a teaspoon of baking soda with lemon juice until it creates a paste. Then add the mixture to your toothbrush, and brush your tongue and mouth.

Coconut oil pulling is one of the best ways to remove bacteria from the mouth. This oral detoxification is commonly used in Ayurvedic medicine. Ayurveda advises oil pulling to purify the entire system, as it holds that each section of the tongue is connected to different organs of the body. The oil sucks the debris and toxins out of your mouth and creates a clean, antiseptic oral environment.

Research shows that oil pulling can be used as an effective remedy in maintaining and improving oral health. It has shown to be just as effective as mouthwash at improving bad breath and reducing the microorganisms that may cause the buildup of bacteria in the mouth and white tongue. (7, 8)

Although you can use olive or sesame oil here, coconut oil benefits are superior, and that’s why it’s recommended for oil pulling. Coconut oil is highly absorbable, and it has the power to kill candida. Oil pulling is simply done by swishing a tablespoon of coconut oil in your mouth for 10–20 minutes. Then spit the oil out in the trash, rinse your mouth with warm water and brush your teeth as normal.

There are many benefits of sea salt, including its natural antibacterial activities, so by gargling and swishing sea salt with water, you can eliminate bacteria and debris that causes white tongue. Plus, the coarse texture of sea salt works as an exfoliant, helping remove the white coating on the tongue. (9)

Unlike table salt, seat salt undergoes very little processing, leaving behind healthful trace minerals and elements that help to ensure proper fluid balance in your body’s cells. Start by combining sea salt and water to create a mouthwash. After using the mouthwash, brush your teeth and tongue with the sea salt.

Aloe vera has antibacterial, antifungal and anti-inflammatory properties, which is why it’s used to heal infections, wounds, burns and skin irritations. It also contains enzymes that help to remove dead cells and promote the regeneration of skin tissue. (10) To remove the white coating on your tongue, swish one tablespoon of aloe vera juice in your mouth two to three times a day until the coating has disappeared.

Colloidal silver is known for its antibacterial and antifungal properties, which is why it’s used for prompt action against irritating and highly infectious viruses and bacteria, like pink eye, herpes, shingles and HIV/AIDS.

Another colloidal silver benefit is it reduces inflammation and boots cell recovery. To get rid of white tongue, simply swish a tablespoon of colloidal silver with equal parts water in your mouth for five minutes, twice daily.

Garlic’s antifungal activity makes it an effective natural treatment for white tongue. Research shows that allicin, one of the active compounds in garlic, demonstrates anticandidal effects and may be just as effective as fluconazole, a drug that’s used to treat fungal infections, including yeast infections of the mouth. (12)

To treat white tongue, especially when it’s the result of oral thrush or bacterial overgrowth, take one clove of raw garlic per day or use an organic raw garlic supplement.

Oregano oil has antiviral, antibacterial, antifungal, antiparasitic, antioxidant and anti-inflammatory properties. It serves as a natural antibiotic, so you can avoid white tongue that’s caused by conventional antibiotic drugs. A 2010 study published in the Brazilian Journal of Microbiology notes that oregano oil has powerful antifungal activity against candida and may represent an alternative treatment for oral thrush, a major cause of white tongue. (13)

Pau d’arco tea has antifungal and anti-inflammatory properties, and it can kill candida overgrowth in the mouth naturally. (14) To treat oral thrush or white tongue caused by fungal overgrowth, try making your own pau d’arco tea at home. Put two cups of bark into four cups of boiling water and let it sit for 20 minutes. Then remove the heat and let it cool for at least an hour. Strain the water and drink small portions throughout the day.

One of the most important things you can do to prevent and treat white tongue is maintain proper oral hygiene. Make sure to brush your teeth and gums at least twice each day, including after meals.

You can also try tongue scraping, which is another practice of Ayurvedic medicine that can remove bacteria, debris and dead skin cells from the tongue. Tongue scraping helps get rid of white tongue and improves the smell of your breath too. In fact, a study published in the Journal of Periodontology found that a tongue scraper performed better than a toothbrush in reducing the production of volatile sulfur compounds that cause bad breath and other oral hygiene issues. (15)

White Tongue vs. Bumps on Tongue

Sometimes your tongue may feel sore or have painful bumps. This can be due to accidentally biting your tongue or burning it when you eat something that’s too hot. It can also be caused by food allergies, a bacterial infection, a canker sore or a cold sore. If you smoke, that can irritate your tongue and cause it to feel sore or discolored. (16)

Small bumps on the tongue are usually harmless and only temporary. One bump on only one side of the tongue may be more serious and should be looked at by your dentist, especially if it’s painful.

If your white tongue doesn’t disappear within a few days of trying these natural treatments, speak to your health care provider about possible causes. White tongue is a symptom of a health condition. In most cases, it’s harmless and can be treated with oral hygiene and natural remedies, but sometimes it’s caused by a more serious condition that must be addressed by a professional.