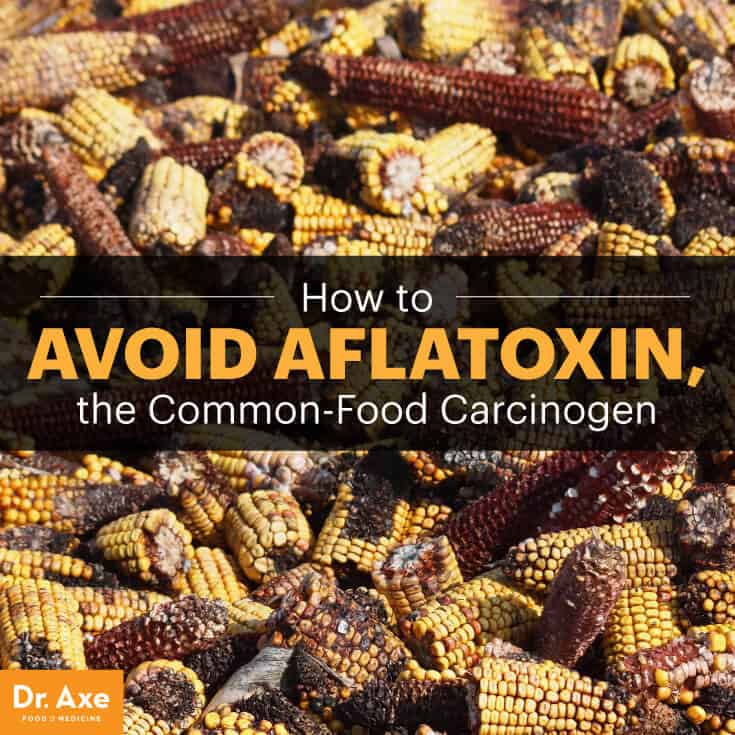 Aflatoxin is a type of mold that is considered a human carcinogen. It’s found in certain commonly eaten foods including peanuts, peanut butter and corn, and is most harmful in parts of the world where people consume large amount of these foods, such as Asia and Africa.  The species of molds that combine to form aflatoxin grow in soils when conditions are just right, including when decaying food, plants, hay and grains are piled together to decompose in areas with high moisture and high temperatures. (1)

There are actually at least 13 different types of naturally-occurring aflatoxin toxic molds that researchers have been able to identify. Of the 13 species, the type called aflatoxin B1 is considered the most toxic, capable of causing health problems such as liver disease or cancer, autoimmune responses, digestive issues and in rare cases even death. (2)

Research has shown that consuming aflatoxin through the food supply is one of the major causes of liver disease (specifically the type called hepatocellular carcinoma) in certain countries such as China and Africa.

What can you do to avoid aflatoxin and lower the risk for symptoms it can cause (such as allergies and fatigue)? Aflatoxin enters the body through certain widely-available foods, especially grains and legumes, so making changes to your diet is the first step. Secondly, certain supplements can also help the body detoxify itself of aflatoxin and raise immunity against its effects.

Chemically speaking, aflatoxin is a type of “mycotoxin” which is produced by two different species of mold: Aspergillus flavus and Aspergillus parasiticus. There are natural molds found around the world and concentrated most in the human food supply in areas with wet and warm climates. It’s also possible for aflatoxin mold to form in grains grown under poor conditions, such as those experiencing droughts.

The strains of aflatoxin most common in foods include B1, B2, G1 and G2.  After humans or other mammals consume aflatoxin metabolic processes turn then into metabolites M1 and M2 which have ” high carcinogenic potential.” International Agency for Research on Cancer has classified aflatoxin B1 as a “Group I carcinogen” that’s capable of raising the risk for cancer. (3)

Aflatoxin seems to affect the ways that cells reproduce and also targets the liver, affecting the way that other substances are metabolized and eliminated, and possibly increasing food allergy reactions.

There are many different types of molds and fungus that can grow in food, including various species of mycotoxins, but aflatoxin has gained attention more than most others because studies have found clear evidence of its potential for causing carcinogenic effects. In animal studies, high levels of aflatoxin consumption has been shown to be poisonous, and in human observation studies aflatoxin consumption correlates with an increased the risk for certain illnesses and dangerous symptoms.

Over the last 100 years, there are have also been several occurrences when large populations of livestock (cattle, ducks, chicken, etc.) have died due to contamination of their food supply, especially peanut flour or cottonseed, which can sometimes become home to a dozen different strains of aflatoxin. (4)

Unfortunately, aflatoxin makes its way into some popular  “healthy” foods that aren’t actually healthy. The level of aflatoxin contamination in any given food will vary with geographic location, along with how the food was grown.

Additionally, once crops are picked it matters how they are handled, processed and stored, since all of these can affect whether or not aflatoxin is able to survive and thrive. Some research shows that crops being grown in humid locations such as Brazil and China are most likely to contain aflatoxin.

Wondering if the FDA, or any other governing/health authority, does anything to control the spread of aflaxotin in the human supply?

In many countries regulations have been put into play to help limit exposure to aflatoxins by testing and properly harvesting and processing foods known to be contaminated. The FDA has set “actionable limits” (maximum tolerable level of total aflatoxins) for foods like corn and peanuts to try and control how much aflatoxin is can make its way into available foods sold to humans and used for livestock feed.

Food suppliers also try to lower risk for contamination by: keeping crops from becoming overly moist and warm, harvesting food when it’s ripe (crop drying and mold growth can occur if crops are left too long and dry out), and preventing bugs and rodents from accessing the crops and spreading molds.

According to the Official Journal of The Society of Toxicology, most nations have allow a range of aflatoxin in corn and peanuts between 4 to 20ng/g. However there’s evidence that this amount doesn’t do enough to protect everybody, especially people living in under-developed countries where these crops are consumed in high amounts and immunity is already low for other reasons. (5)

Some researchers feel that “most current regulatory standards are not adequately protective even if enforced” considering that more than 1 in 100,000 people in some nations are believed to be at risk for experiencing life-threatening aflatoxin poisoning.

People living in Third World countries are most likely to be impacted by the negative effects of aflatoxin poisoning, but this doesn’t mean that developed nations are totally safe. The consumption of “staple crops” that can contain aflatoxin, such as corn and peanuts, are used globally, and even a small of aflatoxin in the food supply can wind up spreading and causing problems. How badly a person is affected by aflatoxin will depend on factors like their current state of health, level and duration of exposure, strength of their immune and digestive system, and overall quality of their diet.

There are two ways that aflatoxin contamination usually occurs: Either someone consumes large amounts at once and experiences “poisoning”, or they slowly acquire aflatoxin over time in smaller quantities. According to the FDA, poisoning is relatively rare but more dangerous and can lead to problems like liver cancer, mental impairments, digestive reactions, coma, hemorrhages and malabsorption. (6)

Long-term, some of the symptoms that aflatoxin exposure can cause include:

Research shows that aflatoxin targets the digestive organs most, especially the liver by raising the risk for liver cancer, heptitis and liver disease. Long-term exposure to aflatoxin is a major risk factor for cancer of liver called hepatocellular carcinoma, which causes liver scarring, loss of nutrients, inflammation of the digestive tract and other serious problems that can lead to death. (7)

The foods and crops most likely to be contaminated with aflatoxin include:

Experts believe that the biggest threat of aflatoxin to human health globally is the contamination of corn, since it’s such a widely-consumed, staple crop in many parts of the world that people depend on. Corn tends to be grown in humid climates that are likely to have contaminated soils.

The spread of aflatoxin in corn can be hard to control because of the enormous quantity that it’s grown in, how long it’s stored and how often it’s processed to form other foods to be shipped globally. Because some populations eating a lot of corn might already have impaired immunity, aflatoxin in corn is a big concern for liver disease formation.

Aflatoxin in peanuts are another major concern for the same reasons. Peanuts are consumed in high amounts in countries across Asia and also in the U.S, plus they are used in many other types of processed foods (peanut butter, cereals, packaged snacks like cookies, ice cream, etc).

Does cooking peanuts and corn help to reduce aflatoxin?

Aflatoxin molds are not entirely killed off even when corn, grains peanuts or other foods are processed or roasted, so it can even show up in things like peanut butter and many processed products. Agricultural procedures used in the processing of corn, legumes, soy and peanuts can help to reduce contamination, but the risk still cannot be totally eliminated.

One piece of good news is that traditional processes used to make corn tortillas, which employ alkaline conditions or oxidizing steps, can help kill aflatoxin since the mold has a hard time standing up to these ingredients.

Reasons to soak and sprout your grains, nuts and legumes:

Some studies have found that soaking and fermenting grains and nuts can lower the presence of aflatoxin significantly. The Department of Food Science and Biotechnology at Dongguk University in Korea did experiments to test the effects of soaking/sprouting/fermenting soybeans on the level of B1 aflatoxin that was able to survive. They found that these processes significantly decreased aflatoxin levels, as did heating the soybeans at high temperatures. (9)

Heating processes performed at temperatures between 100 and 150°C (equal to 221–302 °F) for 90 minutes significantly decreased the level of AFB1 by 41.9 percent and 81.2 percent respectively. However, this isn’t exactly a great solution because high heat has the ability to alter other nutrients found in legumes, destroy vitamins and turn them “rancid.”

A 2015 study published in the International Journal of Food Microbiology found strong support for soaking, sprouting and fermenting grains, nuts and legumes due to how lactic acid and other beneficial types of bacteria wind up minimizing aflatoxin’s effects.

Lactic acid produced during fermentation reduces mold growth and aflatoxin production because of competition for nutrients between bacterial cells and mold/fungi. (10) Lactic acid seems to ultimately bind to aflatoxins in grains, legumes and nuts, cuts off its energy supply, and also boosts availability of other beneficial proteins, vitamins and enzymes.

How to Lower Aflatoxin

Wondering what else you can do to avoid aflatoxin symptoms? Here are several tips for purchasing and handling foods, plus supplements that can boost detox effects:

Consume the supplements below that can boost detoxification effects, cleanse the liver and improve digestion:

If you’re someone who works out regularly, enjoys strength training or even ...
Read More
View All