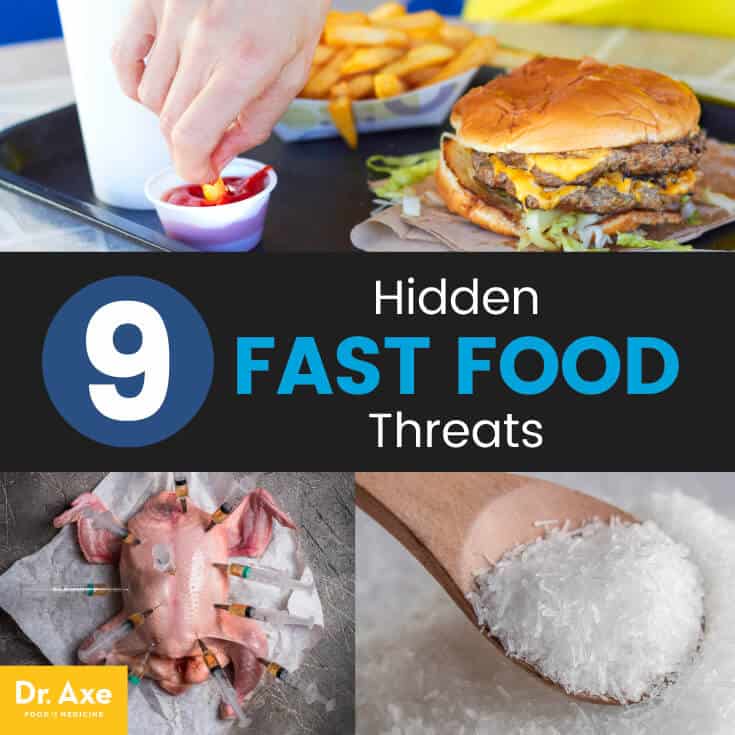 If you’re someone who loves eating fast food, you probably only think about how the food tastes. But what if I told you that you should also be thinking about the short and long term effects of your next burger and fries combo?

Fast food may be quick, easy and cheap, but unfortunately, eating fast food today comes with a lot of hidden risks and side effects. This is a roundup of some of the most terrible and unexpected health effects of the fast food industry today. Warning: eating fast food is about to get a lot scarier.

1. Meat That Isn’t All Meat

Recently, DNA testing really blew the lid off of what’s actually in the “chicken” of many fast food purveyors. According to a Canadian report, DNA testing highlighted Subway as the worst offender when it came to the quality of their chicken meat. Subway is now suing CBC based on the alleged findings, however, CBC is standing by their report.

The highlights, or rather the low points, of this DNA testing include: (1)

This “meat” usage in fast food chains isn’t a new phenomenon, either. Chicken nuggets are often one of the most common orders for children eating fast food. An earlier 2013 report titled, The Autopsy of Chicken Nuggets Reads ‘Chicken Little,‘ ran in The American Journal of Medicine and revealed the real contents of chicken nuggets from two national fast food chains. The researchers found that instead of being chicken meat, the nuggets were mainly made up of fat, along with some bone, nerve and connective tissue. (2)

2. Antibiotics (and More!) in Meat

It’s bad enough you may not be getting 100 percent meat in certain fast food places, but you could be getting a dose of drug residues, too. In a recent report, Chain Reaction II, a whopping 16 out of 25 companies scored an “F” rating. Based on categories focusing on antibiotic use like “good policy across all meats,” “availability of meat produced without routine antibiotics” and “transparency,” the ratings raise some serious health questions. (You can see how all 25 chains ranked in terms of antibiotics usage.) Only two chains, Panera Bread and Chipotle, managed to score an “A.”

The majority of fast food meat is also factory farmed, a practice that turns what could have been a healthy protein source into an unhealthy slab of meat with unwanted, negative health effects. Eating fast food meats truly comes with some major unexpected hazards.

Eating fast food like french fries may also increase your cancer risk. Did you know that french fries contain acrylamide? I know fries are delicious, but they recently made my list of potentially cancer-causing foods for good reason. Raw potatoes don’t seem to contain acrylamide, but when these starchy vegetables get fried up at high temperatures, a chemical reaction takes place that forms acrylamide. The hotter and longer the cooking, the higher the content of this undesirable chemical compound. According to the American Cancer Society, french fries and potato chips appear to have the highest levels of acrylamide. (3)

The National Cancer Institute notes that animal studies suggest being exposed to acrylamide increases the risk of several types of cancer. While more human research needs to be conducted, The National Toxicology Program and the International Agency for Research on Cancer already considers acrylamide to be a “probable human carcinogen.” (4)

Did you know that a lot of fast food packaging contains potential cancer-causing ingredients? According to a 2017 study that appeared in Environmental Science & Technology Letters, fast food packaging contains chemicals known to be harmful to human health. One of the worst class of chemicals found? Per- and polyfluoroalkyl substances, known collectively as PFASs, which are described as “highly persistent synthetic chemicals, some of which have been associated with cancer, developmental toxicity, immunotoxicity, and other health effects.”

Used to keep fast food grease from leaching through the packaging and onto your hands and clothing, the chemicals readily transfer into your food. This particular study found that the chemicals in the anti-grease food containers can readily migrate into the food contents of the chemical-laden packaging. (5)

Much safer fast-food packaging exists, but the problem is that not all of the fast food chains are using it. To avoid PFCs (perfluorinated chemicals) like PFASs, you also have to watch out for the contents of paper plates and bowls, nonstick pots and pans, as well as microwave popcorn bags.

If you can manage to find actual fast food ingredients, you’ll likely see destructive high fructose corn syrup, as well as dangerous artificial sweeteners, in a variety of menu items. Why worry about high fructose corn syrup (HFCS)? The reasons are plentiful, but for starters, HFCS increases your risk of chronic and deadly health problems, including obesity, diabetes, hypertension and heart disease. (6)

A few examples of HFCS and artificial sweeteners being used in fast food today:

If you see anything “diet” on the menu of a fast food chain, definitely think twice because it’s likely loaded with one or more of these artificial sweeteners that actually do nothing to trim your waistline and come with all kinds of seriously dangerous side effects. (See how diet soda destroys your body.) Yikes! Sweeteners are also found in places that you wouldn’t expect, including salad dressing and hamburger buns.

Have you ever had a headache or even worse, a migraine, after eating fast food? MSG (monosodium glutamate) is common in Chinese food, but it also lurks in many fast food options. MSG, one of the worst ingredients you should avoid, is added to food to enhance its flavor. Other food ingredients often mask the presence of MSG like autolyzed yeast, hydrolyzed protein, hydrolyzed vegetable protein, sodium caseinate, yeast, natural flavoring or glutamic acid.

Common known reactions to MSG include headaches, nausea and weakness. Consumers of MSG also sometimes experience wheezing, breathing trouble, heart rate changes, and burning sensations in their forearms and/or back of  the neck. (12) MSG is also one of the top ingredients linked to dreaded migraine headaches. (13)

Who are some of the fast food offenders when it comes to MSG?

If you look more closely at the ingredients in fast food, you’ll easily find food dyes like red 40, yellow 5 and blue 1. You’ll also find questionable preservatives known to have negative health side effects. Numerous studies link both artificial food coloring and preservatives to attention deficit hyperactivity disorder (ADHD) in kids. (17) According to the U.S. Centers for Disease Control and Prevention, more than 1-in-10 children in the U.S. between the ages of four and 17 years have been diagnosed with ADHD. (18)

ADHD only seems to be getting more common as time goes on, yet fast food chains like Burger King continue to put out food items like black hamburger buns for Halloween. The use of food dyes for the holidays and other special promotions targets the population most at risk for suffering the negative effects of these terrible ingredients — our children. Burger King claims A.1. sauce gives the black buns their color, yet experts say the buns likely contain “far more dye than is in the typical type of A.1.” (19) Burger King doesn’t currently list the ingredients of that bun on its website, but it does disclose that its strawberry shake syrup, mint shake syrup and jalapeño chicken fries all contain artificial colors like red 40, yellow 5 and blue 1. (20)

On the positive side of this warning, at least 11 makers of fast food/processed food say that they will get rid of their artificial colors and flavors by 2018 (or sooner). Fast food chains included on this list? Chipotle, Taco Bell, Pizza Hut, Subway, Panera Bread, Papa John’s and Noodles and Company. Panera already took care of this removal in 2016 and even put out “The No No List.” This is an impressive collection of questionable ingredients that the company pledged to keep out of its food. Similarly, Noodles and Company removed all artificial colors, flavors and preservatives from its soups, sauces and dressings back in 2015. (21)

Did you know that eating fast food equates to eating unhealthy inflammatory oils? The majority of fast food chains are using oils that are cheap and inflammatory. I’m talking about refined oils like canola oil, which is often partially hydrogenated to increase its stability. That longer shelf life comes at a real cost, though. Furthermore, more than 90 percent of canola oil is genetically modified. (22) Corn oil and soybean oil are other highly refined GMO oils that are in high demand in the fast food industry.

The list could go on and on so again, but you get the picture.

A recent report, “The Ultimate Mystery Meat,” hightlights fast food’s negatively impact on the environmental. According to the report, released by Mighty Earth and Rainforest Foundation Norway (RFN), soy production is fueling deforestation. About 1 million square kilometers (386,000 square miles) around the world are currently used to grow soybeans. While that recent DNA testing poses the likelihood that we’re getting a whole lot of soy with that fast food chicken sandwich, soy beans are also being produced at such huge quantities to feed that livestock that actually do make into those fast food meat items.

According to this recent report, Burger King is a top offender when it comes to negatively affecting the environment. The report specifically states, “Companies found in Burger King’s supply chain have been linked to ongoing destruction of forests and native prairies – habitat for wildlife like sloths, jaguars, giant anteaters and other species.” (22) So unfortunately, eating fast food can also equate to destroying the environment in some cases.

7 Foods that Cause Inflammation to Avoid (Plus Healthy Swaps)
5

Manganese is an important trace mineral needed for many vital functions, including ...
Read More
View All