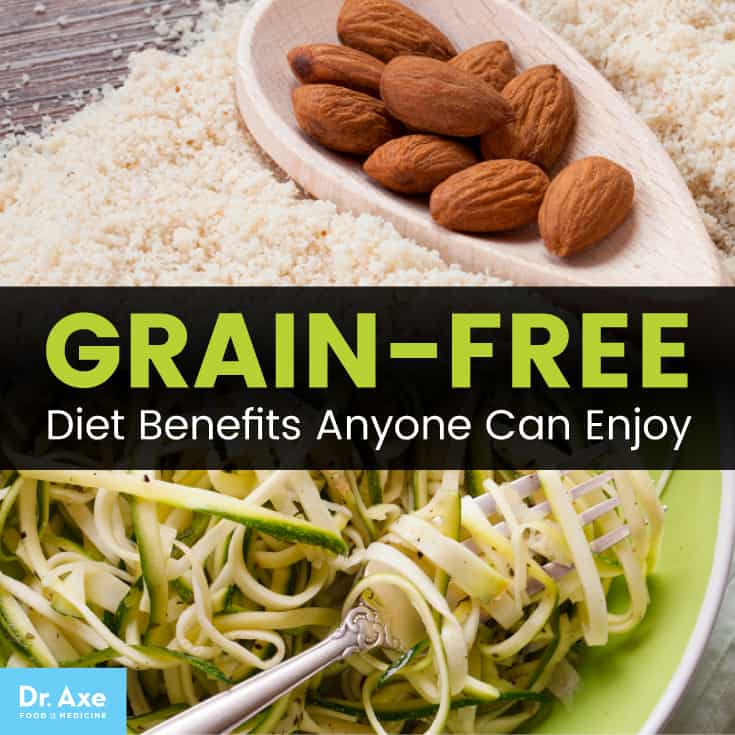 Is a grain-free diet right for you?

There are a number of healthy diet options these days. Depending on your goals, convictions, and conditions or disease risk, you should have no problem (with some research legwork) figuring out what is best for your needs.

One popular option, particularly for those with celiac disease, gluten intolerance or autoimmune conditions, is a grain-free diet.

Taking a step beyond gluten-free eating, those on a grain-free diet usually seek to resolve various health problems.

Take Dr. Kellyann Petrucci, for example: This naturopathic doctor went gluten-free after a personal trainer suggested it and found that it helped her with a number of issues, including stubborn fat and endometriosis.

That wasn’t the whole story, though, because she later realized that the starchy gluten alternatives she loaded up on were doing nothing positive for her. She then dove in to a grain-free diet and found it helped repair her gut and made her the healthiest she’d ever been. (1)

While going totally grain-free is not for everyone, it might be worth a try if you find yourself struggling with issues like poor digestion or autoimmune diseases.

What Is a Grain-Free Diet?

Eating grain-free involves eliminating not only wheat products containing gluten, but also any gluten-free grains, such as rice, corn, oats and barley. On a grain-free diet, the not-technically-grain products of quinoa, amaranth and buckwheat are allowed in small quantities.

Unlike the ketogenic diet, which restricts carbohydrates, a grain-free diet is not a low-carb option. Complex carbohydrates in potatoes, sweet potatoes, carrots and pumpkins are encouraged in moderation.

The grain-free diet does not restrict meat or fish products, eggs, legumes/beans, seeds, nuts, sugar, or dairy, although most proponents of the diet encourage you to pay attention to your body’s biofeedback and eliminate any additional types of food that cause you to have undesirable health consequences.

In many ways, a grain-free diet is similar to other common gluten-avoiding and/or digestive support diets, such as the GAPS diet, alkaline diet, wheat belly diet or Paleo diet plan.

Unlike many of these other diets, a totally grain-free diet has not been studied extensively by researchers. However, a lot of anecdotal evidence (and some studies) supports the assumption that some people may benefit greatly from eliminating grains from their regular eating.

After all, 10 of the top 25 foods Americans consume for the largest percentage of their calories are grain foods — not just any grains, but the worst kinds of processed, refined flours soaked with sugar. The No. 1 slot belongs to grain-based desserts, with yeast breads ranking No. 2. (2)

Like for Dr. Petrucci, many people who have non-celiac gluten sensitivity may also do well on a grain-free diet and find even more of their food sensitivities diminish. (3)

Food addiction is a compulsive issue that affects many people, especially in Western countries like the United States where unhealthy, cheap foods are extremely easy to find and popular to eat. Clinical food addiction is classified by those who overeat despite any consequences, like weight gain, damaged relationships or health issues.

However, a less severe version of this happens to many of us in the form of consistently eating foods we know are bad for us. According to research published in the American Journal of Clinical Nutrition, foods low on the glycemic index, such as many grain-free foods, aren’t associated with the same kinds of addictive responses that high-GI foods cause. (4)

High-carbohydrate foods consistently rank high on the glycemic index, so by eliminating many of those options on a grain-free diet, you can train your brain not to be as dependent on cravings for non-nutritive foods and rather use wisdom in choosing better options.

Related: How Many Grams of Carbs Per Day Do You Need?

The consensus here is not complete, but there is some evidence that eliminating grains might be good for the heart. A study conducted at Eastern Michigan University’s School of Health Sciences looking at the benefits of a Paleolithic diet for people with elevated cholesterol found that the grain-free diet significantly lowered cholesterol, including LDL levels, and lowered high triglycerides. (5)

Other evidence suggests that refined starches, such as the ones found in processed grain foods, can encourage metabolic syndrome, a cluster of conditions that raise your risk of stroke, diabetes and heart disease.  (6)

Interestingly, grains can affect mental health. Reviews on the connection between celiac and gluten have found that this elimination can serve to help with various brain and mental problems, including epilepsy/seizures, anxiety, depression, ADD and autism spectrum disorders. (7)

Even for those without celiac, there are researchers who have seen improvements in a variety of mental issues when eliminating gluten from the diet. (8) In fact, gluten seems to be a major factor in the development and management of schizophrenia, although the reasons why are unclear. (9, 10)

One of the best things about a grain-free diet is that it requires you to cook at home more and pay close attention to food labels. Cooking at home is associated with an overall better quality of diet, regardless of weight loss intentions or specific diet. (11)

5. Could Help Improve Other Physical Symptoms

Gluten and wheat products may be connected to the development of leaky gut syndrome, a problem with the permeability of the digestive system that’s associated with chronic inflammation and a host of symptoms, such as food sensitivities, thyroid problems, fatigue, headaches, skin issues, digestive ailments and weight gain. (12)

Because of this, beginning a grain-free diet might result in a reduction of any number of symptoms from your life, particularly if it addresses a problem you have with leaky gut. People with Crohn’s disease and IBS have reported improved digestive status after going on a grain-free diet.

Foods to eat in moderation on a grain-free diet include:

Tips For A Grain-Free Diet

Totally grain-free eating is a challenge for many people because it probably involves eliminating a lot of your “typical” calories. This means that, like for most diets, you’ll need to be diligent and think ahead, plan your meals, and not just hope that you can figure it out as you go.

Many people begin a grain-free diet with the hopes of eliminating wheat belly, a term coined by Dr. William Davis, founder of the Wheat Belly Lifestyle Institute. This condition refers to the hybridized versions of wheat that we all-too-often consume and the way amylopectin A and gluten can cause weight gain, blood sugar elevation and even diabetes.

The best place to start is by thoughtfully grocery shopping. At the store, carefully read each label for any grain-sourced ingredient, particularly corn-derived products. Most “gluten-free” products are made with heavy, starchy replacements.

For cooking/baking, consider grain-free flours, such as almond or coconut flour. Be careful with condiments as well, as many of them contain hidden grains. You can flavor with more natural enhancers like vinegar, spices, herbs or homemade bone broth.

You’ll need to avoid most alcohol products, particularly beer. There are some grain-free alcohols, such as hard liquor and wine, but be careful with quantities and avoid products with a lot of added sugar.

If you’re used to eating a lot of grains, it may take some time to transition to eating completely grain-free. However, it can be made easier by using my favorite grain substitutes that make healthy stand-ins for those grains we tend toward so much. Here are a few from the list:

Both Paleo and grain-free diets eliminate gluten-containing products and other gluten-free grains.

Paleo goes far beyond eliminating grains. On a Paleo diet, non-grain carbohydrates like quinoa and amaranth are forbidden, as well as legumes, dairy, refined sugar, potatoes and vegetable oils.

I don’t follow a paleo diet because I don’t personally prescribe to the thought process behind it and because I believe it eliminates great sources of nutrition, like that found in raw dairy and legumes. However, many of the benefits it provides and the focus it places on whole, life-giving foods are huge pluses in my book.

Grains aren’t the devil, but for many people, a grain-free life offers relief from some serious health complications.

One problem with grains involves their modern growth techniques and modification. For example, the modern roller mill was invented in 1872. This modern mill allowed the separation of whole grain parts so just the endosperm could be used to manufacture inexpensive, white flour, somewhat like what most people think of when they consider wheat flour.

Then came the next problem: This white flour was now devoid of some of the most valuable nutrients it used to contain. The solution? Genetically modified wheat known as semi-dwarf wheat. This “new” species was able to be cultivated much more efficiently but did not consider the long-term effects on human health.

Now, gluten-containing grains (and some other grains) are a source of inflammation and chronic digestive problems, and not just for sufferers of celiac. The problem isn’t just the gluten — it’s the wheat itself. (13) It shouldn’t be surprising, based on these facts, that gluten sensitivity issues have increased by 400 percent over the past half-century. (14)

Research into the benefits of the Paleolithic diet has also found that a grain-free diet may produce a more balanced digestive microbiome (bacterial environment). (15)

Many people eliminate grains due to their potential to act as inflammatory foods, creating internal inflammation that can create problematic disease risk and pain.

Grain-free diets aren’t for everyone, and for good reason. Many ancient grains and whole wheat products have great benefits for both health and the environment. Some grain supporters are concerned about the impact grain-free lifestyles have on agriculture because they are relatively easy to produce compared to meat and many other products. (16)

So, if you don’t have particular health issues that require you to go grain-free, consider improving the quality of grains you eat rather than nixing them altogether.

In fact, whole grains can support health. Studies have found that, in people who do not have celiac or gluten sensitivity, whole wheat diets:

If you’re concerned about antinutrients, such as phytic acid, try sprouted bread products like Ezekiel bread and sourdough bread. (21)