It’s estimated that 1.4 million Americans (around 0.5 percent of the U.S. population) suffer from inflammatory bowel disease (IBD), whether in the form of Crohn’s disease or ulcerative colitis. (1) Crohn’s disease is a type of IBD characterized by inflammation of the lining of the GI (gastrointestinal, or digestive) tract, abdominal pain, severe diarrhea, fatigue, weight loss and malnutrition.

Worst of all, when left untreated, Crohn’s can cause serious complications due to malabsorption of important nutrients and prolonged autoimmune/inflammatory responses that degenerate healthy tissue throughout the body.

It’s estimated that 75 percent of people with Crohn’s disease eventually undergo surgery — and that up to 38 percent of people who have surgery for Crohn’s experience a recurrence of symptoms within just one year! Although most doctors will tell you that the causes of Crohn’s aren’t entirely clear, that there is currently “no known cure” for IBD, and that taking prescription medications is likely necessary to control your symptoms, emerging research is showing that this might not always be the case.

Experts now believe that a combination of genetic factors, chronic stress, an inflammatory diet, exposure to certain infections or viruses, along with several other risk factors, are to blame for the majority of IBD cases. (2) In fact, a breakthrough study released in September 2016 suggests that a specific fungus may trigger Crohn’s disease. (3)

Today, there is hope for IBD sufferers in the form of holistic medicines, lifestyle changes, dietary interventions and stress-reducing techniques. Many people battling Crohn’s and colitis are able to effectively manage symptom flareups by eliminating highly gaseous and inflammatory foods, learning to manage their stress response, paying attention to their own “biofeedback,” and supplementing with beneficial probiotics, herbs, enzymes and minerals.

Crohn’s affects every person differently, and the inflammation associated with Crohn’s disease can impact various parts of the digestive tract depending on the individual. Often inflammation spreads deep into the layers of the GI tract tissue, which causes changes to bowel movements and disturbs normal nutrient absorption.

Crohn’s disease symptoms can range from mild to severe depending on which tissues become inflamed and how severe the inflammation becomes. Crohn’s symptoms usually develop gradually but sometimes come on suddenly with little-t0-no warning. It’s also common to have periods of remission, meaning times when you experience no signs or symptoms for several weeks or months. Unfortunately, following remission, the majority of people with experience symptoms once again.

According to the Crohn’s and Colitis Foundation of America, when Crohn’s is active, signs and symptoms may include: (4) 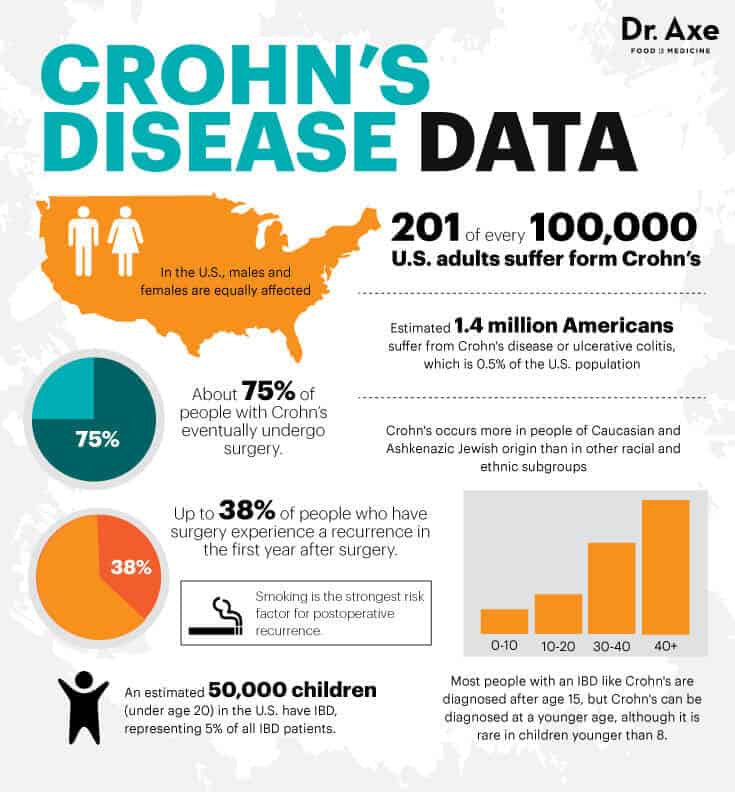 Wondering what puts someone at risk for Crohn’s disease symptoms? Although the exact causes of Crohn’s are not entirely clear, and a multitude of factors seem to play a role in developing IBD, research shows that these are some of the most common risk factors:

Some other possible causes include:

Living with IBD can be hard, but many people find that dietary changes, reducing stress and preventing malnutrition makes a significant difference in symptoms. Here are several of the most impactful ways to lower Crohn’s disease symptoms:

This includes removing dairy, experimenting with removing gluten/most grains, avoiding excess sugar, reducing intake of all processed/packaged foods, eating more prebiotic and probiotic foods, and avoiding caffeine and alcohol as much as possible.

Every person with Crohn’s has a different experience and “triggers,” so it’s ultimately up to you to monitor how you feel when making dietary or lifestyle changes. Some people find that consuming high amounts of fiber and FODMAP foods (those which contain certain types of carbohydrates that can be hard to digest) worsens symptoms. Pay attention to which types of fruits, veggies, grains and beans are problematic. It’s also smart to limit consumption of raw fruits and veggies, and to reduce intake of gas-causing “cruciferous veggies” (broccoli, kale, cauliflower, etc.).

Drinking plenty of water and other low-sugar, hydrating beverages helps to offset fluid loss caused by diarrhea. Drink at least eight 8-ounce glasses of plain water daily. You can also sip on soothing herbal tea or water infused with fruit throughout the day. Meanwhile, it’s important to avoid caffeine, sugary drinks and dairy.

Because malabsorption/malnutrition is a serious concern for those with Crohn’s, it’s beneficial to take supplements including vitamin B12, a multivitamin, iron, a probiotic and omega-3 fish oils.

These are known risk factors for IBD and can interfere with normal digestion and gut health.

7. Replenish good bacteria in the gut

A 2017 study performed by University of North Carolina Lineberger Comprehensive Cancer Center researchers found that a protein called NLRP12 correlates with inflammation in the body. (11) Analysis found low levels of NLRP12 in twins with ulcerative colitis, but not in twins without the disease. When NLRP12 was low, there were lower levels of friendly bacteria as well as high levels of harmful bacteria and inflammation.

Is it Crohn’s disease or irritable bowel syndrome? It can be tough to tell, since both are forms of IBD. Here are a few distinguishing characteristics of each.

IBS is much more common than Crohn’s. How much more common? As many as one in five American adults has signs and symptoms of irritable bowel syndrome, where less than 1 in 100 is diagnosed with Crohn’s.

IBS symptoms can be similar to those of IBD at times, but tend to be much less severe. The most common IBS symptoms include:

As for Crohn’s disease, the most common symptoms include: Here are some alarming statistics when it comes to Crohn’s, which is why a Crohn’s disease diet is worth following. (12, 13)

Crohn’s disease is diagnosed by blood tests, stool sampling, imaging exams and a colonoscopy, which allows your doctor to see the large bowel and parts of the small bowel. If needed, a biopsy of inflamed tissue in the colon can be taken during a colonoscopy to look for changes that indicate you have Crohn’s disease.

Some of the more significant concerns with a bad case of Crohn’s disease include (14):

If Crohn’s disease diet and lifestyle changes, drug therapy, or other treatments don’t relieve your Crohn’s symptoms, then your doctor may likely recommend surgery. Up to one-half of individuals with Crohn’s disease require at least one surgery. However, surgery does not cure Crohn’s disease! (15)

Death due specifically to Crohn’s disease or its complications is uncommon. However, people with Crohn’s disease have a slightly higher overall mortality rate than the general healthy population. The increase in deaths is largely due to conditions such as cancer (particularly lung cancer), chronic obstructive pulmonary disease, gastrointestinal diseases (both including and excluding Crohn’s disease), and diseases of the genital and urinary tracts. (16)