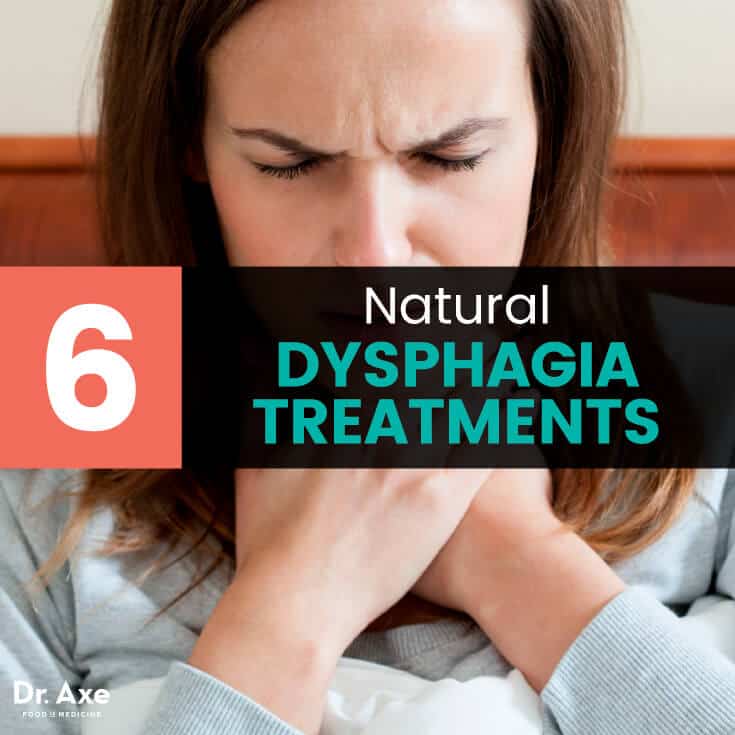 Swallowing is a very complex process. Some people lose their ability to swallow. Dysphagia, or difficulty swallowing, is fairly common among aging adults. It can lead to malnutrition, dehydration, aspiration pneumonia and even death. In the United States, dysphagia affects 300,000 to 600,000 people yearly. Age-related changes in swallowing physiology, as well as age-related diseases, are factors that can lead to the development of dysphagia in the elderly. (1)

There are several natural treatment methods for dysphasia, ranging from postural adjustments, to dietary changes and oral-motor exercises. If you are suffering from dysphagia, it’s smart to know your treatment options. Then you can work with a speech pathologist to decide which ones are right for you.

Dysphagia means it’s difficult to swallow. People with anatomical or physiologic problems in the mouth, pharynx, larynx and esophagus may show signs and symptoms of dysphagia. In addition, dysphagia contributes to many negative health status changes, including an increased risk of malnutrition and pneumonia.

When you swallow, food or liquid moves from the mouth, down the back of the throat, through the esophagus and into the stomach. People with dysphagia have trouble with any stage of this normal swallowing process.

The degree of dysphagia can range from being unable to swallow, to coughing or choking because the food or liquid is entering the windpipe. If you can’t swallow your saliva, food may get stuck in your throat or you may drool. (2)

Signs and symptoms associated with dysphagia may include:

Dysphagia is associated with nutritional deficits, especially following a stroke, and increased risk of pneumonia. Many patients regain their ability to swallow spontaneously within the first month following a stroke.  However, some patients have difficulty swallowing beyond six months. Difficulties swallowing after a stroke may contribute to malnutrition due to limited food and liquid intake. This may lead the patient to have physical weakness or an altered level of consciousness. (3)

Post-stroke pneumonia is another common infection that affects up to one-third of acute stoke patients. It’s also the leading cause of mortality after stroke. Most stroke-related pneumonias are believed to result from dysphagia and the aspiration of food or liquid. Aspiration pneumonia is a lung infection that develops after you aspirate, or inhale, food or liquid, or when you vomit into your lungs. (4)

Swallow physiology changes with age. Decrease in muscle mass and connective tissue elasticity results in loss of strength and range of motion. These age-related changes can negatively impact the smooth flow of swallowed materials through the upper aerodigestive tract. Beyond subtle motor changes, age-related decline in oral moisture, taste and smell sharpness may contribute to reduced swallowing ability in the elderly. (6)

While increasing age leads to subtle physiologic changes in a person’s ability to swallow, age-related diseases are major factors in the presence and severity of dysphagia. (7) Neurological conditions typically cause dysphagia. The most common cause is stroke and dementia. Other conditions that can cause swallowing difficulties include:

Dysphagia is a common symptom in dementia. It’s estimated that up to 45 percent of patients institutionalized with dementia have some degree of swallowing difficulty. (8) Most commonly, patients with dementia exhibit a slowing of the swallowing process, which may increase the time it takes to finish a meal. This can increase the risk for poor nutritional status.

Other causes of dysphagia include a narrowed esophagus, an esophageal tumor, a blockage in the throat or esophagus, GERD, and dry mouth. Food allergies, scar tissue, spasms in the esophagus, pharyngeal diverticula (small pouch that forms in the throat), cancer and radiation therapy are also causes.

Medications — Prescription oral medications or corticosteroids are sometimes used for dysphagia associated with GERD. Medications can also be used to relax the esophagus and reduce discomfort for dysphagia caused by esophageal spasms.

Surgery — Surgery may clear the esophageal path for cases of esophageal tumor, pharyngeal diverticula (pouches in the throat), or achalasia. (9)

Tube Feeding — If swallowing safely and smoothly does not become possible, or if the swallow function does not support nutrition or hydration enough, tube feeding may be needed.

Esophageal Dilation — Esophageal dilation is for people with a tight esophageal sphincter. Your doctor may use an endoscope with a special balloon attached to gently stretch and expand the width of your esophagus or pass a flexible tube or tubes to stretch the esophagus. (10)

Treatment for dysphagia depends on the cause of the swallowing disorder. Treatment is not one size fits all.  Speech-language pathologists play a central role in the management of patients with dysphagia. Speech pathologists may use a wide range of intervention strategies, including compensatory techniques and rehabilitation techniques. These strategies can include short-term adjustments to the patient, food and liquid changes, or environmental changes. The goal is to maintain nutrition and hydration needs until the patient can do so by herself.

Postural adjustments are changes in body and head posture that may be recommended to reduce aspiration or residue. Changes in posture may alter the speed and direction of a food or liquid, and protect the airway to help the patient swallow safely. Studies show that one postural adjustment doesn’t work for all patients.

In general, postural adjustments are intended to be short-term treatments that are used to reduce the chances of aspiration. Specific postures include head tilt, head rotation, chin tuck, side lying and head back. A speech pathologist works with her patient to decide what posture change would be best. (11)

Hospitals and long-term care facilities frequently use thickened liquids as an intervention. They have an effect in helping to control the speed, direction, duration and clearance of chewed food. There’s varying results in studies done to find what thickened liquid works best.

In general, the thicker the viscosity, the slower the liquid moves, which makes it easier to swallow. Typically the least viscous liquid is used for mild dysphagia. Increasingly thicker liquids are used to manage more severe forms of the condition. Research shows thickened liquids can risk of dehydration. Thickened liquids make patients feel full and they are flavorless, which gives patients little motivation to drink. (14)

4. Exercises for the Tongue, Lips and Jaw

These oral-motor exercises are designed to increase range of movement. This helps with speech and swallow functioning. The treatments include stimulation to, or actions of, the lips, jaw, tongue, soft palate, pharynx, larynx and respiratory muscles. Oral-motor treatments range from passive to the more active, depending on the patient’s condition. Range of motion exercises assist with structural or tissue damage. Resistance exercises strengthen the muscles. Resistance exercises involve pushing against a spoon or tongue depressor to create resistance. Falsetto exercises are used to increase tongue base retraction. (15)

Dietary modification is a key part of dysphagia management. Modifying the texture of food may make it safer to swallow. This may include changing the thickness of liquids, chopping or pureeing solid foods. Eating smaller, more frequent meals can be helpful as well. Changing the taste and temperature of food can also make it easier to swallow and more enticing to eat.

Sometimes specific volumes of food per swallow may help patients to stimulate a swallow response — this is considered a feeding strategy. When dealing with diet modifications, speech pathologists or nurses often consult with a dietician to ensure that the patient is meeting her nutritional needs. (16)

Although more research is needed, studies suggest that acupuncture can help people who have difficulty swallowing due to a stroke. This is especially true when acupuncture is used together with conventional stroke rehabilitation. (17)

One trial involving 66 patients suggests that there is a therapeutic effect of acupuncture for dysphagia after acute stroke. In the acupuncture group, 12 out of 34 participants recovered to normal feeding (35 percent), and in the control group, 7 out of 32 patients recovered to normal feeding (22 percent). Although this isn’t statistically significant, it does indicate that acupuncture was helpful for some stroke patients. (18)

It is important to see your doctor if you are having difficulty swallowing or if you’re unable to swallow. If you aren’t able to breath because of food obstruction, get emergency help immediately.

To seek medical attention for dysphagia, you may want to see the following specialists: