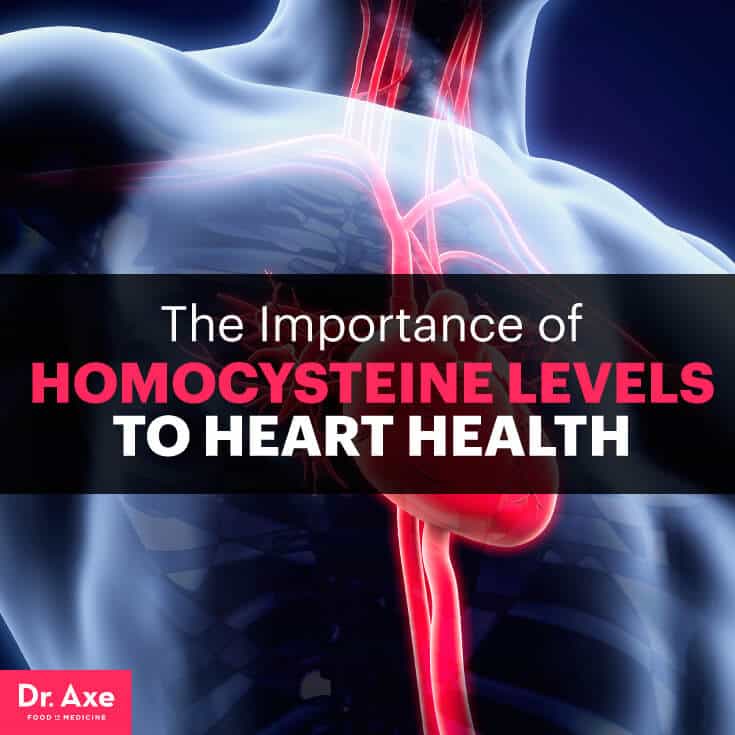 Homocysteine is a specific type of amino acid that’s created in the body during metabolic processes, as opposed to consumed in food. It’s produced in the body as a byproduct of methylation, the process of producing an essential protein called methionine. In healthy people, homocysteine is transformed into a benign product that keeps levels maintained, but when homocysteine isn’t properly metabolized it builds up inside the body and acts similarly to a toxin. This causes inflammation to rise and creates more byproducts that cause changes in cardiovascular, neurological and endocrine systems.

Disorders that cause abnormal homocysteine levels can contribute to a wide range of other health problems and symptoms too — such as decreased vision, fatigue or depression, and skeletal abnormalities in children among some of the most common. Although it’s not always possible to “cure” abnormal homocysteine levels, due to the condition commonly being caused by a genetic inheritance, natural ways to help manage the symptoms it causes include eating an anti-inflammatory diet, reducing stress, supplementing to reduce deficiencies and staying active.

As mentioned above, homocysteine is an amino acid that’s normally not dangerous or unhealthy, until it accumulates to high levels. Homocystinuria is the name of the condition that’s characterized by high homocysteine levels due to a lack of the enzymes that normally metabolize homocysteine. This metabolic disorder is sometimes referred to as an enzyme defect, which is normally genetic and passed down from parents to their children.

Homocysteine levels are also maintained through the presence of certain vitamins and production of enzyme cofactors. This is why deficiencies in vitamin B12, folate and vitamin B6 can contribute to homocysteine problems.

Elevated homocysteine is seen in both children and adults. Children with homocystinuria usually inherited a specific type of genetic MTHFR mutation that interferes with normal enzyme production and a process called methylation. (4) Children can start developing symptoms at a young age, although sometimes adults with unhealthy lifestyles are also diagnosed with high homocysteine levels for the first time.

Symptoms of elevated homocysteine levels can be either mild or severe depending on which types of enzymes and nutrients someone is lacking. Most infants with homocystinuria are usually born normal and healthy until symptoms start to emerge around the age of 3. Some of the earliest signs of abnormal homocysteine levels? These can include vision changes (due to dislocation of the lens) and postural problems (due to skeletal abnormalities and the gradual development of osteoporosis).

Many adults develop high homocysteine at a later age, most without even knowing it at the time. Although symptoms aren’t always present, here is a more robust list of common signs or complications caused by having high homocysteine: (5)

One genetic cause of high homocysteine levels is being born with an MTHFR mutation. (6)

Another reason that homocysteine levels become elevated in adults without genetic enzyme mutations is that they’re suffering from nutritional deficiencies, including those of folate and B vitamins (especially vitamin B6 and vitamin B12). Research has shown that supplementing with these nutrients can help reduce someone’s risk of inflammatory heart conditions, cognitive decline, depression and more since it helps decrease the amount of homocysteine in the blood. (7)

Other than simply not eating enough foods with these nutrients, what puts someone at an elevated risk for folate deficiency or being too low in B vitamins? Studies show that homocysteine levels tend to rise with age, smoking and use of certain drugs, so the first step is to focus on taking care of yourself of as you get older and limiting use of harmful substances. Men also tend to have higher levels.

People who are more likely to run low in these essential nutrients that are tied to high homocysteine levels include:

Your diet can make a big impact on the severity and frequency of symptoms you experience as a side effect of having high homocysteine levels. If you consume a lot of animal products (especially the kinds that are conventionally raised and not grass-fed) and processed foods, you’re more likely to have high homocysteine.

High homocysteine not only increases inflammation, but also makes it harder for the body to detoxify itself of built-up chemicals, heavy metals and toxins. Because processed foods and those containing pesticides commonly contain many synthetic chemical ingredients, it’s beneficial to avoid eating these as much as possible.

Fiber helps protect your arteries and heart, improves digestion, can help regulate your appetite, lowers overeating, and is even tied to healthier cognitive functioning.

Get Plenty of Antioxidants

These include vitamin C from citrus fruits or leafy greens, carotenoids from brightly colored veggies, and vitamin E from things like berries. Drinking fresh vegetables juice is a great way to increase your antioxidant intake every day.

Limit Your Alcohol and Caffeine Intake

Only consume alcohol in very small amounts, roughly one to two drinks per day or ideally less. Caffeine is also tied to higher homocysteine, so try cutting back or eliminating your consumption.

Focus on Consuming Healthy Fats Only

Get More Natural Folate, B Vitamins and Zinc

There’s more on this below.

Many people don’t get enough natural folate in their diets, which can contribute to not only high homocysteine, but also problems like digestive complaints, neurological decline, anemia, fatigue, skin sores and even birth defects in pregnant women. (8) Research has shown that by increasing your intake of natural or activated folate (not the same as folic acid), you can reduce your risk for problems related to high inflammation levels. Foods that are high in folate include beans, legumes, broccoli, spinach and leafy greens, organ meats like liver, ancient grains, poultry, and avocado.

Why is it best to avoid folic acid and get your folate the natural way instead? Folic acid is a synthetic B vitamin found in supplements and fortified foods (like processed grains or orange juice). Real folate is directly metabolized by the small intestines, but synthetic folic acid requires the assistance of a specific enzyme called “dihydrofolate reductase,” which is usually only present in the body in small amounts.

It’s estimated that about 35 percent of adults and 28 percent of all children in the United States use supplements containing folic acid. Unmetabolized folic acid can remain in the bloodstream and contribute to certain health problems, possibly including cancer. (9) On the other hand, it appears that eating a balanced diet with plenty of veggies and plant foods might have the opposite effect — offering protection from things like heart disease and depression.

3. Consume More Vitamin B6 and Vitamin B12

Many patients with high homocysteine experience improvements in symptoms when they consume more B vitamins, especially vitamin B6 and B12. These help increase metabolic functions, including methylation, and can lower symptoms, such as cognitive dysfunction and fatigue.

Vitamin B6 and vitamin B12 benefit the body in many ways, including helping with nutrient absorption, energy expenditure and brain function. (10) Folate also helps vitamin B12 to be absorbed properly, so some experts recommend consuming these two nutrients together. However, there is also concern that high folic acid intake from supplements might “mask” vitamin B12 deficiency symptoms and make neurological consequences even worse down the road. Just another reason to avoid supplementing with large doses of synthetic vitamins and to get nutrients the natural way.

People with metabolic disorders that affect homocysteine levels and contribute to inflammation plus plaque formation are at an increased risk for developing coronary heart disease (also called atherosclerosis) and other disorders. Because of this, it’s crucial to mitigate other risk factors for heart disease, including smoking, obesity, a sedentary lifestyle, diabetes and a poor diet that increases inflammation. Focus on eating a healthy diet, especially one with plenty of high-fiber foods, getting regular exercise and keeping your weight in a healthy range.

If you have high homocysteine and an increased risk for heart problems, it’s also beneficial to consume supplements that can help improve blood flow, cholesterol and blood pressure. These include magnesium, omega-3 fatty acids, Coenzyme Q10, carotenoids and other antioxidants, selenium, and vitamins C, D and E.

6. Get Enough Rest and Manage Stress

The same health conditions and lifestyle habits that raise homocysteine levels can also cause increased anxiety, insomnia, fatigue and depression. One of the reasons this is true is due to the effects that enzyme defects and nutrient deficiencies have on levels of neurotransmitters and hormones — like serotonin, testosterone and estrogen. These hormones govern things like sleep, sex drive, motivation and energy levels. All of these problems are also made worse by high amounts of day-to-day stress.

Tips for dealing with these mood-related conditions include:

High homocysteine is not always easy to spot, so keep up with doctor appointments and ask for specific testing if you suspect a problem.

Wondering how high homocysteine is diagnosed?

Since 2008, almost every state in the U.S. has been required to screen newborns for abnormal homocysteine levels, given the fact that early diagnoses and treatment can make a huge impact on mitigating long-term effects. (11) In adults, homocysteine tests are usually performed through blood tests. Sometimes skin cell tests or enzyme and liver function tests are also performed to assess a patient’s ability to metabolize homocysteine properly. When MTHFR mutations are suspected, a doctor might also utilize a genetic test in addition to observing physical and mental symptoms.

There’s nothing like getting family and friends together for a weekend of ...
Read More
View All