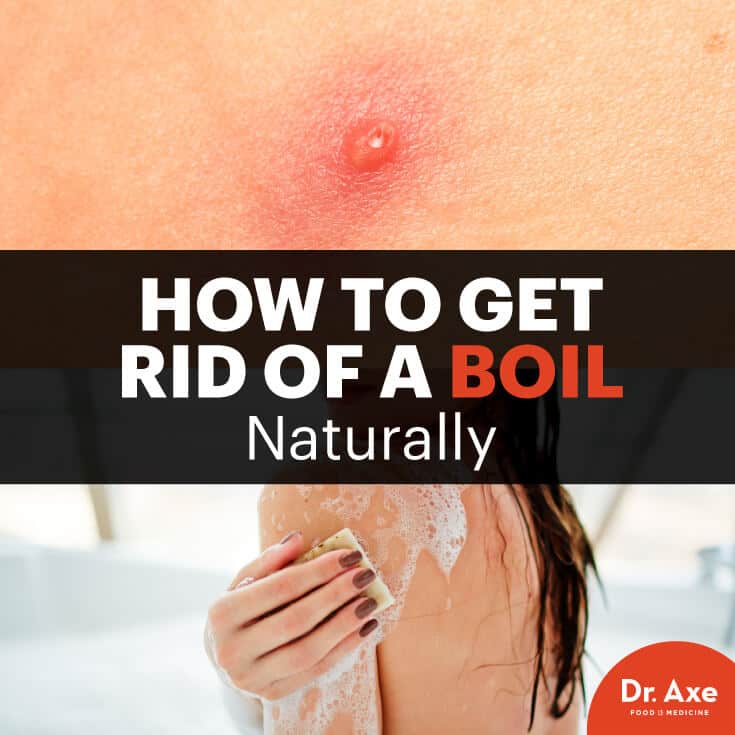 Ever wonder if that growth is just a really bad pimple or a boil? While the two may start out similarly — as a raised, reddish spot on your skin — a boil continues to grow larger and becomes more painful. A boil is like a pimple on steroids. In fact, boils can grow to be larger than a golf ball in size. (1) No one wants that, which is why it’s important to know how to get rid of a boil.

What is a boil? Medically speaking, a boil or furuncle is an infection of the skin typically caused by bacteria. Are you wondering, what does a boil look like? It pretty much looks like a really outrageous version of a pimple. At its worst, it can be quite red, swollen and painful to the slightest touch. A bacterially infected hair follicle or oil gland is usually at the root of a boil’s formation. As this bacteria (most commonly staph) flourishes, a pocket of pus starts to form, and the boil often begins to balloon outward with a liquid-filled center. The most common areas for boils to occur are places on the body where there’s a lot of friction and sweat, like the armpits and buttocks.

The good news is that even conventional medical institutions like the Mayo Clinic agree when it comes to how to get rid of a boil — you can usually care for a single boil at home. (2) So even conventional thinking agrees that natural, home treatment is best as long as you don’t have a serious infection or multiple boils at once. Here is what you need to know about these (sometimes) literal pains in the butt, how you can avoid them, the best home remedies for boils and how to get rid of a boil as fast as possible — like how to get rid of pimples.

What Is a Boil?

A boil is typically round in shape and raised from the skin surface. Boils are tender to the touch. When one first appears, the skin turns pinkish red in that area, and a tender bump arises from the skin’s surface. After four to seven days, the boil will start turning white as pus collects under the skin. It’s very tempting to want to “pop” the boil at this point, but hands off because you can spread the infection and make things even worse (more on this shortly).

Boils can occur in the hair follicles anywhere on the entire body, but they’re most common on the face, neck, armpits, buttocks and thighs. (4) They can also occur in areas like the ear canal or nose. These boil locations can be especially painful. How to get rid of a boil can be more complicated in areas like these as well.

You can have one boil or multiple boils. If several boils appear together in a group, this is a more serious type of infection called a carbuncle. Recurring boils are also known as chronic furunculosis, a condition in which you have crops of boils that occur over a period of time continuously or from time to time.

A boil usually begins as a sore, raised area on the skin that’s pinkish red. It’s typically round and about half an inch in size. If you do have a boil, during the next several days the bump will become larger and more painful yet softer. The reason it becomes softer is the boil is being filled with a clear liquid or pus.

Having one boil rather than multiple boils definitely makes how to get rid of a boil easier and less involved.

Signs of a more severe infection include: (5)

People who are particularly prone to developing boils include:

Most boils are caused by staph bacteria, specifically the strain Staphylococcus aureus. This bacteria can enter the body through tiny nicks or cuts in the skin, or it can travel down the hair to the follicle. Other bacteria or fungi found on the skin’s surface can also cause boils, but staph is the most common cause of boils.

How to Get Rid of a Boil Naturally

If you’ve had a boil, you know how tempting it is to try to pop it, but don’t! If you pop the boil yourself with a pin or needle, you may make the infection worse. Whatever you do, don’t pop, squeeze, scratch or open the boil. Squeezing can actually push the infection down deeper into your skin.

When it comes to how to get rid of a boil at home, the options are easy, natural and cost-effective.

You can then apply a natural antibiotic ointment (easy to find at your local health food store) and a bandage. Make sure the bandage is not too tight to allow for some healing air flow. Change the bandage every day.

I highly recommend avoiding commercial antibacterial soaps. Thankfully, the FDA has banned triclosan. Even the FDA admits that regular soap and water works just as effectively as antibacterial soaps without the harmful side effects, urging everyday people to skip out on the overkill of using antibacterial soap. (7) When you have a boil, there actually is bacteria that you want to kill off so choose a natural antibacterial soap to do the job without harming your health.

In general, always bathe regularly and never share washcloths and towels to help prevent boils. You should also avoid any close contact with someone who has a staph infection or boil.

Dosing suggestions are typically included on the label. Consult a homeopathic physician for suggestions and dosing if needed.

3. Cut Out the Sugar

Diet can play a part in boil formation and healing. Decreasing or cutting out sugar in your diet may help prevent boils before they start. If you have a boil or especially if you have reoccurring boils (furunculosis), it’s important to know that this disease is said to affect people who consume large amounts of sweets or sugar. I strongly believe that watching your intake and sources of sugar will help when it comes to preventing and healing boils, as well as your overall health since high sugar intake is linked to so many serious health problems.

So kick that sugar addiction, and decrease your risk for boils!

To prevent boils, it’s important to always properly clean any minor skin openings like scratches. You might not think of a scratch as anything serious, and most of the time, it’s not. However, even a scratch is still a wound or an opening in the skin that could allow bacteria in, especially if you come in direct contact with someone who has a boil. Always make sure to properly clean all scratches and wounds on the body to prevent infection.

A health care provide usually can diagnose a boil based simply on how it looks. However, a cell sample from your boil may be taken so it can be checked for the presence of staph or another bacteria.

Conventional boil treatment and prevention typically involve the recommendation of frequent use of antibacterial soaps. Your doctor may want to lance your boil, which means cutting a small opening in the boil so the pus can drain out. If the boil is extremely deep or large, your doctor may suggest surgery.

Boils can be very contagious. Don’t share clothing, towels, bedding or sporting equipment with others while you have a boil. Wash your hands frequently to avoid spreading the infection to others as well.

It’s recommended to seek medical attention if you have a boil that hasn’t shown improvement with home treatment after a week and you exhibit one or more of the following:

If an infant develops a boil of any size, he or she should be taken to the doctor immediately.

Possible complications of boils include:

Final Thoughts on How to Get Rid of a Boil

Read Next: How to Get Rid of Warts Naturally

Anger is a normal and healthy human emotion that is linked to ...
Read More
Dr. Axe on Facebook 22 Dr. Axe on Twitter 0 Dr. Axe on Instagram Dr. Axe on Google Plus Dr. Axe on Youtube Dr. Axe on Pintrest 0 Share on Email Print Article 22