Do you tend to bruise easily and have trouble stoping cuts or wounds from bleeding? Or perhaps frequently get nosebleeds or bloody gums? If so, there’s a chance you have a low platelet count.

Having a low platelet count — a condition called “thrombocytopenia” — is a problem with normal blood clotting and bruising that results from having low levels of thrombocytes, colorless blood cells produced by bone marrow. Thrombocytes are responsible for helping form blood clots in the arteries/veins and stopping bleeding. A low platelet count puts someone at a higher risk for internal bleeding or other blood clotting and blood vessel-related problems — and unfortunately can sometimes really take a toll on quality of life.

Idiopathic thrombocytopenia purpura (ITP) is the type of low platelet count caused by an autoimmune disease that affects how platelets are produced and used  in the body. Autoimmune disorders, including arthritis, leukemia and lymphoma, can all trigger ITP, and factors like medication use and toxin exposure can also lower blood platelet counts. Not every patient with low platelet counts has a serious autoimmune disorder. Some cases of mild thrombocytopenia are caused by common lifestyle factors, can be treated pretty easily, and don’t even cause any noticeable signs and symptoms at all.

Thrombocytopenia varies in terms of the symptoms it causes and how it’s managed, depending on how severely someone’s platelet counts have fallen. Some people might need to simply carefully monitor their symptoms and check in with their doctors only periodically, but others need to stay in the hospital temporarily from time to time for emergency care and strictly avoid anything that could potentially trigger bleeding.

As you’ll learn, there are many different causes of low platelet counts, which can make treating the condition somewhat confusing. But fortunately the majority of people with mild to moderately low platelets are able to correct their counts pretty easily and live a normal, healthy life — all by making some diet and lifestyle changes.

How to Treat a Low Platelet Count

If you notice that you’re developing bruises more easily and bleeding for a long period of time even after only getting a minor cut, talk to your doctor to check your platelet counts. A diagnosis of a low platelet count can be made using several tests: a complete blood count, which measures the levels of all blood cells/platelets in your blood; a blood smear, which looks at the actual shape of your platelets; or bone marrow tests and blood clotting tests to check for proper production and function of platelets. You might also need an ultrasound to check your spleen to see if it’s enlarged and possibly tapping platelets inside.

Sometimes thrombocytopenia is only mild and doesn’t even need to be treated, since blood can still clot normally enough. Other times if it becomes severe, your doctor might need to prescribe medications to help ensure blood can clot or change the medications you currently take to stop their side effects. Medications and treatments used to stabilize severely low platelet counts can include platelet transfusions, splenectomy (surgery to remove the spleen), corticosteroids or immunoglobulins, which block effects of the immune system. (1)

Once a diagnosis has been made, you can use the recommendations below to help raise your blood platelet counts, manage symptoms and prevent complications from developing:

Vitamin B12 or folate (vitamin B9) deficiency can both cause mild to moderate low platelet counts. Taking supplements is one way to help resolve this, but the better option is to get enough of these nutrients to begin with. Vitamin B12 deficiency is thought to be one of the leading nutrient deficiencies in the world, and being low in folate puts you at risk for not only having low platelets, but also experiencing pregnancy complications, heart problems and fatigue. Thus, you should consume foods with these vital nutrients:

Aside from making sure to get enough B12 and folate, focus on generally eating an unprocessed, balanced diet to raise immunity against viruses or infections and help your organs detoxify your body of chemicals you encounter. Fresh fruits and vegetables are especially important for meeting your nutrient needs, includin: leafy greens, berries, cruciferous vegetables, fresh herbs and spices.

According to the Platelet Disorder Support Association, about 40 percent of people with low platelet counts reported some improvement in their bleeding symptoms and their platelet counts after following either the macrobiotic diet or the diet recommended in the book “Eat Right for Your Type” by Dr. Peter J. D’Adamo. These recommendations include eating more fresh foods as described above, avoiding packaged/processed foods, and limiting or eliminating dairy, low-quality meat and added sugars. (2)

Heavy drinkers are at a higher risk for having low platelet counts since alcohol slows the production of platelets. According to a report in the journal Alcohol, Health and Research World, heavy alcohol consumption can cause generalized suppression of blood cell production and the production of structurally abnormal blood cell precursors that don’t function properly to clot blood. Research shows that a percentage of alcoholics have defective red blood cells that are destroyed prematurely, as well as abnormal levels of white blood cells and higher likelihood to have autoimmune reactions and frequent bacterial infections. Thrombocytopenia affects up to 43 percent of alcoholics who eat normally and up to 80 percent who do not. (3)

Everyone responds to drinking alcohol differently, so you need to consider your unique situation and medical history to know how much alcohol your body can tolerate without complications. A general recommendation for healthy adults is to have no more than one to two drinks per day (one for adult women, two for men), so those with low platelets should have even less. Avoiding sugary, processed drinks is also helpful since these tend to have lots of chemicals that can also disturb normal platelet production, including artificial sweeteners like aspartame, synthetic colors and preservatives.

Chemicals, such as pesticides found in non-organic produce, mercury from certain seafood, arsenic and benzene, can slow the production of platelets. Tips for helping you lower your exposure to these harmful chemicals include: 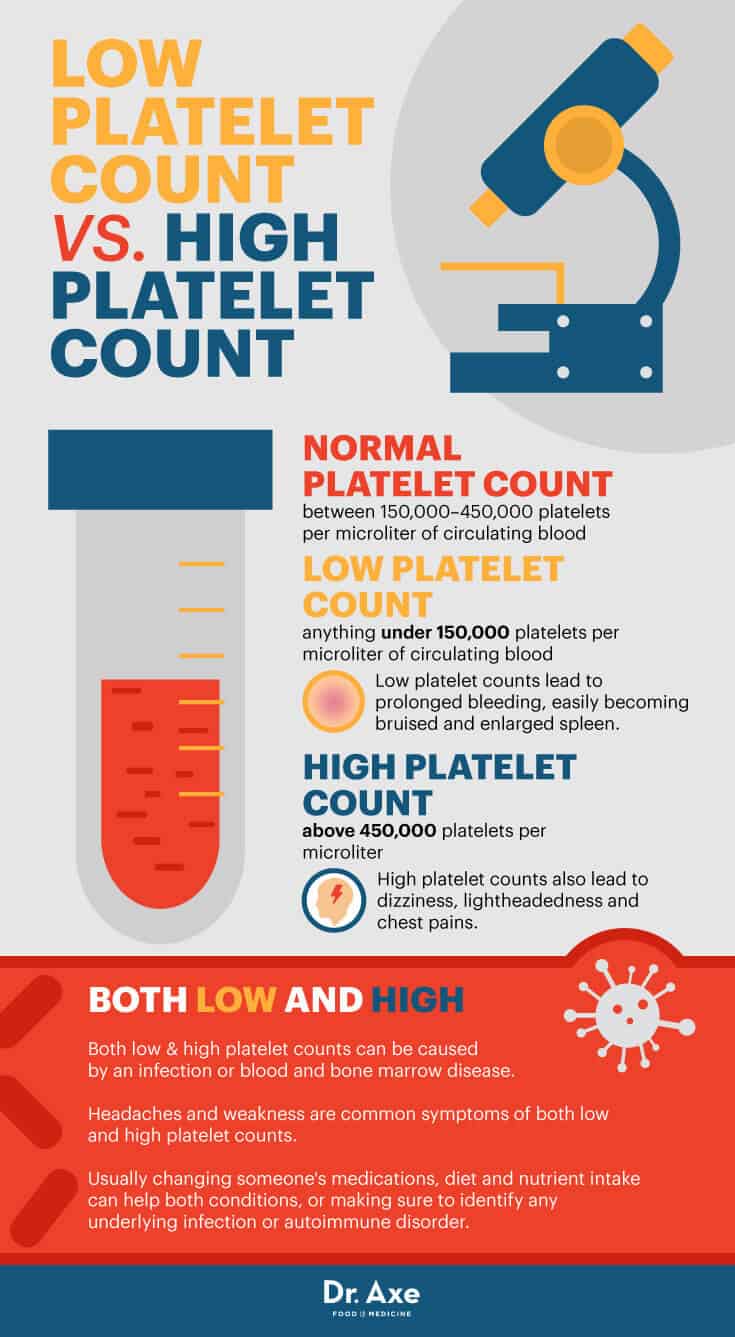 Over-the-counter painkillers like aspirin and ibuprofen can thin your blood and affect your platelet levels. While they do reduce pain, they can also raise your risk for bleeding disorders when used too frequently. How much is too much? It depends on the person, but if you rely on taking these almost every day you might experience any number of adverse side effects.

They might not work as quickly, but you can help manage pain naturally by improving your diet and lowering inflammation. Exercise and anti-inflammatory supplements also help, including omega-3 fish oil, turmeric, frankincense/boswellia and peppermint essential oil.

Aside from vitamin B12 and folate described above to help prevent deficiencies, and anti-inflammatories for controlling pain, there’s evidence that people with low platelet counts can also benefit from taking or consuming more of the following: (4)

6. Protect Yourself from Injuries and Infections

For people who already have been diagnosed with low platelet counts, avoiding injuries and infections is important, since both can worsen autoimmune reactions, spleen enlargement and trigger excessive bleeding. Be careful to avoid injuries related to sports, work, exercise or operating machinery.

Most experts recommend that people with low platelet counts avoid contact sports, such as boxing, football, skiing or karate, which can cause bleeding. Protect your spleen by avoiding exposure to infections and viruses as much as possible, which means staying away from sick family members or co-workers and keeping children with low platelet counts out of day care facilities.

If you have low platelet counts that cause bruising or redness on your skin, try this homemade bruise cream made with natural, soothing ingredients like frankincense, shea butter, jojoba oil and coconut oil.

Here is how platelet counts are normally defined: (5)

Having abnormally high platelet counts is referred to as thrombocytosis. An underlying condition of high platelets could be an infection, or it could be due to a blood and bone marrow disease, which makes the causes similar to those of low platelets. Symptoms include headaches, dizziness or lightheadedness, chest pains, and weakness. Both high and low platelet counts are treated similarly and depend on what’s causing them in the first place. Usually changing someone’s medications, diet and nutrient intake can help both conditions, or making sure to identify any underlying infection or autoimmune disorder.

The most common signs and symptoms of a low platelet count include: (6)

The most obvious sign or symptom of a low platelet count is bleeding that cannot be stopped using normal interventions, like holding a compress against the wound/cut. Some people with find out they have low platelet counts after getting their annual physical exam results, while others might experience a fall or injury and seek help due to a large amount of bleeding.

It’s possible that some people have ITP (the type of low platelets that’s an autoimmune disease) in their systems and aren’t aware of it until something triggers bleeding and raises suspicion, leading to them visiting their doctor — at which point they receive a diagnoses.

Platelets in the blood are constantly renewed by bone marrow, and counts stay normal and consistent through a process of ongoing production and destruction. In healthy people, platelets wind up dying off after about 10 days, at which point they’re replaced by new ones. But in people with low platelets, there are either less platelets being produced, or a faster removal of platelets, which keep counts abnormally low.

Bone marrow is the sponge-like tissue inside the bones, which contains very valuable cells called stem cells. Stem cells mature and develop into various types of blood cells, including red blood cells, white blood cells and platelets. Someone who experiences damage to stem cells inside the bone marrow isn’t able to make the necessary blood cells and platelets needed to properly clot blood. People with normal blood platelet counts have between 150,000–450,000 platelets per microliter of circulating blood, but those with low counts can have much less.

According to the American Society of Hematology, thrombocytopenia can be caused by genetic/inherited factors or as a side effect of people’s lifestyles, including the medications they take, their diets and their medical histories, which all affect how their spleens and bone marrow function. (7) Genetic mutations can cause thrombocytopenia due to diminished production or shortened life span of platelets related to alterations in transcription factors, cytokines, cell surface receptors and signaling molecules.

In cases where low platelet counts are acquired but not inherited (the person wasn’t born with the condition but later developed it), something in that person’s life causes abnormal changes in how bone marrow and the spleen produce, release and destroy platelets in the blood.

Wondering what causes the abnormalities described above? According to the National Heart, Lung and Blood Institute, some of the most common underlying reasons for alternations in normal blood platelet counts include: (8)

Commercial agriculture, in which one crop is often mass-produced on one plot ...
Read More
Dr. Axe on Facebook 22 Dr. Axe on Twitter 22 Dr. Axe on Instagram Dr. Axe on Google Plus Dr. Axe on Youtube Dr. Axe on Pintrest 0 Share on Email Print Article 22