Burning dried wood from the “mystical” palo santo tree, and collecting its concentrated oils, have been widely used in folk medicines and by shamans (“medicine men”) for centuries. Reason being: The palo santo tree has long been thought to have special spiritual qualities.

This is one reason palo santo essential oil is considered a powerful supporter of mental and emotional clarity. Aside from its mental health applications, more recently studies have shown that it has promising benefits when it comes to raising immunity and fighting illnesses.

Palo santo oil has been found to contains cancer-fighting compounds that lower oxidative stress and protect cells. Its protective phytochemicals seem capable of helping to stop disease formation within the digestive, endocrine, cardiovascular and nervous systems.

What Is Palo Santo?

Palo santo (Bursera graveolens), also known as “holy wood” or “wood of the saints,” describes a group of trees that produce a powerful essential oil known for stimulating the immune system and fighting inflammation.

Where does palo santo grow? Over 40 different types of palo santo trees are grown worldwide, mostly throughout Central and South America. The species is native to the tropical dry forests of Ecuador, Mexico and the Yucatán Peninsula in Peru.

The palo santo tree belongs to the same botanical family (Burseraceae) as frankincense and myrrh trees, which also produce beneficial antioxidant-rich oils that are used around the world. The valuable fruit of the B. graveolens tree is a small black seed covered by a red pulp that’s contained in a green capsule. The two halves of the capsule fall off when the fruit is ripe, leaving behind the fruit that’s rich in lipids (fats), which are then concentrated and used therapeutically.

What are the benefits of palo santo? It’s primarily used in essential oil form or burned similarly to other types of incense. The wood has historically been utilized in spiritual ceremonies, as well as in aromatherapy, and is still burned in Catholic churches today.

When smoked as incense, this is called “smudging.” By lighting shavings of palo santo wood, the smell keeps not only bugs but also spiritual “bad energy” away, according to mystics. For example, in Peru, a shaman will light Bursera graveolens sticks, and the rising smoke is said to enter the “energy field” surrounding the site.

Whether in incense or essential oil form, research suggests that palo santo benefits include:

Particularly, it’s been gaining attention for being a natural cancer treatment for inflammatory diseases.

Palo santo helps support the immune system and regulates inflammatory responses, such as those triggered by a poor diet, pollution, stress and illness.

Limonene, the main active ingredient in palo santo, is a bioactive component found in high concentrations in certain plants, including citrus peels, that has well-researched anticancer and anti-inflammatory effects. In preclinical studies of mammary carcinogenesis and inflammation-related diseases, supplementing with limonene helps to fight inflammation, lower cytokines and protects the epithelial barrier of cells.

In 2004, researchers from the University of Shizuoka School of Pharmaceutical Sciences in Japan discovered several other key phytochemicals in palo santo oil that are capable of fighting cancerous cell mutation. These compounds showed remarkable inhibitory activity against human cancer and ﬁbrosarcoma cells.

Considered an oil that’s grounding and centering, both palo santo and frankincense oils are used for emotional and spiritual support since they work like natural anxiety remedies.

Once inhaled, palo santo travels directly through the olfactory system (which controls our sense of smell) of the brain, where it helps turn on the body’s relaxation responses and reduces panic, anxiety and insomnia.

To try smudging with palo santo, which is intended to improve the energy in your environment, you can burn a small amount of the wood in your home.

Another option is apply several drops mixed with a carrier oil (such as coconut or jojoba oil) to your head, neck, chest or spine to help you unwind and fall asleep more easily. You can also combine palo santo with lavender oil, bergamot oil or frankincense oil for additional relaxation benefits.

Known to combat migraines and even stress-related headaches or bad moods, palo santo helps to lower inflammation and increase blood flow that can help turn off perceived pain.

For a natural headache remedy and instant relief, dilute a few drops in water and dissolve the vapors with a diffuser whenever a headache strikes. Or try rubbing some palo santo mixed with coconut oil onto your temples and neck.

Palo santo is known to fight infections and viruses that can leave you with a cold or the flu. By improving blood circulation and recharging your energy levels, it can help you feel better faster and stop severity of feelings of dizziness, congestion and nausea.

Apply a few drops on the chest at heart level or add some to your shower or bath to beat a cold or flu. 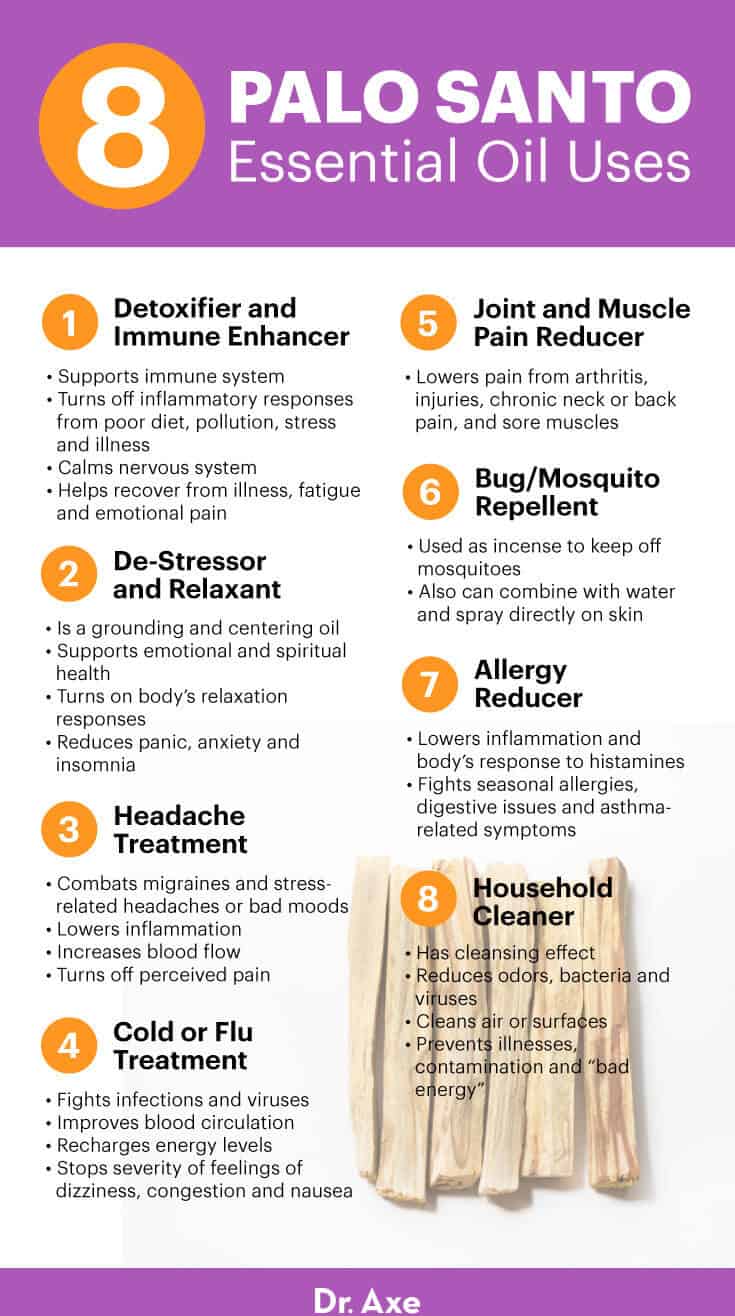 As a great way to naturally lower pain from arthritis, injuries, chronic neck or back pain, and sore muscles, apply several drops with a carrier oil three times a day directly on the point of pain.

For a natural remedy for muscle, bone and joint pain, try massaging the oil mixture into the skin until the oil is absorbed or sitting in a soaking bath with palo santo and Epsom salts.

Historically, palo santo wood chips or sticks have been used to make a natural mosquito repellent (like citronella oil) because it possesses aromatic resins and volatile oils. If you can find wood chips, sticks or cones, burn one or two in an incense burner for about 20 or 25 minutes.

You can also use the essential oil in the same way or combine it with water and spray it directly onto your skin or clothes.

Because it lowers inflammation and the body’s response to histamines, palo santo has benefits for fighting seasonal allergy symptoms, digestive issues and asthma-related symptoms.

Try taking it as a dietary supplement for natural allergy relief (only recommended when using a therapeutic-grade oil) or inhale it from the bottle several times daily.

Similar to clary sage and cedarwood essential oils, palo santo has antibacterial properties and can be used as a natural cleansing agent. It helps reduce odors, microbes and and viruses within your home.

Palo santo wood chip incense or essential oil can also be used to clean the air and surfaces in your home and prevent illnesses, contamination or even “bad energy.” Purify your kitchen, bathroom or appliances by diffusing the oil or running it through your household appliances.

Recipes, Uses, Plus How To Buy

The fruit from the palo santo tree emits an odor similar to fennel (anise) that’s slightly sweet, which is one reason why people like to diffuse the smell throughout their homes or use it in natural cleansing products.

Palo santo is also related to the citrus family and has a somewhat similar sweet note of “clean” smelling pine, mint and lemon. Because they’re related and have similar emotionally stabilizing benefits, you can use palo santo as a substitute for more-popular frankincense oil or myrrh oil.

Is palo santo better than sage? Native Americans used both as sacred plants for smudging (burning). One is not necessarily better, as they have similar uses including enhancing “spiritual purifying and energy cleansing.”

Here are some ways to get started using palo santo oil:

Try using several drops of pure palo santo oil as a detoxification agent by combining it with hot water (not boiling) and drinking it as an herbal tea. It’s great for calming the nervous system and to recover faster from illness, chronic fatigue syndrome or emotional pain.

Try using some in various homemade soap, lotion, incense and cleansing products, especially in any recipe that calls for frankincense, cedarwood, myrrh or lemon essential oil.

What if it won’t stay lit?

You don’t need to burn the wood for very long to create a decent amount of smoke. Try to cut the top inch or so down from the tip then light it, then blow it out which produces a lot of smoke.

Once you’ve successfully lit the stick, waft it around to distribute smoke through the room. Keep the windows closed for a stronger effect, or open if you prefer a less intense smell.

Here’s how to tell if it’s real:

Some reports show that it might be hard to obtain real palo santo essential oil, so you’ll want to buy from a reputable brand and do your research first. In some countries, such as Ecuador, it’s against the law to remove or cut down these trees because they’re protected due to palo santo deforestation.

Even though the oil can be obtained from fallen limbs or even dead trees, even this must permitted through the government in most countries, so therefore manufacturing is limited. The palo santo tree is currently endangered and is on a watch-list, according to the United Plant Savers Medicinal Plant Conservation.

Organic, 100 percent pure oils offer the most benefits and are the only kinds recommended for internal use to reduce inflammation.

Although it’s well-tolerated, applying palo santo essential oil to a small patch of your skin to perform a test is a good idea before using it on larger or more sensitive parts of the body.

Test the oil on your skin somewhere that is less sensitive, such as your forearm or foot, to make sure you don’t have any allergic reaction or other side effects.

As with all essential oils, never use them undiluted on your skin without a carrier oil, and keep them away from your eyes, inside your nose and mucus membranes, children and pets.

Perhaps when you’re spooning with your partner at night, sleeping or resting ...
Read More
View All