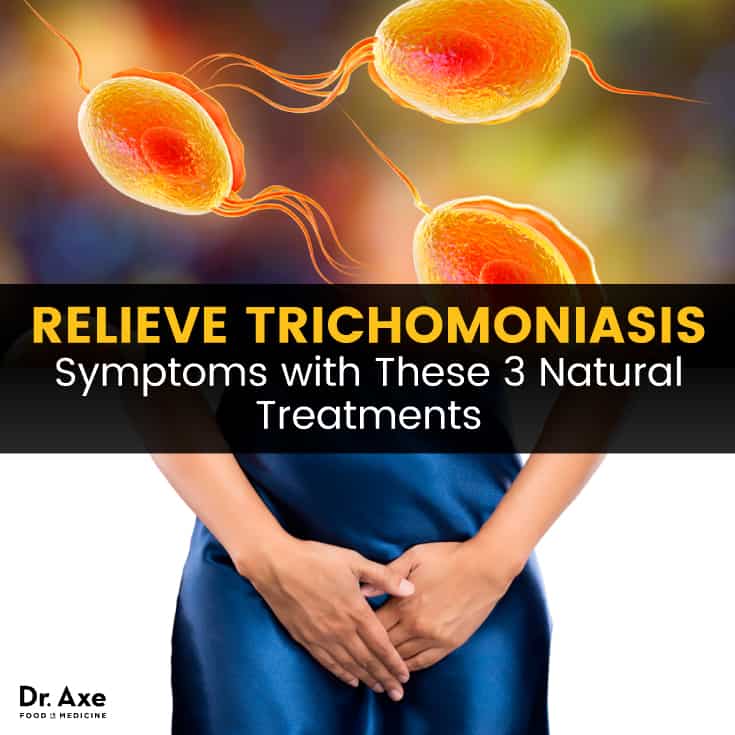 Trichomoniasis is one of the most common sexually transmitted diseases (STD) in the world. It is sometimes referred to simply as “trich.” Although it can cause very uncomfortable symptoms, it’s believed that up to 70 percent of people with trichomoniasis do not have any symptoms. (1) In fact, most people with trichomoniasis do not even know they are infected. The infection is caused by a parasite called Trichomonas vaginalis when it affects humans, although different strains also affect cows, pigeons and other animals.

Thankfully, trichomoniasis is curable. And although trichomoniasis is a less well-known STD than other sexually transmitted infections, it can still be very serious. If left untreated, it can lead to changes in the cervix in women. This may increase the risk of preterm delivery in pregnant women as well as the risk of low birth weight for their babies. (2) Some studies also suggest that trichomoniasis is related to cervical cancer risk, pelvic inflammatory disease and infertility risk. (3) It can also make it easier to get HIV or to pass HIV to a partner. (4)

If you are sexually active or think you may have an STD, trichomoniasis included, you and your partner should get tested — even if he or she does not have symptoms.

How do you get trichomoniasis?

This infection spreads through sexual contact, either between a man and a woman or between two women. In women, trichomoniasis most commonly infects the vulva, vagina or urethra. Trichomoniasis in men is most often found inside the penis (in the urethra). It does not affect other body parts, since the parasite cannot survive in places such as the mouth and anus. (7) Trichomoniasis is very unlikely to pass between two men.

Symptoms of trichomoniasis appear 5 to 28 days after getting infected. (8) It is not known why some people get trichomoniasis symptoms and others don’t, but when they occur they can range from mild to severe. The symptoms can come and go or be fairly constant.

Trichomoniasis symptoms in women include:

Trichomoniasis in women may cause symptoms that are easily confused with a yeast infection or chlamydia. That’s why an accurate diagnosis from a clinic or health professional is highly recommended before you attempt to treat your symptoms.

Trichomoniasis symptoms in men include:

Even if you do not have any symptoms, you should seek trichomoniasis treatment if you or your partner has been diagnosed.

Other risk factors include:

Consider getting tested if you have any of these risk factors for trichomoniasis, and encourage your partner or partners to do the same.

Trichomoniasis causes many unpleasant and even dangerous symptoms or complications if left untreated. In most cases, it can be cured with a single dose of antibiotics that fight the parasite.

What types of antibiotics treat trichomoniasis?

However, since these two drugs are the only conventional therapies for trichomoniasis, sexual health advocates are pushing for natural therapies and new pharmaceutical options to be developed.

How long does it take to get rid of trichomoniasis?

Both metronidazole and tinidazole antibiotics are given as a single dose. One pill by mouth is all that is needed to cure trichomoniasis in most cases. However, the medication will take time to work and it is recommended that you avoid sexual contact for about 7 days after taking the pill, or at least until your symptoms completely disappear. If you are being treated for trichomoniasis, your partner should be treated as well so that you do not get reinfected.

Pay attention to any discomfort or symptoms of trichomoniasis that you may have over the next few months, since as many as one in every five people who are treated for trichomoniasis get reinfected within the next three months. There is no limit to the number of times you can be infected, so practicing safe sex and following the treatment advice above is key to staying trichomoniasis-free!

2. Myrrh. In another study, two capsules of myrrh (Commiphora molmol) for 6 to 8 days were given to women with trichomoniasis every morning. The women took the pills two hours before breakfast, on an empty stomach. According to the study, results were promising. This is likely because myrrh also fights trichomoniasis parasites in lab studies. (13)

3. Zinc sulfate douche. In a small group of women with trichomoniasis that was resistant to conventional drugs (which means this is not considered a first-line treatment!), a 1 percent zinc sulfate solution was used as a vaginal douche. It was effective in nearly every patient who was given the douche. (14)

Although the researchers do not know why the treatment worked, the women had negative follow-up tests for trichomoniasis and also had no more symptoms. It is not clear whether zinc sulfate supplements would have a similar effect.

Many other natural plant extracts show promise because of anti-trichomoniasis activity in early research. The most interesting plant-derived options tend to include polyphenolic compounds (15), alkaloids, isoflavonoid glucosides, oils, lipids, saponins and sesquiterpene lactones. (16) These plants or extracts have been shown to kill the trichomoniasis parasite fairly well in studies on cells (not in actual humans yet, in most cases):

Natural therapies that help boost your immune system may help your body fight the infection. You may also be able to treat some of the symptoms of trichomoniasis, such as vaginal itching or pain, with natural therapies like witch hazel sprays or pads. Witch hazel is frequently used after childbirth to ease pain and swelling with its cooling effect.

If you are treated with antibiotics for trichomoniasis, avoid alcohol for 24–48 hours after taking the pill, since the combination can cause nausea, vomiting and abdominal pain. If you need antibiotics, tell your doctor or healthcare provider about any natural therapies you may also be using so that he or she can let you know if they may interact with your antibiotics.

Do not attempt to self-diagnose, even by matching your symptoms to the list or by looking at trichomoniasis pictures. Because trichomoniasis can have the same symptoms as other STDs or genital infections, wait for a formal diagnosis before using trichomoniasis-focused natural therapies.

Trichomoniasis is like the redheaded stepchild of STDs. It is under-researched and under-funded, despite the fact that it is one of the most common nonviral STDs in the world.

Although researchers, public health agencies and activist groups are starting to take notice, there is much to be done in terms of finding new treatments for trichomoniasis and in educating people about its prevention, symptoms, risks and treatments. In most cases, it requires antibiotics for treatment. However, as trichomoniasis infections become resistant to antibiotics, natural therapies will become increasingly important in its treatment.

Thankfully, a remarkable number of natural plant compounds appear to have strong anti-trichomoniasis effects. While researchers continue searching for the best options — and how to use them — several natural therapies may help your body fight trichomoniasis or ease its symptoms. Add those to the bevy of natural remedies for boosting your immune system and fighting infections, and you’ve got a host of options on hand should this STD come knocking.

We know that coronary heart disease is the leading cause of death ...
Read More
Dr. Axe on Facebook 6 Dr. Axe on Twitter 22 Dr. Axe on Instagram Dr. Axe on Google Plus Dr. Axe on Youtube Dr. Axe on Pintrest 1 Share on Email Print Article 29

If you’ve reached out to a therapist for help dealing with difficult ...
Read More
View All