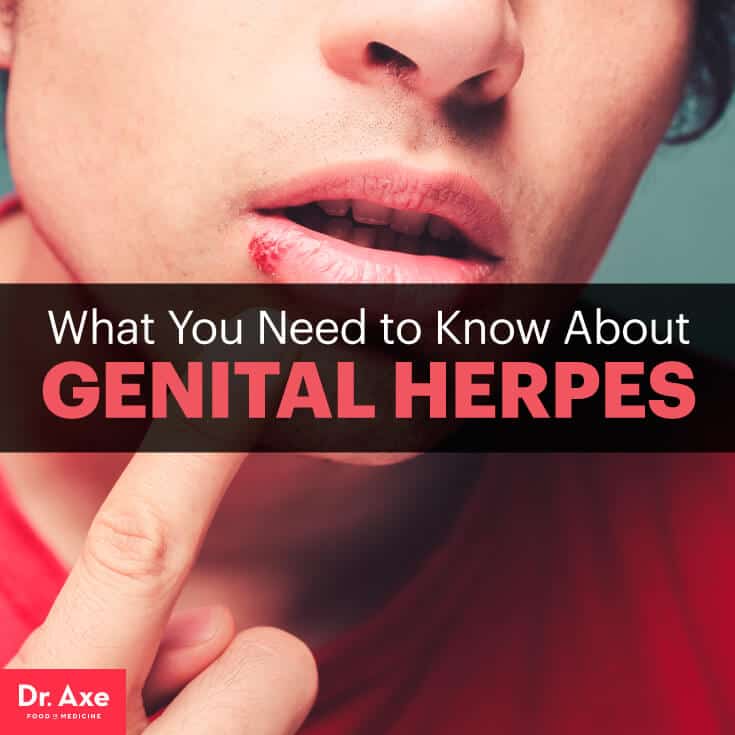 According to the the Centers for Disease Control and Prevention (CDC), genital herpes is a very common, very contagious virus that’s the No. 1 cause of genital ulcers worldwide. (1) In the U.S., approximately 25 percent of all adult women (about one in four, although some studies have found the rate to be much higher) and 20 percent of men (one in five) have genital herpes. And about 85 percent don’t even know it! (2, 3)

Because the herpes virus is sexually transmitted and incurable, a diagnosis of genital herpes can seem overwhelming and often causes a lot of shame and anxiety, in addition to cold sores that can sometimes be very uncomfortable. But the good news is that there are plenty of ways to lower your risk, help stop herpes from spreading and treat outbreaks.

What Are Genital Herpes?

A genital herpes infection is caused from the herpes simplex virus (HSV). There are two primary types of HSV that are responsible for the vast majority of genital herpes cases: HSV-1 and HSV-2. Once infected, someone with genital herpes develops skin sores/ulcers around their genitals and sometimes also feels other symptoms associated with having a virus — such as achiness, tenderness near the groin and fatigue.

The virus can live dormant inside a person’s immune system for a lifetime, periodically causing blisters that burst and turn into open sores or ulcers before healing. Both HSV-1 and HSV-2 infections are acquired from direct contact with someone who carries the virus.

Research shows that the majority of patients with genital herpes have virtually no symptoms at all, aren’t aware that they have the virus and shed the virus in the genital tract before it causes discomfort. It’s also very common to experience a noticeable outbreak only one time and then for the virus to remain dormant and unnoticeable, sometimes for an entire lifetime.

How long does a herpes outbreak last? Everyone is different, but healing of “uncomplicated lesions” (those that are not very severe) usually takes about two to four weeks.

In the past, experts found that HSV-2 was responsible for causing most genital herpes infections, but today an increasing proportion of genital herpes infections are due to HSV-1, commonly thought of as “mouth herpes,” which only causes cold sores on the lips or mouth. Contrary to what most believe about herpes, HSV-1 doesn’t just affect membranes on the lips or inside the mouth — it can also be spread to the genital area. In addition, although it’s rarer, genital herpes can also be acquired from contact with cold sores on the eyes, secretions on the fingers, or ulcers/sores on buttocks and upper thighs.

Experts now believe that oral transmission (primarily due to transmitting HSV-1 from mouth to genitals) is the leading way that people are acquiring genital herpes for the first time, especially teens and young adults. About 50 percent of the new genital herpes infections in young adults are due to HSV-1 and about 40 percent in older adults.

In addition to engaging in oral sex, other risk factors include having any form of unprotected sex, having sex with multiple partners (since the infection rate is so high) and having certain other illnesses that lower immune function (such as HIV, an autoimmune disorder or hepatitis).

Genital herpes affect everyone very differently, but here are some general facts about common genital herpes symptoms and signs:

What does herpes look like, and what does it feel like to experience an outbreak? Signs of symptoms of a genital herpes outbreak can include:

Is herpes curable? Like most viruses, herpes cannot be fully cured, even with early detection and prescription medications.

Researchers characterize HSV by “lifelong infection and periodic reactivation,” although this doesn’t mean that every person with herpes will actually experience breakouts of cold sores throughout his or her life. How often someone has an outbreak, how severe the outbreak is, how contagious the person is and how long the sores take to heal all depend on someone’s individual immune response.

Conventional medical doctors often use certain medications and preventive measures to help keep genital herpes outbreaks to a minimum and lower their duration and severity when they do happen. These can include:

There’s no definitive cure for genital herpes (caused by either HSV-1 or HSV-2), which is spread through direct contact. The likelihood of transmitting the herpes virus to someone else is highest during an outbreak period whenever symptoms are present, but it’s also possible to spread the virus when someone is asymptomatic (don’t have any noticeable symptoms).

Avoid any type of sex or intimate contact if symptoms or sores are present (an ulcer, canker sore, swelling, etc.). If you’re infected, safe sex is crucial for protecting your partner; research shows that when partners avoid sex during active outbreaks, especially if they use condoms, there is a generally low risk of transmission (only 1 percent to 10 percent depending on the partner’s gender and medical history). (6)

That being said, there’s still always a chance that the virus can be spread, so there are no guarantees. According to the Journal of the American Medical Association, some research shows that most HSV-2 infections are actually acquired from people who didn’t know they had herpes and report having no history of symptoms. (7)

One of the reasons so many people don’t know they have genital herpes (up to 85 percent of those carrying the virus!) is because doctors rarely check for herpes when they perform standard STD checkups. Because up to 80 percent of people carry the HSV-1 virus, 30 percent carry antibodies of the HSV-2 virus and many people even carry both viruses, tests aren’t always able to reveal much useful information.

According to Columbia University, blood tests for herpes simplex virus type 2 (HSV-2) are available but aren’t always accurate. Tests can be used when someone is concerned about having been exposed to herpes from a partner, however the debate is still ongoing regarding how useful a blood test is for identifying someone’s risk of developing herpes symptoms. (8)

Even when someone does become infected with genital herpes, symptoms depend on how strong that person’s immune system is.

Symptoms of genital herpes vary considerably depending how much “viral shedding” someone’s immune system performs, which means how quickly the body can fight off effects of the virus and overcome or prevent symptoms.

This is why many, many people are infected with either type of herpes virus (or both) but don’t show any signs or symptoms — because they develop a strong immune response early in life or after they became sexually active.

What are some ways you can improve overall immune function?

Certain herbs naturally act as “suppressive antiviral therapies,” which can help lower the odds of becoming infected with HSV in the first place or of experiencing recurring outbreaks. Antiviral herbs inhibit the development of viruses, help treat infections, and usually cause no or very few side effects. In fact, they have multiple benefits in addition to boosting the immune system, helping lower inflammation and allowing the body to attack viral pathogens more quickly. Antiviral herbs, and antioxidants, that can help you manage genital herpes include:

When a genital herpes outbreak occurs, some of the ways you can help lower pain from sores include:

Is it herpes or something else? How can you tell if sores/ulcers you’ve developed are related to HSV-1 or HSV-2 and not caused by other common conditions? (9)

Read Next: How to Get Rid of Cold Sores Naturally