Ranked as one of the top herbs and spices for healing, anise seed is a nutritional powerhouse when it comes to your health. Plus, besides being associated with an extensive list of anise seed benefits ranging from reduced blood sugar to decreased menopause symptoms, it also boasts a unique flavor that’s ideal for kicking up the flavor of just about any dish or drink.

Commonly added to everything from cookies and cakes to liquors and more, a few sprinkles of this flavor-packed seed can be an easy way to upgrade the nutritional profile of your favorite foods, supplying an added dose of nutrients like iron, manganese and calcium.

Ready to give it a try? Keep reading to learn more about the health benefits of this powerful plant, plus find out how to use and where to buy anise oil and anise seed.

What Is Anise Seed?

Anise, also known as aniseed or Pimpinella anisum, is a plant in the Apiaceae family that is closely related to carrots, parsley and celery. The anise plant is native to the Mediterranean as well as Southwest Asia but is grown and used around the world. The plant can grow to be over three feet tall and produces white flowers as well as an oblong fruit known as anise seed.

The anise taste is very distinct and often compared to licorice root, fennel and star anise. Available in seed, extract and oil form, anise is frequently used as a flavoring for teas, desserts and liquors. Historically, it was also revered for its medicinal properties and used to treat everything from flatulence to menstrual pain.

More recently, researchers have uncovered a host of health benefits associated with anise seed, including improved blood sugar levels, decreased menopause symptoms and even protection against stomach ulcers. Anise may also be associated with improved breast milk production, protection against insects, a reduced risk of seizures and increased urine flow, though more research is needed to confirm these potential benefits. (1)

For those with diabetes, maintaining normal blood sugar levels can be a massive challenge. Symptoms of high blood sugar can range from headaches to increased thirst to fatigue and unintentional weight loss. If left untreated long-term, high blood sugar can eventually lead to nerve damage, kidney failure and even blindness.

Although more studies are needed, there has been some promising research showing that anise seed could help manage your blood sugar. Anise seed contains a compound called anethole, which is responsible for providing its unique flavor and aroma. One 2015 animal study out of India showed that administering anethole to diabetic rats helped prevent high blood sugar by modifying the activity of some key enzymes involved in carbohydrate metabolism. (2)

Other ways to keep your blood sugar under control include upping your fiber intake, getting plenty of physical activity, and reducing your intake of carbohydrates and ultra-processed foods.

2. Blocks the Growth of Fungus and Bacteria

Anise seed has been shown to have powerful antifungal properties that could aid in the treatment of fungal infections like athlete’s foot or ringworm.

A study conducted at the University of Zagreb’s Department of Microbiology Faculty of Pharmacy and Biochemistry in Croatia tested the antifungal activity of fluid extract and essential oil from anise fruits and found that both were able to effectively inhibit the growth of certain types of fungus. In particular, anise was especially effective against yeast and dermatophytes, a type of fungus responsible for many types of skin disease. (3)

Meanwhile, anethole, one of the active compounds found in anise seed, has also been shown to reduce the growth of bacteria. In fact, a test-tube study published in the Journal of Veterinary Medical Science showed that anethole was able to kill off a strain of bacteria known to cause cholera, a condition that causes severe diarrhea and dehydration. (4)

Menopause is a condition caused by a natural decline in hormones as women get older. Common symptoms include hot flashes, vaginal dryness, mood swings and sleep disturbances.

Anise seed has been shown to help relieve menopause symptoms. In one study published in the Iran Journal of Pharmaceutical Resarch, 72 women were given a capsule containing either 330 milligrams of anise seed or a placebo three times daily for four weeks. Anise seed was found to be effective in decreasing both the frequency and severity of hot flashes in postmenopausal women. (5)

Besides anise seed, a few other natural remedies for menopause relief include reducing stress levels, getting enough sleep, and giving supplements like Vitex, ginseng or maca root a try.

Anise oil may also aid in the treatment of postpartum depression. Although many mothers experience the “baby blues” after childbirth, postpartum depression is a serious condition that affects millions of people every year. This mood disorder is most often seen in women within the first year after giving birth, and it can cause symptoms like a decreased appetite, insomnia, mood swings and irritability.

A study published in the Journal of Research in Medical Sciences found that anise was able to reduce symptoms of postpartum depression among 47 participants with functional dyspepsia, a disorder characterized by pain or discomfort in the upper digestive tract. (7)

Following a healthy diet, eating lots of probiotic-rich foods and spending time outside are some other useful natural remedies for depression as well.

5. Could Protect Against Stomach Ulcers

Stomach ulcers are painful sores that form on the lining of the stomach. These ulcers are associated with a slew of adverse side effects, such as heartburn, indigestion, gas, nausea and stomach pain.

While current research is limited, there is some evidence that anise may help protect against the formation of these painful sores. An animal study published in the World Journal of Gastroenterology treated rats with gastric ulcers using anise and found that it helped protect against damage and exhibited anti-ulcer activities in the body. (8)

You can also help treat and prevent stomach ulcers by limiting your use of NSAID pain relievers, avoiding stomach irritants like alcohol and caffeine, and including plenty of anti-inflammatory foods in your diet.

Tiny but powerful, even a small amount of anise seed can help add a boost of extra nutrients to your day, including iron, manganese and calcium. In fact, just one tablespoon of whole anise seed contains approximately: (9)

In addition to the above nutrients, anise seed also contains a small amount of zinc, vitamin B6 and vitamin C.

Anise and fennel are terms often used interchangeably, but although they share some similarities in taste and health benefits, anise and fennel are two completely different plants. Bulb fennel is a vegetable with a bulb-like stem and leaves that resemble fresh dill. Despite belonging to the same family of plants, the seeds, bulb and fronds of the fennel plant can be used in cooking while generally only the anise seeds are consumed from the anise plant. Additionally, fennel seeds typically have a milder and sweeter flavor than anise seeds, which tend to be more astringent.

Anise is also often confused with star anise, a spice with a similar aromatic flavor. This is because, like fennel, they both contain anethole, an organic compound that is responsible for their distinct flavor and odor. However, star anise and anise are unrelated, hail from different parts of the world and share very little in terms of appearance. Because of their similarities in flavor, however, ground star anise may be used in place of anise seed in certain recipes. 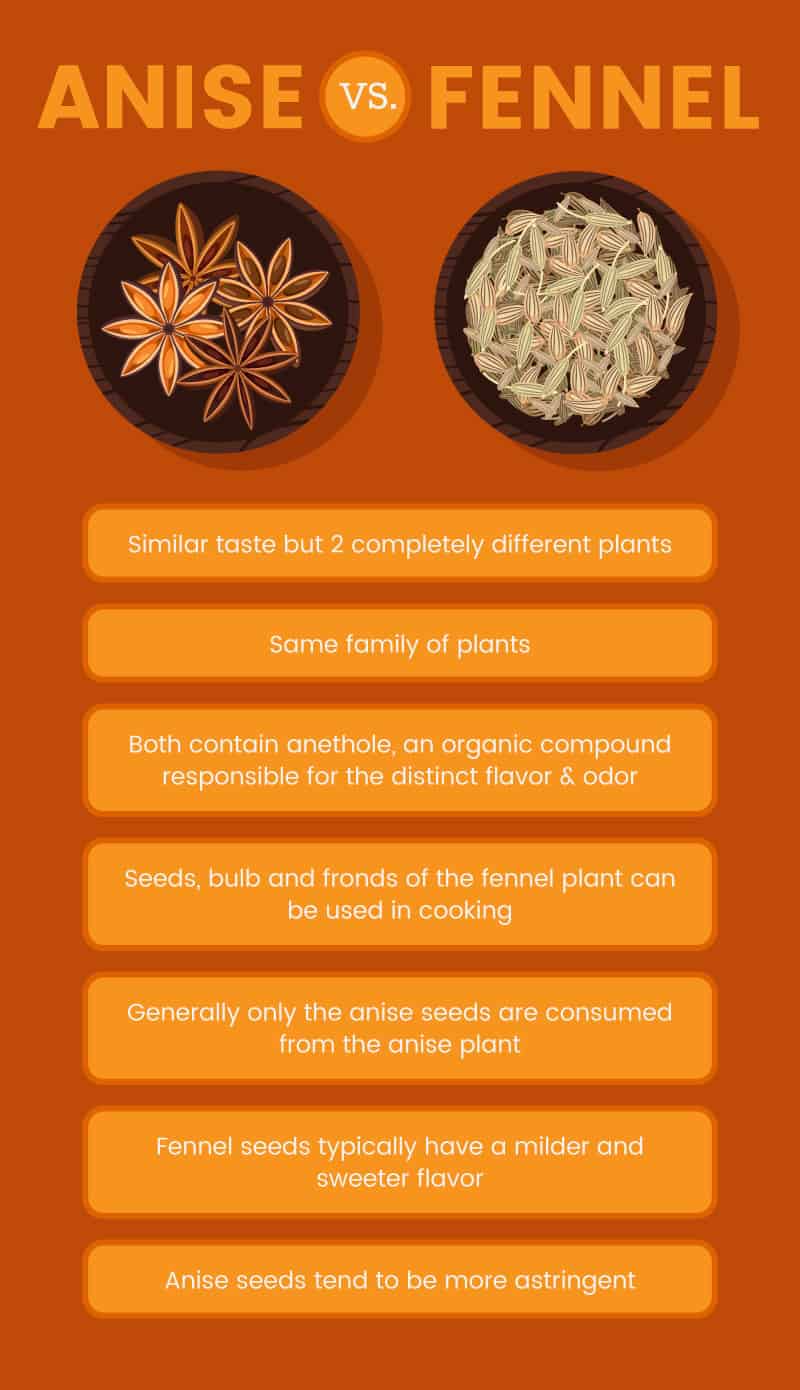 Where to Find and How to Use Anise

Wondering where to buy anise seed and how you can add it into your daily routine? The good news is that this powerful ingredient is easy to find in the spice aisle of most grocery stores and can even be purchased through some online retailers as well. You can also find anise oil and anise extract at many natural health stores and pharmacies.

Anise seed can be used whole or ground in cookies, cakes, candies or drinks. It can also be added to an empty tea bag and steeped in hot water to make a delicious cup of anise seed tea.

Anise oil, on the other hand, can be diffused, applied to the skin or even used in baking. Anise oil for baking works especially well for bumping up the flavor of foods and imparting its powerful taste and aroma.

Anise extract can also be used in the same way as anise oil. When comparing anise oil vs. anise extract, anise extract is less potent as it is diluted with alcohol and water. In recipes, one part anise oil is equivalent to about four parts anise extract. If a recipe calls for one teaspoon of anise oil, you can swap in four teaspoons of anise extract for the same flavor.

Thanks to its distinct aromatic flavor, anise seed makes a great addition to desserts and drinks alike. Here are a few anise seed recipes that you can give a try at home:

First cultivated in the Middle East and Egypt, anise was later imported to Europe and then brought around the world due to its potent medicinal properties.

Historically, anise was used as a spice and flavoring for everything from soups to cakes. It was also used in the preparation of liqueurs like Anisette, a refreshing drink commonly consumed in many Mediterranean countries.

The use of anise even dates back to Biblical times. In fact, anise is considered to be one of the top 14 herbs of the Bible. In the book of Matthew, anise is mentioned as a way to pay tithes alongside about other herbs like mint and cumin seeds.

Today, while anise is often used to incorporate a strong flavor to foods and drinks, it is also used as a natural remedy to soothe coughs, ease menstrual pain and decrease gas.

The amount of anise found in foods is safe and can be consumed with minimal risk of side effects for most people. However, be sure to consume in moderation, as there is not enough evidence to determine the safety of consuming larger amounts.

Anise may cause an allergic reaction in some people, especially those who are allergic to plants in the same family, such as dill, fennel or celery. If you experience food allergy symptoms, such as itching, swelling or hives, after eating anise, discontinue use immediately and consult with your doctor.

Additionally, anise is thought to be an estrogenic food, meaning it acts like estrogen in the body. If you have a history of any hormone-sensitive conditions like breast cancer, ovarian cancer or endometriosis, consuming anise may worsen these conditions.

Finally, keep in mind that anise is safe for pets but should be used only in moderation. Anise is often called “catnip for dogs,” but high amounts are thought to result in negative symptoms like an upset stomach or depressed nervous system.