Anorexia has long been thought of as a woman’s problem — and while it’s true that historically an estimated 90 percent to 95 percent of anorexia nervosa sufferers have been female, the disorder is also becoming more common among men. (1) Today, around 1 percent of all women living in the U.S. are considered to be suffering from anorexia nervosa, making it one of the most common psychiatric diagnoses in young women and also one of the most deadly.

According to Dr. Cynthia Bulik, founding director of the University of North Carolina Center of Excellence for Eating Disorders, eating disorders and anorexia can also be common among older women. In fact, 13 percent of women over 50 suffer from at least one type of eating disorder. (2)

It’s not always easy to spot signs of anorexia since many people with eating disorders attempt to eat “normally” around other people but then eat very little, or nothing at all, when alone. When behaviors associated with anorexia become obvious to family and friends, they commonly include lying about food intake, strictly following certain food rituals or rules — which can be a sign of orthorexia — and frequently making comments about feeling “fat” or unattractive.

Early intervention is thought to be one of the most important ways of preventing complications due to anorexia, which can include infertility, damage to the cardiovascular system, weakened bones (or decreased bone mass), and in severe cases even death. Between 5 percent to 20 percent of individuals with anorexia nervosa will die due to complications of the disorder, meaning it has one of the highest death rates of any mental health condition. While anorexia is a notoriously very difficult disorder to permanently treat (many sufferers wind up battling symptoms of the disorder over and over again throughout their lives), there is more hope than ever before for overcoming all eating disorders. Today, a wide range of effective treatments are available, including therapy, support groups, guided meditation and other mind-body practices, and in some cases medications.

What Is Anorexia Nervosa?

According to the National Eating Disorders Organization, anorexia nervosa is a serious, sometimes even life-threatening type of eating disorder characterized by self-starvation and excessive weight loss. Other definitions of anorexia, such as the one provided by Webster’s dictionary, include “a serious physical and emotional illness in which an abnormal fear of being fat leads to very poor eating habits and dangerous weight loss.”

A key characteristic of anorexia nervosa is being extremely underweight. This doesn’t mean that all individuals who are underweight have anorexia, of course, but someone cannot be diagnosed with the disorder without being at a significantly low weight. “A diagnosis of anorexia depends on an individual’s actual weight (compared to their ‘ideal weight’) rather than his or her degree of weight loss,” explains expert Jennifer Thomas, author of the book “Almost Anorexic.” (3)

Here are some troubling statistics from National Association of Anorexia Nervosa and Associated Disorders (ANAD): (4)

The Relationship Between Anorexia and Other Eating Disorders

There’s a close relationship between anorexia nervosa and other officially recognized eating disorders, according to experts. This can make it hard to properly diagnose and treat anorexia, which is one reason why recovering from the disorder is said to be so hard and treatment so complex. Today, there are two major types of anorexia that patients are diagnosed with: anorexia nervosa binge/purge type and restrictive anorexia nervosa.

In some cases, behaviors associated with anorexia can lead to episodes of binge eating. It’s not uncommon for anorexic patients to report struggling with binge eating disorder along with purging (vomiting, taking laxatives or over-exercising, for example) due to how undereating can cause a strong instinct to overeat. This is often described as “binge-eating/purging type anorexia,” which involves binge eating and/or purging behaviors, along with periods of restriction, all during the same three-month period.

Not every person diagnosed with anorexia binges and purges (a key characteristic of the eating disorder bulimia nervosa) however. Those are who are “restricting type anorexics” rarely ever consume large amounts of foods/calories at once, instead severely restricting their intake.

Because anorexia causes someone to consume fewer calories than the body needs in order to function properly, many health problems can develop as a result. Physical and mental complications associated with anorexia, according to the Eating Disorder Hope organization, can include: (5)

Anorexia is most common among educated, non-Hispanic white, young to middle-aged women. The rate of development of new cases of eating disorders has been increasing since 1950, and prevalence of anorexia (especially among teenagers and young adults) continues to climb. An article published in the Indian Journal of Psychiatry states, “Eating disorders are most prevalent in the Western culture where food is in abundance and female attractiveness is equated with thinness.” (7)

In general, eating disorders are not believed to be caused by one single thing, but rather due to a combination of different overlapping factors. These can include genetic susceptibility, someone’s upbringing, influences from the media, pressure or bullying from peers or family, coexisting mental disorders, a history of body distortion, and use of drugs/substances that weaken cognitive functioning. Research also shows that neurobiological factors — such as malfunctioning of serotonin in the brain, personality traits and traumatic life experiences — can all be factors associated with development of eating disorders.

Dieting for many years is another significant risk factor. The National Eating Disorder Association states that about 35 percent of “normal dieters” are believed to progress to pathological dieting, with up to 25 percent progressing to partial or full-syndrome eating disorders, including anorexia.

Those who seem to be at the highest risk for developing anorexia include:

Although many patients with anorexia nervosa improve over time, a substantial proportion continue to have body image disturbances, disordered eating and other psychiatric difficulties, according to studies. (9) Those who recover most fully receive early treatment, get ongoing support, practice emotional self-care throughout things like meditation and other ways of managing stress, and speak up when symptoms remerge.

To make a diagnosis of anorexia nervosa, which is usually prompted when a family member steps in, a doctor will perform an assessment of eating disorder symptoms aiming to identify key signs and behaviors. The patient’s doctor may ask about any family history regarding eating disorders and other psychiatric disorders, alcohol and other substance use disorders, obesity, family interactions in relation to the patient’s disorder, family attitudes toward eating, exercise, and the patient’s current attitude toward his or her appearance. Anorexia is usually treated through a combination of methods, including: 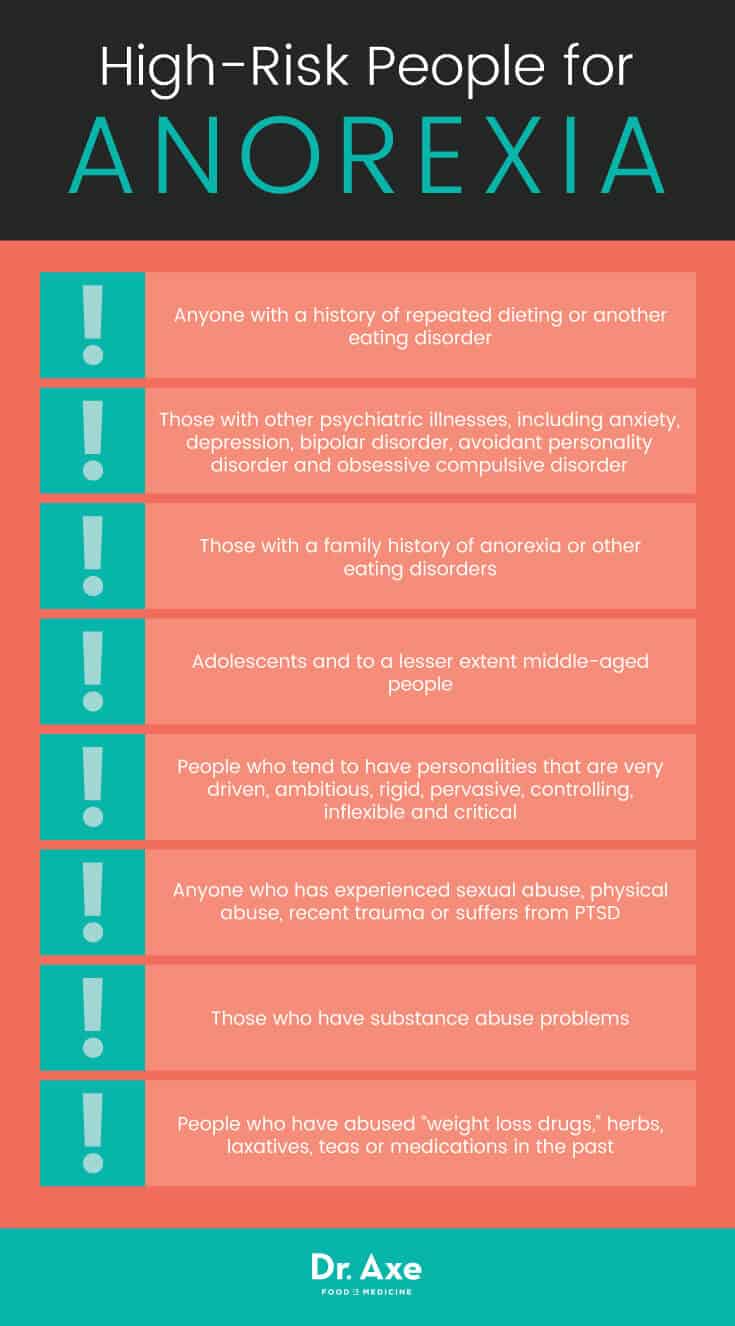 According to experts at the Mayo Clinic, “Anorexia isn’t really about food. It’s an unhealthy way to try to cope with emotional problems. When you have anorexia, you often equate thinness with self-worth.” (11) Cognitive behavioral therapy (or CBT) is one way that those suffering from anorexia can start to uncover thought patterns related to low self-worth and obsession regarding the need for control, thinness and appearing “attractive” to others.

CBT is a kind of “talk therapy” that focuses on changing negative thoughts along with behavioral patterns that are involved in the maintenance of eating pathology. Studies have found that CBT significantly reduces relapse risk and increases the likelihood of good outcomes in recovery compared to nutritional counseling based on nutritional education and food exchanges alone. (12) Among patients receiving CBT, some also receive antidepressant medications to help improve odds of overcoming the disorder. Other types of therapies used to treat eating disorders can include family therapy, cognitive analytic therapy and psychosocial therapy. A February 2018 study involving 22 hospitalized patients with anorexia nervosa found a behavioral program changed habits associated with anorexia more than psychotherapy. (13)

2. Help from a Dietician or Nutritionist

A nutritionist and/or therapist can help someone struggling with anorexia by offering guidance and support in eating a balanced, healing diet that includes enough energy (calories) and specific nutrients in order to meet the body’s needs and prevent symptoms from worsening. Exact calorie needs and dietary plans depend on the patient’s specific health status, willingness to change the diet and symptoms.

In some cases, hospital-based care is necessary to treat existing complications and prevent serious health problems like fainting, heart failure, etc. These treatments can include inpatient programs, partial hospitalization, intensive outpatient and/or residential care in an eating disorders specialty unit, or a stay at another type of rehab facility. During a stay the patient might need to be force-fed if he or she is not willing to eat enough, and he or she is introduced to a variety of foods with support from a counselor. Patients are also monitored to check for improvements in health markers, eating behaviors and coping skills.

3. Support from Family and Friends

Support from a patient’s family and friends can be extremely helpful in overcoming the disorder. If a patient transitions from an inpatient facility back to home, family members are usually prepped in order to handle meal times and emotional fluctuations in a practical and beneficial way.

Some of the ways family members and friends can help include identifying limitations in the family dynamic and structure and learning healthy interactions, ways of handling disagreements, getting treated for substance abuse, and ending any physical abuse or trauma. Family or close friends also help the patient rebuild intimacy and trust with others, can contribute to improved self-esteem, teach interdependence and communication skills, set appropriate limits, provide helpful feedback, and are there to offer compassion, empathy and a sense of closeness during difficult times.

The Maudsley Approach is family-based treatment of adolescent anorexia nervosa and unlike expensive inpatient treatment, it’s less costly but still intensive outpatient treatment in which the parents play an active and positive role to accomplish the following:

During recovery, many patients choose to join a support group online or in person in order to feel understood and that they’re not alone. Speaking with others who have overcome the disorder can be invaluable for boosting recovery and hope.

Experts recommend finding support from a professional therapist and doctor first, and then reaching out to peers. Sharing a sense of vulnerability and connection, while receiving encouragement from people going through the same thing, is believed to be one of the most worthwhile, inexpensive, safe and gratifying things someone can do during recovery. More about joining a support group for overcoming anorexia can be on the Eating Disorder Hope website.

The National Association of Anorexia Nervosa and Associated Disorders (ANAD) runs a very helpful website. It includes many free anorexia support services, such as a helpline, a toolkit, plus providing help in finding a mentor and/or a grocery buddy.

The National Eating Disorders Association (NEDA) also has a website full of helpful information, including online support that includes a screening tool, where to find treatment, free resources and more.

5. Increasing Self-Worth in Other Ways

Other effective ways to relieve stress, build confidence and trust others include:

While seeking help for anorexia or another eating disorder can be overwhelming, it’s critically important in some cases. Anorexia can be deadly, and even when it’s not, it can contribute to long-term problems regarding health outcomes. Getting proper medical evaluations, help and insurance approval are several things to consider when seeking treatment. Look for a doctor and a therapist who are familiar with working with eating disorder patients and ideally who take insurance for treatments.

Many online resources are available to help you explore options and find the treatment that’s right for you. If you’re not sure where to start, mention your concerns to a trusted family member or your doctor, who can perform a medical assessment or any needed specific laboratory tests. Before ruling out treatment altogether, consider several different options that can fit your needs without taking you away from your daily life and obligations.

Read Next: Orthorexia: Are You Obsessed with Eating the Right Foods?