If you’ve never heard of a cherry angioma, chances are you’ve at least seen one — whether you know it or not. How do I know? Well, cherry angiomas are the most common type of angiomas, or benign tumors, adults develop on their skin.

How common? Some evidence shows that by the time someone reaches 70 years old, there’s about a 70 percent to 75 percent chance that person will have multiple cherry angiomas. (1) It’s much rarer for children to have cherry angiomas, as studies show that they’re observed in only 5 percent of adolescents.

What Is a Cherry Angioma?

Cherry angiomas are round (circular or oval) skin growths that appear bright red (hence the name cherry), are usually small in size, most commonly develop on the torso/trunk and most often are non-cancerous. According to a report published in Case Reports in Dermatology, they’re caused from tiny bulging blood vessels and abnormal proliferation of skin cells but usually don’t cause any pain or long-term health problems. (2)

Adults over 30 years old are most likely to develop cherry angiomas, especially if they have family members who also suffer from similar skin papules. (3) Cherry angiomas affect people differently, varying in color and size, sometimes darkening with age or lightning depending on someone’s exposure to the sun, and in some people emerging in more than one location as they get older.

Due to their bright appearance, your doctor or dermatologist should be able to tell you have a cherry angioma without needing to do any extensive testing. While most people form cherry angiomas on the abdomen and trunk, it’s also possible for them develop on the shoulders, upper chest, scalp, face, neck and arms, especially with older age.

What Causes Cherry Angiomas? Risk Factors and Role of Genetics

The primary cause of cherry angiomas — as well as some other similar angiomas — is proliferating endothelial cells, which are cells that line the blood vessels. (4) The blood vessels that dilate and form angiomas are also called venules, which are small in size but can become red and swollen to the point of being very noticeable on the skin. When the blood vessels break open, the bright red color of cherry angiomas is the result. Skin papules are also made worse with age due to weakening of dermal capillary walls.

Why exactly this happens in some adults is not entirely known. Some evidence shows that genetics likely play a role in the development of angiomas, meaning if someone has a family history of related skin problems, that person is more likely to form cherry angiomas themselves.

Other risk factors for developing cherry angiomas include:

Adults over 30 develop angiomas most often, and many find that the number of angiomas they develop only increases as they pass the age of 40. It’s common to notice cherry angiomas on the trunk first and years later to develop similar ones higher up on the body, such as on the chest and even face.

While most cherry angiomas are non-cancerous and unlikely to cause serious complications, in some cases it might be necessary to remove the growth and perform a biopsy to in order to be sure. Biopsy might involve an ultrasound scan, various methods of removing the angioma, and only rarely use of MRI or angiography.

The majority of patients with angiomas have the option of leaving the growths untreated and avoiding any sort of surgery. Sometimes patients choose to have an angioma removed because they don’t like the way it affects their appearance or they’re bothered by it bleeding from time to time, but this is usually a cosmetic choice rather than a health-related one.

If a patient does decide to have one removed for cosmetic reasons, insurance usually won’t cover the cost. The good news is that cherry angioma removal is usually relatively simple and straightforward, plus unlikely to leave a behind a scar. Options for having a cherry angioma removed include: (7)

Tea tree oil has been safely used for centuries to improve many forms of skin irritation, rashes, discolorations and signs of inflammation. Tea tree is even safe to use on angiomas located near the neck and face, is often well-tolerated by those with sensitive skin, and is a very common ingredient in many beauty or skincare products. It’s been found to have natural antimicrobial properties, kills fungus and bacteria that can live on the skin and contribute to irritation, reduces chance for infection if you have an angioma removed, and can help prevent bruising from bleeding.

Other essential oils that are used in commercial angioma products (typically sold online and applied to the skin through a roller ball) are chamomile essential oil, lavender oil, orange oil and pelargonium leaf oil.

To use these oils on your skin, mix one teaspoon of coconut oil (which serves a carrier oil to further help prevent irritation) with five to 10 drops of mixed oils (especially tea tree oil and lavender essential oil). Store the mixture at room temperature and apply it to the skin several times daily. This can also be used on the scalp and face in most patients without side effects, as well as for numerous other skin conditions.

Because bromide exposure has been linked to the development of cherry angiomas, you might have a higher chance of having this skin condition if you frequently come into contact with high amounts of pesticides sprayed on non-organic crops or synthetic food products containing things like brominated flour and/or texture enhancers.

Bromide has also been associated with hormonal changes and thyroid dysfunction, as demonstrated in studies showing that bromide can decrease the amount of iodide accumulated in the thyroid, change the proportion between the amount of iodine retained in the thyroid and the total amount of absorbed iodine, and shorten the half-life of iodine in the thyroid, which is needed for proper hormone production. (8) Some believe that increasing intake of iodine might be able to help treat formation of angiomas, although this hasn’t been proven. A safe way to improve thyroid health without overconsuming iodine is to consume more foods with natural iodine like sea vegetables, spirulina, cranberries, salmon, eggs, yogurt, prunes and strawberries.

Bromide can be found in a type of processed vegetable oil known as BVO, certain soft drinks containing oily substances or syrups, and in processed foods like bread or commercial bakery products. Brominated flour is a common ingredient in products containing enriched flour and is used to add stretch and “mouth-feel” to packaged grains that are left sitting on shelves for long period. Because of its chemical composition, bromide is even used in some pool/hot tub cleaning products, fire retardants and coatings of certain medications.

Some steps you can take to help lower your exposure to chemicals such as bromide include:

Some have found that applying apple cider vinegar (the pure kind that’s fermented and not distilled) to cherry angiomas can reduce their appearance. ACV contains the active ingredient called acetic acid, which is associated with multiple skin benefits, including cleansing, toning, and preventing acne or rashes.

To try this method, dip a clean cotton ball or piece of fabric into ACV, press it against the angioma, and hold it in place for 10–30 minutes. Most have found that doing this twice daily for several weeks offers the best results. If you notice swelling, bruising and other signs of irritation around the angioma, ACV may be able to help you avoid surgical removal by improving the angioma’s noticeability and appearance.

Because hormonal fluctuations, thyroid hormone changes, estrogen dominance and poor liver health have all been associated with the formation of cherry angiomas, improving your body’s ability to detoxify itself of waste might help prevent future angiomas. Ways you can improve detoxification are: 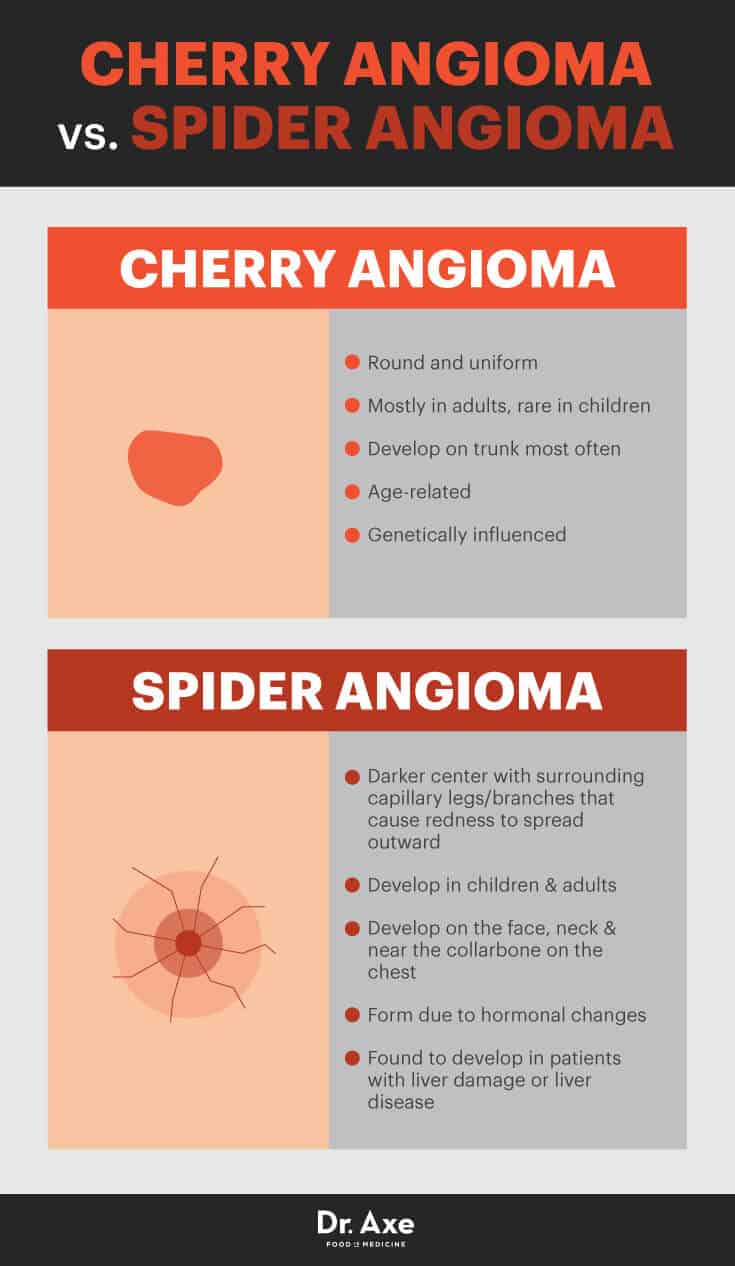 Cherry Angioma vs. Hemangioma and Other Types of Angiomas

Cherry Angioma vs. Skin Cancer: How to Tell the Difference

It’s best not to assume that cherry angiomas are the definitive reason for red patches forming on your skin. There are many reasons that red spots or growths can appear on the skin, including hormonal changes, rosacea, allergies, dermatitis and others. If you notice papules on your skin for the first time, especially if they’re bleeding often or are painful, mention this to your doctor in order to be sure there’s not another cause.

If you have sensitive skin or an allergy to any of the home remedies mentioned above (apple cider vinegar, for example, or essential oils), don’t use these products on your skin, and get your dermatologist’s advice regarding safer treatment options instead.

Also be cautious regarding advice to burn off angiomas on your own at home. Some patients are able to safely burn cherry angiomas using heated pins or needles, but there are always risks involved. This can sometimes be painful, lead to infections, or leave behind marks and scars. A better idea is having an angioma removed professionally and safely by a dermatologist in a professional setting.

Read Next: Rosacea Treatment: 6 Natural Ways to Treat Your Skin