Although the vast majority of cases are preventable, blood clots are a serious public health problem that kill hundreds of thousands of adults each year. In the U.S. alone, up to 300,000 people die each year from blood clot conditions called deep vein thrombosis (DVT), formed when blood thickens and clumps together, then travels and causes complications, such as a stroke. (1)

While sometimes blood clots cause symptoms noticeable enough for a patient to visit the doctor, such as leg pain, symptoms of deep vein thrombosis can also go unnoticed, which can be very dangerous. If thrombosis runs in your family, you’re over the age of 60, or you have a family history of other heart and vascular complications, you’re at a higher risk for developing DVT.

Your health is still within your control, however — since research shows that other lifestyle-related risk factors greatly impact your chances of developing DVT, including being overweight or obese, inactivity, smoking, and taking birth control or hormone replacement drugs. Improving your diet, staying active, losing weight and controlling your blood pressure are important steps in naturally preventing clots and stopping them from returning.

What Is Deep Vein Thrombosis (DVT)?

Thrombosis is the term for a medical condition that occurs when a blood clot (called a thrombus) forms in an artery or vein. Deep vein thrombosis, often just called DVT for short, is specifically the kind of thrombosis caused when a blood clot develops in a deep vein, most often in the lower leg, thigh or pelvis. On the other hand, when a clot forms in a vein that’s closer to the surface of your skin, this type of thrombosis is called “superficial thrombosis.”

It’s possible for a deep vein thrombosis clot to detach from the original site where it developed and travel through the bloodstream to other areas of the body, including your lungs or brain (this is called embolus). When that happens, either a condition called a pulmonary embolism (PE) can develop in your lungs, or you might even suffer from a stroke if blood supply is cut off to your brain.

This is the biggest risk associated with DVT: a clot traveling and forming a blockage in important blood vessels, which at times is deadly. (2) Pulmonary embolism is commonly fatal and occurs when a clot breaks free and blocks the arteries of the lungs.

DVT/PE often occur together, and when they do this is called venous thromboembolism. Estimates from the Centers for Disease Control and Prevention reveal that between 10 percent and 30 percent of people with venous thromboembolism die within one month of diagnosis, and many die suddenly without little to no warning.

Blood clots are made up of clusters of blood cells called platelets, which every person has and relies on in order to survive. Platelets are responsible for helping blood to clot within an injured or damaged artery/vein so you don’t bleed too much whenever you’re hurt, scraped, bruised or operated on.

Platelets stop excess bleeding and help repair injured blood cells along with a network of other red blood cells and a type of protein called fibrin. However, this process can also sometimes lead to blood clot formation, at times causing symptoms and serious complications.

Not everyone with a clot experiences any noticeable symptoms at all or has any idea that he or she has developed one — however, the clot itself usually still causes inflammation, swelling and localized problems internally, at the site where it forms. 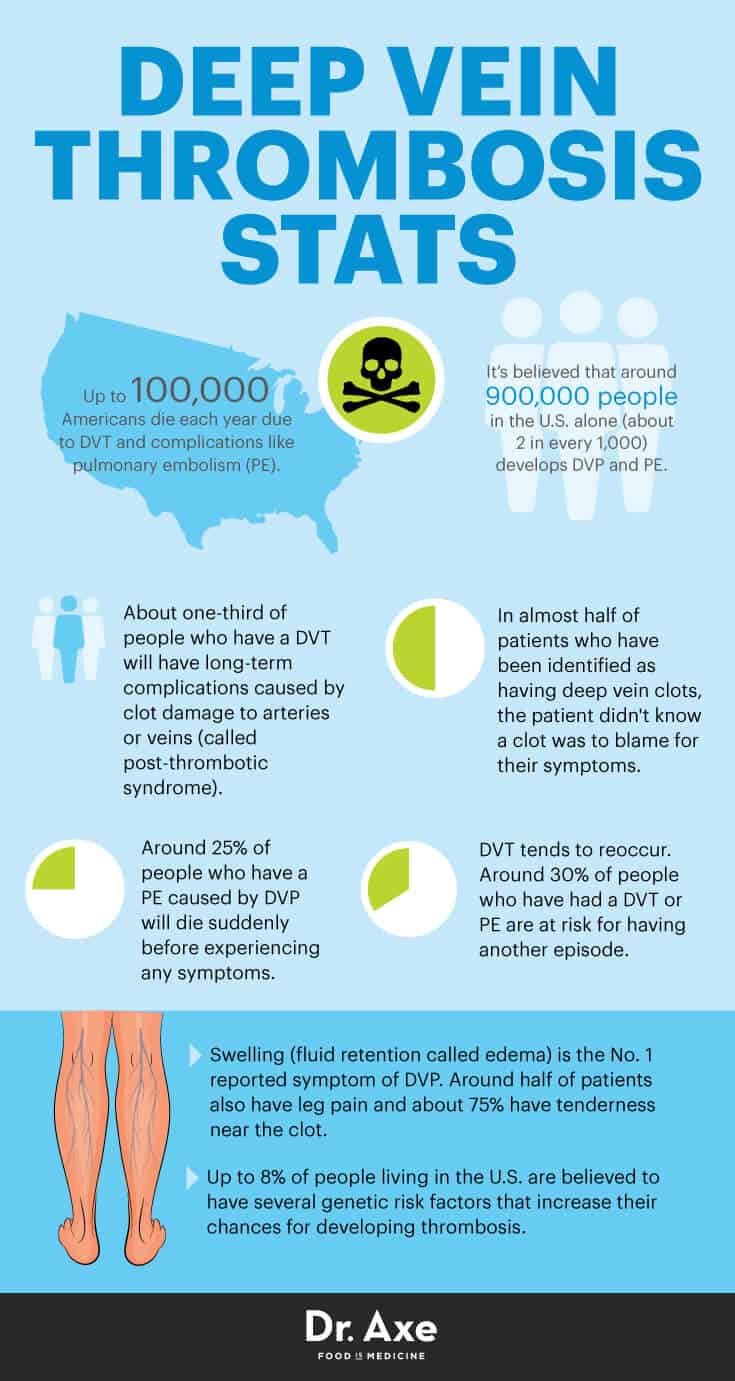 Risk factors that put you at a higher risk for DVT include: (3)

Although DVT doesn’t always cause symptoms, some people experience the following: (4)

Symptoms of a blood clot in your leg might be an indication of where a clot is forming, although not always. According to the National Heart, Lung, and Blood Institute, blood clots in the thighs are more likely to break off and cause complications than blood clots in the lower legs or other parts of the body. (5) If you suspect you have a clot in one of your thighs, let your doctor know right away and keep a close lookout for other symptoms.

Treatment depends on the individual case, along with someone’s personal history of other medical problems. Unfortunately under many doctors’ orders, many people (especially those with a history of vascular problems or injury that leaves them less active) remain on medications that are used to treat DVT for their entire lives.

Blood-thinning medications like Xarelto can cause many different side effects, including bleeding complications that can sometimes be severe and even life-threatening. Women who are pregnant also cannot take warfarin, since it’s been tied to birth defects. So taking these adverse effects into account, it’s important to weigh the pros and cons of taking any blood-thinning drugs and do all you can to control DVT symptoms naturally.

If you do use medications to help treat your DVT, talk to your doctor about limiting your use to one to two months or less, using the minimum dose. Also make sure to avoid taking other drugs at the same time as blood thinners that can cause negative side effects, including aspirin, Advil or ibuprofen.

Leading a sedentary lifestyle, including sitting still for long time periods of time at a desk or elsewhere, can make you more likely to develop DVT. The best type of exercise plan for keeping your heart and veins healthy is one that combines aerobic exercise (like running, HIIT workouts or cycling) with resistance/strength-training moves and also stretching for flexibility. Incorporate exercises to strengthen knees and legs, such as squats, walking and lunges, if you have a history of clots.

Make sure to clear with your doctor that you’re ready to exercise before starting if you recently had a clot identified. (9) In addition to starting a regular exercise program, take breaks regularly from sitting and make sure to stretch. For example, if you’re taking a long car or plane trip, make a point to get up at least every hour (ideally even more often if you’re at work, such as every 20 minutes) to take a break.

Sneak more exercise into your day with exercise hacks by building short break periods in your normal routine, so you can walk, move or stretch your legs to keep blood flowing. If you’re healing from surgery or an injury, get up and start moving as soon as it’s safe to.

Some medicines and disorders increase your risk for blood clots and can contribute to DVT. These include hormone replacement drugs (usually used by menopausal or postmenopausal women), birth control pills, medications to control blood pressure and cancer treatment drugs.

It’s a good idea to check with your doctor regularly to see if your medications can be lowered or if they might be contributing to any problems. If you do decide to take blood-thinning drugs (Coumadin or Jantoven, for example), your doctor will likely want to monitor you to make sure your dose is not too high or used for too long.

Related: Natural Blood Thinners You Already May Have in Your Kitchen

Sticking to a healthier diet as you get older is crucial for managing your weight, controlling your blood pressure and maintaining a healthy cardiovascular system. Foods that are high in vitamin K, potassium and magnesium are especially beneficial for regulating blood flow. Green leafy vegetables, cruciferous veggies, avocado, sweet potatoes and bananas are high in these nutrients. However, keep in mind that vitamin K can interact with blood-thinning drugs, so make sure you’re being monitored if you’ve been prescribed these.

You also want to be sure you’re drinking plenty water and other hydrating liquids — just stay away from added sugar and too much alcohol or caffeine. It’s also helpful to include certain herbal treatments and supplements in your treatment or prevention plan to boost recovery and heart health. Foods, herbs and supplements that can have natural anticoagulant and anti-inflammatory effects include: (10)

Smoking cigarettes or using electronic cigarettes and other tobacco products are all serious risk factors for developing thrombosis, especially when combined with other risk factors like being overweight. (11) Quit as soon as you can with help from things like joining a support group, trying hypnosis or meditation geared toward overcoming addictions, or talking to your doctor about other ways to effectively wean yourself off.

Wearing compression stockings can help lower pressure, swelling and pain in the affected area where a clot has formed. Keeping the affected area raised and applying moist heat where it hurts can also help you heal. Compression is also used because reduced pressure lowers the chances of developing another clot in the future, and it might help you start being more active earlier on.

Typically, a stocking is worn on the leg that reaches from your foot up to about your knee. These stockings can be bought online or given to you from your doctor. You can take off the stocking when exercising or showering and use it along with other natural remedies to control pain, such as essential oils, stretching and massaging.

Deep vein thrombrosis should be taken very seriously if you start to experience any signs or symptoms of pulmonary embolism. This condition can damage the lungs and other organs in the body and even cause death, so always contact your doctor right away if you notice sudden shortness of breath, chest pains, dizziness, a fast heartbeat or coughing blood.

Although there are ways to help prevent DVT naturally, still be sure to take your medications as they’ve been prescribed by your doctor. Don’t change medication dosages without being monitored since this can cause side effects.