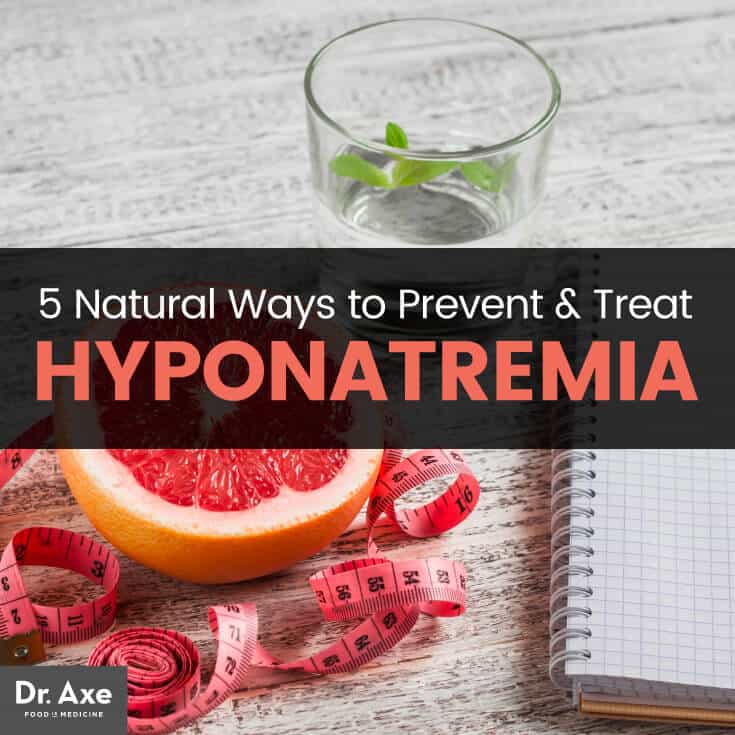 Hyponatremia means low sodium levels in the blood. It’s the opposite of the condition called hypernatremia, in which sodium levels are very high. Both conditions often occur when patients are staying in the hospital. This is especially true if they are receiving fluid intravenously, have an existing condition like kidney or heart disease, or are in critical care.

Surveys have found that hyponatremia develops in 15-30 percent of all patients during hospital stays. (1) Hyponatremia and related electrolyte imbalances can develop during exercise or in extreme heat, when dehydration symptoms are more common. When hyponatremia is mild, or sometimes, even moderate, it’s commonly asymptomatic. This means no noticeable symptoms occur that the patient is aware of. However, when it’s more severe, hyponatremia symptoms typically include headaches, nausea and in some cases even seizures or a coma.

Treatment for hyponatremia usually comes down to regulating fluid levels in the body. In other words, intake and excretion of salt versus water must be balanced. Ways you can prevent hyponatremia from developing, or reverse the condition once it’s already occurred, include:

Hyponatremia is a type of electrolyte imbalance characterized by having abnormally low sodium levels in the blood. Sodium (salt) often gets a bad rap because too much of it affects blood pressure and contributes to fluid retention/swelling. However, it’s actually an essential electrolyte. All electrolytes have important jobs throughout the body. This is because of how they carry an electric charge when dissolved in bodily fluids, including blood. (2) Some of the roles that sodium has include:

What is considered low sodium, versus normal sodium? (3)

The doctor will adjust fluids to correct the imbalance, depending on if a patient has hyponatremia (too little salt in their blood) or hypernatremia (too much salt), . To prevent electrolyte imbalances, you can monitor your water intake, diet and medications. Normally your body obtains sodium through your diet and loses the right amount through your urine or sweat. So, as long as you don’t have kidney problems, you should be able to naturally balance sodium and water levels by making a few healthy changes.

Common Signs and Symptoms of Hyponatremia

The problem with having too little sodium, and, at the same time, too much water, is that it causes your cells to swell. Depending on how much swelling and fluid retention occurs, hyponatremia can be very serious — even deadly in severe cases.

The most common hyponatremia symptoms include: (4)

Hyponatremia happens when sodium levels in your body become too diluted; too much water is present in the blood in proportion to sodium. Hyponatremia symptoms and complications are caused by cells swollen with water, which causes fluid retention. This can even lead to serious neurologic impairments and fluid retention in the brain (brain edema).

Situations and health conditions that cause hyponatremia most often include: When a patient sees a doctor regarding hyponatremia symptoms, or is already staying in the hospital when the condition develops, the healthcare provider will usually look for any indication of electrolyte imbalance by taking several measurements:

Once your doctor diagnoses you with hyponatremia, he or she doctor might decide to restore normal fluid levels by giving you intravenous fluids or medications. These will depend on what type of hyponatremia you have and how it impacts your total blood volume. The goal of fluids and medications is to raise sodium levels/low water retention.

Typical treatment for hypovolemic hyponatremia is administering saline solutions to bring up sodium levels. If water levels in the blood are too high (euvolemic hyponatremia), then water/fluid restriction will be prescribed for a period of time. Sometimes, in addition to reducing water intake and increasing sodium, you also may need to take diuretics (which increase urination). When hyponatremia is severe and brain damage is possible, around 3 percent sodium solution is usually administered to control complications.

Kidney dysfunction, kidney disease, liver disease or damage, thyroid disorders, adrenal fatigue and heart disease can all increase your risk for hyponatremia, so it’s important to treat these underlying conditions. If you have any of these health problems, be sure to monitor your symptoms closely, eat a healthy diet, and speak to your doctor about ways to control fluid levels so that too much fluid/water does not accumulate in your body. Anyone with these conditions needs to be especially careful not to dilute the amount of sodium in their body too much through medications, intense exercise, diarrhea or vomiting, etc.

Because your adrenal glands produce hormones that control fluid levels in your body, improving adrenal health is an important step in preventing symptoms due to electrolyte imbalances. Dietary steps you can take to take care of your adrenals include eating more fresh veggies and fruits, foods high in B vitamins (like fish or eggs), mushrooms, coconut oil/coconut milk and seaweed. Reducing stress, getting enough rest and sleep, plus exercising in a healthy way (not too much or too little) can also keep your adrenals working properly.

2. Monitor How Much Water You Drink (Especially During Exercise)

While drinking enough water is generally very important for numerous bodily functions, drinking too much (especially within a short period of time) is also possible. Drinking too much water will dilute the amount of sodium in your blood in proportion to water, triggering the symptoms described above. You might also lose some sodium through sweat if you’re intensely exercising when hyponatremia develops, such as when completing a marathon.

When you’re active, you might think it’s best to keep drinking as much water as possible in order to stay hydrated. If you’re losing lots of electrolytes through your sweat, what you actually might need is a sports drink or beverage that supplies sodium (in addition to other electrolytes).

Try to drink only as much fluid as you are thirsty for and are losing due to to sweating. A good rule of thumb is to drink 8-10 ounces of water 15 minutes before you begin working out, then during your workout drink another 8 ounces every 15 minutes. (7) Another good way to know if you’re drinking about the right amount of water during the day (even you’re not active) is to check the color of your urine: you’re looking for a pale yellow color as often as possible, as opposed to clear or very dark.

If you consume very high amounts of hydrating foods plus water, but not enough natural sea salt or sodium, it can help to make some changes. The primary way that we obtain sodium is from consuming it through our diet in the form of sodium chloride, or table salt. Today the average person gets more than 75 percent of their sodium from processed foods, including low-quality meat products, frozen dinners, condiments, canned goods, fried or fast foods, etc. Some names that sodium goes by in these processed foods include: monosodium glutamate (MSG), sodium nitrite, sodium saccharin, baking soda (sodium bicarbonate) and sodium benzoate.

Rather than getting enough sodium from these unhealthy foods, try adding real sea salt to your meals that you make yourself at home— this way you can control the amount of salt you’re taking in (plus you’ll get many more benefits due to obtaining numerous minerals if you use real sea salt). Some healthy foods also naturally provide smaller amounts of sodium, including meat, milk, beets, and celery. (8)

4. Change Your Medications, Including Diuretics

If medications such as diuretics or antidepressants are contributing to your condition, then your doctor can recommend how to change your dosage in order to increase sodium levels and prevent water retention safely. Although you should never change medications or stop taking them without speaking with your doctor first, you might be able to help treat conditions like bloating, anxiety and depression using natural remedies like a healthy diet, essential oils, exercise, stress reduction and certain supplements.

5. Work on Balancing Your Hormones

If you’re currently pregnant, going through menopause, or experiencing other hormonal changes, this may be one reason you’re experiencing swelling, fatigue, mood changes, etc. due to electrolyte changes. Premenopausal women appear to be at the greatest risk of hyponatremia due to how women’s sex hormones affect fluid and sodium levels. Those with stressed adrenal glands are also an increased risk.

If you have mild symptoms, like some muscular weakness or headaches, after intense exercising or spending time in high temperatures/humidity, there’s probably no need to see a doctor. But, if you suddenly have unexplained symptoms that indicate an electrolyte balance, especially after high-intensity activities, or if you have conditions like low blood pressure and/or diabetes, then visit your doctor.

Look out for signs and symptoms of low blood sodium that come on suddenly. This is important after a hospital stay, surgery, partaking in a marathon/long-distance race, a bout of dehydration or illness (like a fever). Get to know any side effects that might occur due to medications you take, or from an existing illness. Take precaution if symptoms last for more than one day, getting help right away to prevent the situation from worsening.

While psychedelic mushrooms and hallucinogens seem like relics from a hippie, Grateful ...
Read More
View All