While knowledge about the benefits associated with probiotics has exploded over the past decade, many people are still unsure about how prebiotics and postbiotics work. Probiotics are the “good” (or “friendly”) bacteria that colonize the digestive system and support many functions of the immune system.

Prebiotics essentially feed probiotics, helping them survive and reproduce through the process of fermentation. What are postbiotics? Postbiotics are produced as a byproduct of the fermentation process carried out by probiotics. Examples include organic acids, bacteriocins, carbonic substances and enzymes.

A 2014 report published in the Journal of Gastroenterology states: (1)

Probiotics are alive nonpathogenic microorganisms present in the gut microbiota that confer benefits to the host for his health. Some of these beneficial effects are determined by secreted probiotic-derived factors that recently have been identified as postbiotic mediators.

Researchers now believe that for certain people suffering from inflammatory conditions, the use of postbiotics may be a smart alternative to the use of whole bacteria (in probiotic form). Due to their ability to decrease inflammation and help maintain colonic and intestinal homeostasis, postbiotics might be the next wave of supplements used to foster better gut health.

Postbiotics are byproducts of probiotic bacterial fermentation. (2) When probiotics feed on certain types of fiber molecules in order to thrive, they leave behind “waste products” that are collectively called postbiotics. (3) The microbiota therefore naturally releases postbiotics, which in turn help regulate the composition of the microbiome.

Being a waste product might not sound too impressive, but more research is now showing that postbiotics might play an essential role in gut health. According to the Postbiotica website, an organization that’s affiliated with the University of Milan, “Most of the immunomodulatory activities of bacteria are associated to their metabolites.” (4) Benefits associated with postbiotics include helping treat:

While there’s still more to learn about how exactly postbiotics contribute to homeostasis, they seem to help regulate the microbiota via anti-pathogenic activities and supporting growth of beneficial bacteria. They also seem to help the immune system adapt to changes in gut bacteria by having regulatory effects.

Researchers at Probiotica explain that compared to taking probiotics, using postbiotics may have certain advantages. These include the fact that they don’t contain any harmful bacterial components, they’re considered very safe, they don’t require the need for bacterial growth or colonization in the host (the person taking the product), they can be used in lower concentrations, and they may contain higher amounts of active components.

Examples of postbiotics include:

The body is home to trillions of gut bacteria, which together are called the microbiome. Another name for this bacterial community is the microbiota, the large collection of microorganisms that live in symbiosis within the human body. There are three main categories of bacterial components/substances that help keep the microbiota in balance. These include:

Bacteria that make up the microbiome are capable of sending inflammatory signals to the brain and elsewhere throughout the body, changing how food is digested, how hormones are produced, how capable insulin is of lowering glucose in the blood and many other functions. (5)

When pathogens take over the microbiome, dysbiosis occurs. This is associated with problems like diarrhea, allergies, IBS or IBD, and many others. Often these problems are treated with medications including anti-inflammatory or immunomodulatory drugs. However, these can cause side effects. Postbiotics are produced during metabolic processes carried out by lactic acid bacteria. They can mimic activities of probiotics in certain ways, in addition to helping probiotics thrive. Lactic acid bacteria that are supported by postbiotics have many benefits within the microbiome, including helping remove heavy metals from the body and decreasing the presence of viruses and toxins. (7)

One of the most promising things about using postbiotics in place of probiotics is due to how postbiotics mimic the beneficial and therapeutic effects of probiotics while avoiding the risk of administering live microorganisms to patients who cannot tolerate them, such as those with immature intestinal barriers or impaired immune defenses.

Additionally, there’s some evidence that probiotic bacteria that are killed due to heat in the gastrointestinal tract may function as postbiotics. These microorganisms seem to retain their structure and continue to have beneficial effects on the host, such as accelerating intestinal barrier maturation and healing. (8)

2. Reduce the Presence of Harmful Pathogens

The body is home to both beneficial and harmful bacteria. Some natural substances — including certain herbs and plants — have antimicrobial properties, allowing them to diminish harmful bacteria and therefore helping prevent infections and illnesses. Researchers believe that postbiotics may have some of the same antimicrobrial abilities, which is why it’s speculated that postbiotics may be the next frontier in supporting the immune system against pathogens.

Some of the pathogens that postbiotics may be capable of diminishing include listeria monocytogenes, clostridium perfringens, salmonella enterica, and escherichia coli.

Studies have found that probiotic bacteria, including lactobacillus casei DG (LC-DG), produce beneficial postbiotic byproducts that together help modulate inflammatory/immune responses. (9) In studies. postbiotics — such as the fatty acids called acetate, butyrate and propionate — have been linked to inflammatory suppression, reduced generation of reactive oxygen species and regulation of apoptosis.

Due to their ability to decrease inflammation, such as after someone has recovered from an illness or infection, probiotics and postbiotics together can be helpful for treating symptoms of IBS and IBD, in addition to many other inflammatory conditions. Some research even shows that  in certain cases when probiotics are not helpful or necessarily safe to give to patients with inflamed GI tissue, “Postbiotics may be a safe alternative for the treatment of patients with IBD in the acute inflammatory phase.” (10)

A recent study done at McMaster University in Canada found that use of postbiotics is associated with reductions in blood sugar levels in obese individuals who have prediabetes. Postbiotics seem to have anti-diabetic effects because they improve the body’s use of insulin. (11) Research suggests that postbiotics’ mechanisms of action include reducing fat inflammation and decreasing liver insulin resistance.

Mice that were injected with the type of postbiotic called muramyl dipeptide experienced reduced adipose (fat) inflammation and reduced glucose intolerance even without losing any weight. Based on the study findings, certain postbiotics are therefore considered to be “insulin sensitizers” with various protective effects in obese or diabetic patients.

5. Well-Tolerated by Those with Suppressed Immune Systems (Including Infants)

Studies have found that probiotics are effective in decreasing necrotizing enterocolitis (NEC), a serious health condition that is one of the leading causes of complications and death in preterm infants. NEC is characterized by intestinal injury and inflammation. It develops in about one out of 10 preterm infants and is considered a medical emergency.

While probiotics are currently considered “the most promising therapy on the horizon for this devastating disease,” researchers are now turning to prebiotics and postbiotics as potential alternatives or adjunctive therapies to probiotics. Probiotic and postbiotic bacteria are essential infants for digestion, absorption, storage of nutrients, development and immunity (just like they are in adults). Some infants cannot tolerate supplementing with live microorganisms (probiotic bacteria) but may respond well to prebiotics and postbiotics.

A 2014 report published in Clinics in Perinatology explains: “The infant/host provides an hospitable, temperature-stable, nutrient-rich environment for bacteria while receiving, in return, benefits from the commensal bacteria.” (12) Postbiotics may help the infant’s intestine protect itself from bacterial pathogens that cause inflammation, encourage the growth of beneficial bacteria, control epithelial immune responses and maintain intestinal homeostasis.

You can also naturally increase your production of postbiotics by including certain foods in your diet, especially those with prebiotics and probiotics (mentioned above). Some of the best food and supplement sources to boost postbiotic concentration include: 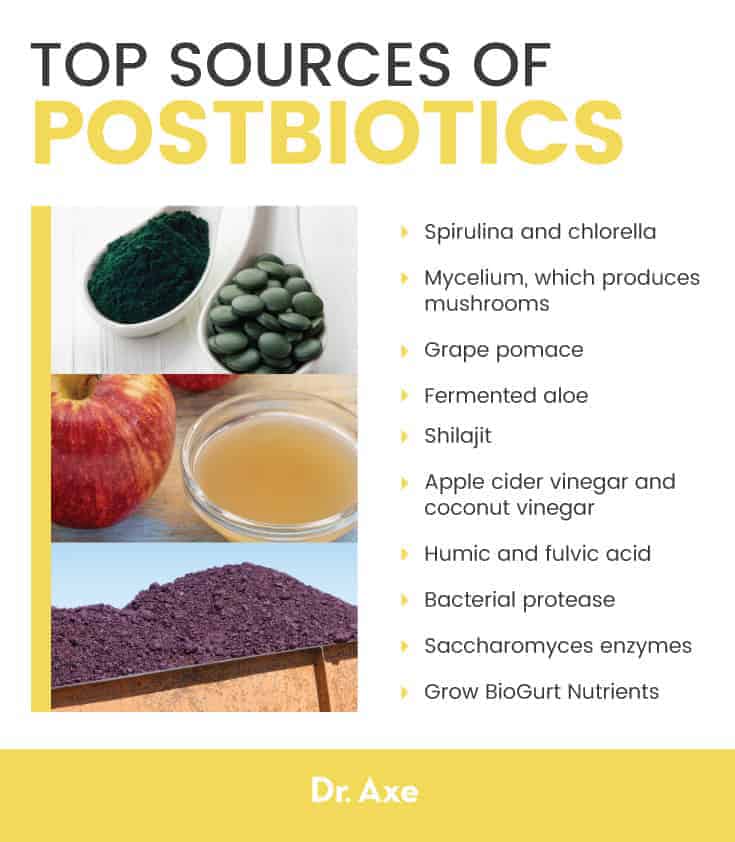 While use of prebiotics, probiotics and postbiotics can certainly make a big difference in terms of improving digestive health and other symptoms, simply taking these in supplement form likely won’t be enough to solve all your problems.

Remember that when it comes to supporting your microbiome and maintaining a healthy gut, keep your eye on the big picture. Eat a nutrient-dense diet, limit or avoid processed foods, and consider other lifestyle changes that you can afford to make in order to better your health.