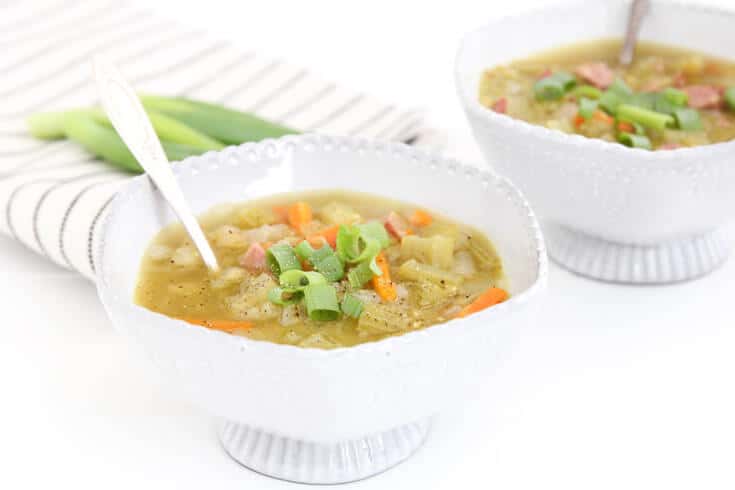 Split pea soup: just the name can conjure up images of bland, sad, overcooked soups made by well-meaning grandmothers or, conversely, the witch in fairy tales. Similar to Brussels sprouts or green beans, split peas have been been given a bad rap due to overboiling, overcooking and underseasoning.

But if you’re ready to transform your views on split pea soup and have a ridiculously easy recipe on hand for those busy nights, you’re in luck. This split pea soup isn’t your grandma’s recipe. This one is loaded with flavor and pantry herbs, packed with yummy ingredients like turkey bacon and requires little work. Plus, it’s super filling — split peas are a super high-fiber food and will keep you feeling full for a long time.

I know the split pea soup name can be a deterrent, but this is one recipe you really can’t knock until you try. In fact, when you serve this dish, leave out the name and see who guesses what it really is! Start by heating coconut oil in a large pot over medium heat, letting it warm up until the oil starts shimmering. Then add in the onion, garlic and celery. Enjoy the fragrance filling up your kitchen and sauté the veggies until the onions soften, about 5–8 minutes. Next, stir in the carrots, split peas, broth, turkey bacon, herbs, bay leaf and salt. Cover the pot and bring all that goodness to a boil. Once it’s bubbling, reduce the heat and let the split pea soup and all that great taste simmer for an hour. When the soup is ready, discard the bay leaf — it adds a ton of flavor while cooking, but you don’t want to nibble on that! — and let the soup rest and cool off for 10 minutes. Top it with freshly sliced green onions when serving.

This split pea soup is one of the easiest soup recipes around. You can also eliminate the turkey bacon to make it vegetarian. I hope you love this modern split pea soup as much as I do.

Have you ever tried making a homemade pumpkin seeds recipe? Not only ...
Read More
Dr. Axe on Facebook 45 Dr. Axe on Twitter 2 Dr. Axe on Instagram Dr. Axe on Google Plus Dr. Axe on Youtube Dr. Axe on Pintrest 134 Share on Email Print Article 181