Turmeric is an ingredient that has been used for thousands of years, both as a culinary staple and medicinal spice. In addition to adding a splash of color to cuisines, turmeric is now commonly found in capsule and tablet forms as well. It can even be brewed up into a soothing tea, allowing you to take advantage of the many turmeric tea benefits, such as boosting the immune system and reducing inflammation, that this delicious spice brings to the table.

There’s a reason why turmeric tea is a popular beverage throughout Asia and is known by some as “liquid gold.” The four simple ingredients in this turmeric tea recipe all work to improve your health, whether it’s by reducing inflammation, aiding digestion, improving the health of your heart or strengthening your bones.

Adding my turmeric tea recipe to your daily health regime can help to restore your body and promote your well-being.

So what is tumeric tea good for, and what are all the benefits of turmeric? Let’s take a closer look at the potential turmeric tea benefits, plus how to make your own at home using a few simple ingredients.

What Is Turmeric Tea?

Turmeric tea is a beverage made using either turmeric root or turmeric powder. The turmeric is steeped in a cup of hot water, which helps boost the flavor and nutrient profile of the final product.

Fresh turmeric tea can also be combined with other ingredients, including pepper, lemon, honey, ginger or ginger water, and more, and it can be made with green tea for an extra antioxidant punch.

Why should you make turmeric tea? There’s a simple one-word answer: inflammation. It’s true that inflammation is at the root of most diseases, and it’s an issue modern medicine typically doesn’t focus on.

Like my turmeric latte recipe, my turmeric tea is made with coconut milk, ghee, honey, black pepper and, well, turmeric. The curcumin present in this popular spice is what makes it a functional food and contributes to the many turmeric benefits.

Not only does it help to fight inflammation that can lead to chronic pain, arthritis, degenerative diseases and digestive disorders, but it also boosts the health of your skin and helps to detoxify the body.

Coconut milk and ghee, two other main ingredients in my turmeric tea, are packed with natural fatty acids that also help to reduce inflammation and work to boost the health of your heart and even help you to lose weight.

Have you given ghee a try yet? It tastes like butter, but it’s “buttier,” with a more intense flavor that’s really satisfying. When mixed with coconut milk, it really creates a creamy, rich and filling tea.

And to add a little sweetness to this tea, I add honey, which is one of the best natural sweeteners because it’s packed with vitamins and minerals and can even promote the health of your digestive tract.

These four super-star ingredients create a healthy and fulfilling turmeric tea that can help keep inflammation at bay and satisfy your taste buds. Is drinking turmeric good for you? Not only is it an easy and effective way to add turmeric to your diet, but it’s also delicious and jam-packed with health benefits.

Here are a few of the top turmeric tea benefits and why you may want to consider adding it to your morning routine.

Curcumin is the active ingredient in turmeric, and it is thought to be responsible for many of the health benefits of turmeric tea. Curcumin has powerful anti-inflammatory properties and has been shown to help decrease markers of inflammation in several in vitro studies.

Not only can this have a huge impact when it  comes to decreasing symptoms of autoimmune disorders, but it may also help protect against the development of chronic conditions, such as heart disease and diabetes.

One of the top benefits of turmeric tea is its ability to reduce joint pain and treat arthritis symptoms. In addition to its anti-inflammatory effects, one review published in the Journal of Medicinal Food also showed that taking 100 milligrams of turmeric extract per day was effective at reducing joint pain associated with arthritis.

Fortunately, there are plenty of resources out there for how to make turmeric tea for arthritis. It’s often combined with other anti-inflammatory ingredients, like ginger, raw honey or cinnamon.

Like green tea and ginger tea, many people use turmeric tea for weight loss, and for good reason. According to one study out of Milan, administering curcumin to people with metabolic syndrome increased weight loss, decreased belly fat and reduced total body fat by up to 8 percent.

Historically, turmeric root tea was also used as an appetite suppressant. It was thought to curb cravings and regulate food intake.

Adding turmeric tea to your daily routine can support healthy immune system function to help ward off infections and support better health. In fact, studies show that curcumin can reduce inflammation and prevent oxidative stress and free radical damage to protect against disease.

There are plenty of turmeric tea recipes for inflammation and immunity, all of which can help provide a hearty dose of antioxidants to optimize overall health by reducing free radical damage.

5. May Have Cancer-Fighting Properties

Although research is limited on the effects of turmeric tea on cancer in humans, there have been plenty of promising in vitro studies and animal models suggesting that it could possess potent cancer-fighting properties.

For example, a paper published in the AAPS Journal actually found that curcumin can modify several cell signaling pathways to kill tumor cells and slow the growth and spread of cancer cells. However, additional research is needed to evaluate the potential turmeric tea benefits for cancer in the general population.

One in vitro study conducted by the Department of Nutrition and Food Science at Auburn University showed that curcumin is effective at lowering blood sugar by modifying the metabolism of glucose. This could potentially help protect against diabetes complications long term.

One animal model published in the journal Atherosclerosis found that supplementing rabbits with turmeric extract decreased levels of “bad” LDL cholesterol and inhibited cholesterol oxidation, both of which are major risk factors for heart disease.

Similarly, a study out of India also suggests that taking a capsule containing curcumin twice daily improves endothelial function and is comparable to atorvastatin in terms of effectiveness, which is a type of medication used to treat high cholesterol and triglyceride levels.

How to Make Turmeric Tea

How much turmeric tea should you drink a day? While the exact dosage can vary based on how you brew your tea or how much is found in your turmeric tea bag, one to two cups per day is a good starting point and can help maximize the potential turmeric tea benefits, while minimizing potential side effects.

There are plenty of recipes available for how to make turmeric tea with fresh turmeric root, as well as turmeric in dried, ground or powdered forms.

Typically, this involves boiling three to four cups of water, adding one to two tablespoons of turmeric and then allowing it to simmer for at least 10 minutes. Next, the tea should be strained and cooled for a few minutes prior to serving.

You can also easily find turmeric tea bags at health food stores, which can be steeped in hot water to brew a simple turmeric tea.

If you’re looking to spice up your cup of tea, there are plenty of turmeric tea recipe ideas out there to help. Experimenting with ingredients like pepper, lemon or honey can make it easier than ever to enjoy the multitude of turmeric tea benefits that are available.

Ginger turmeric tea, in particular, is made by brewing the root of ginger and turmeric tea to boost the anti-inflammatory effects of your beverage. It can also be steeped in green tea for an antioxidant punch.

Turmeric milk tea, also known as golden milk, is another popular drink that is enjoyed for its creamy flavor, rich texture and powerful healing properties.

To make my anti-inflammatory turmeric tea recipe, start by adding one cup of coconut milk and one cup of water into a saucepan and warm the combination for about two minutes. Next, add in the black pepper and 1 teaspoon of turmeric and stir. (The piperine in black pepper can improve the absorption of curcumin.) Warm the mixture for another two minutes.

And your last step is to stir it all together and pour your turmeric tea recipe into glasses. This recipe should make about two cups of tea. And if you want your tea to be a little sweeter, you can add in a little more honey. 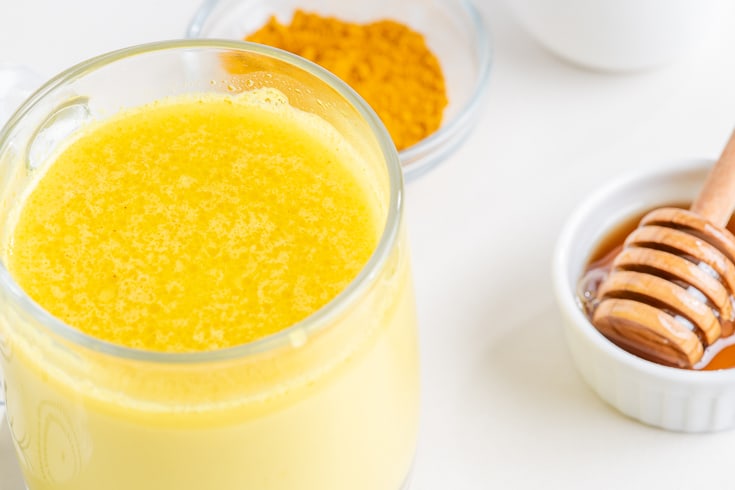 Despite the numerous turmeric tea benefits, there are some people who may need to moderate their intake. In particular, those who are allergic to turmeric should avoid it altogether, as it may cause food allergy symptoms like hives, itching and swelling.

Taking high doses of turmeric powder tea may also be linked to several adverse symptoms. Some of the most common turmeric tea side effects include nausea, diarrhea, decreased blood pressure and a higher risk of bleeding.

Enjoying turmeric tea in moderation as part of a healthy diet is the easiest way to prevent side effects.

Turmeric tea is a popular beverage throughout Asia and is known by some as “liquid gold.” The four simple ingredients in this turmeric tea recipe all work to improve your health.