Typically, a bruise occurs when blood vessels are damaged below the surface of the skin and collect toward the surface as a visible black and blue mark. (1)

A bone bruise happens when some of the fibrous tissues inside the bone, called trabeculae, are damaged. In the case of a bone fracture, all of the trabeculae are damaged, thus causing a break. A bone bruise is a step before a break and can commonly lead to a fracture.

Bone bruises are painful, more so than their skin-derived cousins, and take longer to heal, usually lasting for months. They can result from many incidents, such as sports injuries, car crashes, impacts or twists from falling or other people, arthritis, and more. (2) They’re fairly common injuries. For instance, have you or anyone you know sprained an ankle? Most likely, I presume. Well, 50 percent of those who have sprained ankles have had some type of bone bruise occur. (3)

We all want to be able to heal bruises fast, but it’s important to know that bone bruises generally take time to heal (the length depending on where the bruise is located) — similar to how it takes a while to heal broken bones. However, there are several ways to help expedite that healing and lessen painful through easily obtainable, natural treatments.

Similar to sprained ankle remedies, bone bruises can be treated through diet, supplementation and rest. Here are some of the best natural remedies for a bone bruise.

There are several other remedies one can use to help treat and heal the symptoms of bone bruises. It’s fairly easy to recover from the contusion as long as you’re patient. Remember that time is the biggest remedy in a case like this. However, there are several things you can and should do while the clock ticks away.

For starters, you can try my Homemade Bruise Cream that uses the healing powers arnica, bilberry, comfrey and frankincense.

Arnica oil and other topical arnica products are an excellent choice for bruises of all types, including bone bruises. Arnica is a strong healer and helps bone bruises and the symptoms of bone bruising by reducing swelling and relieving pain.

The biggest factor in healing is rest. When you experience a bone bruise, you must always rest as much as you can and make sure not to put too much stress or pressure on the area. Rest is the most important thing in speed of recovery. While resting, make sure to properly elevate the bone that has been impacted above your heart to promote circulation and reduce swelling.

Icing and the use of poultices on the affected area are other great, easy ways to reduce the inflammation of a bone bruise. Some great choices for a poultice include comfrey, calendula and St. John’s wort. Comfrey is called “knit bone” for its ability to help fractures heal aid new cell growth, so it’s not surprising that it can help a bone bruise heal more quickly. Bone bruises were not diagnosed as such until recently, believe it or not. X-rays don’t show bone contusions, so it was not until MRIs came about that doctors started to see and discuss the term “bone bruise.”

There are three kinds of bone bruises depending on where it occurs on the actual bone. The first type, subperiosteal hematoma, is a bruise that occurs from an impact on that thin tissue on the top of the bone called the periosteum, causing blood to pool below it. It’s the most painful type of bone bruise.

The second kind is called interosseous bruising, where there’s a high compressive impact repeatedly forced on an area that causes damage to the bone marrow. This type of bone bruise is common in an athlete’s knees or elbows.

The third kind of bone bruise is known as a subchondral bruise, which occurs when the cartilage and the bone separate, causing bleeding within the cartilage.

Blood and fluid build up around the bone when certain areas are damaged by impact or wear. A bone bruise is one step below what happens when you have a bone fracture or stress fracture, which is the complete damage and release of the internal trabeculae in a certain bone.

Some of the main causes of bone bruises are sport-related activities. Repeated wear and tear on joints and bones, along with impacts typical in sports, can often lead to bone bruising.

Research has shown that bone bruises are associated with ACL tears, patella dislocations, occult fractures and contusions. For each injury, a unique pattern of bone bruising can be found on MR imaging, which results from the acute trauma. (11) In fact, a pattern with bone bruises in patients suffering ACL tears is acute and problematic. In one study, 80 percent of those who had an ACL tear experienced bone bruising. (12)

Since bone bruises are mostly impact-related injuries, it’s important to wear seat belts, which help reduce injury in car accidents, as well as proper sports protective gear like helmets and padding. Not wearing these protective items greatly increases your risk of bruises to the bone.

Arthritis and osteoarthritis are other risk factors for bone bruising. With these conditions, the cartilage breaks down, as does part of the bone, which leads the bones to grind against each other and be more easily bruised and damaged. (13)

Osteonecrosis is another potential risk factor when it comes to bone bruising. Osteonecrosis disrupts the blood flow to bones, weakening the integrity of the bone itself, thus leaving it more susceptible to bone marrow edema and bone bruises. (14)

The symptoms of bruised bones are similar to other injuries, like regular bruising, sprains, tears or fractures. Because it’s not a soft tissue bruise, the pain is more prominent and lasts longer with a bone bruise.

Here are some more symptoms and facts on a bone bruise: 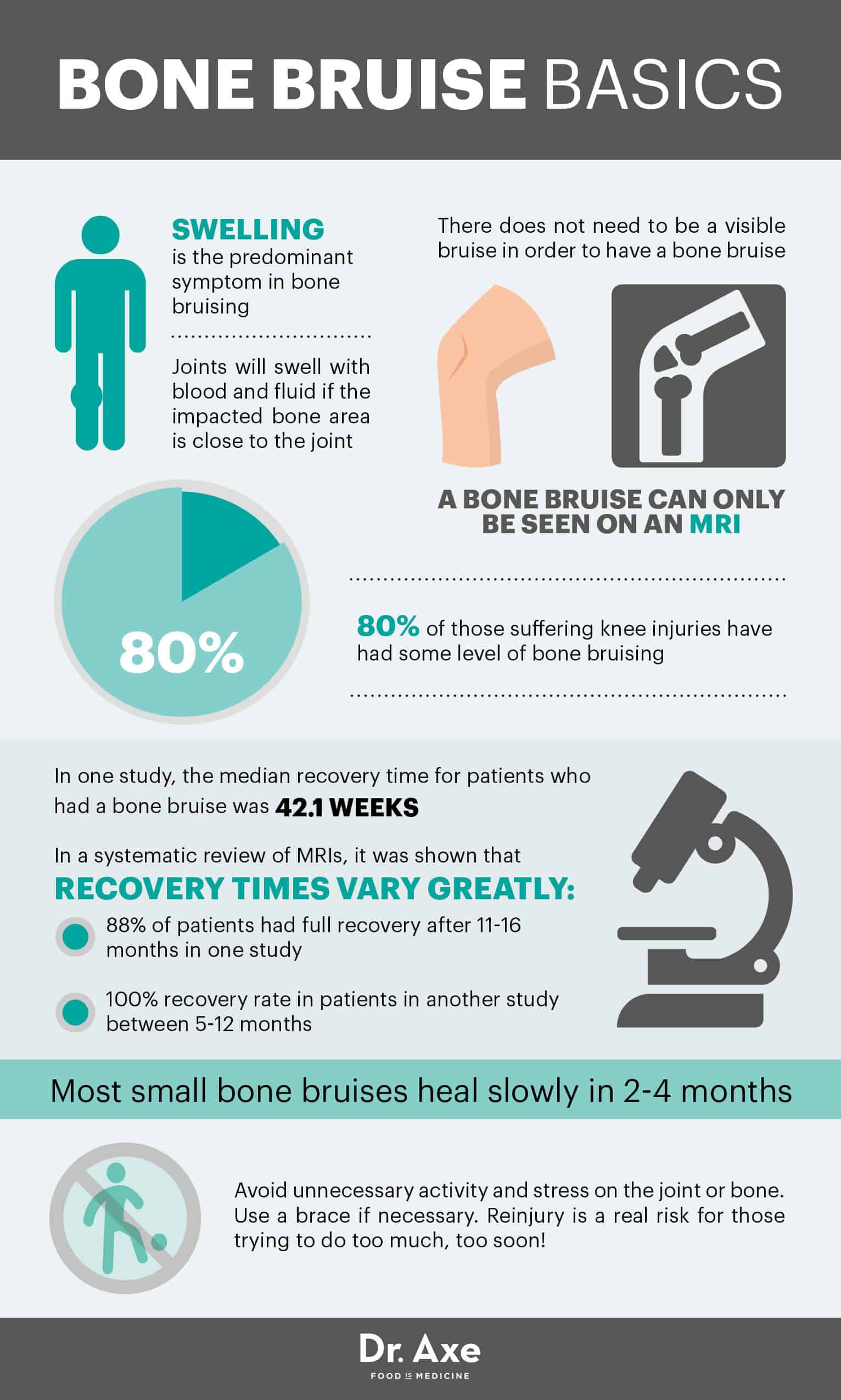 Bone bruises are more serious than your typical bruise, and they take longer to heal. However, there are many natural ways to make the healing process speedier with proper diet, rest, supplements, and the use of therapeutic herbs and essential oils. So keep in the mind the following if you encounter a bone bruise:

Fight Against Diabesity with the Movie BETTER

Red Light Therapy: Does It Work to Boost Overall Health?

Systematic Desensitization Benefits + How to Do It

The National Institute of Mental Health tells us that the most common types ...
Read More
View All

1Benefits of Aunts: Why Aunts May Be Just as Important as Moms
2Diabetes Symptoms to Be Aware Of + 6 Natural Ways to Control
39 Candida Symptoms and 3 Steps to Treat Them
4What Is Adrenal Fatigue? 3 Steps to Overcome Naturally
5Leaky Gut Syndrome: 7 Signs You May Have It
19 Candida Symptoms and 3 Steps to Treat Them
2How to Stop Diarrhea: Causes, Risk Factors and Home Remedies
3How to Get Rid of Herpes Symptoms Naturally
47 Steps to Balance Hormones Naturally
5Top 12 Natural Home Remedies for UTI
Ad